The hospital had undergone several attacks during 2018, the latest of which was on May 2nd

Cover photo: an aspect of the destruction caused to Kafr Zita Hospital in Hama countryside, following an aerial bombardment on May 2, 2018. Photo credit: Hamah Health Directorate.

Preface: Several hospitals and other medical facilities, including the Kafr Zita Specialist Hospital in Hama countryside, have been subjected to violent airstrikes in the context of the military campaign launched by the Syrian regular forces and its allies since October 2017, with the aim to control villages and towns in the countryside of Hama and Idlib[1]. Warplanes believed to be Russian directly targeted Kafr Zita Hospital on May 2, 2018, with two thermobaric missiles, which resulted in the destruction of the hospital and put it out of service and caused the death of one of its stuff members. The same hospital was previously subjected to two consecutive airstrikes, on April 7, 2018, where a warplane believed to be Russian, dropped high-explosive rockets on it causing severe material damage.

According to STJ field researcher, the Kafr Zita hospital has been subjected to repeated attacks by the pro-government forces during 2016, 2017, 2018.  Each time the hospital was rehabilitated, it was attacked again, where on March 7, 2017, it was bombed by warplanes believed to be Russian, which led to its destruction and to be temporarily out of use. In 2016, specifically in November, a military aircraft targeted the hospital with a number of barrel bombs, which resulted to its destruction and to be put out of service.

STJ field researcher has also indicated that the reason behind the military escalation on Kafr Zita town, in the northern countryside of Hama, was its proximity to the areas under the control of the Syrian regular forces such as al-Zulaqiat village and Halfaya town.

The World Health Organization (WHO) warned through its spokesperson, Christian Lindmez, at a press conference held on Friday, March 9, 2018., from the increasing attacks against hospitals and medical facilities in Syria, and said that the Organization had observed a serious escalation in such incidents during the first two months of 2018, where 67 confirmed attacks were recorded in January and February 2018, and that this number constitute more than 50% of the confirmed attacks in 2017, which amounted to 112 attack.

STJ has worked together with Bellingcat and the Syrian Archive on a joint report titled "After Six Months! Health Facilities under Fire", the report documented the exposure of four hospitals in Idlib province to aerial bombardments during the period from 3 to 5 January 2018.
STJ also prepared a further report entitled "Attacking Medical Facilities in Rural Idlib Deprives Tens of Thousands Residents from Medical Services", a special report documenting the targeting of "Sham Hospital" in Hass and the "Blood Bank" in Saraqib during February 2018.

The Specialized Hospital, located to the west of Kafr Zita[2] , in rural Hama, is the only one of its kind in that area, it provides services for about (50) thousand inhabitants of Kafr Zita and surrounding areas. The hospital has a number of departments, for children, women, internal medicine, and other specialties, and it has a staff which consist of doctors, section chiefs, nurses and workers. Many civilians visit this hospital to receive treatment of all kinds on a daily basis.

On May 2, 2015, warplanes believed to be Russian bombed the Kafr Zita hospital directly, causing massive destruction and put it completely out of service, according to the hospital manager, "Mazen al-A’araj", who spoke to STJ in this regard saying:

"I was at the hospital when a Russian warplane directly targeted it with two raids using thermobaric rockets at 10:00 a.m., which resulted in the death of a nurse named “Fatima Muhammad Jamil al-Hamsho” and the injury of a number of hospital staff members and patients. The attack also caused the total destruction of large parts of the hospital, which led it to be out of service. It is worth mentioning that the hospital had been working on a contingency plan, since it was targeted twice during April 2018. Therefore, we call on the international community and sponsoring organizations to shoulder their responsibilities towards targeting the medical facilities, which are free of any military presence.”

An image shows a side of the destruction caused to Kafr Zita hospital, following the aerial bombardment of May 2, 2018. Photo credit: Hama Health Directorate.

A screenshot taken from one of the above-mentioned footages shows the moment of targeting Kafr Zita Hospital in Hama countryside on May 2, 2018.

It was not the first time the Kafr Zita hospital been bombed, where on April 7, 2018, it was targeted by warplanes, believed to be Russian as well, which fired several highly explosive rockets causing the destruction of large portions of the hospital, and the injury of some patients, as well as the damage of the hospital's medical equipment. That was confirmed by "Hassan al-A’araj", the information officer at the hospital, where he said:

"At 10:30 p.m. on Saturday, April 7, 2018, a Russian warplane was observed in Kafr Zita sky which after several minutes conducted two raids on the hospital, which caused the destruction of large portions of it, as well as the damage of the laboratory equipment, but fortunately no injuries were recorded among the civilians or the hospital staff due to the contingency plan, which the hospital management promoted, following the consecutive targeting of the hospital, as it replaced the full-time work with shift system to reduce the number of workers present at the hospital at the same time, to reduce causalities in case the hospital had been attacked.

The Kafr Zita hospital had been targeted four times during March and February 2018, with different weapons such as incendiary napalm and thermobaric rockets. The attacks were frequent, which made it difficult for the administration to rehabilitate and reactivate the hospital, which also was sometimes targeted by artillery shells by regime forces located in nearby areas."

"Fadl Ma'aeouf", an anesthesiologist at Kfar Zita Hospital, gave STJ a further testimony where he said that he was at the hospital when it was violently attacked on Saturday evening, April 7, 2018. In this regard, he continued:

“I was at the hospital with a number of fellow doctors when the attack occurred at 10:30 p.m., we heard a powerful explosion that shook the entire hospital. It was found that the hospital was been targeted with a concussion missile, which destroyed the roof and walls of the hospital and caused the damage of most of the medical equipment, thank God no causalities was recorded due to the contingency plan.”

Ma'aeouf said that the attack spread terror and panic among the medical staff and the patients as well, which led them to take refuge in a room. Just moments later, the warplane returned and targeted the hospital with another concussion missile, He added:

“We rushed to evacuate patients, there were very difficult moments as we transferred patients by motorcycles with lights turned off to not to be spotted by the warplanes again. The next morning, losses in the hospital were detected, it had been severely damaged, the workers tried to reconstruct as much as possible in order to put it in service again, as it is the only hospital in the northern countryside of Hama province which provides treatment to a large number of patients.” 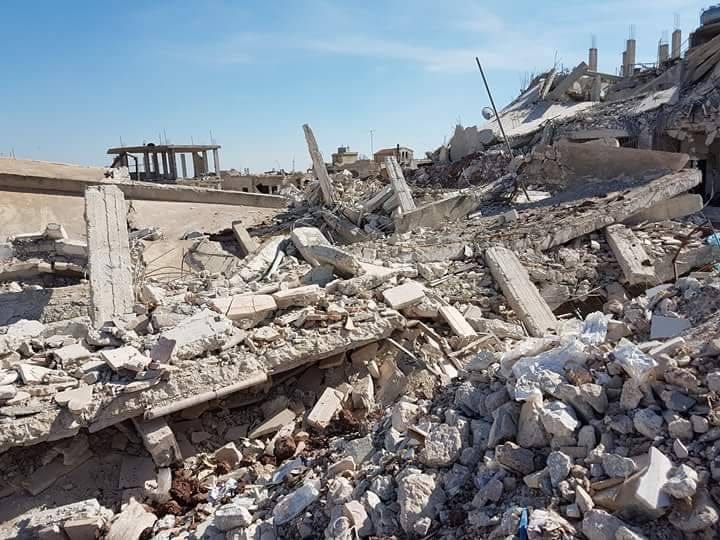 "Nidal Qattan", a worker at Kafr Zita Hospital, told STJ that the time interval between the two raids carried out by the warplanes was very short, noting that the first raid caused a complete blackout in the hospital, while the second caused its destruction and put it completely out of service. Pointing out that the hospital workers reconstructed it in spite of the enormous material damage.

[2] Kafr Zita town is controlled by Jaysh al-Izza, which is one of the most active military formations in the northern countryside of Hama. It was formed in mid-2014 and has waged many battles against the Syrian regular forces. The Ltamenah village, from where the Commander-in-Chief of the army “Jamil al-Saleh” hails, is one of its most important headquarters.