Deaths in al-Hawl Refugee Camp after the Outbreak of Typhoid

By the Beginning of April 2018, 24 Deaths of Typhoid were Recorded in the Camp, mostly Women and Children, Besides 269 Infections 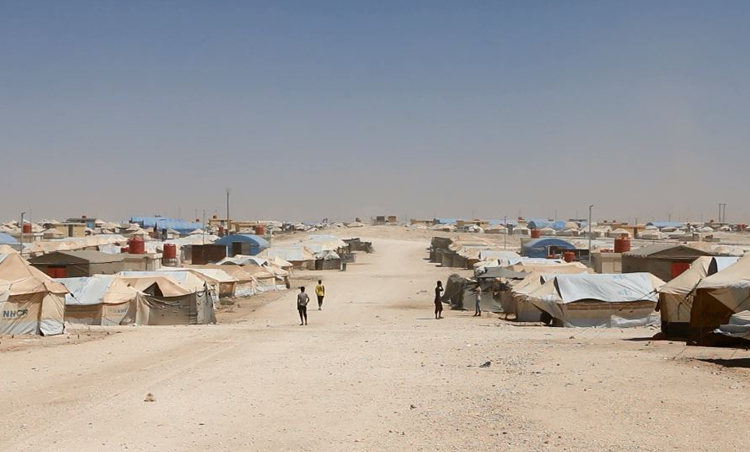 Preface:  Thousands of internally displaced persons in al-Hawl Refugee Camp, east of Al-Hasakah city, face a risk of “typhoid fever“, which is a fatal disease, after its noticeable spread within the camp. Nearly 24 camp resident dead of typhoid, mostly women and children, and 269 others showed symptoms during March 2018, according to several testimonies obtained by STJ.

“Typhoid fever is a life-threatening infection caused by the bacterium Salmonella Typhi. It is usually spread through contaminated food or water. Symptoms include prolonged fever, fatigue, headache, nausea, abdominal pain, and constipation or diarrhoea. Some patients may have a rash. Severe cases may lead to serious complications or even death. Typhoid fever can be treated with antibiotics although increasing resistance to different types of antibiotics is making treatment more complicated. Even when the symptoms go away, people may still be carrying typhoid bacteria, meaning they can spread it to others through their faeces[1].”

According to STJ field researcher, the al-Hawl Refugee Camp has a single health center, which only provides first aid services, such as examining patients and giving them painkillers. Noting that most of the center’s medical staff members are volunteers and have not worked in the health field before, except the doctor supervising the center

STJ had earlier prepared a report entitled “Cold and Shortage of Medical Services Cause Death of Three Children in Mabrouka Camp, The Camp Contains Up To 8,000 Displaced from Deir az-Zor and Raqqa”. The organization has also prepared a Fact Sheet on Camps for “the Internally Displaced” Located in Autonomous-Administered Areas in Northern Syria.

Image shows some patients from al-Hawl Refugee Camp gathering by the health center of the camp. Taken on April 3, 2018Photo credit: STJ

The “al-Hawl Refugee Camp” located east of Al-Hasakah, 45 km away, that it is actually affiliated to the town of al-Hawl, which administratively subordinated to Al-Hasakah province. In early 1991, at the time of the Gulf War, the United Nations High Commissioner for Refugees (UNHCR) established the “al-Hawl camp” on the southern outskirts of al-Hawl town, which was then managed in coordination with the Syrian government. In the aftermath of the 2003 Iraq War, it was reopened to receive the refugees and escapees from the fighting there.

In 2013, the camp went completely out of service after the control of the Islamic State “also known as ISIL”, on al-Hawl town.
On November 13, 2015, the Syrian Democratic Forces managed to control al-Hawl town, where the camp was reopened on April 21, 2016, especially because of the outbreak of hostilities between Iraqi forces and its militias against ISIL.

By the end of 2017, the Autonomous Administration deported a number of Iraqi families to camps inside Iraq equipped by the Iraqi government. This led to a decrease in the number of inhabitants of the camp to 17,000 divided between 4, 000 internally displaced Syrians and 13,000 Iraqi refugees.

The first death in the camp’s dispensary, managed by the Kurdish Red Crescent, was recorded on March 18, 2018, where a (7) year girl had suffered a fever which the doctors could not reduce, and that led to her subsequent death, according to the diagnosis of the doctor supervising the dispensary.

According to a medical source from inside the camp, the death of the girl child was a dilemma for medical staff at the clinic, as they were not trained to receive such cases, noting that one of the employees told them that the symptoms that the child showed were of “typhoid fever”, but the doctor supervising the dispensary never cared

The same source indicated that, on March 20, 2018, the dispensary received 6 cases similar to that of the deceased girl child, noting that all cases were to children, specifically from the age of 4-6 years, two of whom were died immediately, while the four others remained deplorable

The source also stated that, as of March 24, 2018, the number of deaths due to such symptoms had reached 17, mostly children who have not yet reached the age of 8, adding that no preventive measures against diseases were taken by the camp management

Abu-Mulham, a title of an Iraqi refugee residing in the al-Hawl camp, had lost his 6-year-old daughter to typhoid in February 2018. In this regard, he spoke to STJ saying:

“On February 16, 2018, my daughter got a diarrhea with fever, immediately I rushed her to the dispensary, where the doctor gave her a painkiller and antipyretic, but the symptoms persisted, and her situation worsened, where she got a rash. On March 23, 2018, my daughter’s temperature elevated during the night, so I tried to get to the infirmary’s management, but the guards told me that I had to come in the morning, or they will arrest me, since the clock was near 2.00AM.”

Abu-Mulham continued that the condition of his girl child began to worsen gradually with the early morning hours, until she finally passed and transferred to the medical clinic, noting that he buried her body inside the al-Hawl camp, since the camp administration did not allow him to go out and the Iraqi government refused to settle him.

(Sumayya Kh.), a displaced woman from Deir ez-Zur, lost her son to the same disease, as she has been living in the camp since January 1, 2018. In this regard, she spoke to STJ, saying

On March 1, 2018, my 8-year-old son got a high fever and diarrhea, the doctor at the infirmary gave him constipation drugs and sedatives, but his condition grew worse every day, as he lost a lot of weight because of fever. He still like this until March 11, 2018, when a doctor secretly told me that the symptoms he showed was for “typhoid fever”, and that I have to ask permission from Camp management to allow me treating him outside the camp.

However, when I requested that from the administration, they asked me for a guarantor, but if I had one I would have left the camp a long time ago. While I was at the application office, I ran across a man who offered me to pay 200, 000 Syrian pounds for treating my son outside the camp. He assured me that there was no other way except this, but I didn’t have that kind of money. On March 19, 2018, my child died, and we buried him in al-Hawl camp, after our request to bury him in one of Al-Hasakah cemeteries was denied.”

A medical source confirmed to STJ that, the number of people who showed symptoms of “typhoid fever” has reached 269 by the beginning of April 2018, mostly women and children. He said that what caused the disease to spread was likely the lack of humanitarian and local organizations’ control of the water entering the camp, which must be monitored by the camp management at the very least and to make sure it is safe and drinkable, pointing out that some of those who had symptoms confirmed to the medical teams that the potable water in the tanks was smelling foul during February 2018.

The source also stated that the number of deaths due to the disease within the al-Hawl camp had reached 24, as of April 1, 2018, noting that no action had been taken in this regard by the humanitarian organizations or the camp management of Autonomous Administration.

Image shows an aspect of the spread of garbage and dirt inside the al-Hawl camp.