Image shows the remnants of one of the rockets loaded with incendiary substances that landed on Hamoryah on February 22, 2018. Photo credit: STJ

Preface: Eastern Ghouta cities and towns have been subjected to one of the heaviest military campaigns[1] launched by the Syrian regular forces and their allies since February 18, 2018. These areas were bombarded with various types of weapons, being warplanes, helicopters or heavy artillery; all was interspersed with rockets loaded with incendiary materials (similar to incendiary phosphorous), which had been fired through rocket launchers. According to several sources, the rockets had been launched probably from the Syrian regime-held Hosh Nasri area, located on the northeast part of Eastern Ghouta.

A map illustrates the places of control in Eastern Ghouta and the probable location where the rockets fired from in Hosh Nasri area.

On 23 and 22 February 2018, Hamoryah was shelled by several rockets loaded with incendiary substances causing burning of homes and properties of many civilians.

On 23 and 22 February 2018, Saqba as well was shelled by rockets loaded with incendiary materials causing fires in civilian houses and injuring one of them.

According to Syrians for Truth and Justice/STJ’s field researcher, many civilians have been sheltering in the cellars since the beginning of the fierce military campaign against Eastern Ghouta, thus reducing the number of civilian casualties and making the majority of Eastern Ghouta cities and towns more like ghost towns because they turned into an almost empty places of civilians who are fearful of leaving the cellars since the Syrian regular forces are targeting anyone who walks on the ground.  The researcher also pointed out that many areas in Eastern Ghouta changed their features given the extensive shelling they had undergone; he explained that there are residential buildings that had been razed to the ground completely.

The UN Security Council adopted resolution No. 2401 amid a welcome from the United Nations, which called for the cessation of hostilities throughout Syria in a minimum of 30 consecutive days to enable the delivery of humanitarian assistance and the provision of medical evacuation services to the patients and the injured. The United Nations Office for the Coordination of Humanitarian Affairs (OCHA) has described the situation in Syria as “bleak” despite the UN Security Council’s resolution calling for a 30-day ceasefire throughout the country.

STJ had earlier prepared a report entitled "As If It’s Doomsday", in order to shed light on the recent massacres committed in Eastern Ghouta, due to the recent military campaign. STJ had also previously published a further report documenting the occurrence of Three Consecutive Attacks with Incendiary Substances on Residential Neighborhoods of Harasta City in late January 2018.

First: Fires in the Skies of Hamoryah Following Shelling it with Incendiary Substances Similar to phosphorous:

On February 23, 2018, several towns and cities in Eastern Ghouta, such as Irbin, Hazzeh and Saqba, were bombarded by rockets loaded with incendiary substances (similar to phosphorous); the city of Hamoryah had the largest share of the shelling, as confirmed by Mohammed Jawad, a media activist in Hamoryah, he said:

"At 10:00 pm, three rockets fell on Hamoryah all at once, and these rockets were mixed with other explosive rockets launched simultaneously by the regime from rocket launchers. The three rockets fell amidst places known to be densely populated, such as the vicinity of al-Rawdah Street located in Hamoryah, and they were launching explosions in the sky as if they were fireworks."

Mohammed said the recent military campaign by Syrian regular forces on Eastern Ghouta prompted many locals to leave their homes and take the cellars as a safe shelter, making Hamoryah more like a ghost town. In this regard, he added:

"We no longer see the sun light; light has become a kind of luxury for all the people. However, sheltering in the cellars have contributed to reducing the occurrence of injuries among the residents, in particular after shelling Hamoryah by rockets loaded with incendiary substances. On the other hand, the shelling caused three houses to be burnt, and the Civil Defense teams were unable to reach the area and extinguish the fires, as they left them until they were extinguished alone. Notably, the ambulance and fire staff are no longer out except for the utmost necessity because the regime argets anything walks on the ground."

A day earlier, February 22, 2018, Hamoryah was also shelled with the same type of rockets, as approximately five rockets loaded with incendiary substances targeted civilian houses. In this regard, Mohammed continued:

“At exactly 9:00 p.m., the city was targeted by five rockets loaded with incendiary substances that had been released through a “launcher” as well, causing burning of six houses which we were unable to extinguish. Moreover, the skies of Hamoryah lit up from the intensity of some fires that broke out because of this bombardment, but it extinguished on its own after devouring as many houses as possible.”

Image shows the remnants of one of the rockets loaded with incendiary substances that landed on Hamoryah on February 22, 2018. Photo credit: STJ

An image shows one of the rockets loaded with incendiary substances that fell on Hamoryah on February22, 2018. Photo credit: STJ 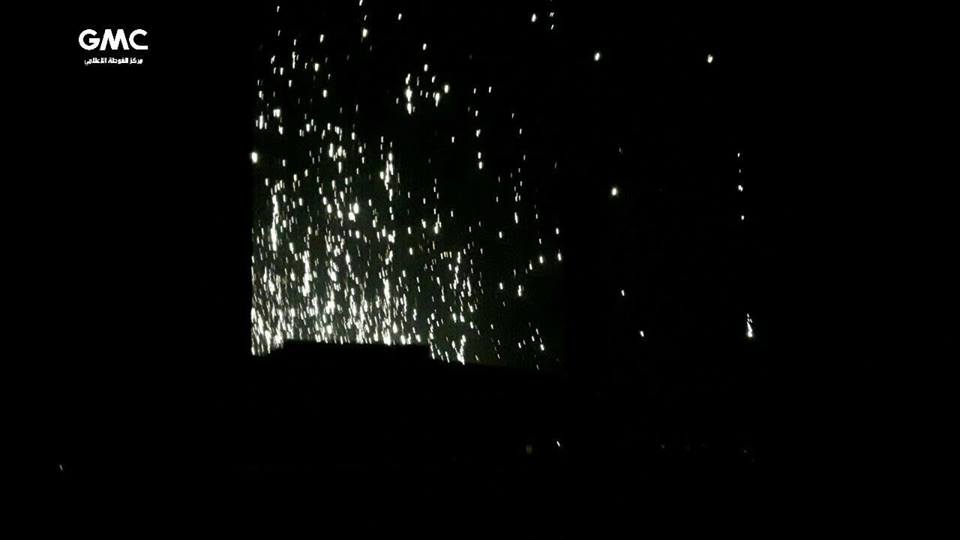 A video footage posted the Unified Media Office of Irbin showed the moments of shelling the city with incendiary substances similar to incendiary phosphorous on February 23, 2018. 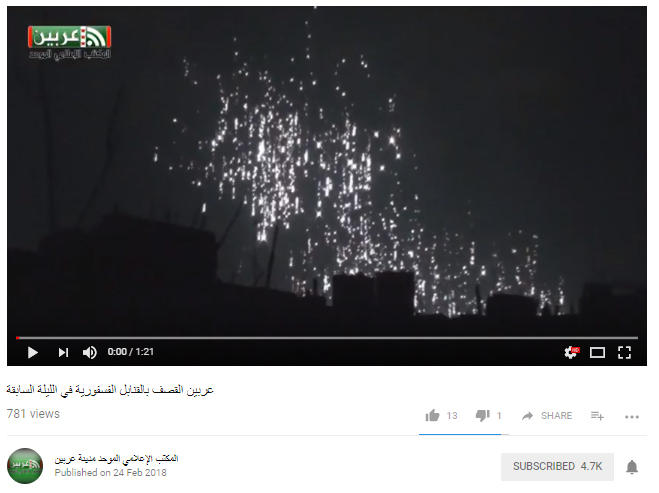 An image taken from the video footage, published by the Unified Media Office in Irbin, shows shelling Irbin with incendiary substances on February 23, 2018.

Image shows some of the burning houses in Hamoryah city after bombarding them by rockets loaded with incendiary substances. Photo credit: Hamoryah Media Office.

A video footage published by the Syrian Civil Defense on February 22, 2018, showed the moment of targeting Hamoryah by a rocket loaded with incendiary materials. 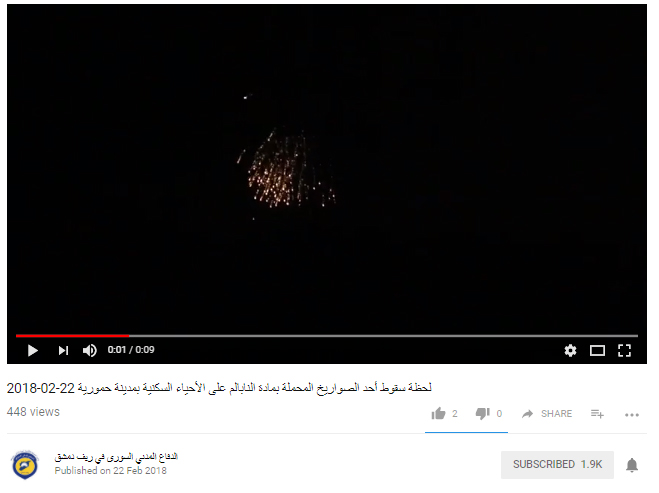 Image taken from the video footage published by the Syrian Civil Defense.

An image showed what claimed to be one of the capsules containing incendiary substances loaded with rockets fired on the cities and towns of Eastern Ghouta on February 23, 2018. Photo credit: Ghouta Media Centre.

Saqba did not also spare from the shelling by rockets loaded with incendiary substances. On February 23, 2018, five rockets of this type targeted the town; they were exploding in the air and then emitting huge pyrotechnic blocks; Omar Abu al-Jud, who hails from Saqba, confirmed this. He said:

"At 1100 pm, five rockets loaded with incendiary materials targeted the town, fell  on an area called Ma’sarat al-Zait which means “the oil press” and caused fires to break out in two houses within the town, in addition to burns in the leg of a civilian. However, the damage was mitigated by the fact that most of the people were sheltering in the cellars and the streets were completely free of civilians, and most of the pyrotechnic blocs fell on the streets and squares."

Saqba had been bombed with this type of rocket just a day earlier. At 9:00 p.m. on February22, 2018, the town was targeted by three rockets loaded with incendiary substances, falling on the areas of al-Jameiya Square and ar-Raya Square, consequently, three houses burned, Abu al-Jud added; he explained as well that no one was able to go to the fires location to extinguish them because other explosive rockets were falling into the area at the same time.

"Mohammed al-Shami, a military officer in the Syrian armed opposition factions, spoke to STJ, about the quality of rockets loaded with incendiary substances, in which Eastern Ghouta was recently targeted with, and said:

"These rockets are equipped with a warhead; each single rocket contains 180 hexagonal incendiary devices. These rockets are fired from a launcher type (BM-21); the manufacture of these rockets dates back to the 1970s, during the Soviet era, and often carries two types of detonators, either to explode immediately after colliding with the ground, or that it explodes before even reaching the ground, thus allows a greater spread of incendiary elements. The weapon is designed to ignite large fires in crops and combustible materials."

An image shows the places of the capsules containing incendiary materials inside the rocket.

Photo credit: Mohammed al-Shami, the witness who provided the image

[1] On February 17, 2018, the Syrian regular forces and their militias mobilized a very large number of machines and soldiers at several points adjacent to Eastern Ghouta. According to military sources, the mobilization was as part of preparations for military operations in which the "Tiger forces", affiliated to Soheil al-Hasan, are involved in order to control the entire Eastern Ghouta area. This campaign began with an intensive bombardment as of February 18, 2018, by either warplanes, helicopters, or heavy artillery, leaving up to 400 casualties since the beginning of the campaign until this day, according to STJ’s field researcher.