Preface: On the other hand, many trapped patients in Eastern Ghouta are still waiting, hoping to be evacuated for treatment in Damascus hospitals, particularly with the intensification of the siege, imposed on them by Syrian regular forces, and preventing access of humanitarian aid and medicine. According to STJ field researcher, at least five new deaths were recorded during the period of late December 2017 till February 5, 2018. Anyway, suffering of those patients grew following the failure of the cease-fire agreement, which was announced on January 26, 2018, after negotiations in Vienna, between representatives of Syrian government forces and the Syrian opposition.

First: Suffering of Patients who were Evacuated for Treatment in Damascus Hospitals Continues

According to a report STJ prepared it earlier, an agreement reached between Army of Islam and Syrian regular forces, in late December 2017, to evacuate (29) patients from Eastern Ghouta for treatment in Damascus city hospitals, the evacuation was exchange for releasing (29) detained by Army of Islam, whom had been detained in military operations in various areas around Damascus, particularly in the area of Adra.

The evacuation took place on three batches, beginning on  December 26, 2017 and ending on  December 28, 2017, included (29) urgent cases, the process allowed the escorts of patients to go out with them too.

Bassam Khaled Qazaq, 40, was on the waiting list to evacuate from Eastern Ghouta; he had cancer, but died before the agreement, specifically on December 1, 2017. The same case was the child Imad al-Mohammad, died two months before the evacuation, while more than 600 others were still waiting to be evacuated. Anyway, humanitarian and United Nations organizations were not able to find any solution to their situation.

According to STJ field researcher patients, who had been evacuated in the last exchange deal, deployed to two hospitals in Damascus, Al-Mujtahid Hospital and Ibn Al Nafees Hospital. As for  quality and seriousness of treating them, neither the patients ' escorts nor the Eastern Ghouta doctors were able to assess the effectiveness due to high concealed of the medical staff in those hospitals, all information about the diagnosis of the case, the quality of treatment and the required duration was capped, as companions and relatives of the evacuated patients reported to STJ, that most patients, including those whose health deteriorated after evacuation, did not improved, all of that called into question.

Many of patient escorts told STJ that they were treated in a way similar to detention centers treating starting from preventing them from wandering in the city or making visits outside the hospital, in addition to holding their personal cards by hospital security elements, then obliging both the patient and his companion to return to Eastern Ghouta, following the end of the treatment period and preventing them to stay in Damascus or leaving to another country.

Firas`s mother/Um Firass, a relative of one of the patients who was evacuated in the third batch of 13 patients on December 28, 2017, and in this regard she spoke to STJ, saying

"My cousin is in the early fifteens, she suffers from heart disease and blood pressure, so she was taken out through Syrian Red Crescent. However, I learned, by communicating with her, that all the patients who had been removed were placed either at Al-Mujtahid Hospital or Ibn Al Nafees Hospital where they received treatment similar to detention centers treatment. As for patients, we don't know how serious is the treatment they receive, because they take a blood sample from my cousin every day for medical checkups, without knowing what kind of tests are they, nor the purpose, and even when the patient's companion ask the medical staff of doctors or nurses about the patient's condition, he/she receives no answer, no one knows anything about the diagnosis of the disease or the nature of the therapy they receive, or even if their states improve or decline, and we do not know when they will be discharged from the hospital either."

Um Firas added that the escorts of the patients were not allowed to leave the hospital or visit their relatives in Damascus, or even to buy some goods from the market, as they were bound by a daily system imposed on them by the hospital's officials, she continued:

"My sick cousin tried to prepare her official travel papers to travel outside the country, but the official authorities did not allow her to do so and informed her that she was obliged to return to Eastern Ghouta with the patient accompanied him/her when the treatment period is over. She was also prevented from acquiring anything that she may need when they return to Eastern Ghouta including some medicines, and I see that treatment has not changed the state of the patients, but on the contrary, it has worsened their situation."

According to STJ reporter, two patients, who had been evacuated to Damascus hospitals, died in January 2018, during treatment and without knowing the details of the death incident or the cause of their health deterioration, their names are the child (Moutaz Natoor, one year old, suffered from a "transitional tumor  rectum" and needed a "Radiotherapy and Chemotherapy", the other, Ahmed Issa ,50, suffered from "Bone and Lung Metastases", according to Dr. Wissam Al-Rez, director of Dar al-Rahma Oncology Center in Eastern Ghouta.

Second: Increase in the Number of Deaths with Continuing the Siege on Eastern Ghouta

With passing more time, suffering of many chronic-ill in Eastern Ghouta has worsened and prolonged to unspecific time. That suffering accompanied with the continued suffocating siege imposed by the Syrian regular forces on civilians there. Anyway,  as the tight siege continues, number of deaths, among patients increases too, up to five new deaths were recorded during the period from late December 2017 to  February 5, 2018, including two cases of cancer ill, they were Hadya Ryhan, died on January 24, 2018, and the girl child Umama Darwish, died on  January 31, 2018, in addition to the girl child Baraa, who suffered from malnutrition, died on the same date, and the girl child Fatima, died of tuberculosis on  February 5, 2018, the child Ubida Mufeed Nassan, died on February 8, 2018, after suffering from bacterial disease and lack of the necessary treatment, Bassema, 35, died on  February 11, 2018, due to severe tumor, according to Dar al-Rahma Medical Center for Oncological treatment.

Image of the child Fatima died of tuberculosis on February 5, 2018.
Photo credit: one of the Eastern Ghouta doctors.

Um Salim, the mother of a patient who is still waiting evacuation from Eastern Ghouta, spoke to STJ saying:

"My son was suffering from pain in vertebrae and when he did medical examination, it turned out that he had “disc”, later he underwent a surgical operation in Eastern Ghouta and during the operation, it turned out that he needed a joint, which was not available in al-Ghouta.  So the doctor had to stop the operation that worsened his condition more. After that, due to non-completion of surgical work, lack of joints and inability to evacuate him for treatment, he was paralyzed and became disabled; my son is the sole breadwinner for the family."

News circulated, between media means, concerning evacuating 700 medical cases from Eastern Ghouta during January 2018, but Damascus and its countryside Health Directorate quickly denied the news, stressing that it continues its endeavor for removing them through communication with international organizations but has not received a response so far, The Directorate issued an official statement on January 23, 2018 concerning this issue.

Amidst worsening the humanitarian situation in Eastern Ghouta, a cease-fire truce was reached in Eastern Ghouta on January 26, 2018, through negotiations took place in Vienna between representatives of the Syrian opposition and regular government forces. Anyway, the agreement contained, cease fire and introduction aid, in addition to allowing the humanitarian cases to get out. Failaq Al-Rahman suspended its consent on a condition of access humanitarian aid to Eastern Ghouta within (24-48) hours, and in case Syrian regular forces didn’t commit, the agreement is null and void. Wael Alwan, spokesperson for Failaq Al-Rahman, declared that the "mediator" informed them about Russians agreement on the condition of introduction humanitarian aid and that the truce will start at midnight on 26 January February 2018, according to the special statement of Ghouta Media Centre. 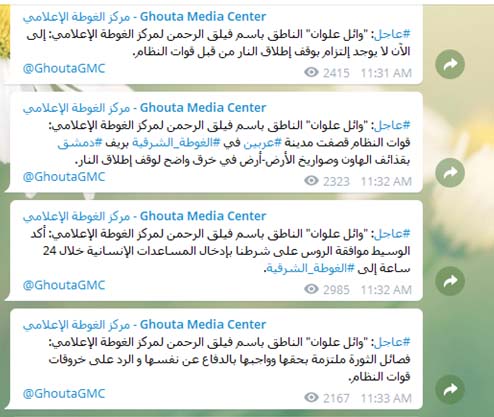 Ahrar al-Sham al-Islamya Movement, through the military room of Thy Were Wronged, stated that they had not been contacted and they are not bound by an agreement to which they were not a party.

statement issued by Ahara al-sham Islamya movement through the "They Were Wronged" operations room on  January 27, 2018, in which it assured its  position on the Vienna agreement.
Photo credit:  Operation room of They Were Wronged.

It was just hours after the truce, the Army of Islam and  Failaq al-Rahman declared that the truce failed because of the continued shelling and the lack of seriousness from Syrian regular forces  side and its Russian ally concerning the agreement. "Wael Alwan", the spokesperson for Failaq al-Rahman, confirmed that, according to the official website of Failaq al-Rahman, Ten hours after starting truce, Syrian regular forces didn’t show any commitment on the ground, while Mohammed al-Oush, the head of the political commission of Army of Islam stated via his Twitter account that Russia failed to implement the truce, and that the rockets still bombard Eastern Ghouta. 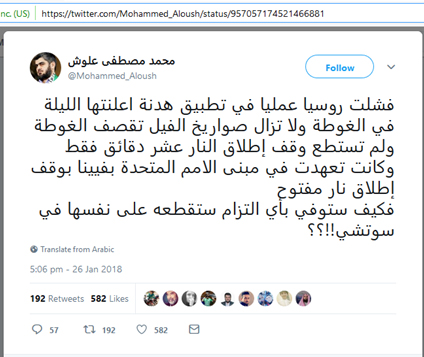 Damascus countryside province Council issued a statement on January 28, 2018, confirming that Syrian regular forces had not adhered to the truce that had been reached in Vienna and they shelled civilians in Eastern Ghouta causing a number of deaths and injuries among them.

With the failure of the recent ceasefire agreement, the humanitarian issue in Eastern Ghouta remains one of the most outstanding issues that international organizations have not been able to resolve, the matter that confirmed by Dr. Wissam Al-Rez, director of Dar al-Rahma Centre for Oncology treatment in Eastern Ghouta, who spoke to STJ about the obstacles of treating cancer patients, and that the international society hold the responsibility of deterioration of the humanitarian situation in Eastern Ghouta, she said:

"We had (1256) medical cases in the Oncology Centre recorded from the beginning of the siege to January 24, 2018, including 620 cases in urgent need of treatment and (50) cases in need of emergency evacuation, and 39 cases of death on the waiting list, the last was Hadya Basil, died on January 24, 2018, (Umama Darwish), died on January 31, 2018. Despite all our pleas and appeals, stakeholders did not respond to our demands and we were able to evacuate just 29 medical cases through the exchange deal between the Army of Islam and Syrian regime, including eight oncological patients, four children and four adults, two died without knowing the details of their treatment. However, we cannot secure treatment for more than 5% of the patients due to lack of medicine in al-Rahma centre."

Syria/Libya: Complaint to the UN Working Group on...