Image of an unexploded cluster munition that fell on the residential neighborhoods in Duma on February 2, 2018. Photo credit: Duma Coordination

Preface: The Syrian-Russian alliance continued its military escalation in most cities and towns in Eastern Ghouta, in conjunction with the announcement of “Ahrar al-sham al-Islamiyya’ the start of the third stage of the battle "They Were Wronged[1]" on January 28, 2018. On February 2, 2018, cities and towns in (Mesraba, Duma[2], Hamorya, Beit Sawa, Irbin and Madyara[3]) were hit by ground-to-ground missiles loaded with cluster munitions. According to Syrians for Truth and Justice/STJ reporter, the residential neighborhoods in these areas have been targeted with 14 missiles loaded with cluster munitions in the same day, causing several civilian casualties, including children, as well as material damage to the property.

It is noteworthy that these are the first attacks when cluster munitions have been used since the beginning of 2018. However, the regular forces have already used cluster munitions on number cities and towns of eastern Ghouta in 2017, according to a report prepared by STJ.

Most submunitions are intended to explode on impact. The vast majority are free-falling, meaning that they are not individually guided towards a target.

Cluster munitions were first used in World War II and a large proportion of currently stockpiled cluster munitions were designed for context of the Cold War. Their main purpose was to destroy multiple military targets dispersed over a wide area, such as tank or infantry formations, and to kill or injure combatants.[4]”

"The majority of cluster munitions do not explode as intended but remain a threat to life until they are moved. It is more dangerous for civilians because of the vast area (known as "suspicious spots") that cluster bombs from a single munition can cover.[5]"

118 states prohibit the use of cluster munitions because of the damage they cause during the attack, but neither the Syrian nor the Russian governments acceded to the Convention on Cluster Munitions, which comprehensively bans the use, production, stockpiling or transferring cluster munitions. It also prohibits States parties from assisting, encouraging or urging any person to engage in any prohibited activity under the Convention.

“Cluster munitions are inherently indiscriminate weapons; therefore, they should be prohibited in any circumstances. Each cluster bomb spreads dozens of small grenades over a larger area than a soccer field. Given the high rates of failing to explode, they pose a threat to the lives of civilians for next years. The repeated use of unguided bombs near the densely populated civilian areas would constitute violating the rule of prohibition of indiscriminate attacks.[6]”

According to STJ reporter, 14 rockets is the total number of rockets loaded with cluster munitions that fell on several cities and towns in Eastern Ghouta on February 2, 2018. According to several sources, the rocket was launched from Liwa (122) located on the outskirts of Medaa, and adjacent to al-Dumayr in Damascus countryside; the time of its fall lasted from 1:00 p.m. to 3:00 pm in order to kill and injure as many civilians as possible, but STJ reporter said that the greatest damage caused by these bombs lies in several points:

1. The vast area that the bombs fall in, because after the bombs exit from the rocket that was carrying them, they land on the ground through parachutes thus widening the area the rockets spread in and multiplying their damage.

2. Some of these bombs do not explode immediately but remain for a few minutes in the ground, which is the time when ambulatory staff arrive at the scene, meaning that the Syrian regular forces intend to obstruct the ambulance operations.

3. Some of these bombs never explode but remain on the ground waiting for anyone to touch them or to be exposed to any vibration in the future, which makes these bombs constitute an omen of death at any moment.

4. The small size of these bombs helps them to get into narrow and sensitive areas and explode inside them.

Details of the Attacks

Mohammed al-Asali, a member of the Civil Defense who rushed to Mesraba when it was attacked with ground-to-ground missile loaded with cluster munitions on February 2, 2018, said:

"At 2:00 p.m, an-Nhas district located in Mesraba town was targeted by a rocket loaded with cluster bombs; most of these bombs exploded, injuring several civilians seriously, including a 10-year-old boy whose feet were in a pitiful condition. Moreover, the explosion resulted in the death of a civilian whom I could not identify his name, and as soon as the ambulance arrived at the impact site, the regime mounted another rocket loaded with cluster bombs."

Image of an unexploded cluster munition that fell on the residential neighborhoods in Duma on February 2, 2018.
Photo credit: Duma Coordination.

Mohammed al-Asali noted that the Syrian regular forces deliberately shelled the town with another cluster rocket, in order to disrupt the aid operations, explaining that some of the cluster munitions exploded immediately after they fell on the ground, while others exploded four minutes later, thus doubling the number of civilian casualties and injuring a member of the Civil Defense while doing his duty.

Image of a child victim who was injured in shelling Mesraba by rockets loaded with
cluster munitions on February 2, 2018.  Photo credit: Activists from Mesraba

According to STJ reporter, shelling Mesraba coincided with another bombardment on the residential neighborhoods in Hamorya city, which was confirmed by Amer Issa, who hails from Hamorya, as he testified:

“At 3:00 p.m Hamorya was shelled by a ground-to-ground missile loaded with cluster bombs that fell directly on the eastern neighborhood amid a populated area killing three civilians, including a child. The casualties were identified as Mohammed Haytham Hamza, a young man, al-Haji Othman Tomeh, and Khaled Ahad al-Mesri, a child, as well as injuring many locals from the neighborhood with various wounds."

Issa added that the Syrian regular forces not only shelled Hamorya with just one rocket, because seven minutes later, another rocket fell near the first strike location and was also loaded with cluster munitions. Given the people were hiding inside the cellars and houses immediately after the fall the first rocket, the occurrence of injuries was reduced in the second attack, but it caused considerable material damage to the civilian’s property, he noted. 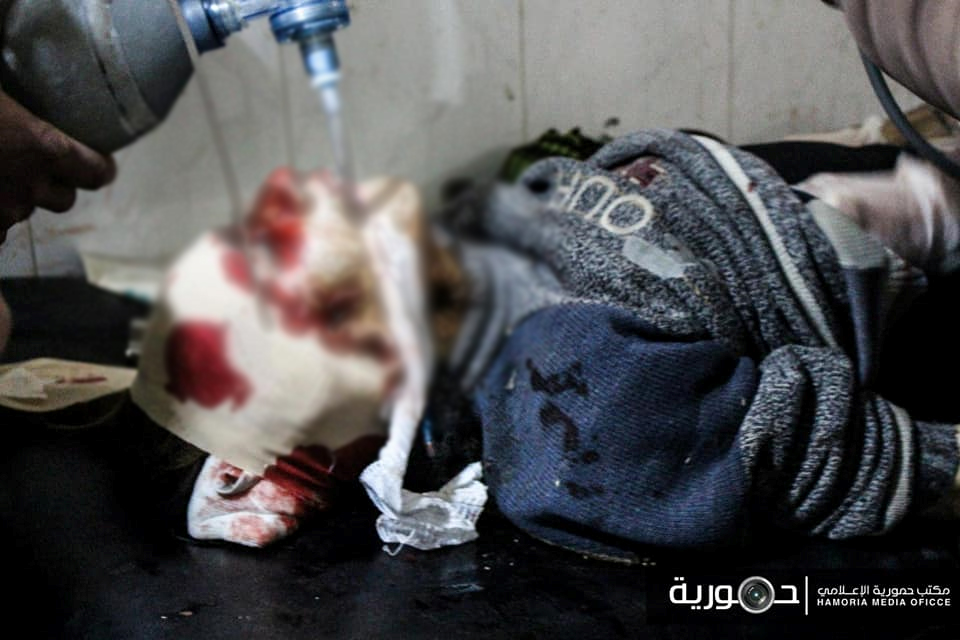 Image of a child victim who was injured in shelling Hamorya by rockets loaded with cluster munition on February 2, 2018.
Photo credit: Hamoria Media Office.

On February 2, 2018, A video footage published by the Civil Defense showed a side of the evacuation process of the injured including children as a result of shelling Hamorya with cluster munitions.

Duma has also not been spared from the shelling on the same day with three ground-to-ground missiles loaded with cluster munitions. At around 1:20 pm on February 2, 2018, the residential neighborhoods in Duma were shelled by a rocket loaded with cluster munitions all of which exploded immediately after they fell on the ground, thus injuring several civilians. Ten minutes later, another rocket exploded, some of its ammunition exploded, but others detonated two minutes later, which increased civilian casualties.  According to STJ reporter, the Syrian regular forces followed these two rockets with a third one also loaded with cluster munitions, but it did not inflict many casualties among civilians because the residents had been hiding inside shelters and cellars.

A video footage published by the Civil Defense in Damascus countryside on February 2, 2018, showed the civil Defense teams while evacuating two women wounded as a result of shelling Duma by rockets loaded with cluster munitions.

Image of an unexploded cluster munition that fell on Duma on February 2, 2018.
Photo credit: Duma Coordination.

[2] Army of Islam controls both Duma and Mesraba.

[4] Cluster munitions: what are they and what is the problem? International Committee of the Red Cross, August 2013, please click on the following link:  https://www.icrc.org/eng/resources/documents/legal-fact-sheet/cluster-munitions-factsheet-230710.htm