Preface: Syrian regular forces continued their military escalation, which had already begun on several cities and towns in the besieged Eastern Ghouta since November 15, 2017. They launched the heaviest attacks using warplanes and artillery shelling on various areas of Eastern Ghouta, including many types of weapons. On Saturday morning January 13, 2018, the area that links Duma[1] and Harasta[2] was attacked with poisonous gases.  According to many testimonies obtained by Syrians for Truth and Justice/STJ, several rockets have landed with Chemicals believed to be chlorine gas, knowing that the strike location was closer to Harasta than to Duma. The rockets landed behind the positions of Ahrar al-Sham al-Islamiyya Movement fighters (Fajr al-Uma formerly), but the winds that blew towards the north-east carried this gas towards Duma, and caused the injury of six civilians, including five women and one child, but they were dispatched to Damascus Countryside Specialty Hospital. They were subjected to necessary treatment.

This attack comes in the context of the military campaign launched by the Syrian regular forces on Eastern Ghouta on November 15, 2017, following the announcement of Ahrar al-Sham al-Islamiyya Movement the battle "They Were Wronged", which began in two stages. The first stage began on November 14, 2017, when the battles resulted in the death of several soldiers of the Syrian regular forces alongside the control of Ahrar al-Sham al-Islamiyya Movement on large parts of the Military Management Vehicles in Harasta. The second phase began on December 29, 2017, when battles imposed a siege on the Military Management Vehicles by Ahrar al-Sham al-Islamiyya Movement, in addition to controlling both the Al-Ajami neighborhood, the automatic oven and al-Hadaeq neighborhood that stretches along the road between Harasta and Arbin from the west side of the Military Management Vehicles.

Majid Al-Khenshur, the director of Damascus Countryside Specialty Hospital, spoke to STJ, about details of the incident and the symptoms showed on the injured. He said:

"The attack took place at about 6:00 a.m. on Saturday, 13 January, 2018, specifically between Duma and Harasta, but it was closer to Harasta than to Duma. However, the opposite direction of the wind led the poisonous gases to large areas in Duma, as many locals reported. About half an hour after the sunrise, the scent began to fade gradually, but there had been seven civilians injured as a result of this gas; they showed respiratory symptoms resulting from respiratory tract irritation but without constricted pupils.  Through clinical examination, we are likely to say that the gas used in the attack is the poisonous chlorine gas, but unfortunately, we have not had material to analyze samples yet, and we were unable to inspect the strike location due to the intensity of the shelling, which could pose a threat to our staff."

In another testimony obtained from Abu Khaled, a native of Duma, who was injured due to inhaling these poisonous gases, spoke to STJ about the symptoms he showed:

"Following the escalation of the regime, which did not rest day nor night on Duma during the last few days, we were surprised by a relative calm on Saturday morning. As usual, the Syrian regime often prepares for an attack after this quiet.  Indeed at 6:00 a.m. I heard the sound of several rockets that landed near the outskirts of the city, and about half an hour later, I began to feel a strange smell spread strongly in the air. The smell increased a little bit, so I went out of my house and I felt dizzy and a general weakness accompanied with nausea. Thank God, my injury was mild since I was in a somewhat distant area from the direct targeting, and the symptoms lasted until Saturday evening, until they began to fade gradually."

Mohammed al-Shami, a combatant who was near the area targeted with rockets loaded with poisonous gases, spoke to STJ about the incident:

"Saturday morning, at 5:30 a.m. the area between both Harasta and Duma was targeted by missiles carrying chemical warheads. The target was closer to Harasta where fighters of Ahrar al-Sham al-Islamiyya Movement (formerly Fajr al-Uma) are stationed. The rockets fell behind their points, and the wind was in the opposite direction of the presence of regime fighters so that poisonous gases would not affect them. These gases reached Duma particularly in the north-western regions; consequently six civilians were injured because of these gases, including 5 women and 2 children."

Mohammed al-Shami said that much of the chatter was made about type of the weapon the region was targeted with, amount of poisonous gases used, and the area it was fired from. He pointed out that Katyusha Rockets (107), were loaded with poisonous gases; they were at least eight rockets, and they had been identified through some combatants specialized in artillery and rockets. Mohammed continued:

"Through the nature of firing the rockets, their sound in the air and the way they explode, we found that these rockets are Katyusha Rockets notably those ground-to-ground missiles (Phil) are homemade rockets, and cannot carry warheads laden with poisonous gases. Unfortunately, we could not get remains of the rockets launched by the regime nor access to the places it fell. The remarkable thing is that the regime followed the scorched earth policy after using rockets loaded with those gases, because it directed the artillery to the strike location and began to fire ground-to-ground missiles (Phil) intensely, so features of the target area were lost. Moreover, the regime continued to bombard the area for four consecutive hours, then followed by intermittent shelling throughout the day and utilized warplanes to bombard the same area as well." 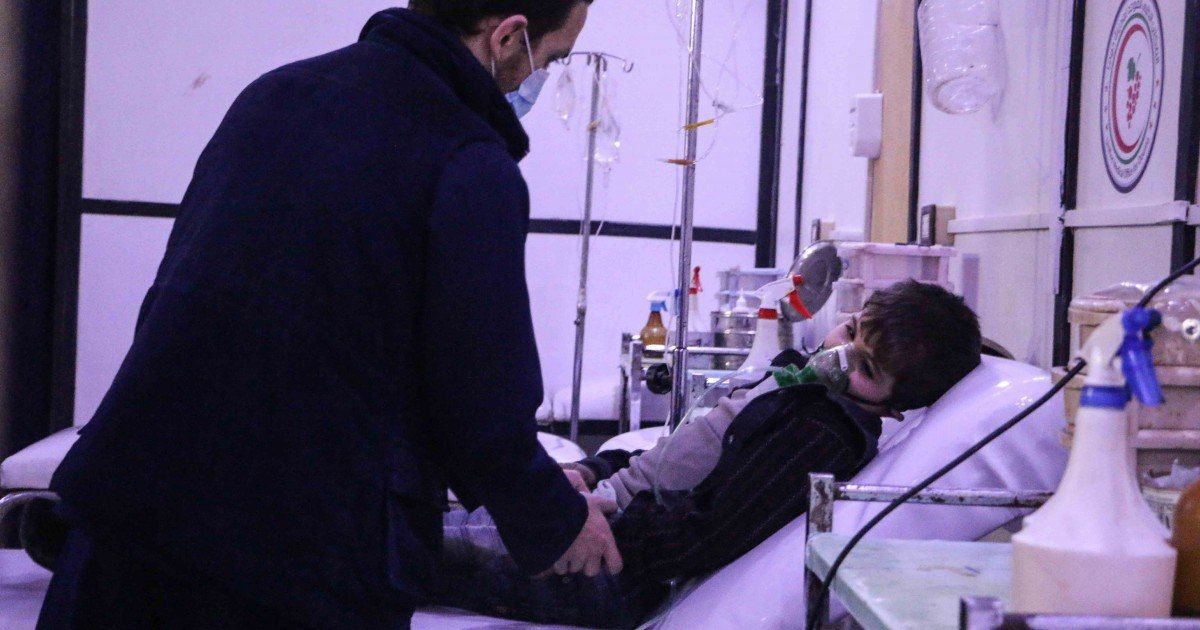 On Saturday, January 31, 2018, Damascus Countryside Specialty Hospital published a video footage showing receiving seven cases of suffocation, including six women and a child as a result of inhaling poisonous gas, likely to be chlorine gas. The symptoms showed were irritation, as well as respiratory symptoms, but without constricted pupils. He pointed out that most of the cases improved by clinical treatment of oxygen, spray and simple painkillers with the exception of a woman who had been treated for a longer time.

For its part, the Health Directorate in Damascus and its countryside stated on January13, 2018 that, at 6:00 on Saturday, it received six cases, including five women and one child, all were diagnosed with symptoms such as mild respiratory disorder, dyspnea and minor irritation without constricted pupils. 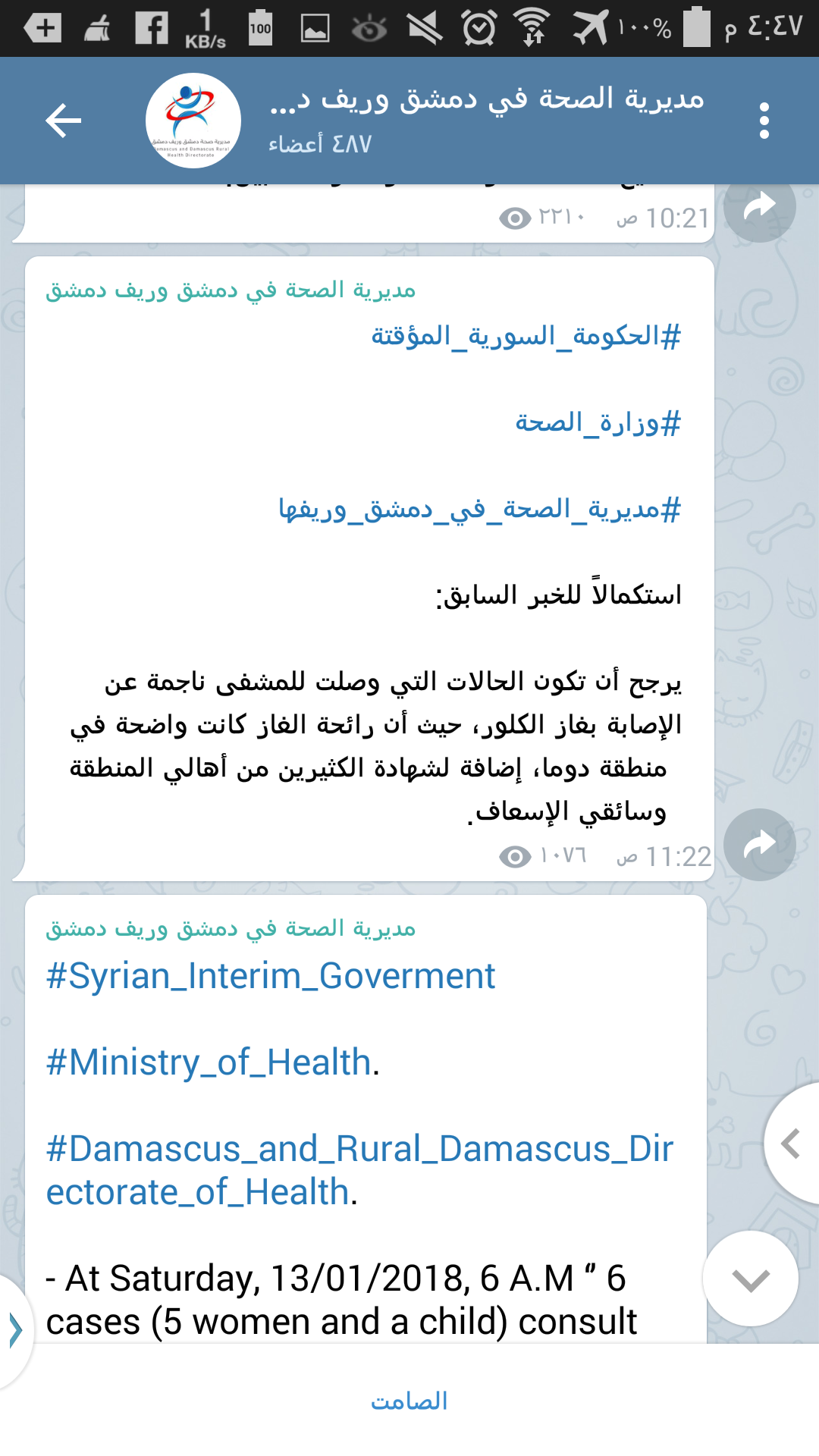 On January 13, 2018, the local council in Duma issued a statement condemning the attack carried out on populated parts that caused suffocation among civilians, and demanded the international community to assume its responsibilities towards what is happening to civilians in Eastern Ghouta.

On the other hand, the Civil Defense in Eastern Ghouta published news of killing a child identified as Hamdi Tabakho, and that he had died as a result of targeting Duma with toxic gas likely to be chlorine on January 13, 2018. When STJ attempted to verify this news, the reply came from the Media officer at the Civil Defense, denying the news and asserting that the child died as a result of a sudden cardiac stop and not because of inhaling poisonous gas.

According to STJ reporter, this is not the first time poisonous gas attacks has been carried out on Eastern Ghouta. On December 30, 2017, in conjunction with the clashes between armed opposition fighters and the Syrian regular forces on the Military Management Vehicles Front in Harasta, the latter carried out an attack targeting fighters of the Army of Islam on the battlefronts, particularly in the Balaliyya area. The spokesperson of the Staff of Army of Islam confirmed in a written statement that the attack had occurred on the day mentioned without any injuries being recorded.

STJ had earlier prepared a report documenting attacks in which poisonous gases had been used on one of the battlefronts in Harasta specifically in November 2017. STJ had also prepared a report on three attacks in which poisonous gases were used by the Syrian regular forces on several clashes zones in Eastern Ghouta against the armed Syrian opposition factions- Faylaq al-Rahman- during July 2017. In conjunction with the Justice for Life Organization, STJ issued a Special Report on the Chemical Attack on Khan Sheikhoun-Idlib on April 4, 2017.