“The Bombardment Came Only 48 Hours after the Aid Convoys Entered”

Preface: Only 48 hours after delivering United Nations assistance to civilians besieged in Douma[1] city, warplanes, specifically on Wednesday, 15 November 2017, launched an air raid on the food warehouse of the Local Council in Douma city, after part of the UN aid was placed inside. According to Syrians for Truth and Justice's (STJ) reporter, the shelling resulted in spoilage and damage of food and aid inside the warehouse. It also exacerbated the humanitarian situation within the city after the trapped civilians were denied access to aid.

On the other hand, this shelling came in the context of the fierce military campaign being waged by the Syrian regular forces on the whole cities and towns of besieged Eastern Ghouta, following the battle launched by Harakat Ahrar al-Sham al-Islamiyya on November 14, 2017, which was called “That They were Wronged”[2] in order to control Military Vehicle management “the largest military barracks of regime forces in Eastern Ghouta” in Harasta city adjacent to Madyara and Irbin towns.

It is worth mentioning that on May 4, 2017, sponsor states of Astana Talks (Russia, Turkey and Iran) signed a Memorandum of Understanding for establishment of de-escalation zones in Syria. It included Eastern Ghouta in Damascus countryside, Idlib province and some parts of northern Homs, as well as some parts of adjacent provinces (Latakia, Hama, and Aleppo) and some parts of southern Syria. One of the most prominent items is cessation of hostilities between conflicting parties and creation conditions for access medical aids.

On July 22, 2017, the Army of Islam participated in signing de-Escalation Agreement in Syria, followed by Failaq al-Rahman, on August 18, 2017. 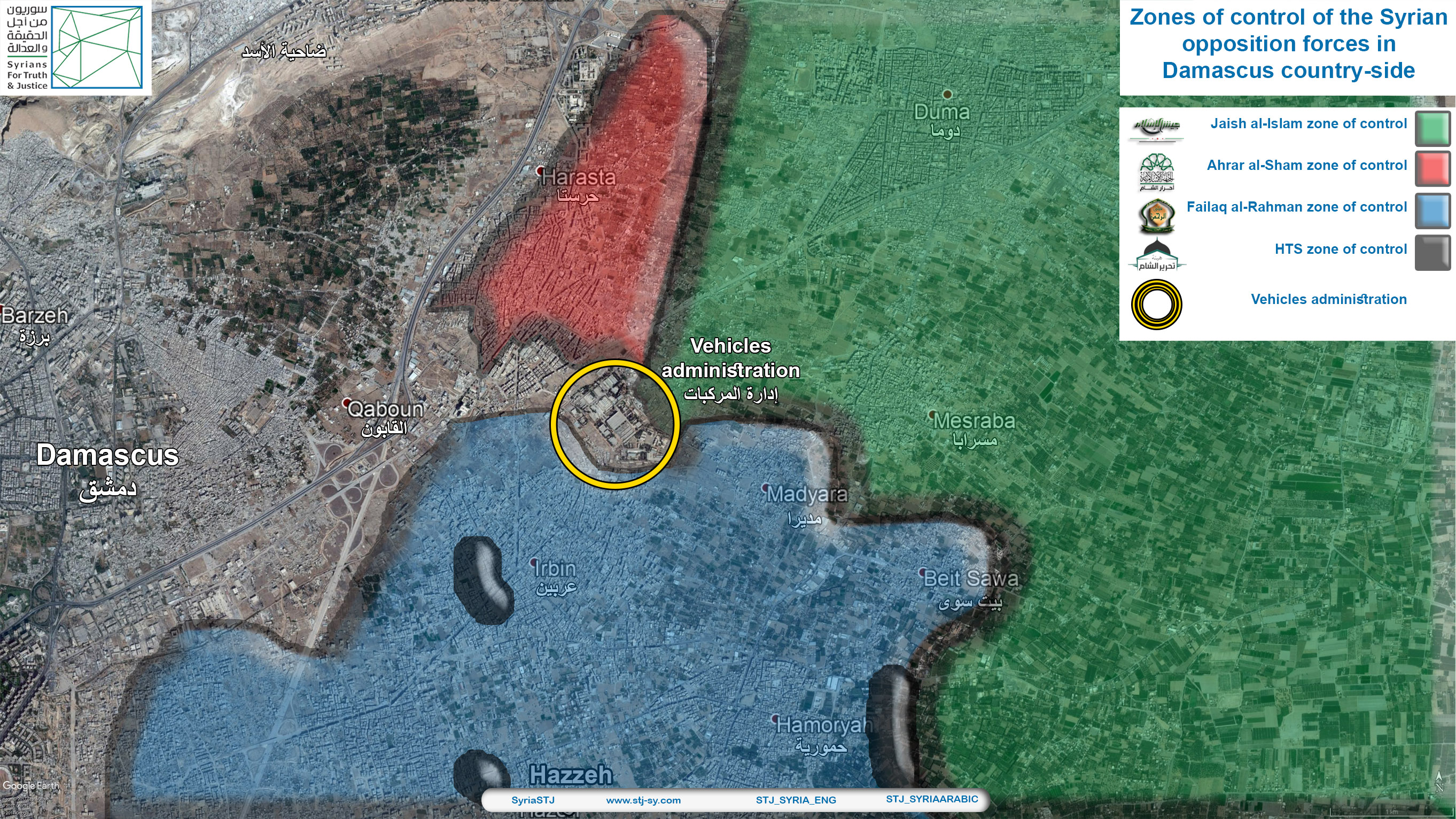 First: Tightening the Siege on Civilians and Campaigns to Lift It

Douma city, like other Eastern Ghouta cities and towns, has been suffering from the siege imposed by the Syrian regular forces for several years. The suffer has increased dramatically with the siege tightening since February 2017, particularly after all tunnels, which connect Eastern Ghouta with areas of Damascus, went out of service being affected by the military operations between the regular forces on one hand and armed opposition forces, on the other.

As a result, activists in cooperation with a number of media men launched a campaign titled "Break Ghouta Siege", with the aim of press pressure on the Syrian regular forces to allow UN offices bringing in humanitarian assistance.

Ninety-nine Syrian civil organizations have also signed a petition requesting UN’s urgent action to end the suffering of the besieged civilians, especially after the increased deaths due to shortages of food and medicine[3].

Following these pressures and campaigns, specifically on  November 12, 2017, UN aid convoys managed to enter[4] Douma city, it consisted of (22) trucks, 10 of which were loaded with foodstuffs and 9 others loaded with medicines. The number of food baskets was (4300), (55) kg each, and they were supposed to be distributed to (27243) resident and internally displaced families, meaning that the one meal will be distributed to a number of families ranging from (6) to (10), depending on the number of each family’s members. So that the one individual just get (1,3) kg, as the Director of the Local Council office in Douma city said to STJ.

Second: Increased Suffering and Shell on a Food Warehouse by Syrian Regular Forces and their Allies

Despite the scarcity of humanitarian assistance provided by the UN to Douma city, the Local Council has taken the initiative to distribute the food baskets to the distribution centers located in Douma neighborhoods. However, the recent military escalation by the Syrian regular forces in all cities and towns of Eastern Ghouta, hindered the completion of that distribution, as one third of the food baskets remained in the Local Council’s food warehouse pending the possibility of resuming work.

On Wednesday November 15, 2017, Syrian/Russian warplanes bombed the Local Council food warehouse. According to STJ reporter, the shelling resulted in the destruction of at least 40 meals of foodstuffs in the warehouse as well as another (50) meal damaged by shelling distribution centers in Douma on the same day. In this regard, the Director of the Local Council’s media office in the city of Douma spoke to STJ, saying:

"The targeting of warehouses and aid is part of the systematic campaign of the Syrian regime against civilians. In turn, members of the Local Council delivered a message to UN delegation, while entering assistance to Douma, saying they had focused on the need to spare civilians and protect civil institutions, and assured that the Syrian regime is the one to obstruct the delivery of aid to civilians, not the opposition factions, as the Regime media claims." 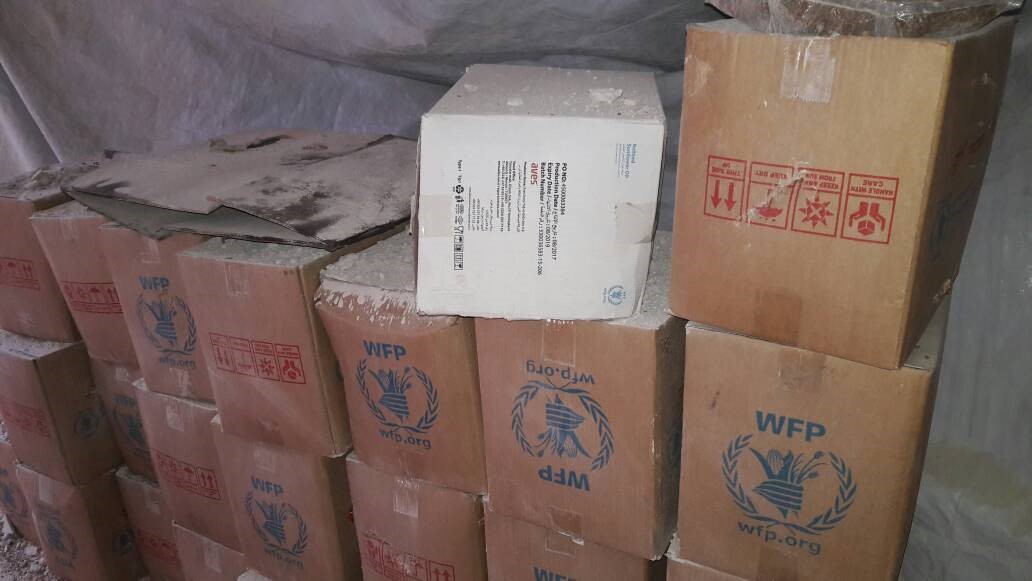 Image shows, the damage caused to UN food supplies placed in the Local Council’s warehouse in Douma city, after Syrian regular forces and its allies shelled it on November 15, 2017.
Photo credit: STJ

For its part, the Local Council of Douma condemned the shelling on its warehouse and distribution centers, through a statement issued on November 16, 2017, in which it called on the UN to assume its responsibilities and to exert pressure on the Syrian regular forces to spare the civilian population and civilian objects from conflict. It also indicated the losses caused by the shelling.

Image shows the statement published by the Local Council in Douma, in which it condemned the shelling by Syrian regular forces of its warehouses on November 15, 2017, calling on the UN to assume its responsibilities and to exert pressure on the Syrian regular forces to spare the civilian population and civilian objects.
Photo credit: Facebook page of the Local Council in Douma.

STJ had earlier published a report on the recent military escalation by the Syrian regular forces in Eastern Ghouta following the battle of "Vehicle Management", where the report covered the shelling of Harasta city with incendiary substances.

[1]  Douma city is under the full control of the Army of Islam.

[2]  According to many sources, fighters have managed to control large parts of Vehicle Management’s facilities.

[3] Jan Egeland, UN under-Secretary-General for Humanitarian Affairs, said that 400,000 people are trapped in the Eastern Ghouta near Damascus, seven ill persons have died for not being evacuated from Ghouta and 29 others are on the brink of death, including 18 children. In addition to almost 400 people, three-quarters of them are women and children, whom should be evacuated for lack of food and medicine. He also called for the unhindered access of urgent aid to civilians, according to al-Hayat Newspaper.

[4] The last time UN convoys entered Douma was on August 17, 2017. Forty-eight convoys entered the towns and villages of Douma, al-Nashabiyah and al-Shifuniyah, loaded with only 7000 meals, forcing the civil society actors to distribute each meal on four families to cover all families in the areas mentioned.