Image of the survivor Hussam Jaddou after his recovery in his workplace, taken on September 8, 2017. Photo Credit: STJ

Background: Although several years passed since Orm al-Kobra massacre in Aleppo countryside, suffering of the victims who survived continues so far because of the terrible burns caused when the educational institute (Eqraa) was targeted with severe incendiary weapons, believed to be napalm.

It was August 26, 2013, when a warplane affiliated to the Syrian Regular Air Force pounded the institute at the rush hour, while it was full of students having tutoringcourses for the elementary and the secondary grades, in addition to some teachers and visitors. The attack claimed up to 40 persons and injured more than 70, mostly students.

More than four years passed and still some of the survivors suffer from disfigurement affected their bodies and serious psychological disorders make them feel as if they are strangers in their own society. Time was not enough to make families of the victims forget their children who burnt to death.

Like a Little Child, I Started to Recognize the World Once Again

Mohammed Lotfi Asi, born in Orm al-Kobra in 1995, was one of the students survived the apocalyptic massacre. He is still suffering from disfigurement and scars that changed his life upside down. Recalling the moments of the bombardment, he said to Syrians for Truth and Justice-STJ,

“At 5:00, Monday evening, August 2013, a rocket fell in front of a balcony of a classroom, I remember well that sound of the warplane was much higher than that of the bomb. Moments later, most of the students became charred bodies or completely disfigured bodies. The devastation caused by the rocket was small compared to the burns and atrocities it caused.

Like the other students, I was infected with serious burns; the ambulance team as well as the Civil Defense dispatched us to the nearby Atarib Hospital where water was poured over our bodies and first aid was provided, despite the hospital’s poor potentials. The same day, I was transferred to a hospital in Antakya, Turkey, since the third-degree burns covered more than 85% of my body.”

When Mohammed arrived at the hospital in the Turkish Antakya city, doctors gave him strong painkillers, and carried out a test on his hand, which became almost charred. They began injecting his fingers to find out how much he felt because he had lost any senses, after that, they put him into the intensive care unit. There, he was greatly fearful of being disfigured for his entire life. He added:

"I stayed in the intensive care room about 45 days, underwent daily surgical operations, from restoration operations and removing the dead skin to operations on my fingertips after I had lost control of them well. 15 days later, I witnessed a painful event that made me collapse completely. Destiney chose my friend Mohammed's bed to be next to mine in the hospital; his health condition was bad due to the burns from the attack. Mohammed died in front of my eyes that I could hardly see with.

After 45 days, I was out of danger so I went back to my house, and headed daily to hospitals inside Syria in order to change the bandage, put the ointment and other materials that may reduce disfigurement after they became an obsession for me."

Mohammed’s family and friends supported him greatly to persist in the treatment and to go out to meet people. Indeed, after refusing his health status two years after the attack, he succeeded in accepting his new health status that became a reality inherent him forever. He said in his testimony to STJ:

“Today, as you see, I am trying to lengthen my hair to hide disfigurement of my face, my head and my hands; there are still some scars and ulcers. I did learned to accept my new health condition, as I learned to walk and eat again like a little kid who is getting to know the world once again.” 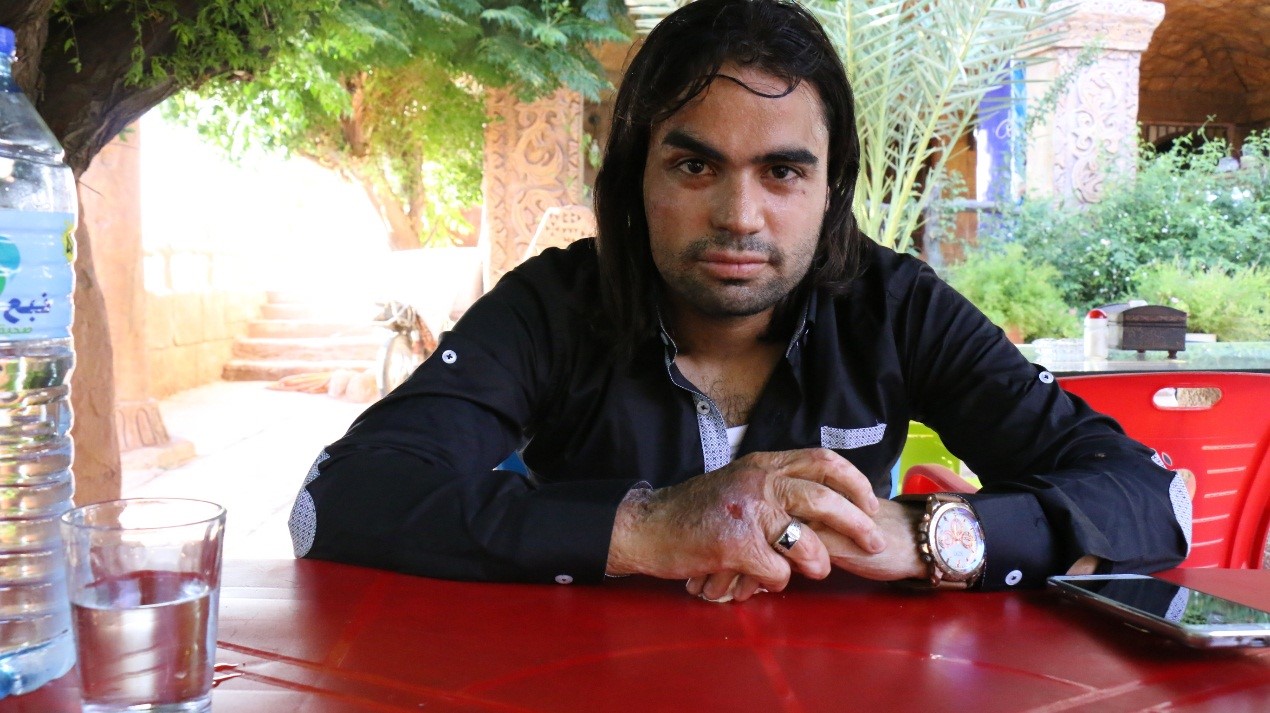 Image of the survivor Mohammed Lotfi Asi years after his injury and recovery, taken on September 7, 2017.
Photo Credit: STJ

Muhammad's dream of becoming an engineer, as he planned to be in the future, faded away.  The injury caused him drop out of school for two years, and it was very difficult for him to return to school because of the psychological obstacles and the great fear that he had at the time. Nevertheless, he managed to overcome his fears and determined to go out and work in the domain of Software and Internet; he is currently working hard to prove himself and gain new experiences. 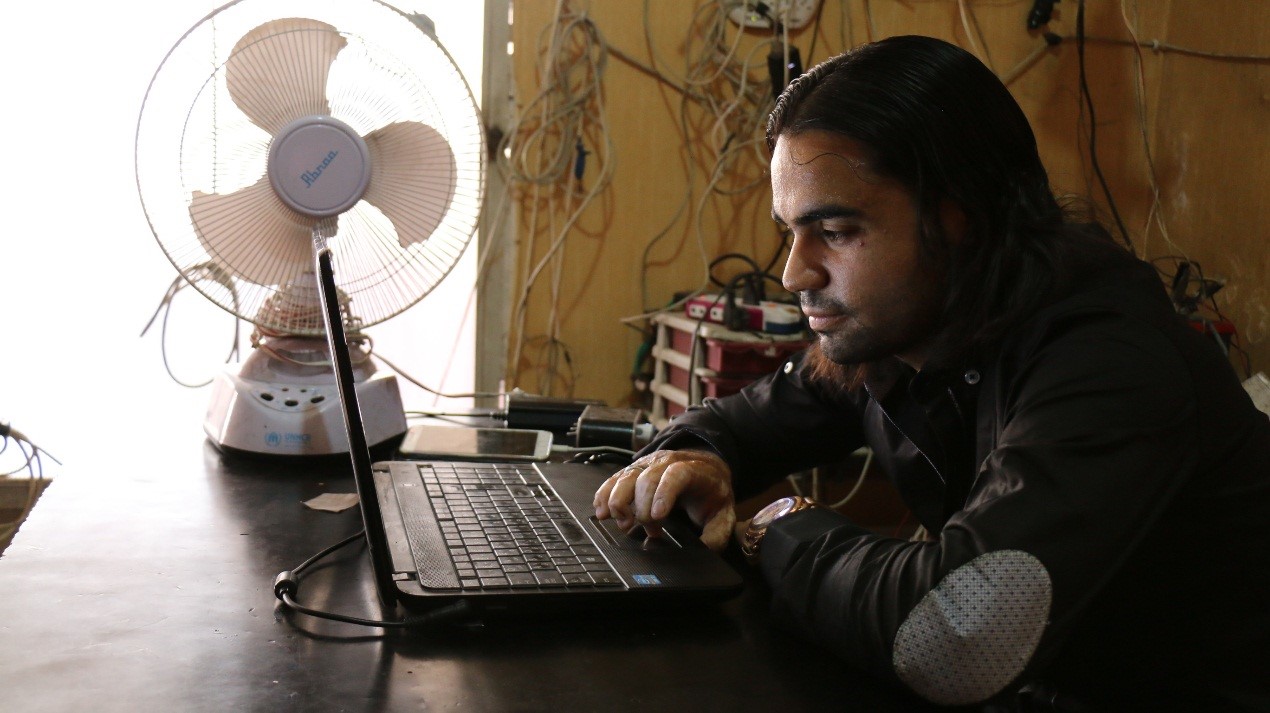 Siham Qanberi, born in Aleppo in 1996, was one of the students who died in the attack. She suffered severe burns that covered all her body and caused her death, her brother, Mohammed, confirmed that in his testimony to STJ:

"Siham was a high-school student, and all I know is that she was having lessons as usual at the moment of targeting the institute. Both of her friends, Wissam and Walaa, died and became just charred bodies whereas Siham was badly burned and was immediately dispatched to Turkish hospitals. My parents followed her to Turkey and found difficulty in identifying her; they were shocked at the horror of the incident. Siham remained in a hospital in Gaziantep, Turkey, for four days, but because of her bad health condition, she was transferred to a hospital in Istanbul, Turkey, where she remained for a whole month receiving treatment and strong painkillers. At first, she improved and her body responded to the treatment, and the infection rate reduced to 35% due to the restoration operations and skin grafting she underwent.”

Siham’s brother added that her health condition suddenly deteriorated, as a result of this, she was transferred to another hospital in Ankara, Turkey, where she remained for a whole month. She struggled for cure, but her weak body did not endure the horrific pain and after suffering for two whole months, she died on 26 October 2013. Mohammed said in his testimony:

"It was a great shock to us, especially to my parents, who did not leave her during the treatment, let alone my father, who starts weeping whenever someone mentions Siham’s name in front of him. We lost Siham that dreamed to be a college student at the English department, the dream that many have promised her to achieve in case she was stronger than the disease and managed to recover."

I Must Do Something Useful

Hussam Jaddou, born in KfarTaal in Aleppo province in 1996, was also a survivor of the massacre, and an eyewitness. However, his severe injury increased his determination to achieve his dream and complete his study. Recalling moments of targeting the institute and his injury, he said to STJ:

“First of all, we heard the sound of a warplane approaching slowly, and it was only moments when the warplane targeted a residential building adjacent to the institute. We were very frightened, some of us hid, others went out to the institute's Square. The first rocket penetrated that two-storey building and injured two children, one with special needs. As for me, I went to the top of the institute to see what happened, and only five minutes later, the plane raided again, but this time the rocket fell on us directly and specifically in front of a classroom’s window. The rocket was loaded with incendiary napalm, which seriously injured me and the rest of my friends, some of my friends became completely charred bodies; there were about 50 injuries.”

Hussam’s Journey for Cure and His Suffering

“The burns covered 90% of my body, particularly my face, hands and feet, making it extremely difficult because I felt unbearable pains and lost the ability to speak or see. The doctors opened a vein from the ureter to insert the serum and the morphine to alleviate the terrible pains.”

Overcome the Difficulties and Psychological Crisis

55 days after surgical operations being carried out daily, Hussam returned home and his family started to take care of him. It was only a short period until he was able to step his first steps again, as he recovered after few months of medication. However, scars and disfigurement left their effects on his body, face and one of his ears, demanding him a great effort to overcome the psychological crises left by those distortions with the support of his family and friends. Hussam said:

"A year after my injury, I went back to my books and my study, underwent exams for the high-school certificate in 2014, and succeeded with very good marks. However, given the ongoing war in Syria, I could not complete my study in 2015, and I lost another year of my school life, but in early 2016, I became a student in The Institute of Preparing Teachers located in al-Atarib, challenging most of the difficulties and conditions of war, and I made new friends and teachers. Moreover, I became more active, less shyness and I got on well with friends, and right now, I am working with my brother at a bike maintenance shop, maybe I do something useful."

Image of the survivor Hussam Jaddou after his recovery in his workplace, taken on September 8, 2017.
Photo Credit: STJ

The Brothers Mohammed and Omar

The brothers Mohammed and Omar from Orm al-Kobra located in Aleppo countryside were among the victims. Mohammed died due to severe burns whereas his brother Omar survived but he is still striving to live, according to the testimony of their father identified as Abo Omar, who said:

“Both my children Mohammed and Omar underwent many operations as burns covered 75% of their bodies. I used to watch them every day, support them and made them feel strong in order to be out of danger. Unfortunately, it was all useless; 15 days after the treatment, Mohammed’s condition aggravated and he died on September 10, 2013, when the medical staff could not rescue him. Then, my responsibility towards the other son, Omar, became greater, I tried to do my best not to lose him either. I moved with him among several hospitals where he underwent many operations during the past years. He is currently alive and is undergoing skin grafting operations; the biggest problem is that his skin is blackish and the swelling is apparent on his face, let alone his deteriorated and troubled psychological state.”

“Incendiary weapons can contain any number of flammable substances, including napalm, thermite, or white phosphorous, and are designed to set fire to objects or to cause burns injuries. They are not chemical weapons, which kill or incapacitate by the toxic properties of the chemicals released.

Incendiary weapons produce extremely painful burns, often down to the bone, and can cause respiratory damage. These burns are difficult to treat, especially in conflict areas lacking adequate medical facilities, and the treatment itself can be most excruciating. Permanent Scarring and disfigurement can lead to social ostracism. Incendiary weapons also cause fires to infrastructure due to their broad area effect, which means they cannot be used in a way that discriminates between soldiers and civilians in populated areas.”[1]