On Thursday 22nd of September 2016, a suicide bomber detonated an explosive vest among civil and military leaders in Inkhel city, Dara governorate, during a meeting at the city police station which had just honored high achieving high school students in the region. According to the Syrians for Truth and Justice reporter, located in Dara, about 12 people were killed, including Dr Yakoub Alammar  from Namar town, Dara. Alammar was a governor of the free Dara province and a current minister of local administration in the “Syrian Interim Government”, both organized by the Syrian opposition. 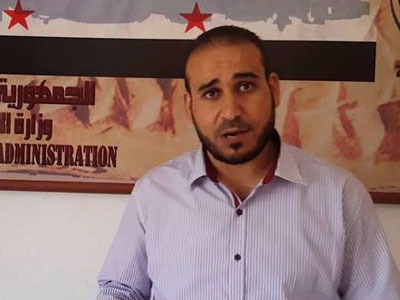 Also killed was Gamal  Alamareen, an engineer,  from Nawa town. He was the former director of the electricity station in Shikh Meskeen, then later became a member of the council in the free Dara province. At the time of his death, he was also the current Deputy Minister of Service in the Syrian Interim government. 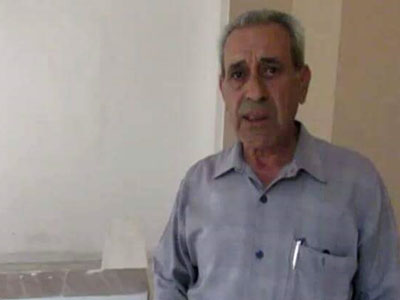 A dozen people were also injured, some with serious wounds:

– Osmat Alabsi, who heads the Court of Justice in Horan, Daraa.

– Dr Abd Alhakeem Almasri, who is the assistant to the Minister of Finance in the Syrian Interim Government.

– Mohammad Serour Almotheb, who heads the Executive Office in the Dara Provincial Council.

– Yaser Alfashtaki, who heads the security committee (acting as the Chief of the Police) in Inkhil city.

– Ibrahim Albardan, who is head of Tafas Local Council.

– Riyad Alrbdawi, who is an engineer as well as the “agricultural director” in the south. 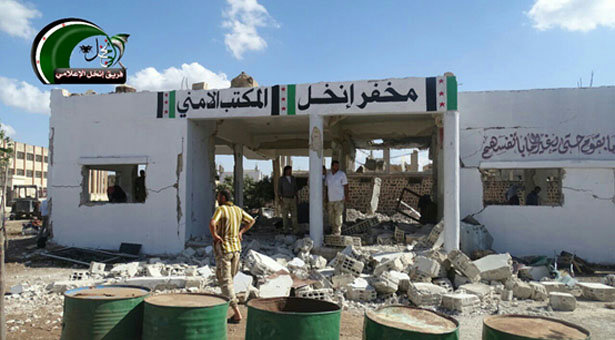 In addition to the human casualties, the blast caused significant destruction to the targeted building.

G.R, a civilian resident of Inkhil city, who refused to give his full name due to security reasons, stated to Syrians for Truth and Justice that the blast took place at about 12.00 pm, soon after the news of a high ranking delegation would visit Inkhil, Daraa, to visit the police station was announced. He added:

“The delegation arrived after half an hour, so the highway was closed as well as the minor roads leading to the security center. At the beginning of the meeting, however, an argument started among recruits near the meeting place. It turned into a quarrel. Here it is important to note that the Inkhill City Police Station has armed recruits from throughout Daraa, but they are all members of the Free Syrian Army.”

G.R, who also refused to give his name due to security concerns, was near the blast site. G.R. stated that because of the great number of recruits, it was difficult to identify all of them as working at Police Station, but that one tall guy wearing a camouflage military uniform headed to the center, taking advantage of the situation. As the security guard tried to stop him, he ran and tried to enter the meeting where the guard. S.W., who also refused to give his name, shot him directly. At the same moment, the bomber detonated his explosive vest just before entering the hall, causing the huge blast that killed many and wounded many more.

Immediately after the explosion, the Syria opposition accused the self-named “Islamic state,” ISIS, also known as the Islamic State of Iraq and Syria (Daesh), of committing the attack.

After a few hours later, the “Amaq Agency,” the public voice of ISIS, claimed responsibility for the attack and published this statement: 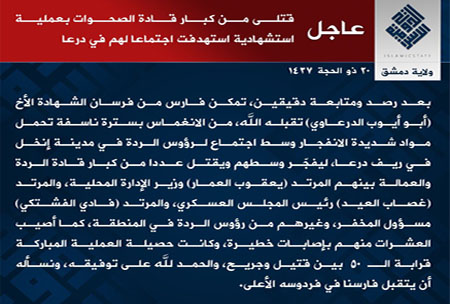 Activists from the Daraa province, who follow the web pages of individuals aligned with the Islamic State, recognized the suicide bomber as A.M.R, whose nickname is Abo Ayoub  Aldarawi. He was born in1994.