“Non-Stop Using Chlorine Gas as a Weapon in Syrian Conflict”

Image of an injured with toxic gas, a fighter affiliated to the opposition faction Failaq al-Rahman, at a medical center in Zamalka, on July 20, 2017. © the Medical Office in Jobar neighborhood in Damascus.

Preface: On June 15, 2017, the Syrian Regular forces commenced their most violent offensive on the eastern areas of the capital Damascus with a view to advance and siege Jobar, the last stronghold of the Syrian armed opposition in Damascus. The regime never stopped attempting to restore the neighborhood utilizing all kinds of weapons including aircrafts, heavy artillery, Phil Rocket, despite of signing the de-escalation agreement[1] on May 4, 2017, that included Eastern Ghouta. However, three toxic gas attacks were reported conducted by Syrian regular forces on several clash zones with the armed Syrian opposition faction, Failaq al-Rahman, during July 2017, according to Syrians for Truth and Justice /STJ Reporter in Eastern Ghouta having interviewed many people who were exposure to the gas, in addition to medical staff who came to help.

First. An Attack Loaded with Toxic Gas on a Clash Point in Ein Tarma:

July 20, 2017, at about 5 a.m. a clash point located in Ein Tarma was targeted with a strike suspected to be toxic chlorine gas attack as the injuries showed symptoms matched the effects of chlorine gas, many fighters from Failaq al-Rahman faction testified. One of them confirmed that toxic gas source was a hand grenade thrown from a sand berm that the Syrian regular forces use to fortify in, but no casualties recorded. He continued:

“While we were in a high-alert status at Ein Tarma front because of the regime’s repeated attempts to storm our points, we heard the sound of a bomb explosion, within only seconds we smelled strange smell, at the spot, I hurried to put on the medical mask. One of my colleagues called the medics, but three of my fellow fighters were in a state of asphyxiation, cough and shortness of breath. Therefore, we transferred them to several medical facilities given large numbers were affected."

On July 20, 2017, a videotape published by the Medical Office in Jobar showed some injured at a medical facility located in Zamalka in eastern Ghouta, Damascus countryside. The injured manifested symptoms of exposure to poisonous gas, such as asphyxiation and shortness of breath,

Dr. Hamza was at the same medical facility and spoke to STJ about the symptoms that injured showed, he said:

“At 5:30 a.m., we received dozens of injured fighters of Failaq al-Rahman, while we were treating them; they showed symptoms such as conjunctivitis, quickness of breath, severe cough and nasal irritation, which is likely suggest using toxic gas in the attack. It is worth mentioning that those injured showed improvement within 24 hours of treatment. However, we are not assure that the gas is chlorine unless we analyze it, which is an impossible matter under the choking siege on Eastern Ghouta. But, depending on the symptoms, I am most likely that they were exposure to chlorine gas.”

In a confirmed certificate, Hussam , a nurse who was at the same medical facility where the injured were transferred, said that the symptoms that manifested on the wounded indicated that chlorine gas was used in the attack, like severe cough and shortness of breath as well as the strong smell that came from fighters’ clothes. Hussam also added that they treated the symptoms by placing the injured on the medical ventilator that takes the poisonous gas out of the lungs; the treatment lasted several hours, he described. 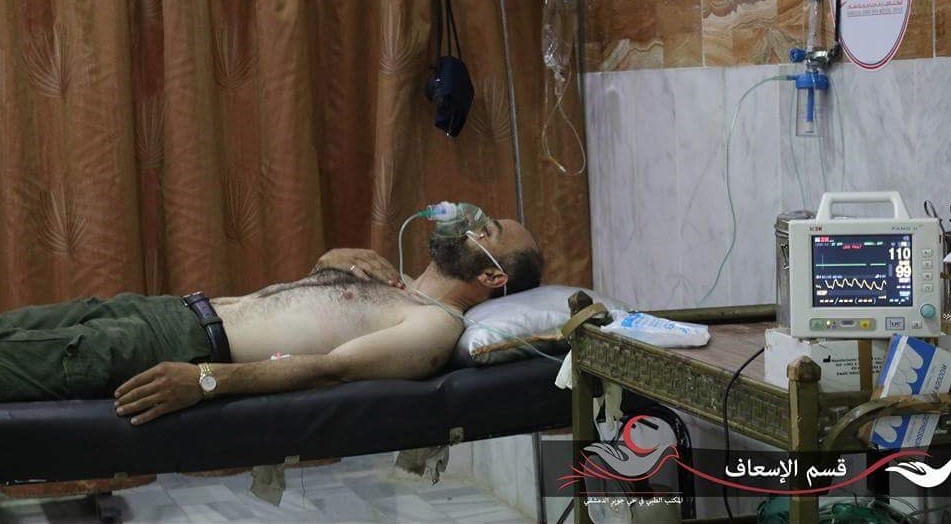 That was not the first time Syrian armed opposition factions stationed points were targeted by poisonous gases. On July 2, 2017, at about 1:30 a.m. the Syria regular forces resumed systematic attack by poisonous gas believed to be chlorine on one of Failaq al-Rahman stationed points located in Zamalka, eastern Ghouta, Damascus countryside. Many medical staff who worked at the same medical center assured that to STJ and indicated that the attack did not cause any deaths, but many fighters were affected with severe asphyxiated and symptoms which were likely caused by using toxic chlorine gas.

“At about 3:00 p.m. about eight injured from Failaq al-Rahman fighters came to our medical facility, they suffered from severe suffocation, conjunctivitis and quickness of breath, which indicated that the gas used was the poisonous chlorine gas again. After April 2017, a week never passed without receiving from 1 to 4 injured who inhaled poisonous chlorine gas, mostly of Failaq al-Rahman fighters.”

In a related context, the Directorate of Health, Eastern Ghouta Division, confirmed in a statement issued on July 3, 2017 that on Saturday afternoon, July 1, 2017, hospitals received about 30 cases from Wadi Ein Tarma Front after shelling them with strong abhorrent gas. The statement also indicated that the bombardment reiterated on Sunday, July 2, 2017, as hospitals received 10 cases with the same symptoms because of shelling gas on Zamalka Front again. However, the injured were treated and they improved within 24 hours, which likely that they were bombed by and injured with chlorine gas.

Image shows the statement issued on July 3, 2017, by the Directorate of Health, Eastern Ghouta Division, which confirmed that on July1, 2017, and July 2, 2017, clashes points in Zamalka and Ein Tarma were exposed to a poisonous gas attack believed to be chlorine gas,
Photo credit: Jobar News.

In turn, Failaq al-Rahman issued a statement on July 3, 2017, following the two attacks on July 1 and 2, 2017, which targeted the clash points with the Syrian regular forces in Ein Tarma and Zamalka-Eastern Ghouta- Damascus countryside, and called the International Community take the necessary procedures to end the use of toxic gases and chemical weapons against Syrians.

Image shows the statement issued by Failaq al-Rahman on July 3, 2017, which detailed the two attacks on July 1 and 2, 2017, believed to be loaded with chlorine gas on several clash points between Failaq al-Rahman and Syrian regular forces in Ein Tarma and Zamalka-Eastern Ghouta- Damascus countryside.
Statement credit: Failaq al-Rahman Home Page.

April 22, 2017, STJ had documented in a previous report the use of toxic gas by the Syrian regular forces on a clash point with Syrian armed opposition factions in Eastern Ghouta, Damascus countryside. Moreover, on April 4, 2017, STJ issued a special joint report with Justice for Life Organization on the chemical attack against Khan Sheikhoun.

[1] Signed at the Astana Conference (4) between Turkey, Russia and Iran, it was agreed to reduce escalation and establish four safe areas in Syria for six months and renewable, including Eastern Ghouta, Idlib province and certain parts of adjacent province (Lattakia, Hama and Aleppo).