Background: Since the beginning of March 2017, Daraa province is exposed to raging military attacks carried out by the Syrian regular army. The Syrian/Russian warplanes bombarded most towns and cities of the province with hundreds of airstrikes in addition to launching hundreds of rocket shells and barrels that killed hundreds of civilians being killed or dead including women and children, Syrians for Truth and Justice/STJ reported. STJ Reporter said that the regime forces’ aim is a collective punishment to what is believed to be the popular incubator for the Syrian opposition in addition to pressurize the opposition to stop their military advance in al-Manshiya neighborhood located in Daraa, which the opposition controls large parts of it. Quoting eyewitnesses and residents of the province, STJ has reported military reinforcements to the south of Syria, on the international Highway linking Damascus and Daraa, at the end of last May 2017. According to the same sources, foreign troops were monitored accompanying the Syrian regular army, including Najbaa Iraqi Movement, forces of the Lebanese Hezbollah, and Liwa Fatemiyoun.

Violent Attacks Since the Beginning of June 2017

The Syrian regular army, specifically in the early days of June 2017, began a series of very violent attacks targeting, frequently indiscriminately and in reprisal, neighborhoods held by the Syrian armed opposition forces, especially Daraa refugee camp and several neighborhoods in Daraa al-Balad, Tariq al-Sad and al-Nouaima in the eastern countryside of Daraa. The Syrian army, directly backed by the Russian military aircraft, used its Air Force in the attacks in addition to the use of locally made rockets like the short-range Phil rockets, rocket launchers and tens of hundreds of barrels dropped by helicopters, some of the barrels were loaded with incendiary materials similar to napalm.

On June 5, 2017, the Syrian regular Air force committed a horrific massacre against civilians in Tafas, when it launched air raids on residential neighborhoods in the eastern district of the city, leaving dozens of victims being dead or injured, including women, children and displaced persons from other areas.

Adam al-Tibi, a resident from Tafas and an eyewitnesses of the massacre, said in his testimony to STJ:

"Syrian armed opposition-held Tafas was relatively calm and no attacks or missiles has been recorded for several months, but within the past few days we started to hear sounds of explosions and shelling in Daraa. Sometimes the Syrian/Russian aircrafts hovered over Tafas while bombarding Daraa. However, on June 4, 2017, both the civilians Ahmed Suleiman al-Bardan and Hasan al-Mahameed were killed and several others injured because of artillery shells directed from Syrian regime sites in Daraa and landed in the center of the city. The following morning, on June 5, 2017, we were surprised that a warplane launched six successive air raids on the eastern areas of city followed by massive and consecutive explosions that shook the city and caused panic among civilians. It is worth mentioning that in the evening the city is witnessing a growing movement, especially in the holy month of Ramadan. As a result of the raids, 13 civilians were killed, including nine persons from outside the city, four of them were displaced and the rest were visitors to the city, as well as more than 25 civilians wounded. One of the raids targeted a vehicle driving civilians on the highway between Tafas and Dael, the vehicle contained a number of displaced people from outside the city, and all of them were killed on the spot, in addition to a number of passers-by. The identities of all the dead were not identified because of the charred and mutilated bodies. "

A member of the Civil Defense is pulling one of the bodies during the burning of a civilian vehicle in Tafas.
Photo credit: Syrian Civil Defense.

“On June 6, 2017, the day after the massacre, the regime forces committed a new massacre by shelling residential neighborhoods in the center of the city with rocket launchers targeted from the Municipal Stadium in Daraa. They killed four civilians, including three children identified as Rimas Adib al-Mesri, Ritaj Adib al-Mesri and Rafi Zaher al-ghazawi, injured many as well and caused massive destruction of civilian houses."

The children Rimas Adib al-Mesri and Ritaj Adib al-Mesri, who died because of shelling rocket launchers on Tafas on June 6, 2017.
Photo credit: activists from the city

It is well mentioning that the armed opposition elements are targeting the regime's sites in Daraa from the plains surrounding Tafas, which are several kilometers away from civilians’ houses.

Several neighborhoods in Daraa al-Medina like the Tariq al-Sad and Daraa refugee camp, controlled by the opposition forces since June 1, 2017, are witnessing a military escalation of the Syrian regime backed by foreign troops. The Syrian/Russian warplanes launched dozens of raids in addition to firing hundreds of Phil rockets, and measuring a new development, barrel bombs that contain incendiary materials, similar to incendiary napalm, are dropped by helicopters on residential neighborhoods in Daraa al-Balad, Daraa refugee camp and Tariq al-Sad.

On June 4 2017, helicopters dropped four barrel bombs on a residential neighborhood in western Ghariyah located in the east countryside of Daraa; killed two women identified as Asma Sobhi al-Baraetha and Suad Ahmed al-Aboud, and injured several others, including children.

On June 10, 2017, the Syrian regular army shelled rocket and artillery launchers on Nasib border crossing on the Syrian-Jordanian border, killed members of displaced family from Homs province identified as Khaled Ali Ramadan, the father and his 3 sons: Suleiman, Haneen and Iyad, and many civilians were injured as well.

Image of Khaled Ali Ramadan, the father and his two children who died in the Syrian regime shelling of Nasib border crossing in Daraa countryside.
Photo credit: activists from the city

"A major destruction of the neighborhood has been caused by indiscriminate shelling of various kinds of weapons since the beginning of the current month. However, the barrel bombs dropped by the Syrian government's helicopters caused large fires in the area and it was difficult for us to put them out.  When we were trying to put them out by water, the flames were increasing, and the incendiary materials were even melting iron. Most of the population displaced from this neighborhood as soon as they heard the news of reinforcements and the large military mobilization carried out by the regime in Daraa, as well as preparing for a ground attack. They headed to the east countryside of Daraa, and some of them were not fortunate enough to find a shelter so they set up tents near the Jordanian border to escape death. "

The burning of a house in Tariq al-Sad neighborhood after the fall of a barrel containing incendiary materials on June 11, 2017.
Photo credit: Nabaa Media Foundation

Mustafa al-Mahameed, the director of the Civil Defense in Daraa, said in a testimony to STJ that on June 12, 2017, helicopters dropped dozens of barrels that contained incendiary materials on civilian houses in the neighborhoods of Daraa refugee camp, Tariq al-Sad and the surrounding plains, and caused large fires. He added:

"Our fire trucks were useless, so we used powder, Foam material and sometimes dirt in order to put out the fire. Since the beginning of the current June until the eleventh day, we were able to document the fall of approximately 57 barrels carrying incendiary substances, as well as bombarding heavy military aircraft and dropping of hundreds of Phil rockets and artillery shells on areas controlled by the Syrian armed opposition. The bombardment has blocked us from many civilian homes that completely burnt down, causing massive destruction in the area. However, all the targeted neighborhoods were almost empty of people as no civilian casualties or injured were recorded."

The Director of the Civil Defense appealed "the international community to end the ongoing war that claimed the lives of massive numbers of civilians including women, children and elders and destroyed the infrastructure and to work to bring peace to the region."

The Syrian Civil Defense posted on June 13, 2017, a video tape showing fires caused by incendiary substances described as napalm; in addition, it posted other images about the same substance.

The following are images posted by the Syrian Civil Defense which show the incendiary weapons inside the barrel bombs that fell on neighborhoods of Daraa al-Medina. 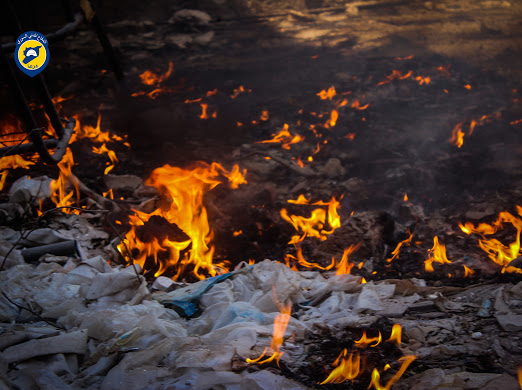 Nabaa Media Foundation published a videotape that showed the moments when barrels carrying incendiary materials fell on the neighborhoods of Daraa on June 11, 2017, and published another video tape showing fires inside the Omari mosque after several barrels fell on it, the source said it was incendiary napalm.

STJ documented the identities of civilians who died because of the indiscriminate shelling and the Syrian-Russian air raids on Daraa province since June 1, 2017 until June 12, 2017: