On February 26 and 27, 2019, the Air Force Intelligence Agency conducted an extensive raid and arrest campaign, targeting schools and residential neighborhoods. Several of the arrested students were released after their relatives paid sums of money 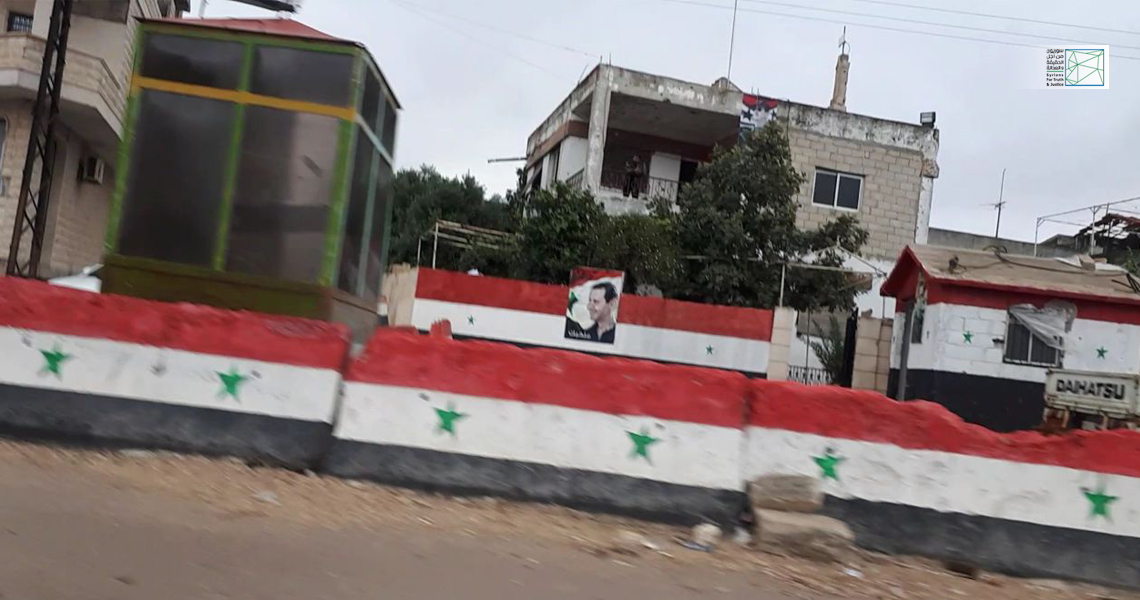 The headquarters of the Military Security Branch, the city of al-Rastan. Photo credit: STJ.

On February 26 and 27, 2019, Syrian security services arrested no less than 35 children/students in the city of al-Rastan, northern rural Homs, where they conducted raids and arrest campaigns, targeting schools and residential neighborhoods. This happened after photos, posted on social networking sites, went viral, pointing to the presence of the Harakat Ahrar al-Sham al-Islamiyya/Ahrar al-Sham in the area, which the Syrian regular forces controlled in May 2018.

The field researcher of Syrians for Truth and Justice/STJ for northern rural Homs said that photos of paper scraps went viral on social networking sites, taken in the two cities of al-Rastan and  Talbiseh. The scraps carried the dates 21 and 22 of February 2019, with the following phrases scribbled on them: “Harakat Ahrar al-Sham al-Islamiyya/al-Maghaweer/Commando Forces/ Abū Bakr aṣ-Ṣiddīq Regiment/ behind the enemy lines.” Triggered by this, the Air Force Intelligence Agency conducted an extensive raid and arrest campaign against several students at schools and residential neighborhoods.

It is important to mention that STJ did not publish the names of the schools and the residential neighborhoods targeted by the arrest and raid campaigns at the request of the area’s people and the eyewitnesses, fearing that they might be subjected to further harm.

A photo posted onto social networking sites on February 22, 2019, where the Talbiseh Bridge appears and the writing indicates the presence of the Harakat Ahrar al-Sham al-Islamiyya in the area.

Analysis of the visual evidence:

The blue circle indicates the location of the Talbiseh Bridge/ Houla diversion.

A close-up of the Talbiseh Bridge/ Houla diversion.

“On February 26, 2019, enclosed vehicles coming from the city of Homs were seen as boarded by elements in military outfits. The vehicles entered the city of al-Rastan through its southern entrance and raided four schools and numerous houses in three of the city’s residential neighborhoods. They led the arrested children, who they beat and insulted, to an unknown destination.”

On Saturday, March 2, 2019, a number of the detained children were released, some of their relatives said that they paid 200,000 Syrian pounds per relative in return for the release of the children. This was made possible by one of the city’s lawyers who played intermediary, given that the destiny of the rest of the children is yet unknown.

STJ’s field researcher pointed out that neither the immediate reason for the arrest of these children nor the charges against them are accurately known, for the administrations of the schools that have been raided and where the children were arrested are spreading information that the students have been captured either for stealing power cables or for fighting each other.

Commenting on the incident, a relative of one of the detained children told STJ’s field researcher:

“The son of my relative, a 16-year-old student, was arrested from the street near his house, with five other children. From the adjacent street, they arrested three children. From another street, they arrested two children. The arrests were conducted by the Air Force Intelligence Agency from Homs’ branch, backed by intelligence elements of the al-Rastan city’s branch, who have joined the forces only recently. Following the arrest of the children [I mentioned], others were arrested; as it seems that their friends have mentioned their names during the investigations. This triggered the intelligence service to undertake additional arrest raids at the schools in search of these names, for they have arrested about six children from the school of my relative’s son after two enclosed cars invaded it.”

The same eyewitness quoted one of the fathers whose son has been arrested, as saying:

“I went to the police station to ask about my son. They said that they were not keeping him and that they did not have an idea where he was. One of the people working there advised me to resort to a specific person, the name of whom the witness did not mention, and told me that this person could help me get my son out in return for 200,000 Syrian pounds. This did happen. I paid the money and my son was released.”

A woman, living near one of the schools that have been raided, said:

“I saw two enclosed cars enter the schoolyard; and the elements had military outfits on. I saw an element pushing one of the students down the stairs and beating him with his feet. I saw them arrest about ten students from the schoolyard.” 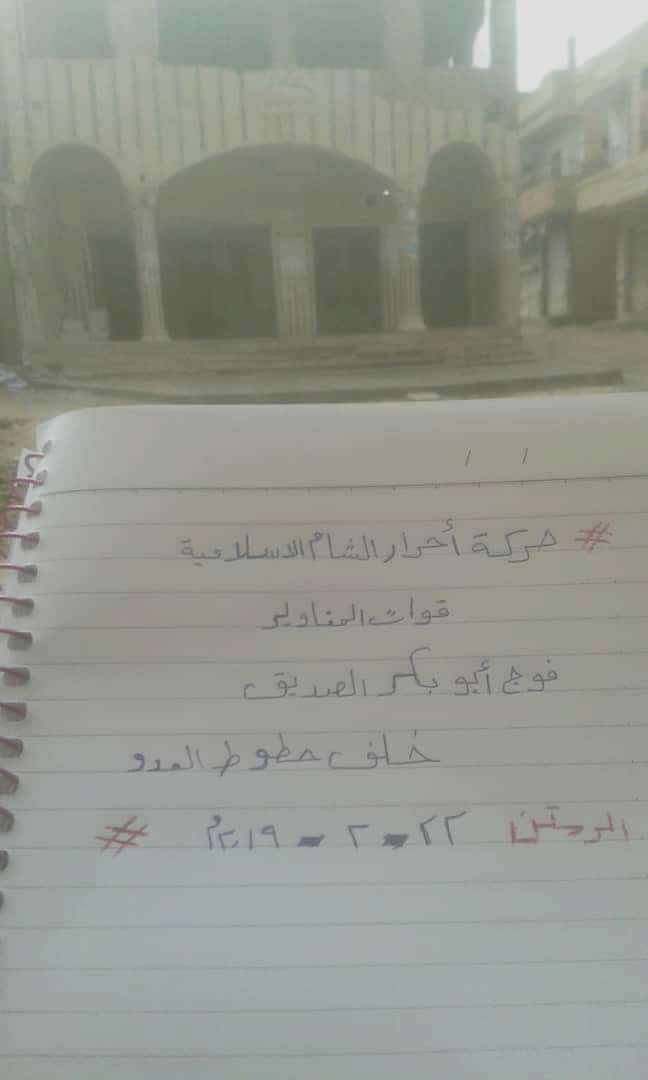 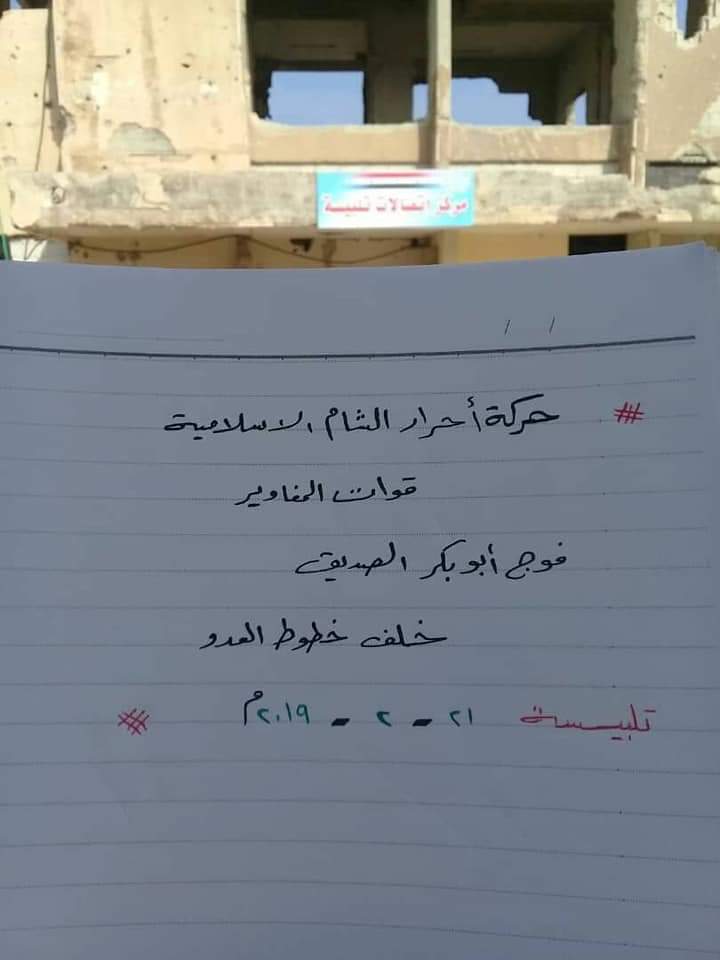 Two photos posted onto social networking sites on February 22, 2019; one of them is at the al-Omari Mosque in the city of al-Rastan, the second is at the Communication Directorate in the city Talbiseh. The writings scribbled on the papers refer to the presence of Harakat Ahrar al-Sham al-Islamiyya in the area.

STJ’s field researcher pointed out to the news reporting similar arrest raids in the city of Talbiseh, which resulted in the arrest of 10 students in mid-February 2019. However, STJ did not manage to verify these reports yet.