The Syrian Government has passed a resolution providing for either cautionary seizure or placing a cautionary lien on properties belonging to civilians in the two areas of Wadi Barada and Eastern Ghouta, Rif-Dimashq province 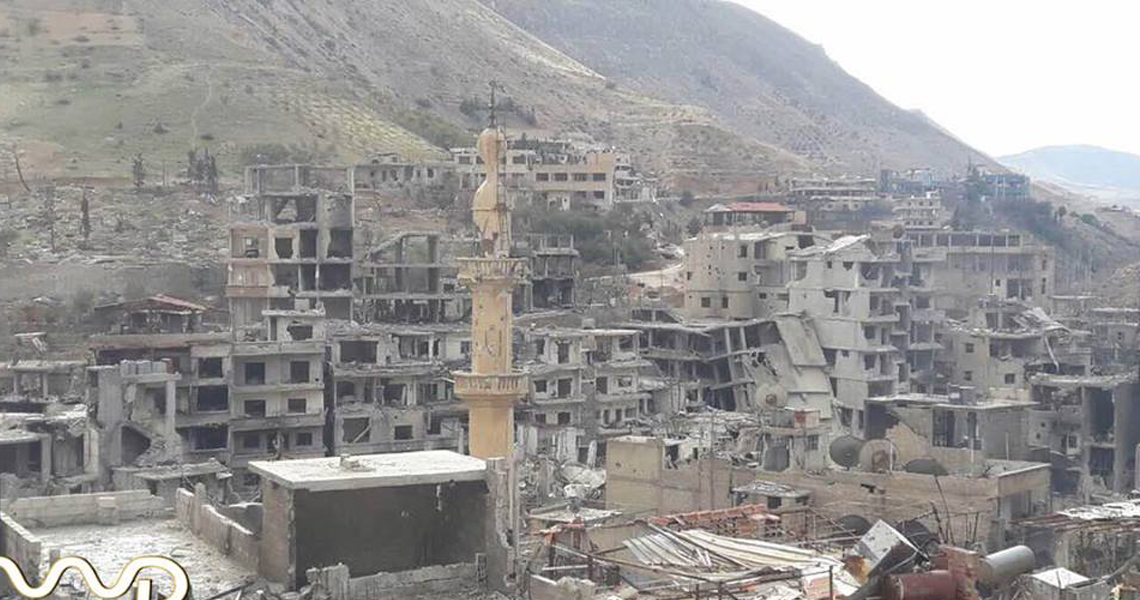 The Ministry of Finance, affiliated with the Syrian Government/Damascus, has ordered the cautionary seizure[1] or placing a cautionary lien[2] on properties the owners of which are people who have a political stance different from its own. In sync, Syrian security services have confiscated other properties, which belong to former leaders of opposition armed groups, in the two areas of Wadi Barada[3] and Eastern Ghouta, Rif-Dimashq/Rural Damascus province, in particular. Syrians for Truth and Justice/STJ came to know that the resolutions providing for cautionary seizure date back to October 2018; however, they have been generalized only lately. Several owners, whose properties have been seized, were surprised by the cautionary lien placed on their estates, which they discovered only by chance, upon conducting transactions relating to these properties in February 2019.

STJ’s field researchers have contacted several of these estates’ owners. The First Owner’s estate was subjected to “cautionary seizure.” The Second Owners’ estate, however, was marked with a lien. Both suffered the results of resolutions which they were not notified of in advance; ones that were enforced due to their anti-government political activates, as the two owners put it, being based in areas out of the government’s control. The Third Owner, for his part, is one of the persons/militants whose property has been confiscated.

STJ’s field researcher spoke to one of the owners, whose estates have been seized, the thing that obstructed a devolution of estate[4] transaction, which his family was pursuing.  He said:

“I left Douma city during the displacement campaign in 2018 to live in northern rural Aleppo. However, most of my relatives and family members stayed in Douma. Lately, my family embarked on the devolution of 15 estates, assigning an expeditor in the city to pursue the transaction; who, for his part, tried to obtain the remaining documents. When it was the turn of documents relating to me, a militant of the Military Intelligence Department told him that I was wanted and that the transaction cannot be finalized without my actual presence in the city. The militant also told him that it was to no use to attempt and grant a power of attorney to [another person] through the Syrian Consulate in Turkey, for I am demanded to show up in person and all the estates have been seized due to this.”

The witness pointed out that he has been delivered an official document by his relatives, indicating the seizure of his estates, the reason for the act and the side which placed the seizure lien. However, he refrained from revealing any details as not to put his family in danger.[5]

STJ’s field researcher pointed out to several similar cases, where security services have placed a seizure lien on properties belonging to persons known for their political opposition, who have been displaced from the area earlier on. The owners of these estates remain clueless of the status of their properties until they try to conduct real estate-related transactions, for these undertakings demand security clearances from numerous security services.

In one of these cases, eyewitnesses informed STJ’s field researcher in Douma city that the personnel of several security services confiscated buildings and houses belonging to Issam Buedany[6], dubbed Abu Humam, a commander of Jaysh al-Islam/al-Islam Army, and those belonging to his family members, both ascendants and descendants[7]. The act of confiscation covered houses of his own and others belonging to relatives, in addition to their cars. A whole other building, the ownership of which belongs to Sameer Ka’akeh’s[8] family, who functioned as a sharia scholar/Mufti under the same armed group, was also confiscated.

STJ’s field researcher stressed that the properties confiscated from the families of the al-Buedany and Ka’akeh are their original estates, which they have been holding title to a long before 2011.

In yet another confiscation case, STJ’s field researcher quoted a Douma-based eyewitness, who said that personnel of the Syrian Army, led by officers, have confiscated an agricultural land, 2 kilometers in the vicinity of Douma city, which they started cultivating after they dug a well – STJ failed to identify the type of crops planted. The land’s ownership belongs to a former medical staffer of Jaysh al-Slam, where he worked as a physiotherapist.

The Ministry of Finance of the Syrian Government’s Council of Ministers passed a resolution providing for imposing cautionary seizure on the movable and immovable money belonging to 11 persons from Rif-Dimashq province, on the allegation of proving their involvement in the terrorist activities the country is bearing witness to. The resolution was passed on October 28, 2018, and was generalized and hanged on the seized buildings only recently. Some of the people affected by the seizure’s order, as the testimonies obtained by STJ indicate, are civilians who participated in relief and healthcare-related activities – the resolution covered all their family members.

Mohammad Tamim al-Qaderi, reported STJ’s field researcher, is a former relief staffer and media activist. Ahmad al-Qader, on his turn, is a former ambulance driver, and Haytham al-Qaderi is a doctor. The rest of the people named by the resolution have never had any previous actions relating to the happenings in Syria, some of them are even based in Syrian government-held areas.

One of the persons, based in areas outside the control of the Syrian government, whose name is on the cautionary seizure’s list told STJ’s field researcher the following:

“My family and I were shocked with the seizure of our properties based on my participation in the anti-regime peaceful movements, for I was not involved in any acts of military nature; what I had done was limited to the fields of relief and healthcare.”

The resolution imposing cautionary seizure on the properties belonging to several people from Wadi Barada, Rif-Dimashq, hanged on one of the seized buildings. STJ was provided with the photo by one of the listed persons.

It is important to mention that this is not the first time that a resolution provides for the cautionary seizure of properties owned by people from Wadi Barada, for on February 4, 2018, the Ministry of Justice, under the Syrian Government, has passed Resolution No:33, which facilitated for freezing the movable and immovable financial assets of no less than 117 persons, some of whom are from Wadi Barada, Maddaya, Daraya and other provinces.

STJ published a report[9] on several cautionary seizure resolutions, passed by the Syrian Ministry of Finance against anti-Syrian government figures, while the Deputy Minister of the same ministry stated that more than 27 thousand orders of cautionary seizure have been made in 2016 and 2017, the value of the seized properties amounted to about 13 billion Syrian Pounds.[10]

[1] Cautionary seizure is placing the money of the debtors at the disposal of the judiciary system, which is usually the specialty of the court. Nonetheless, this was subjected to amendments under Decree no.63 for 2012, where the Minister of Finance was given the power to impose cautionary seizure or place a cautionary lien on the money of perpetrators of crimes relating to the state’s security or the crimes reported by Decree no.19 for 2012. STJ’s legal consultants pointed out that the mentioned decree has transferred one of the judiciary system’s powers to a legally incompetent executive authority and that the crimes relating to terrorism and state security are of an overly broad meaning and are not explicitly defined in the law, not to mention the difficulty at assessing them.

[2] Cautionary lien is placed on the properties of the debtors to indicate their relation to judicial cases. The lien is considered as the initial phase of the cautionary seizure of estates; where the line is placed first, and then it shifts to executive /cautionary seizure which usually the court, concerned with the case, orders. For further information, refer to footnote no. 1.

[3] Wadi Barada district is located to the west of the capital Damascus. However, it is administratively affiliated with Rif-Dimashq/Rural Damascus province and includes 13 towns and villages.

[5] STJ managed to confirm that the owner had no affiliation with any armed group what so ever and that he was an activist in a Syrian humanitarian organization.

[6] Issam al-Buedany, known as Abu Humam al-Buedany, was born in 1971. Today, he is the commander of the Syrian armed opposition-affiliated faction of Jaysh al-Islam/al-Islam Army, where he was assigned thus on December 25, 2015, as a successor of Zahran Alloush, who died, along with two of his companions, in a raid that targeted his procession in Damascus. Al-Buedany has occupied several positions in Jaysh al-Islam, the most important of which are the Commander of Operations and the Commander of Brigades.

[8] Sameer Ka’akeh, born in Douma city in 1963, is known as Abu Abdulrahman and is considered one of the top commanders of Jaysh al-Islam, serving as the Director of its General Sharia Committee.