On February 16, 2019, the ban was passed, providing for the persecution of the persons who help middle school students apply for the Syrian government’s test centers

On February 16, 2019, the Ministry of Education of the Salvation Government passed a resolution providing for denying the students, who are applying for the ninth grade/elementary/middle school exams for the school year of 2018/2019 at the Syrian government’s test centers, access to high schools in HTS-held areas, and which the Salvation Government supervises. The resolution also necessitated the prosecution of persons proven to have helped students in applying for exams at the Syrian government’s test centers. The resolution no. 192/R carried the signature of the Minister of Education Abdulhafiz Jawad.

Concerning referral to justice and the ensuing consequences, Mulham al-Ahmad, a member of the Salvation Government’s Media Office, said the following:

“That who violates the resolution shall be referred to our system of justice at the Salvation Government, where the rulings of Islamic Sharia are applied. The sentence or the penalty is the specialty of the judges.”

The field researcher of Syrians for Truth and Justice/STJ spoke to Ali Qassoum, the director of the Examinations Department of the Free Education Directorate, who gave an account of the numbers of the students affected by the Salvation Government’s resolution:

“For the school year of 2018/2019, the number of students who are supposed to take exams as to obtain the elementary/middle school diploma at the Free Education Directorate- independent and having affiliation with neither of the sides on the ground- is about 20,000 male/female students; for high school diplomas, whereas, the number is estimated with about 10,000 male/female students. These estimates are based on the number of last year’s test takers.”

STJ’s field researcher said that the Free Education Directorate is affiliated with neither political nor military entities and is funded by international and relief organizations within the frame of annual projects. Some of the schools it runs are operating without any source of funding whatsoever, while others are partially funded. Even though HTS has taken over the area military speaking, under which the Salvation Government controlled it in terms of services, the latter did not directly or explicitly interfere in the work of the Directorate of Education so it would not lose the funding. 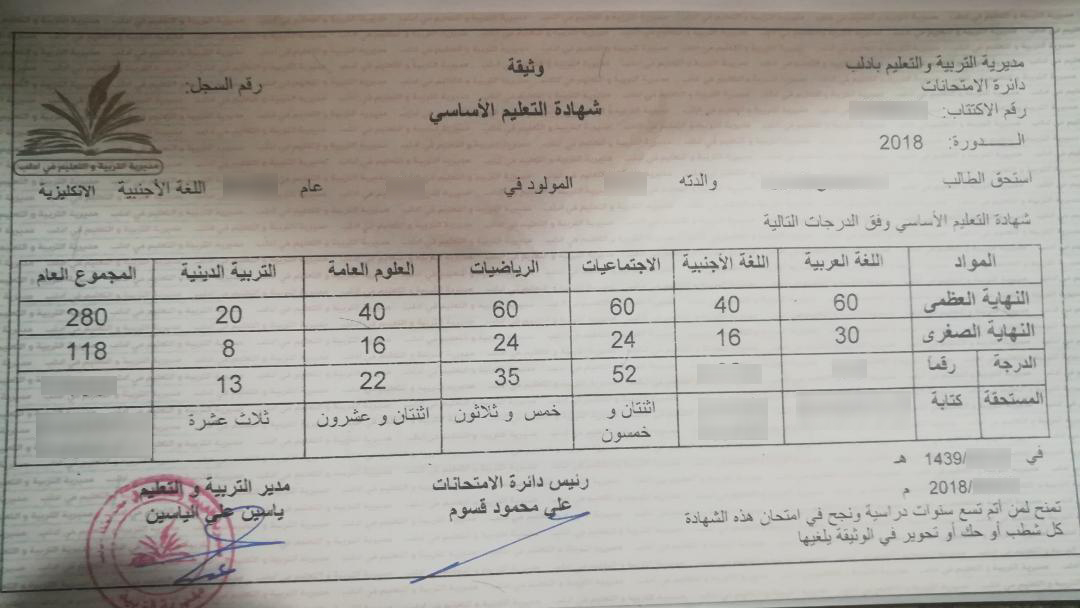 An image of an elementary/middle school diploma issued by the Free Education Directorate for the school year of 2018. Photo credit: One of the witnesses interviewed for the report

•    Previous Bans on Pursuing Education that have been Resolved with Money:

STJ’s field researcher spoke to a number of tenth grade students, first year in high school, based in Idlib, in the city of Ariha in particular,  who all have been granted the elementary/middle school diploma last year, 2017/2018, by the Ministry of Education of the Syrian Government; the students said that they were prevented from studying the tenth grade at the area’s schools and that the Free Education Directorate has refused their diplomas, which came as a surprise and after two months from the new school year’s beginning.

The students added that they were forced to pay money, 20,000 Syrian pounds in certain cases, to the Free Education Directorate in return for its recognition/allowing them to pursue their education based on the diplomas issued by the Syrian Government.

A number of the students’ relatives, whose children have taken exams at the Syrian Government’s test centers to obtain these two diplomas, said that they are faced with the same challenge at the start of every school year, where the recognition of their children’s diplomas turns into a matter of controversy. They pointed out that the refusal of the diplomas issued by the Syrian Government is not a new thing that the Salvation Government does, for the Free Education Directorate had previously imposed the same resolution and had repeatedly reneged on it. But still, this is the first time where an early warning is issued against taking exams at the Syrian regime’s test centers and penalties imposed on people in this respect.

“Though based in Ariha, I took the middle school tests at the Syrian Government’s centers. Every time I went to take a test, I did while extremely afraid of being arrested at any of the checkpoints I come across, regardless of being a student. I passed, despite all of this, and was granted the diploma. I wanted to pursue my education and enrolled in a high school in the area of Ariha. Two months from attending school as a tenth grader, I was surprised that the Free Education Directorate has refused my diploma. We referred to the education compound in charge to solve the problem. In the end, we reached an agreement, where I had to pay 20,000 Syrian pounds, supposedly the price of a copy of the ninth grade curriculum and the fee of getting the diploma of the Free Education Directorate. It is good that the matter ended this way.”

In an incident similar to Mohammad’s, Aya’s father narrated the details of what his daughter had to go through:

“My daughter, Aya, took the test at the regime’s centers and passed. In the same year, she also took the test of the Free Education Directorate and passed. When she started the tenth grade, I was taken aback, along with other relatives, that the Directorate of Education in Ariha has decided to terminate our children’s diplomas and to prevent them from studying on the pretext of taking the tests at the regime’s centers. This was sudden and without notifying [us] since the beginning of the school year of their refusal to acknowledge the regime’s diplomas. Following a heated disagreement and contention, the Directorate decided to recognize the diplomas, once again, and to grant our children its diploma in return for 20,000 Syrian pounds for each student. We do not know what for. We decided to pay so Aya would not lose a school year for no reason!.”

STJ’s field researcher pointed out that the Salvation Government is today in control of services in the full range of Idlib province and areas in the two provinces of Aleppo and Hama, after HTS militarily controlled these areas on December 20, 2019, following military clashes that involved it and armed opposition groups, namely the Ahrar al-Sham al-Islamiyya/Ahrar al-Sham and the Suqour al-Sham/ Sham Falcons Brigades.

The Salvation Government has also passed numerous resolutions concerning matters relating to services and the civilians’ interests, in addition to which it put many other resolutions into force in the areas it recently controlled while they used to apply only to the city of Idlib before.[3]

[1] On October 7, 2017, the formation of the “Salvation Government” was announced as to run Idlib province and the areas under the control of HTS. The Salvation Government has emerged from a “Constituent Assembly,” which, in its turn, resulted from the “General Syrian Conference” that HTS called for on September 17, 2017, and all the sessions of which and that of the Government’s foundation, were conducted in Bab al-Hawa, a border crossing with Turkey.

[2] On January 28, 2017, several jihadist factions in Syria’s north announced integration under “Hay'at Tahrir al-Sham/HTS”. The factions that dissolved themselves and joined together under the new name were (Jabhat Fatah al-Sham-previously known as al-Nusra Front- Nour al-Din al-Zenki Movement, Liwa al-Haqq, Ansar al-Din Front, al-Sunna Army). Nonetheless and due to the confrontations that broke out between the Ahrar al-Sham Movement and HTS on July 15, 2017, the Nour al-Din al-Zenki Movement announced its separation from HTS on July 20, 2017.