Mohammad al-Eter, a militant of the al-Sham Legion, was killed after being tortured for more than 6 hours in a row in a security detachment, and Muhanad Theyab , a civilian, was tortured and killed, on the accusation of affiliation to the Syrian army

Between January 20 and February 4, 2019, two cases of killing under torture were recorded in the prisons of the armed opposition groups, operating under the Syrian National Army[1] in the two areas of Afrin and Jarabulus. The first case was committed against a militant of the al-Sham Legion, whose murder case’s verdict was passed by a Sharia Arbitral Tribunal; the second is that of a civilian killed under torture, whose case is yet being investigated, for his family has filed a lawsuit, according to testimonies obtained by Syrians for Truth and Justice/STJ.

I. The Case of Muhand Theyab al-Qasem: A Civilian Killed under Torture in a Prison Affiliated with the Military Police in Jarabulus:

On February 4, 2019, the young man Muhanad Theyab al-Qasem was killed under torture during his detention in the headquarters of the Military Police[2], under the Ministry of Defense of the Syrian Interim Government, on the charge of being a soldier of the Syrian regular forces, after he was subjected to severe torture by officers affiliated with the Harakat Ahrar al-Sham al-Islamiyya/Ahrar al-Sham, following his arrest at the Own Al-Dadat checkpoint  while on the way from Homs through the Manbij roadway.

STJ’s field researcher spoke to an eyewitness who was close to the murdered civilian Muhanad al-Qasem. Refusing to reveal his identity for security considerations, he narrated the details of the incident:

“Muhanad’s family communicated with me and asked me to transport him from the area of Houla, Homs province [the location of his military service], to the city of Jarabulus. Mohammad was a recruit of the Syrian Army/Syrian regular forces since 2012; he was discharged from the compulsory military service in 2018, knowing that he served in rural Sweida. He was then again called to perform the reserve military service, due to which his family asked me to transport him from Homs to Jarabulus. I actually did. I secured him a car, which transported him from Homs to Aleppo within the areas held by the Kurdish Autonomous Administration, and then to the Own al-Dadat checkpoint, which connects the areas controlled by the Autonomous Administration and those of the Euphrates Shield’s armed groups. Muhanad passed through dozens of Syrian regular forces-affiliated checkpoints and others of the Autonomous Administration. At the Own al-Dadat checkpoint, run by Ahrar al-Sham, the official, a person called Abu Qusai Haboush, said that he was wanted for being a soldier of the regime, which is incorrect.  Abu Qusai arrested him and demanded that we pay a $1000 to release him, which we refused to pay. He held him captive at the headquarters of the Military Police in Jarabulus. I tried to visit him for ten days and was denied the visit until February 2, 2019, when Sergeant Ausama told me that I could visit him on Sunday. I went there and obtained a 500 Syrian pounds visit receipt. I also took clothes and food with me. I saw Muhanad for five minutes. He was exhausted and showed the marks of a severe beating. He seemed swollen and bruised. The officer in charge of the visit, Sergeant Abu Hamza, did not allow us to talk about anything. He also did not allow him to take the food or clothes. He prevented him from talking to his father on my phone. So, I spoke to Muhanad’s father and told him that he was fine. And then, I talked to a person called Abu Khalid, the register of the military judge. He promised me that, in four days, we can lodge a petition for Muhanad’s release, after which he would be set free.”

“On Sunday, around 12 am, Sergeant Ausama called me and asked me to show up at the headquarters of the Military Police. I did. There, he told me that Muhanad was very ill and that he needed medicines. I bought him Profine tablets and antibiotics and went back home. Half an hour later, Muhanad’s father called me and informed me that Muhanad died and that a person from Colonel Ahmad Othman’s side has informed him of Muhanad’s death. A few minutes later, Sergeant Ausama called me again and asked me to go to the headquarters of the Military Police to receive the dead body. There, I saw the report of the coroner, in which he wrote that the death cause was kidney failure due to cold, which is false. I refused to receive the dead body until doctors, chosen either by me or the murdered person’s family, could come. The sergeant refused, and Muhanad’s father called me and asked me to receive the dead body and bury it. I did, accompanied by one of Muhanad’s relatives.”

The eyewitness said that the persons accountable for the murder of Muhanad Theyab al-Qasem are: “Abu Qusai Haboush, the director of the Own al-Dadat checkpoint, the sergeant Abu Kifah and Abu Sham Shamiyeh, who operate under the Military Police and are affiliates of Ahrar al-Sham.”

2. The Reaction of the Murdered Person’s Family and Filing a Lawsuit:

The eyewitness, above mentioned, said that Muhanad’s family is based in Afrin region and has decided to file a lawsuit, duly authorized, against the people responsible for the murder of their son in the Military Police and against the coroners who signed the coroner’s report of Muhanad’s dead body. STJ did not manage to get a copy of the coroner’s report, and it will present it once obtained, along with the case’s progress details.

On social networking sites, activists posted a video of Muhanad Theyab al-Qasem’s body; swelled, it clearly shows the marks of beating and torture. The photos below were extracted from the video. 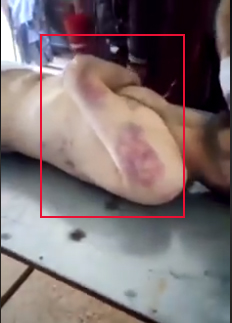 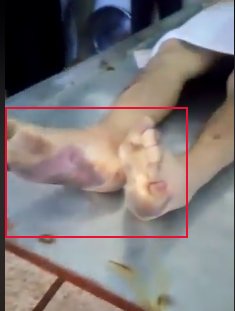 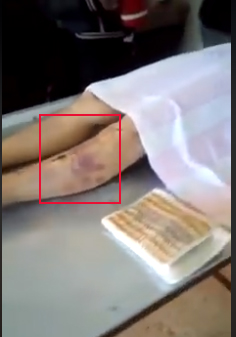 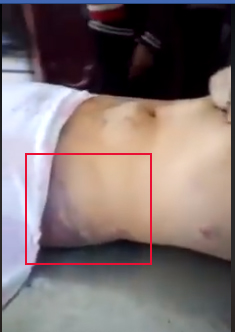 II. The Case of Mohammad al-Eter: A Militant Killed in a Prison Affiliated with His Armed Group, the al-Sham Legion, in Afrin:

On January 21, 2019, militant Mohammad al-Eter, operating under the al-Sham Legion, was tortured to death in one of his armed group’s prisons in the village of Meidan Ekbis, Afrin. He was tortured by a number of jailors and investigators on the charge of theft. Founded specifically to preside over this case by the al-Sham Legion, the Sharia Arbitral Tribunal sentenced the persons held accountable for al-Eter’s death to prison and ordered them to pay blood money, for the Tribunal addressed the case as a homicide with quasi-deliberate intent and passed the sentence on February 5, 2019.

STJ’s field researcher spoke to a person informed of the case’s progress and close to the murdered militant. Refusing to reveal his identity for security considerations, he said:

“During the confrontations between Hayat Tahrir al-Sham/HTS and a number of the armed opposition groups, elements of HTS and a group of the al-Sham Legion indulged in skirmishes in the village of Deir Ballut on January 3, 2019. In the skirmishes, the commander of the group, called Mohammad al-Abrash, was killed. When his dead body was taken to the Legion’s headquarters, the body was found to have been robbed, for the commander’s personal gun and a sum of money he possessed were stolen; the finger of blame was pointed at the militants of his group and several of them were arrested. Investigated, the elements confessed the theft and said that Mohammad al-Eter conducted the robbery. The stolen possessions, which they kept, were obtained, and Mohammad al-Eter was summoned for investigation.”

“At the Legion’s detachment, located in the village of Meidan Ekbis, Mohammad al-Eter was subjected to continuous torture from 7 pm to 2 am. Four people took turns on torturing and investigating him, under a direct order from the security detachment’s Director Ahmad al-Hassan Abu Abdullah. Mohammad al-Eter was stubborn and did not admit anything until he died under torture.”

Another eyewitness, who was detained with Mohammad al-Eter and witnessed his death, said:

“I was imprisoned with Mohammad al-Eter due to a fight I had with another person. I witnessed the torture he was subjected to. They hanged him from the prison cells’ door. Every 15 minutes, a person would come in and beat him. They took all his clothes off, except for his underwear; they also opened the windows, knowing that the weather was extremely cold. Mohammad asked me to help him drink water and to take him to the bathroom. I told him that if I were to take you to the bathroom, they would be hanging me in your place. Mohammad could not hold it longer and wet himself. Around 2 am, I felt that he was on the verge of death; I watched him until he died. I was summoned for the investigation concerning the incident; I testified all that I saw, and told them about the elements, on the shift, who beat and tortured him.” 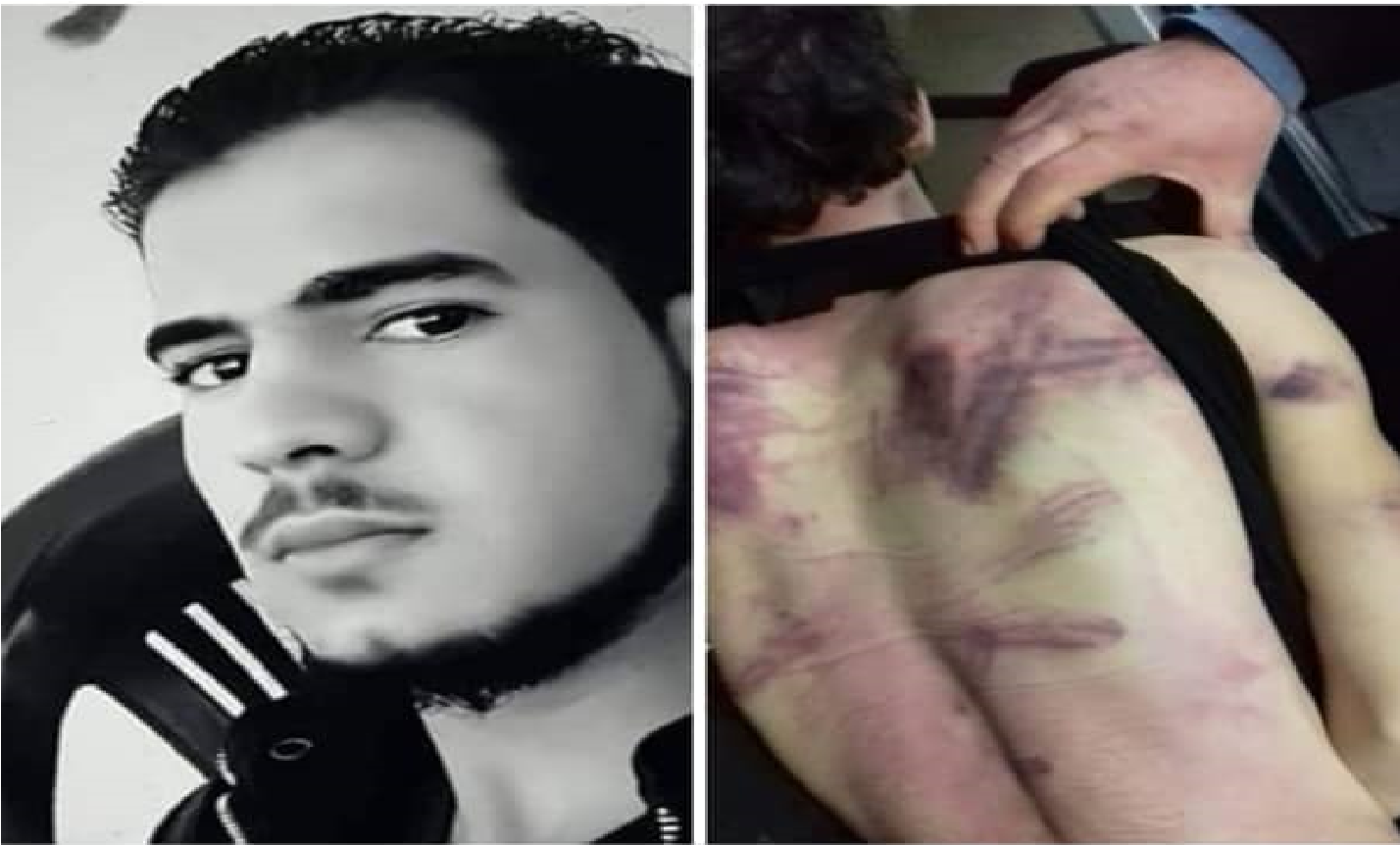 An image circulated by activists in Afrin, Aleppo, which they captioned as the dead body of militant Mohammad al-Eter, who was tortured to death by the al-Sham Legion.

Activists in the area published a photo, saying that it is of the dead body of Mohammad al-Eter, showing the marks of torture.

Mohammad al-Eter is a 22-year-old militant of the al-Sham Legion from the city of al-Qusayr, Homs. His family members are refugees in the Arsal Camp, Lebanon. Reacting to the death incident, Homs community leaders in Afrin demanded that the perpetrators be given in and be held accountable. Answering the demands, the al-Sham Legion ordered that the security director be relieved of his duties and a committee be founded to investigate the case.

2-The Formation of a Sharia Arbitral Tribunal and the Ruling:

The al-Sham Legion formed a special Sharia Arbitral Tribunal to preside over this case in particular, consisting of four faith leaders/scholars/sheihks; one is independent while the other three are clerics of the armed group, in addition to tow lawyers. These have investigated the case and passed the sentence, in the following manner:

The sentence was passed on February 5, 2019, consisting of paying the blood money of the homicide with quasi-deliberate intent, 48 kilograms of silver, the equivalent to $24,000, to be paid by all the persons convicted of the murder, in addition to varying periods of imprisonment, which came as thus:

Article 1: The criminalization of the defendants in the torture case that resulted in death, described as a homicide with quasi-deliberate intent, who are:

Article 2: Committing the defendants to pay the maximum amount of blood money, estimated as 48 kilograms of silver, the value of which is the equivalent to $24,000, to be distributed to the hires of the murdered militant Mohammad Ihssan al-Eter, according to the inheritance shares of each of the hires.

Article 3: In respect of the blood money, the defendants are to pay the following percentages, each according to his role in the crime, either for being a cause to the murder or for the direct act:

Article 4: For the acts of torture, which stand in opposition to the Islamic Sharia and the humanitarian ethics, the above-mentioned defendants, each according to his role and responsibility, is to be sentenced to the following periods of imprisonment: 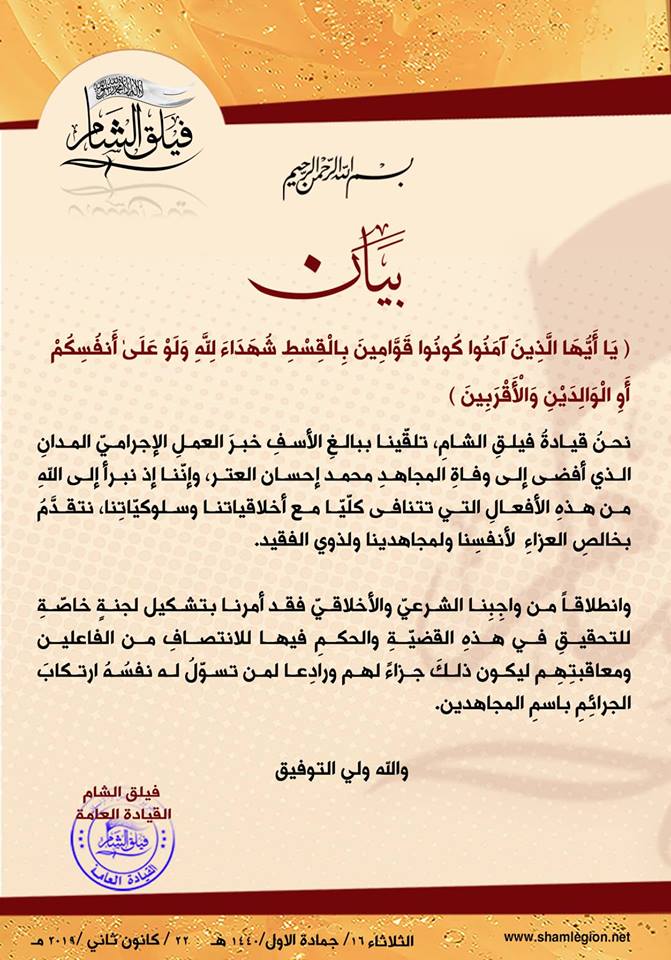 A copy of the al-Sham Legion's statement, which ordered the foundation of a special Commission of Inquiry.

[2] It was formed on February 20, 2018, in northern and north-eastern Aleppo as to put an end to the violations committed by the elements of the National Army. Founded by the Ministry of Defense of the Syrian Interim Government; it is led by Mohammad Shaikhli and is stationed in the city of al-Bab, consisting of two branches, one in Jarabulus and the other in Azaz.