Three Doctors Captured from the Directorate’s Building, in Kafr Nabl town, when Raided on December 11, 2018

On December 11, 2018, Hay'at Tahrir Al-Sham/ HTS stormed the building of the Free Hama Health Directorte of the Syrian Interim Government, located in Kafr Nabl, southern Idlib, and arrested three doctors while they were holding a meeting, on various charges including "moral turpitude", according to a detailed testimony given to STJ.

STJ's field researcher talked to a Free Health Directorate worker who witnessed the incidents, on December 11, 2018:

"On Tuesday morning, 11 December 2018, there was a meeting between hospitals administrators and the head of the Directorate in the directorate building when five military vehicles with HTS flags stopped there and masked gunmen got out and started firing live bullets in the air instilling terror among the workers who lowered under their desks to take a shelter. The gunmen of HTS entered the building, closed its door, held the workers in one room and seized their computers then headed to the administration office, where the meeting was held, they beat and humiliated the doctors, especially Dr. Murhaf Rad'doun who was severely beaten for refusing to give them his mobile. The doctors were taken to an unknown place after seizing their cell phones and personal cars along with two Directorate vehicles.", the worker said.

According to the witness, the detained doctors are: Maram Al-Sheikh, the head of the Directorate and the only vascular surgeon in northern Syria, Murhaf Ra'doun, the managing director of Qalaat Al-Madiq emergency hospital and Mustafa Al-Masri, the director of Sham hospital, noting that these two hospitals work under the Free Hama Health Directorate.

The main reason behind the detention incident, according to local activists, was the alleged administrative order issued by the Directorate which prevented hospitals affiliated to it from treating HTS’ injured fighters during the recent battle with Ahrar Al-Sham movement.

For its part, Ibaa News Agency of HTS offered a different account about the reasons behind detentions. The security official Ali Al-Ahmad said in his statement that the doctors accused of 'moral turpitude' and indecent acts like exploiting women for sexual purposes, stealing medical equipment and attempting to move the headquarter of the Directorate outside HTS areas.

Regarding this, the witness told STJ that an internal order was issued a while ago on moving the Directorate headquarter form Kafr Nabl to Qalaat Al-Madiq in Hama without explaining the reasons, knowing that Kafr Nabl is held by HTS while The National Front for Liberation controls Qalaat Al-Madiq.

The witness added that HTS released "Maram Al-Sheikh", the head of Health Directorate, the following day after forcing him to sign a written pledge to not move the headquarter from Kafr Nabl. 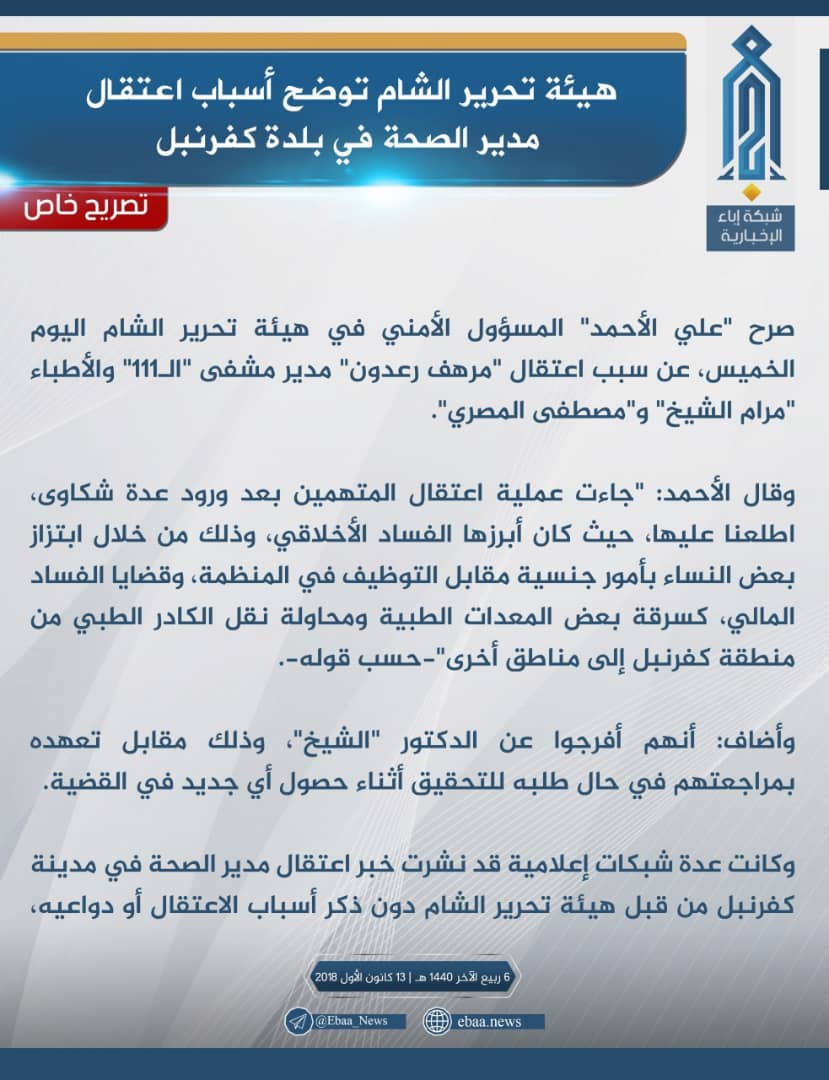 The statement published by Ibaa News Agency of HTS on raiding the building of the Free Hama Health Directorate in kafr Nabl, Idlib, on December 11, 2018.

The Free Hama Health Directorate has been looted and plundered by unknown gunmen earlier in November, and those incidents were reported by STJ in details.

It’s worth mentioning that the Directorate was established in April 2014, and has 18 subordinate facilities including hospitals, dispensaries and vaccination centers inside and outside Hama.