The US Must Take a Stronger Position on Human Rights Abuses in Occupied Afrin, Tal Abyad, and Ras al Ayn

42 organizations call on the United States to impose sanctions on and end military and political assistance to groups and individuals responsible for human rights violations in Turkish-occupied areas of northern Syria, and conduct fact-finding efforts in these regions 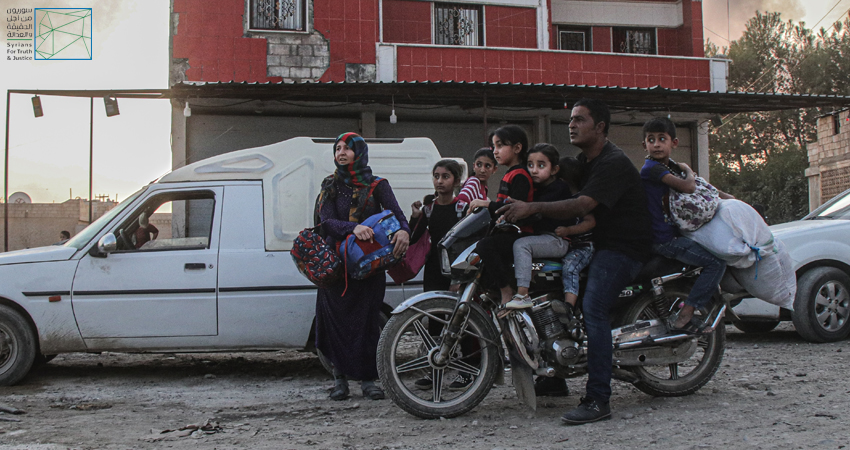 The first wave of population displacement from the city of Ras al-Ayn/Serê Kaniyê after being bombarded by Turkey in the context of its Operation Peace Spring. Taken by: Ivan Haseeb on 9 October 2019. Credit: STJ.

On September 15th, the United Nations Commission of Inquiry on Syria released its biannual report. The report included extensive evidence of brutal human rights abuses targeting ethnic and religious minorities, women, and other vulnerable groups in Turkish-occupied Afrin, Tel Abyad, and Ras al Ayn, and found that many of these violations amounted to war crimes.

The Commission underlined Turkey’s legal obligations under Common Article 2 to the Geneva Conventions and the Hague Regulations of 1907, noting its “responsibility, to as far as possible ensure public order and safety, and to afford special protection to women and children.”

Such findings by the Commission are in line with the ceasefire agreement signed between Turkey and the United States on 17 October 2019, whereby “Turkey expressed its commitment to ensure safety and well-being of residents of all population centers in the safe zone controlled by the Turkish Forces”. In that same agreement, the United States and Turkey agreed to “uphold human life, human rights, and the protection of religious and ethnic communities” in areas covered by the agreement, including Tel Abyad and Ras al Ayn. The UN findings show that Turkey is clearly violating its commitment to these provisions of the agreement.

In addition, the Commission stated that in areas under its effective control, Turkey “remains bound by applicable human rights treaty obligations vis-à-vis all individuals present in such territories”, citing the Advisory Opinion of the International Court of Justice. Human rights cases related to grave violations by Turkish-backed forces in Syria are admissible before the European Court of Human Rights, as Turkey has ratified the convention.

The Commission also warned that Turkey was aware of these abuses, and could be held responsible for allowing them to take place, in particular as “collaboration and joint operations between Turkey and the Syrian National Army for the purpose of detention and intelligence-gathering” continued to take place in such regions.

“In this regard, the Commission notes the allegations that Turkish forces were aware of incidents of looting and appropriation of civilian property and that they were present in detention facilities run by the Syrian National Army where the ill-treatment of detainees was rampant, including during interrogation sessions when torture took place. In failing to intervene in both cases, Turkish forces may have violated the above-mentioned obligations of Turkey.”

Evidence of these abuses was also put forward by the U.N. Office of the High Commissioner for Human Rights. On September 18th, U.N. High Commissioner for Human Rights Michele Bachelet warned that Turkey could be held responsible for rights violations in the occupied areas. “I also call on the Turkish authorities to respect international law and to ensure that violations committed by armed groups under Turkey’s effective control cease,” she stated.

Bachelet urged Turkey to conduct an “impartial, transparent and independent investigation” into abuses documented by the report, account for the fate of detainees, and hold perpetrators accountable for possible violations of international law.

We support the U.S. State Department’s strong statement about violations committed by the Syrian government that were also documented in the report. However, we note with deep concern that, despite now having evidence from an impartial international body that reports on human rights abuses by all parties to the conflict, the United States has ignored abuses committed by Turkey and the SNA, and did not comment on reports of such violations.

Turkey has already refused to acknowledge evidence of wrongdoing on the part of armed groups that it supports, and has denied all responsibility.  It is clear that, if there is no real pressure and international accountability, Turkey and the SNA will continue to commit crimes against Kurds, Yezidis, Christians, women, and other groups. Therefore, we call on the United States to: