Syria: Urban Scheme for Jobar – a New Attempt to Seize Residents’ Properties Based on Legislative Decree No.5

Regulating properties on the basis of various laws is a part of a broader governmental policy that aims at social re-engineering of Syrian areas, especially those surrounding the capital (Damascus)

September 1, 2022 467 views Download as PDF This post is also available in: Arabic Font Size A A A 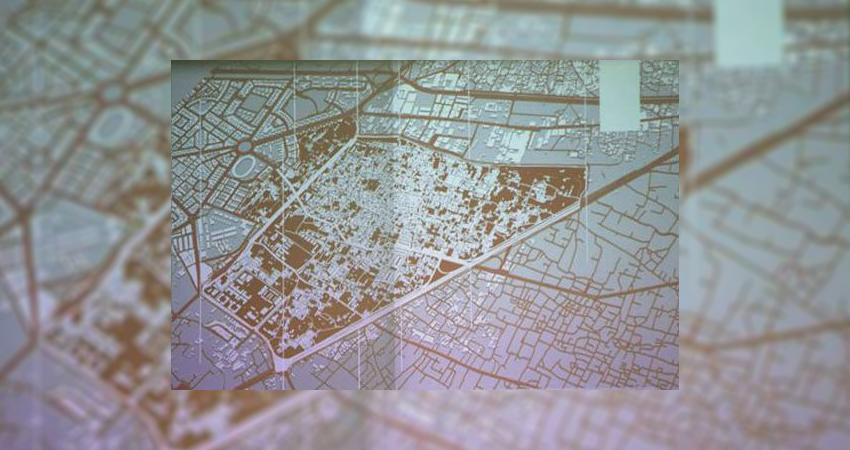 A map of Jobar and surrounding areas taken from a report by SANA on issuing a detailed organizational chart for these areas.

On 28 June 2022, the Syrian Arab News Agency (SANA) published on its official website a news story about the detailed urban scheme for Jobar and its vicinity, stating that Damascus Governorate had issued the detailed urban scheme No. 106, which aims at modifying the urban character of the following plots: (Jobar, Qaboun, Aqsaab Mosque neighborhood, Irbin, Zamalka and Ein Tarma).

In this context, the term “urban character” means that the administrative units (Damascus governorate or municipality) determine the purpose of establishing or planning a real estate area, and allocate it to a specific activity, such as residential, industrial, commercial or areas designated for financial services. However, the urban scheme did not specify the nature of the urban character in the areas referred to in the news.

The news story mentioned a statement by Engineer “Hasan Traboulsi”, the Director of Urban Planning in Damascus Governorate, explaining that urban scheme No. 106 was announced in the lobby of the Damascus Governorate building. Moreover, stakeholders can review the scheme and submit their objections within 30 days after the initial announcement.

Traboulsi stated that all objections will be reviewed and addressed by the Regional Committee in accordance with the provisions of Decree No. 5 of 1982 and its amendments, i.e. Law No. 41 of 2002.

STJ previously published a detailed report on “the Consequences of New Urban Plans in Alhajar Al Aswad, Sbeneh, Jaramana, and Yalda”, based on Decree No. 5 of 1982. The report found that “the Syrian government’s urban planning of affected areas in Damascus’s countryside is based on misleading laws which may impede Syrians from protecting their properties”. 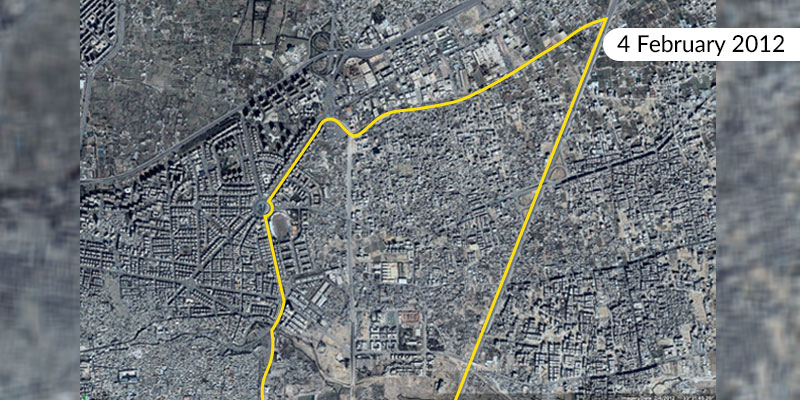 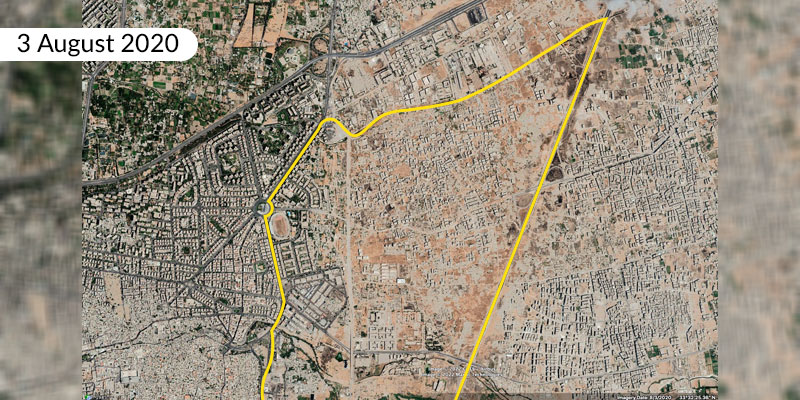 Two satellite images showing the extent of destruction in the Jobar, in Damascus, taken between 4 February 2012 and 3 August 2020

The urban planning of the Jobar region is another of the Syrian government’s policies which aims to seize Syrians’ real estate. Today, most of the residents of the area included in the new urban plan are internally or externally displaced as a result of military operations between the Syrian regular army, the Syrian armed opposition groups, and other armed groups.

On the other hand, STJ believes that planning and re-planning the areas constructed over real estates is a part of a broader policy aimed at social re-engineering of several regions in Syria, especially, opposition areas in the vicinity of Damascus city.

This prompted the government to issue several decrees and laws such as Legislative Decree No. 66 of 2012, Law No. 10 of 2018, and Legislative Decree No. 237, which framed plans for the construction of “zoned areas” at the Northern entrance of Damascus (Qaboun and Harasta), according to the detailed urban scheme No. 104. This was followed by the issuance of similar plans for Alhajar Al Aswad, Sbeneh, Jaramana, and Yalda based on Decree No. 5 of 1982, which is another episode of seizing Syrians’ properties. 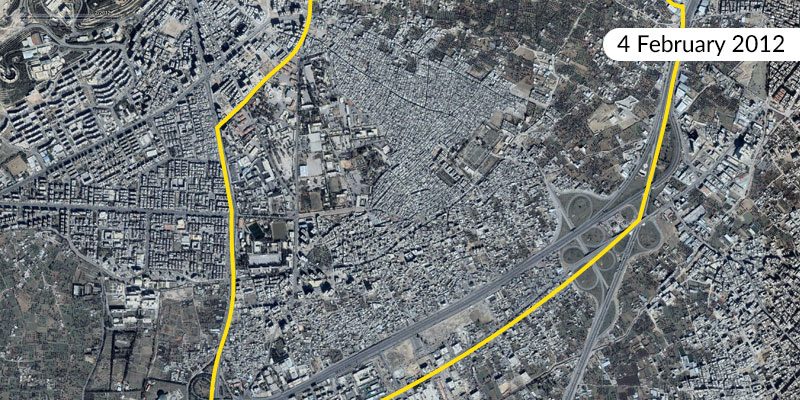 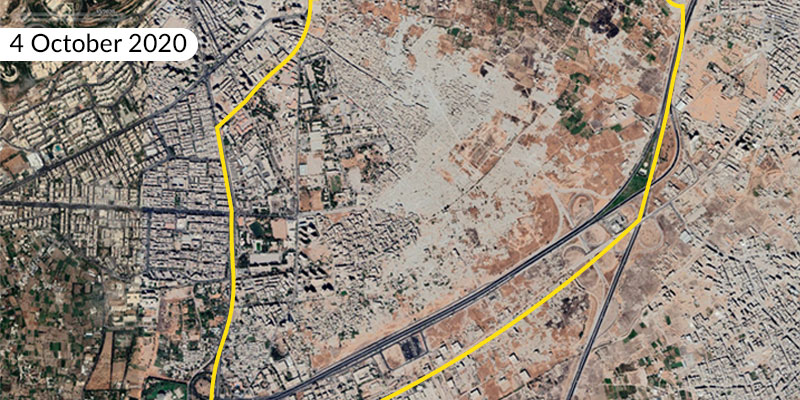 Two satellite images showing the extent of destruction in Qaboun, in Damascus, taken between 4 February 2012 and 4 October 2020.

The Damascus government has exploited the authority granted in Decree No. 5 of 1982, amended by Law 41 of 2002[1], of defining the area that needs reconstruction or expansion based on the increase in population or the scale of destruction due to the conflict, as well as the authority to prepare urban plans according to the proposed area.

The Syrian government took advantage of the lack of a well-defined binding time limit to produce the urban plans. Accordingly, the law provides authorities in charge wide discretionary power for choosing the right time to start planning, regardless of the interests of property owners, especially if and when property owners are displaced. 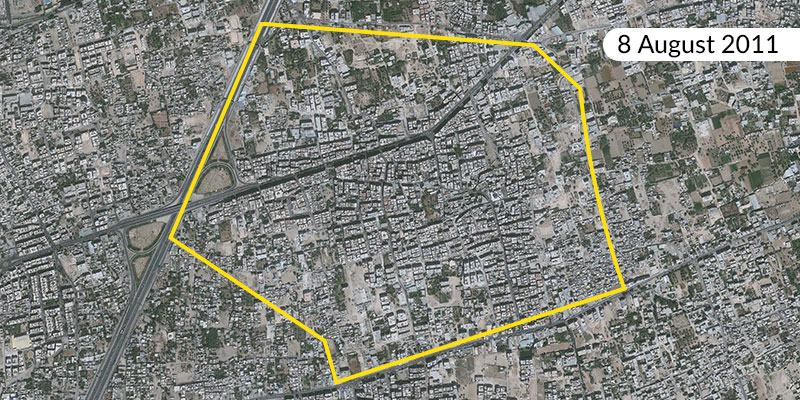 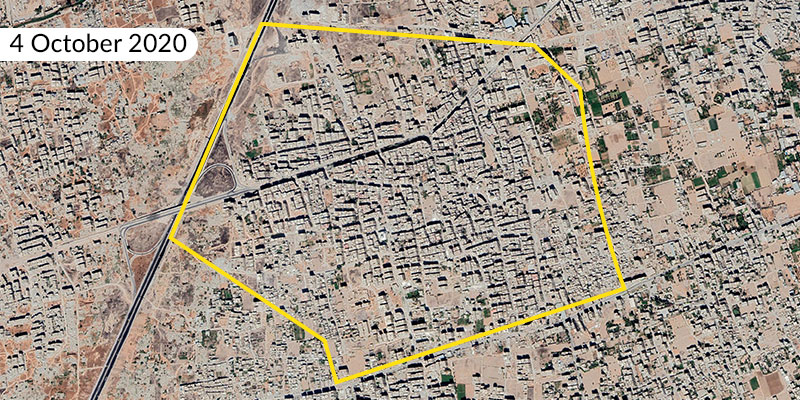 Two satellite images showing the extent of destruction in Zamalka, taken between 8 August 2012 and 4 October 2020

The Syrian government is creating a state of ambiguity in planning the areas to be seized, taking advantage of the dual legislation of real estate, by applying different laws and legislative decrees to various areas in order to control them, including Decree No. 66 of 2012, Law No. 10 of 2018 and Decree No. 5 of 1982.

STJ believes that the use of different urban planning laws across the various areas is likely to prevent negative public opinion against the new urban planning schemes and laws, especially after the reaction against Law No. 10 of 2018. However, while two different laws may be at work, they both result in the same consequences for property owners.

Moreover, one of the issues with Decree No. 5 is the procedure through which property owners are notified of new urban plans. Article 5(B) of the law stipulates that the notification shall be either in person or via publication of the new urban place decision in two local newspapers (e.g., al-Baath or Thawra Newspaper), across national radio, or TV channels.

Practically, most of the residents of Jobar and the areas included in the new urban plan No. 106 are currently internally or externally displaced. Their displacement from their homes makes it very difficult for them to learn about the new urban planning announcements. Moreover, if they do learn about the new plans, it may be impossible for them to prove their ownership, or even object to the new places, because they live outside of regime-controlled areas.

Furthermore, if residents do want to make an objection to the new decisions, Decree No. 5 provides only a small window through which to file complaints (30 days after the initial announcement). Therefore, residents do not have enough time to prove their ownership.

In addition, many of the property owners may be liable for persecution by Syrian intelligence forces for their political positions, which will prevent them from being present to contest decisions before the committee referred to in Decree No. 5, Article 5.

Suppose for the sake of argument, that the owner gets the security clearance for a power of attorney, the routine procedures will take time for getting the power of attorney; certainly, longer than the 30-day contesting notice period, making the entire process of contesting useless.

Urban planning of areas according to Decree No. 5 of 1982 will lead to seizing part of or the entire properties of some owners in Jobar, as the new plan will lead to the expansion of roads, the creation of new ones, as well as building parks, schools, and other public facilities that all will affect the ownership rights of citizens. Therefore, legally speaking, the Syrian government is supposed to allow affected people to use the court to guarantee their rights. However, the relevant law removes this judicial authority and refers it to a technical committee presided by the governor and membered by a number of his/her staff to consider contests, if any. Accordingly, the opponent becomes the judge in the contesting process. 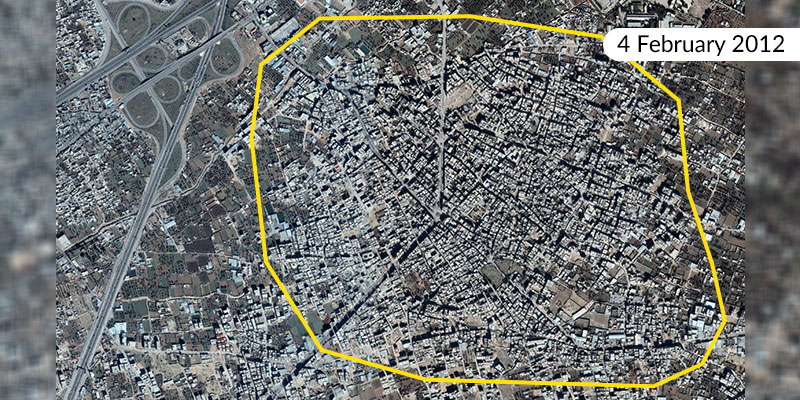 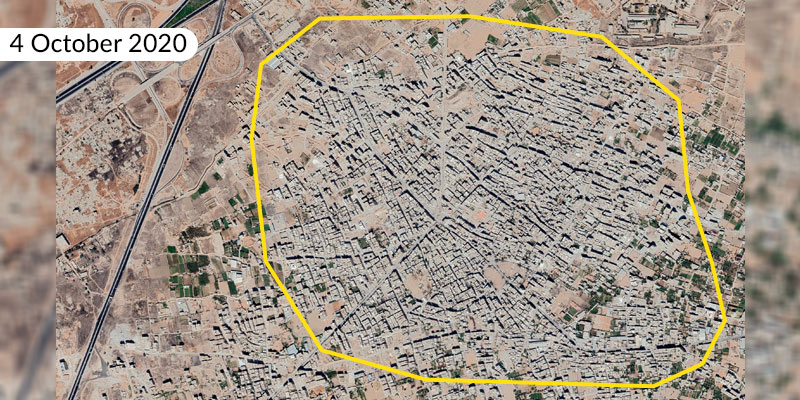 Two satellite images showing the extent of destruction in Irbin, taken between 4 February 2012 and 4 October 2020.

The social re-engineering practiced by the Syrian government by seizing in part, or entire, properties from owners without any compensation contradicts the stipulations of Article 15 of the Syrian Constitution currently in force (2012 Constitution), which safeguards private ownership, individual or collective. Under the current Syrian constitution, properties can only be removed for the public interest and if the property owner is provided with compensation equal to the real value of the property.

Moreover, the seizure also contradicts the stipulations of Article 771 of the Syrian Civil Code, issued by the Legislative Decree No. 84 of 1948, confirming that no one can be deprived of their property unless when prescribed by the law and with fair compensation.

Above all, seizing properties of some citizens in Jobar and other areas involved in the new urban planning (to modify the urban character), without following the proper legal procedures, or allowing citizens access to adequate contest procedures against the decisions of the administrative unit, and without any tangible and fair compensation, forms a clear contravention to many international charters and conventions such as the Universal Declaration of Human Rights of 1948, which stipulates that everyone has the right to use and enjoy their own property, and prohibits arbitrary deprivation of anyone from their properties. Moreover, the European Convention on Human Rights of 1950 states that everyone has the right to respect for their private and family life, as well as their home. Also, the Arab Charter on Human Rights of 2004, confirms that everyone has a guaranteed right to own property, and shall not under any circumstances be arbitrarily or unlawfully divested of all or any part of their property. 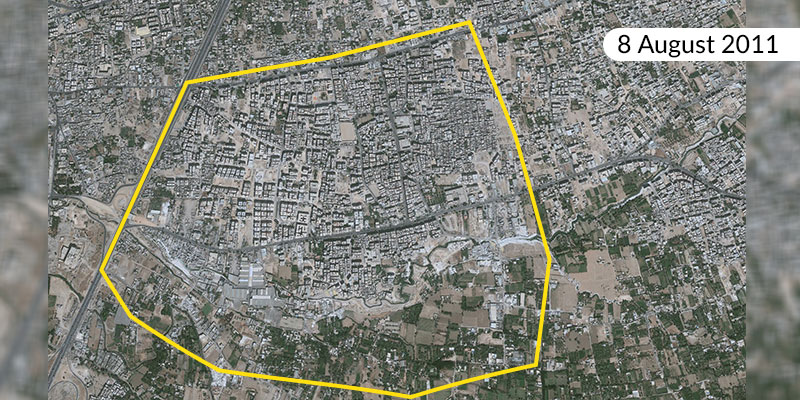 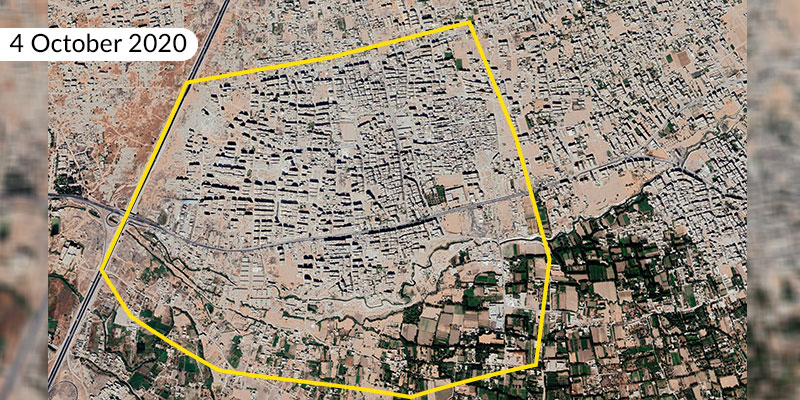