Property and landowners have a limited window to prove their ownership over properties, threatening many who lack access to title deeds or are displaced with the confiscation of their properties and livelihoods

November 1, 2021 429 views Download as PDF This post is also available in: Arabic Font Size A A A 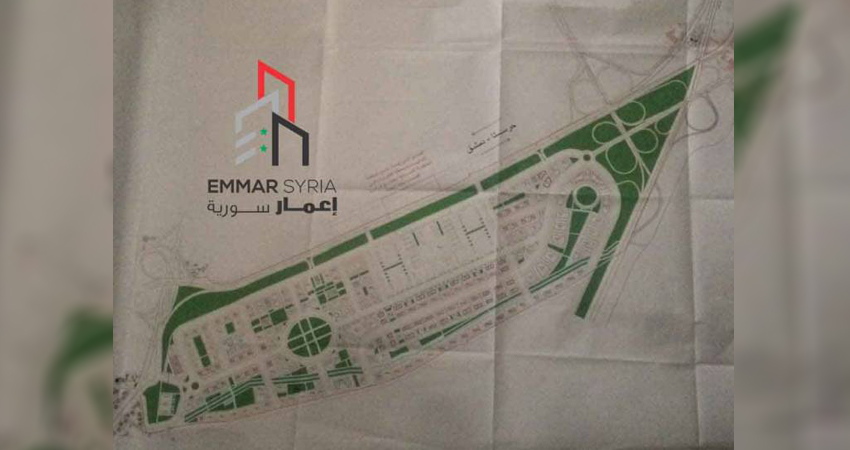 The organizational chart of Industrial Qaboun and part of the lands of Harasta. Credit: Emmar Syria.

On 14 September 2021, the Syrian President Bashar al-Assad issued Decree No. 237 which created new “zoning” restrictions in the areas at the northern entrance of Damascus, including Qaboun and Harasta. The decree is based on Planning Scheme No. 104, ratified by the Damascus Provincial Council (DPC), and the plan’s approved feasibility study, which estimates the revenues the government is likely to obtain from implementing the scheme.

The DPC’s Planning Scheme No. 104, issued in June 2019, covered approximately 200 hectares (2 million m2) of Qaboun and Harasta. Following the plan, government entities will carry out demolitions and zoning work in the target area, over 70% of which fall within Qaboun neighborhood alone. In the zoned area, the government will likely implement a project that consists of several residential, commercial, and service towers, in addition to investment facilities, hospitals, schools and a number of service centers for the city.

Faisal Sorour, a member of the DPC’s Executive Office in Damascus, introduced the project to the media through the pro-government al-Watan newspaper, claiming that the new planning scheme seeks to highlight Damascus’ identity as a city for services, finance, and investment— not as a city for industrial or agricultural enterprises. Within this vision, all industrial workshops and factories, both medium and small, are likely to be removed from Qaboun and Harasta, ignoring the fact that these facilities are the source of income of the people that operate and own them.

In Syria, two zoning methods are applied to areas within the general planning scheme. These methods are governed by two distinct laws—Law No. 23 of 2015 and the Exceptional Planning and Urbanization Law No. 10 of 2018 (known as Law No. 10), in addition to its associated decrees. On the one hand, the relatively recent Law No. 23 allows administrative units, including the provincial/municipal council, to deduct a segment of the zoned area to establish “public structures”, such as parks, mosques, churches, and hospitals. On the other, Law No. 10, allows the expropriation of a property from its owners and the liquidation of its ownership into “shares”. In other words, Law No. 10 converts immovable property into common stocks.

Decree No. 237 falls within the scope of the laws of urban development of human settlements, in which decrees and laws are enforced to govern the activities of city zoning and urbanization.

These decrees facilitate the zoning and [re]zoning of any urban area—Qaboun and Harasta in the case of Decree No. 237—located within the general planning scheme, regardless of whether the target area needs reconstruction or not or is a site for informal settlements and illegally built structures or not. Simply put, these decrees authorize the provincial councils to zone any geographical area they wish without limitations. Consequently, the councils are granted an open license to demolish any neighborhood or area that the Syrian government does not want to exist.

Notably, these decrees, including Decree No. 237, function at odds with the purposes of the June 2019’s general planning scheme, designed to draw the future vision of existing human settlements and their expansion by defining urban boundaries, the road network, and the uses of the lands within the scheme.

President al-Assad issued the decree based on a proposal from the Minister of Local Administration, Hussein Makhlouf, which the minister hinged on a feasibility study. Importantly, the decree does not openly define which law applies to it. However, hints to the frame law can be detected in the decree’s text and promulgation procedures entail the frame law. In its body, the decree cites the “approved economic feasibility study”. As for its promulgation legal steps, the decree’s procedures bear significant similarity to those the government followed upon issuing Law No. 10 of 2018. These two factors indicate that Law No. 10 is likely the decree’s legal framework. However, Syrian authorities apparently avoided citing Law No.10 of 2018 in the body of Decree No. 237 to avoid stirring up local and international opinion against the decree.

In principle, decrees like Decree No.237 authorize administrative entities for the areas to be zoned, usually a provincial council, city, or municipality — and particularly the DPC in the case of Decree No. 237— to carry out the following measures:

Decree No. 237 poses major time-related challenges to property owners and raises serious concerns over the fate of the properties lying within its geographical scope. On the one hand, the decree was enforced at a sensitive juncture in the conflict, amidst heated talks about reconstruction and refugees’ return home. On the other, the 30-day period authorities gave people to establish their rights over properties is short, especially since the decree targets areas that are former combat hotspots from where residents fled or areas where people owned properties outside the real estate registry lock — property obtained through court orders, judicial powers of attorney, or informal documents. Consequently, many owners are at risk of losing significant ownership rights over their properties in target areas.

Additionally, the decree creates legal, bureaucratic, and administrative burdens for property rights holders in Qaboun and Harasta by virtue of their current places of residence. Many of these owners are refugees dispersed across several countries of asylum or internally displaced (IDPs) in other areas within Syria. Proving ownership is difficult for all IDP groups, but it is especially challenging to IDPs residing in areas outside the control of the central government.

A third challenge that endangers property rights is many Syrian local real estate records were destroyed or intentionally damaged during the conflict, in addition to many people being denied access to surviving records. Even prior to the conflict, only half of lands and properties were officially registered. The inaccessibility of official records is alarming on two levels. First, owners might fail to submit property declarations on time within the short notice authorities specify; second, IDP or refugee owners might lose the choice of submitting decelerations through proxies because they lack the necessary documents to submit or even authorize legal agents by granting relatives or other people powers of attorney.

In addition to missing records and timing issues, the label changes the decree imposed on the target areas also introduce massive challenges. In the Qaboun neighborhood, owners of small and medium factories will not be able to reoperate their facilities because the neighborhood, as per the planning scheme, is a financial and investment zone, not industrial or agricultural zone. Under these label shifts, the industrialists would lose their sources of income and property entitlements, retaining only ownership of the land where the factory existed if they are able to prove their ownership.

Even though the factories and workshops in the industrial zones in Qaboun and parts of Harasta were dedicated to small and medium-sized businesses, such as cloth and mineral oils production workshops, or food processing plants, these enterprises offered job opportunities to many Syrians. Consequently, the closure of factories in the industrial zone of Qaboun does not only jeopardize the ownership rights and sources of income for industrialist owners but will create massive waves of unemployment affecting the lives of tens of thousands of families at the expense of the revenues decree beneficiaries will make from planned projects.

A History of Legal Misuse

Importantly, the Decree No. 237 is not a unique case of alarming misuse of legal frames by Syrian government-affiliated entities. In 2012, the DPC exploited their mandate under Legislative Decree No. 66 of 2012—deemed as the father of Decree 237 and Law 10 before it—which was applied to the Marota City zoning area, including the former al-Razi and Kafarsuseh areas.  Under Decree No. 66, the DPC unjustly confiscated large areas of the property, almost 50 plots, from male and female Syrian owners without compensation. The confiscated areas were designated as expansion sites for the premises of the Presidency of the Council of Ministers, the People’s Assembly, and its affiliated departments. Later, the governor of Damascus transferred the ownership of the confiscated plots to the government’s Cham Holding Company. These plots were confiscated even though they were not covered by the scope of Decree 66 of 2012. Drawing on this experience, the DPC is likely to apply the same confiscation mechanism to targeted areas in Harasta and Qaboun and annex them to government owned-facilities on the pretext that government facilities are public buildings— threatening the private properties of many people who own real estate and land in the area.

On the heels of the decree, the minister of housing issued alternative housing instructions as compensation for the structures to be demolished during the zoning process. However, the instructions were clear about the beneficiaries of the promised alternatives, who must be occupants residing in target areas. This means that IDPs from Qaboun and Harasta who fled their war-destroyed areas would not be entitled to alternative housing because they are not current occupants of the area.