The Muslim Brotherhood of Syria and the Syrian Islamic Council (SIC), among others, made statements “welcoming and congratulating” Taliban for seizing Kabul

September 2, 2021 443 views Download as PDF This post is also available in: Arabic Font Size A A A

A photo by Syrians for Truth and Justice showing a group of people, including many children, during one of the marches organized by Hay'at Tahrir al-Sham in Idlib Governorate, in order to celebrate what it called "the victory of the Taliban" in Afghanistan.

On 15 August 2021, the Taliban swept into the presidential palace of the Afghani capital Kabul, nearly 20 years after they were thwarted by a US-led international coalition. In Syria, the Taliban’s seizure of power garnered positive reactions from several Islamic blocs and military entities, notably Hayat Tahrir al-Sham (HTS) — the former Jabhat al-Nusra (al-Nusra Front) — which controls most of Idlib province with the support of other jihadist currents and forces.

In addition to HTS, key Syrian Islamic entities published statements praising and applauding the Taliban for their “victory, and for repelling the occupation.” Among these were the Muslim Brotherhood of Syria and the Syrian Islamic Council (SIC), which consists of 40 Sharia associations and committees and defines itself as: “a Syrian moderate Sharia referential authority.”

Field researchers with Syrians for Truth and Justice (STJ) reached out to several Idlib-based sources to cover reactions to the Taliban’s rapid conquest of Kabul. The local sources said that on 15 August 2021 numerous mosques across Idlib city played takbir— ʾAllāhu ʾakbar, meaning “Allah is the greatest”, an Arabic expression used in various religious contexts—, for half an hour between the Maghrib and the Isha prayer times to celebrate the “Taliban’s victory,” emulating Eid celebrations.  ,

Sources said that the takbir was initially voluntary, carried out by individual imams, leaders of the mosques, with no prior instruction by HTS, nor by the HTS-affiliated Syrian Salvation Government (SSG). The imams took turns playing takbir, and among them were the imams of the mosques of Sa’d in al-Thawara neighborhood, Shu’ayib in al-Dbait neighborhood, Abu Bakr in al-Shaik Tult neighborhood, and al-Rawda and al-Hussain in al-Jame’a neighborhood.

Over the next few days, other forms of celebrations were held on the city’s streets. HTS fighters distributed sweets and vehicles displaying the HTS flag and playing takbir or shouting slogans rejoicing the “Taliban’s victory” as they paraded throughout the city. 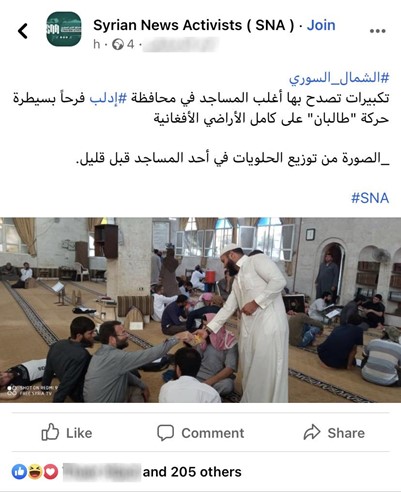 On 18 August, HTS posted a statement of congratulations, in which they “congratulated Taliban and the Afghani people” and described “Taliban’s entry into the capital as a conquest.”

In the statement, HTS also said that they “in the Syrian revolution, derive their steadfastness and constancy from such living experiences.” 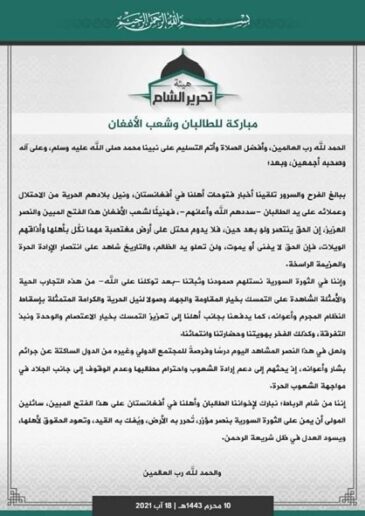 Image 4- Copy of the HTS statement of congratulation, praising Taliban for their control over Kabul. The statement was published on 18 August 2021.

The SSG—HTS’s civil façade—also participated in the celebrations in their official capacity. The SSG ordered imams in a large number of Idlib city’s mosques to dedicate the Khetbat al-Juma’a (The Friday sermon) to the Taliban’s victory. Additionally, several rallies filled the city’s streets after the Friday prayers celebrating the conquest.

Notably, a large segment of Idlib’s population renounced the celebrations and the directives of the HTS and the SSG. 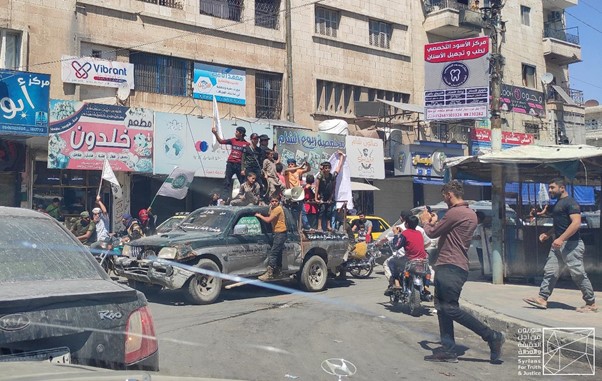 Image 5- A group of people, including children, from one of the HTS-held rallies in Idlib province, celebrating what the HTS described as “Taliban’s victory” in Afghanistan. Credit: STJ.

The responses to the Taliban’s entrance into Kabul were not limited to the HTS-induced festivities in Idlib. On 18 August, the SIC published a statement on their official website, congratulating the Afghani people on “expelling occupation and purifying their land of the filth of the colonizers . . .”

In the statement, the SIC demanded a “cleansing Syria from the filth of the Iranian and Russian occupations, as well as their operatives…”

The Muslim Brotherhood of Syria published a similar statement, echoing the tone of the SIC, on 20 August. The statement did not appear on the bloc’s official website, instead it was only posted on their Facebook account, and said that “Afghanistan claimed freedom and independence after over half a century … owing to the struggle of their mujahedeen.” 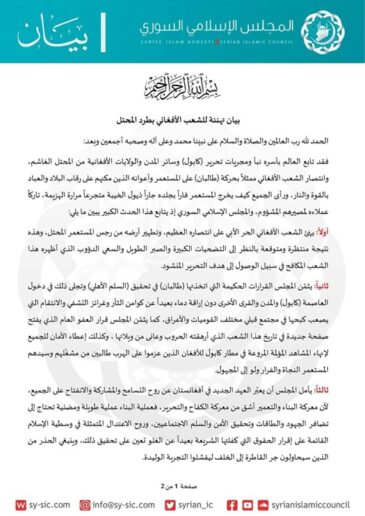 Image 6- The first page of the SIC’s statement, celebrating Taliban’s rule over Afghanistan. 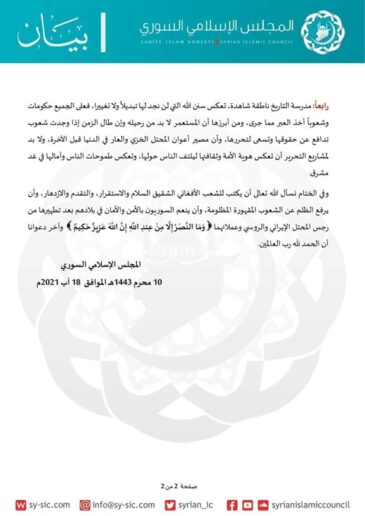 Image 7- The second page of the SIC’s statement, celebrating Taliban’s rule over Afghanistan. 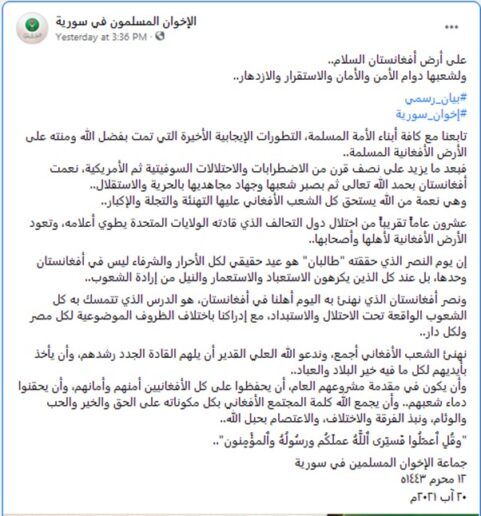 Image 8- The statement published by the Muslim Brotherhood of Syria on 20 August 2021, celebrating Taliban’s control of Afghanistan.