Syria: An Investigation on the Attack on Afrin’s Al-Shifaa Hospital

In an investigation into the perpetrator of 12 June and 25 July attacks on al-Shifaa hospital, an analysis of the armaments used in the attack constitute evidence that Russian and Syrian government forces were responsible

The Attack Against Al-Shifaa Hospital

On 12 June 2021, at approximately 7:00 PM Syria local time, several artillery rockets struck  al-Shifaa Hospital[1] in the city of Afrin, controlled by Turkey and allied Syrian opposition armed groups of the Syrian National Army (SNA). The attack resulted in 15 deaths and 40 injuries, including staff, as well as devastating damage to the hospital and surrounding buildings. In the days following the attack, Turkish authorities and allied SNA groups prevented journalists from entering the hospital to cover the attack, and conflicting reports emerged alleging who was responsible for the crime.

The attack on al-Shifaa Hospital was part of an offensive against Afrin. Other attacks targeted civilian sites in the city on the same day at approximately 6:00 P.M., killing at least one person and wounding others. Tragically, many of the civilians injured in attacks earlier in the day sought treatment at al-Shifaa hospital before being killed in the strikes on the hospital itself.[2]

The Syrian American Medical Society (SAMS) reported the attack against al-Shifaa Hospital on its Facebook page and posted photos of the resulting damage.[3] SAMS claimed that the strike was a ground attack and testified that two members of its medical staff were killed. On the same day, SAMS released a press statement condemning the attack and providing additional details on the attack.[4]

Subsequently, the White Helmets, officially known as Syria Civil Defense, published a field report on the attack against the al-Shifaa Hospital. The report cited a provisional count of causalities: 15 deaths, including four women, a child, seven men, and three unidentified people. The report also stated that the rockets were fired from areas jointly controlled by the regime and the Syrian Democratic Forces (SDF).[5]

Immediately after the attack, military and political authorities in the area made differing claims on who was responsible for the strikes. The Turkish president Recep Tayyip Erdogan accused the Kurdistan Workers’ Party (PKK) of being responsible while Turkey’s Ministry of Foreign Affairs and Turkish national mass media accused the People’s Defense Units (YPG) of conducting the attack with BM-21 Grad rockets and artillery shells.[6] However, the SDF refuted the accusations through the director of its media centre, Farhaad Shami, who denied the SDF’s presence in Syria’s northwest.[7]

Mazloum Abdi, the SDF’s commander-in-chief, echoed Shami’s refutation in a post on his Twitter account.[8] Furthermore, a Facebook page, using Abdi’s name, accused Russian forces of carrying out the attack against al-Shifaa hospital. Importantly, this Facebook page does not belong to Mazloum Abdi and is a fake account, even though it has been cited in numerous articles on the incident.

Since the attack on al-Shifaa Hospital and as of the completion of this report (the last week of August 2021), the Turkish Army and its allied Syrian rebels (present in Afrin and Euphrates Shield area) and the Syrian Army, allied militias, and the YPG (present mainly in the Shahbaa region and rural Aleppo)  have continued to exchange fire.

The al-Shifaa Hospital is located on the western edge of Afrin city, among civil and military buildings of the Turkish government and the SNA. According to STJ’s field researchers and other credible sources, al-Shifaa Hospital is surrounded by the Afrin Security Directorate/Criminal Security Investigation, the Political Security Building, the governor’s guesthouse of the Hatay Wali, the Turkish Intelligence/the Public Security Directorate (in Turkish: Kent Güvenlik Yönetim Sistemi Binası), a Turkish security base (formerly Azhar Afrin School), and the Palace of Justice of Afrin/Civil Court.[9] It should be noted that the hospital’s back door is connected to the building of the Afrin Security Directorate/Criminal Security Investigation. 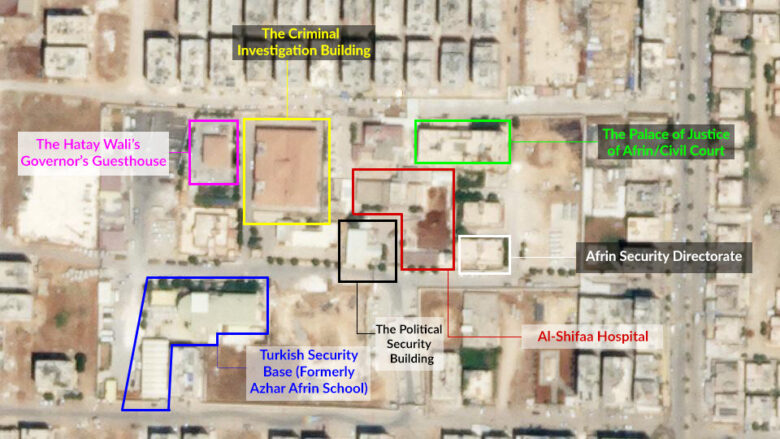 STJ investigated the attacks targeting al-Shifaa Hospital between 12 June 2021 and the last week of August the same year. Relying on visual evidence and testimonies from witnesses, survivors, and medical staff, the investigation analyzed the conflicting accounts of events and played out multiple eventualities to identify the perpetrator.

Due to the limited amount of evidence available, STJ cannot definitively identify the perpetrator responsible for the al-Shifaa Hospital attack on 12 June 2021. However, after thoroughly investigating evidence of the case, STJ’s team of researchers concluded that the Syrian regime and, indirectly, Russia are the most likely culprits of the hospital attack, which killed 15 and injured dozens more — many of them civilians and medical workers.

[2] The “double tap” is a bombardment tactic in which a location is struck twice; the second time occurring after first responders have arrived at the scene of the strike and that results in the largest number of dead and injured. Syrian and Russian forces are the main parties who have utilized this tactic throughout the ongoing Syrian war.

[8] The full tweet: “The SDF categorically denies that any of its forces were responsible for/or involved in, the tragic attack in hospital in Afrin. We are deeply saddened by the loss of innocent life. We condemn the attack without reservation. Targeting hospitals is a violation of international law.”

[9] Some facilities and buildings have both official and street names.