Statement regarding the Peace Spring Operation by Turkey in Northeast Syria 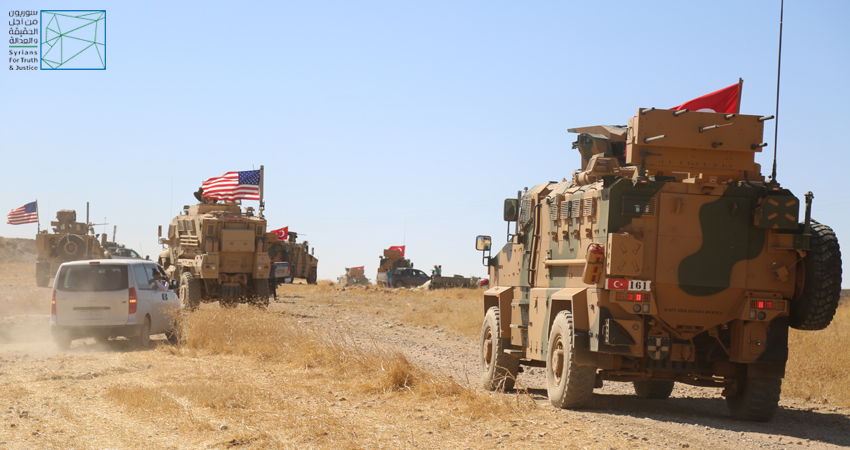 Turkish and US military armored vehicles during their first joint patrol east of the town of Tell Abiad, in compliance with the provisions of the "security mechanism", which was agreed upon in response to Turkish security concerns. Sep. 8, 2019. Photo credit: Syrians for Truth and Justice-STJ

On 9th October 2019, the government of Turkey informed the United Nations Security Council of the launching of the Peace Spring Operation, on the basis of Article 51 of the UN Charter.[1] Ever since, air strikes and artillery have displaced[2] nearly 200.000 including 70.000 children[3], and killed more than 200 civilians.[4]

The launching of the operation itself is illegal. Absent any armed attack, and in the context of the implementation of a US-guaranteed security mechanism, Article 51 of the UN Charter and its right to self-defence, invoked by Turkey to start the operation, is inapplicable and could not be used to justify it. A breach of Article 51 by Turkey opens legal avenue for state responsibility and could lead to prosecutions against President Erdogan for the crime of aggression at the initiative of the UN Security Council.

Further, the conduction of the military operation is itself characterized by blatant violations of International Humanitarian Law. The war crimes committed by the Turkish army and its affiliated opposition armed groups have been documented by OHCHR and Amnesty International and include “summary executions carried out by fighters belonging to the Ahrar al-Sharqiya armed group, which is affiliated with Turkey, on 12 October”, “indiscriminate attacks in residential areas, including attacks on a home, a bakery and a school, carried out by Turkey and allied Syrian armed groups,” and the “summary killing in cold blood of a prominent Syrian-Kurdish female politician, Hevrin Khalaf, by members of Ahrar Al-Sharqiya.”[5] These violations exceed the violations committed by Turkey and its affiliated opposition armed groups during the occupation of Afrin as part of the Olive Branch operation, that had led, in 2018, to the forced displacement of 137.000 civilians, arbitrary arrests, property confiscation and looting of homes and businesses.[6]

All actors to the conflict and the ongoing negotiations have the responsibility to protect civilians and ensure human rights become the priority.

New Evidence Supporting the National Army’s Accusations in the Murder of the Kurdish Politician Hevrin Khalaf - Syrians for Truth and Justice December 10, 2019 - 2:15 am