Paris: Joint Event on the Violations and Demographic Change in Northern Syria

In cooperation with the Kurdish institute of Paris, Syrians for Truth and Justice and the European and American solidarity committee for Afrin conducted a seminar addressing the impact of SNA and Turkish violations on local communities in the occupied territories 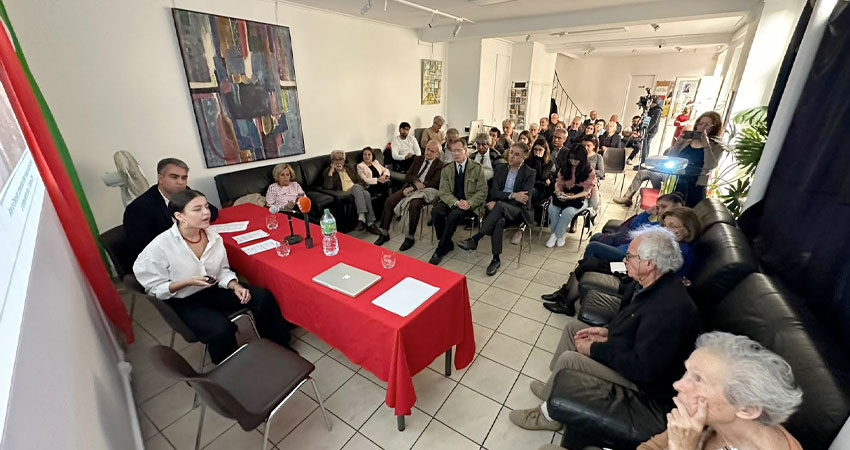 Part of joint event held in Paris on violations and demographic change in northern Syria.

On 08 October 2022, Syrians for Truth and Justice (STJ) and the European and American solidarity committee (EASC) for Afrin held a seminar on the situation in Syrian territories under Turkish occupation. Representatives of Syrian civil society and organizations illustrated the patterns of violations, including housing, land and property violations against local communities in Northern Syria.

The involvement of Turkey in Northern Syria through the opposition Syrian National Army (SNA) factions raises concerns as victims and experts have been able to highlight systematic practices of looting, property seizing and intimidation. These violations are targeting ethnic and religious communities in the region, especially Kurdish and Yazidi communities.

Testimonies and findings by STJ and representatives of the EASC for Afrin provided evidence of ongoing patterns of violations in the Peace Spring Strip and in Afrin, such as enforced disappearances, arbitrary arrest, mistreatment and property seizing and looting. One key outcome was addressed: the demographic change.

Panelists provided multiple examples of how the local communities were displaced and are unable to return, being forced to sign ownership assignment documents under threat of detention and torture. These violations are threatening the population including women and girls who are often subjected to sexual and gender based violations such as sexual assault and forced marriage to members of military factions.

The Turkish President Erdogan announced his plan to repatriate at least one million Syrian refugees to the north, many of whom are originally from other Syrian regions, and although the country is not safe for return, creating a de facto demographic change, with Kurdish local displaced from their communities as part of a larger discriminatory project. Moreover, in June 2022, Erdogan made a statement for a possible new invasion 30km deep in Manbij and Tell Rifaat region which corroborates a larger policy in the region.

The conversation demonstrates the multifaceted impact of the systemic violations on local communities -including denying access to food and water and disruption of the environment and resources- and on Syria’s future stability and sustainable peace. Communities facing those violations are already vulnerable after more than a decade of war and impunity for the perpetrators of those crimes.

By providing this documentation, Syrian civil society organizations and victims aim to bring awareness to the thesis of blatant human rights violations, and eventually accountability towards those crimes.