Using civilians as human shields was documented during the clashes that took place between the Levant Front/al-Jabha al-Shamiya and the 32nd Division, Ahrar al-Sham Sector in Northwest Syria - June 2022 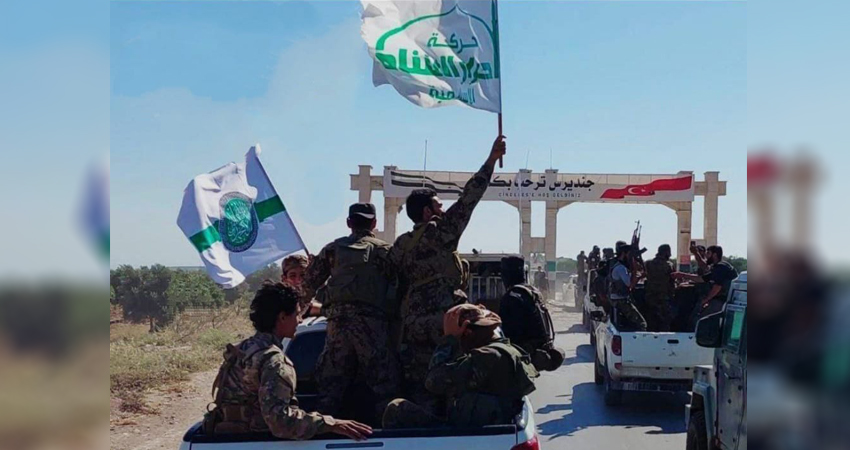 Fighters from Hay'at Tahrir al-Sham (HTS) and Islamic Movement of the Free Men of the Levant/Harakat Ahrar al-Sham al-Islamiyya at the entrance to Jindires district in Afrin region (Olive Branch). Credit: LindseySnell

Recent clashes between the Levant Front/al-Jabha al-Shamiya and the 32nd Division – Ahrar al-Sham sector has allowed Hayat Tahrir al-Sham (HTS), which controls the remaining areas in Idlib Governorate, to secure a permanent presence in the region of Afrin. The latter was controlled by the Turkish Army and factions of the opposition’s Syrian National Army (SNA) during Operation Olive Branch in 2018.

On 18 June 2022, violent clashes erupted between the Levant Front/al-Jabha al-Shamiya, led by Muhannad al-Khalaf (Abu Ahmed Nour) and the Army of Islam/Jaysh al-Islam, led by ‘Issam Buaidani, on the one hand, and the 32nd Division (Ahrar al-Sham the eastern sector),[1] led by ‘Mohammed Rami (Abu Haidara), on the other hand. Clashes continued for a day and a half in several towns and villages controlled by the factions in the Northern countryside of Aleppo. They resulted in casualties among civilians, in addition to several deaths and injuries on both sides of the conflict.

This clash was an extension of previous battles and disputes between the two parties. Heavy and medium weapons were used in populated areas and near IDP camps.

Notably, the Military Police and SNA factions refrained from intervening, disengaging, or protecting the population, which led to material damage and casualties among civilians, particularly in the vicinity of al-Bab city.

The 32nd Division requested support from the HTS. Accordingly, the latter sent huge military convoys, holding the banner of Ahrar al-Sham, from Idlib Governorate to Afrin region. Convoys were able to reach several villages in Afrin, due to the support of controlling factions and Military Police which cleared the checkpoints and opened the way. Nevertheless, the SNA factions did not act, ignoring orders of the Ministry of Defense to confront HTS, secure the supply routes, and protect the area of Olive Branch.

The military convoys withdrew after appointing several groups of fighters in various villages of Afrin, in order to support the 32nd Division. This was the first time for an organization classified in the Global Terrorism Index to reach Afrin and settle there permanently. This took place after an agreement with the Levant Front/al-Jabha al-Shamiya to withdraw from the Division’s headquarters and stop the fight.

Previously, STJ published an extensive report on the impact of the clashes between factions on civilians living in areas under Turkish control, as well as how the internal battles contribute to enhancing the danger and insecurity in areas that Turkey claims to be “safe”.

Because of these clashes, all roads leading to the city were closed, and many civilians were injured, especially those residing in camps close to villages, such as al-Rawabi camp near Susyan. Moreover, four were injured—including a pregnant woman— by bullets near the Qatari Housing camp and al-Hadath. In the afternoon, the clashes reached Jarabulus city and a military camp of the 32nd Division in Tall Battal and al-Kornful village. Meanwhile, 10 were killed, and more than 23 were injured, in addition to the capture of several members of both parties.

On the same day, a number of civilians demonstrated in Qabasin town and in al-Bab city, demanding the Turkish guarantor to intervene and stop the fight. However, both factions escalated the clash until late at night. The battle resulted in the Levant Front/al-Jabha al-Shamiya taking control of the entire headquarters of the 32nd Division in the Eastern countryside of Aleppo.

[1] Since the establishment of the “Harakat Ahrar al-Sham al-Islamiyya”, the “32nd Division” has been one of its battalions. Later, the Division led by ‘Mohammed Rami Abu Haidara’ moved to the Northern countryside of Aleppo. On 27 November 2017, it merged with the “Levant Front/al-Jabha al-Shamiya”, led by ‘Abu Yassin’. Subsequently, a new leadership took the control of the “Levant Front/al-Jabha al-Shamiya”. Relations between the two parties were strained after the attack of the “Levant Front/al-Jabha al-Shamiya” on the Division’s headquarters on 1 April 2022. On the same day, the “32nd Division” announced its defection and went back to work with the “Ahrar al-Sham”, using the name: “the 32nd Division Ahrar al-Sham – Eastern Sector”. On 23 May 2022, the Division joined the “Revolutionaries for Liberation”. The Division consists of around 600 fighters, and is based in the village of Aulan in the Eastern countryside of Aleppo.