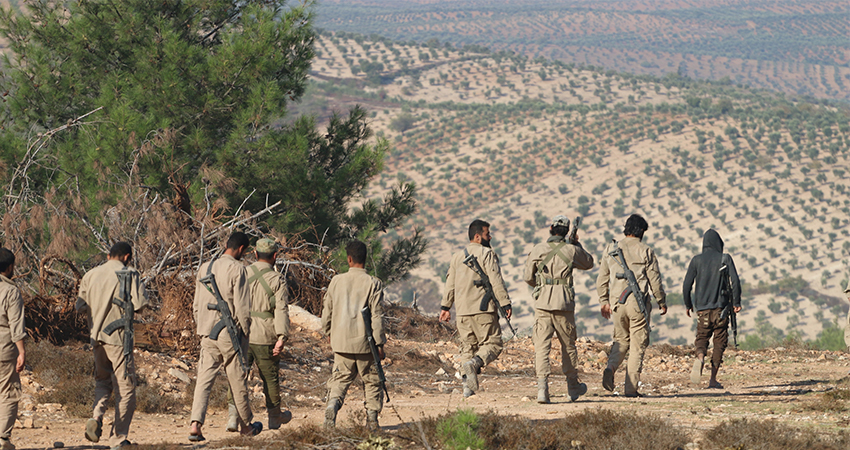 Opposition-Syrian National Army soldiers, backed by Turkey, walking in the countryside of Afrin.

Every five years, the United Nations reviews the human rights situation its 193 member states through a process called The Universal Periodic Review (UPR).  This year, The Advocates for Human Rights and Syrians for Truth and Justice submitted a report of human rights violations in Syria’s northern Kurdish-majority and/or minority regions of Afrin, Tal Abyad, and Ras al-Ain/Serê Kaniyê for the consideration of the United Nations Human Rights Council’s UPR of the Syrian Arab Republic in January 2022.

This report is a part of a larger project and submission by multiple Syrian human rights organizations about the human rights violations committed across Syria by the Syrian government and its allies. This report will be published and publicized along with the longer report in the coming months.

Since Turkey began supporting the opposition Syrian National Army (SNA) and launched Operations Peace Spring and Olive Branch to occupy northern Syria, the local population has experienced substantial human rights abuses, including forced long-term displacement, looting and illegal property seizure, harassment, forced disappearances and arbitrary arrests, violent attacks, lack of access to drinking water, illegal transfer and detention to Turkey, and exploitation as foreign mercenaries abroad. As these violations have occurred, the Syrian government has not met its burden under international law to stop these atrocities.

In our joint UPR report, The Advocates for Human Rights and Syrians for Truth and Justice provide extensive evidence of human rights violations occurring in the northern Syrian regions of Afrin, Tal Abyad, and Ras al-Ain/Serê Kaniyê. Additionally, we reflect on Syria’s 2016 UPR Review and outline where the Syrian government did not meet its obligations, including ensuring access to safe drinking water, stopping forced disappearances, and protecting civilians living under Turkish occupation.

By presenting evidence of human rights violations occurring in Syria, we hope that the United Nations Human Rights council will advise Syria to take immediate and effective steps to improve human rights conditions for people in northern Syria. These recommendations include that Syria: