The UN Security Council must hold an emergency meeting regarding the recent Turkish attacks, exert pressure to stop them, and protect civilians and infrastructure, giving effect to the provisions of international law

November 26, 2022 458 views Download as PDF This post is also available in: Arabic, Turkish Font Size A A A 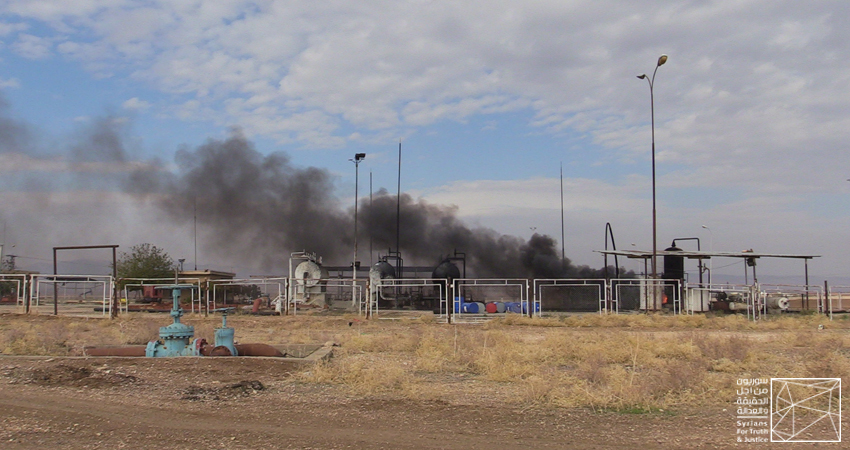 Fires in the Saida oil field due to airstrikes that targeted energy resources and civilian objects in Northeastern Syria during Turkey-led Operation Claw-Sword. Taken on 24 November 2022. Credit: STJ

Turkey intensified military activities in the northeastern parts and several areas in the western parts of Syria over the second half of 2022. However, the escalation climaxed on 20 November 2022, when the Turkish army launched the operation code-named “claw-sword.” With the new incursion, Turkey purportedly is responding to the terrorist attack on Taksim Street even though the Syrian Democratic Forces (SDF) denied involvement in the bombing.

Over the first two days of the operation, Turkish aircraft and drones bombarded several civilian objects, including a hospital equipped to offer medical services to children and a former COVID-19 care facility in Kobanî/Ayn al-Arab, in Aleppo’s countryside. Additionally, the airstrikes targeted the silos in the suburbs of al-Dirbasiyah, in al-Hasakah, and a power station in the suburbs of al-Malikiyah/Derik. The attacks killed several civilians, among them a journalist, and injured others.

Following the initial attacks, the Turkish military widened the scope of their airstrikes. Turkish air forces targeted new areas in the rural parts of al-Hasakah and Deir ez-Zor and even hit the Hol Camp. With the expansion, aerial bombing also became more hostile.

Turkish aircraft hit several vital facilities, including power stations and oil and gas resources. The attacks rendered several of the targeted facilities inoperable, straining the infrastructure already dilapidated by the conflict, which has been ongoing since 2011. Consequently, the attacks denied the local communities in the affected areas and millions of residents across other Syrian territories access to energy.

In parallel with the Turkish incursion, several missiles also landed in A’zaz, controlled by the Syrian armed opposition groups, on 22 November 2022. The attack killed and injured civilians.

Notably, grave human rights violations and war crimes marked all of Turkey’s incursions into Syria since 2016. During and after the Turkey-led operations, the military repeatedly horrified and initiated attacks on the villages, towns, and cities across northern Syria. Hostilities destabilized these areas, which today are home to hundreds of thousands of internally displaced persons (IDPs) who fled their original places of residence in other parts of the country to the safety of its north.

The recent Turkish attacks renewed concerns over displacement. The hostilities have already forced several locals to escape their homes and threaten to displace thousands of others should they continue, and in case Turkey decides to start a ground incursion. Notably, prospective displacement waves threaten to over-stretch humanitarian response efforts that have already been exhausted by previous incursions. Considering this, the undersigned organizations condemn the military escalation in northeastern Syria and the Istanbul bombing and demand that Turkey end attacks on civilians and civilian objects immediately and demonstrate respect for international humanitarian law. Additionally, the undersigned organizations demand that:

Organizations and Associations Signing the Statement: