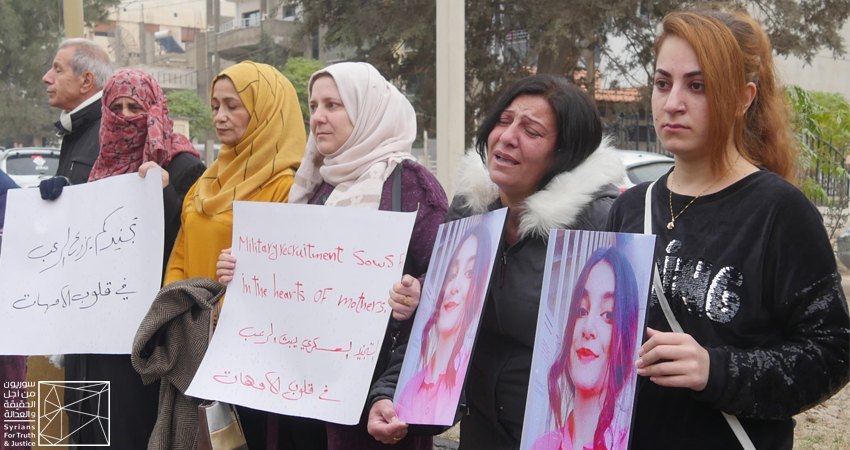 Families holding a protest in the northeastern Syrian city of Qamishli/Qamishlo on 28 November 2021, decrying the continued recruitment of their teenage children by the Revolutionary Youth (RY).

In this brief report, Syrians for Truth and Justice (STJ) documents the ongoing recruitment of male and female teenagers in northeastern Syria, which is under the military and administrative control of the Autonomous Administration and their affiliated Syrian Democratic Forces (SDF), which are backed by the Global Coalition against Daesh.

The report builds on information that STJ collected over October, November, and December 2021, pertaining to both recruitment cases and perpetrators. Field researchers with STJ recorded and verified the recruitment of at least 17 minors in northeastern Syria and the al-Shahbaa area in Aleppo’s northern countryside. The child recruits included nine boys and eight girls. Only one child was returned safely home, while the fate of the remaining 16 continues to be unknown.

As for the perpetrators, the field researchers reported that the Revolutionary Youth (RY) carried out all documented recruitments. Notably, the RY is licensed by the Autonomous Administration and is locally known as Taveras Ciwanên Şoreşger.  The RY was established in 2011 and despite the founders’ efforts to promote the group as an independent entity, it has been administratively affiliated with the Democratic Union Party (PYD).

The RY consists of young men and women who supposedly organize youth-aimed cultural, artistic, sport, and social events. However, in contradiction to their advertised activities, the RY has been associated with a wide range of violations, including the recruitment of child soldiers.

The latest registered recruitments did not go unnoticed and activated the local community. In response to the RY violations, the parents of the child recruits organized a protest, demanding that the RY demobilize their children and return them home.

To back the findings of this report, STJ will publish an additional report on child recruitments in the areas controlled by the Autonomous Administration, probing into enlistments carried out between January and December 2021.

STJ recommends the Autonomous Administration and the SDF:

Girls Ripped from Their Parents

On 17 December 2021, the RY recruited a teenage girl, F. J. Kashtan, 15, in Kouran village, in the countryside of Kobanî/Ayn al-Arab city. Investigating the incident, STJ reached out to the girl’s family. One of the girl’s relatives said that Kashtan’s parents referred to the concerned departments of the Autonomous Administration, but they failed to bring their daughter home. The relative narrated:

“When we referred to an RY-affiliated center in Kobanî city, the officers in charge told us that they had our daughter in their custody. However, they refused to demobilize her even though we presented them with documents confirming she is still a minor.”

STJ spoke to Antar’s mother, Sabah Antar, who said that her daughter was recruited and relocated from Amuda to Qamishli/Qamishlo city even though she is a minor. The mother recounted:

“My daughter was attending a course on computer skills with her friends at the RY center in Amuda city. She went there on 21 November 2021, but never returned home. Later, we learned that the RY enlisted and transferred her to Qamishli/Qamishlo city. We have been asking the Autonomous Administration to discharge her since then because the administration is not supposed to recruit girls.”

On 26 November 2021, A. Ibrahim’s family told STJ that their daughter returned home five days after one RY-affiliated center recruited her in Qamishli-Qamishlo city. While Ibrahim returned to the embrace of her family, the fate of the other three enlisted girls was still unknown when this report was composed in late 2021.

Because child recruitments are not new in northeastern Syria, STJ had previously filed a complaint to the Office for the Protection of Children in Armed Conflicts, covering 17 cases of male and female child enlistments. In the complaint, presented on 23 November 2021, STJ demanded that concerned authorities monitor the operation and activation of the office that was founded in August 2020. STJ also urged concerned authorities to impose harsh measures against entities and commanders that fail to abide by the ban on child recruitments, including the RY and the Young Women’s Union

Parents Demanded their Children Back

On 28 November 2021, several families protested in front of the UN headquarters in Qamishli/Qamishlo city. They denounced child enlistments carried out by military entities affiliated with the Autonomous Administration.

STJ reached out to several families who participated. The majority of those interviewed confirmed that the RY is the key perpetrator of child recruitments in the area.

STJ interviewed Taza Jambli, the mother of A.Abdulaziz, a 16-year-old recruited from a language teaching center in Qamishli/Qamishlo city. The mother narrated:

“They kidnapped my little girl on 2 November 2021, while she went to attend courses at the [Hansa Language Center] in Qamishli. We received a call from an unknown girl. She told us that our daughter was recruited and is in Qamishli city. Later, the girl told us that my daughter was transferred to the Karsour village in the city’s suburbs, where minor children are usually subjected to military training. The caller also confirmed that [the recruiters] took my daughter forcibly and against her will.”

The bereaved mother told STJ that her daughter needs constant healthcare because she has heart-related issues and calcium deficiency.

STJ interviewed a second parent, Abdulfatah Hassan. The father said that military bodies affiliated with the Autonomous Administration have been keeping his daughter R. Hassan, 13, for over seven months. Hassan said that the bodies continued to recruit his daughter even though he filed a complaint with the Office for the Protection of Children in Armed Conflicts.

From the site of the protest, Hassan said:

“My daughter and her friends were spending time at Jalbi village, west of al-Hasakah city. A military vehicle showed up and kidnapped her and her cousin. The other girl was returned to her family shortly after because she was sick. The girl told us that she remained with my daughter for a few days, during which they were subjected to military training with other girls in the Kabka Military Camp in the suburbs of al-Darbasiyah. The released girl added that they were then separated. We have not yet received any information about my daughter.”

The recruitments were not limited to girls. The family of a teenage boy, Kh. Obaid Hassan, 15, reported their child missing on 24 November 2021. The family lost connection with their child after he left home in the Hilaliya neighborhood in Qamishli/Qamishlo city.

Even though families took to the streets to express their distress and demand reunions with their children, the Autonomous Administration remained passive and took no measures to remedy the situation. Even worse, on 7 December 2021, the security forces of the Administration, particularly the Internal Security Forces (Asayish), blocked all the roads leading up to the main street in the al-Siyahi neighborhood in the northeastern Syrian city of Qamishli/Qamishlo. The Asayish imposed these restrictions on movement to prevent the parents of recruited children from carrying out another protest they planned to hold in front of the UN headquarters to renounce the ongoing child enlistments by military bodies affiliated with the Administration, especially the RY.

Unrelenting, the families relocated and held the protest in front of Farman Hospital in Qamishli/Qamishlo city. The families demanded the demobilization of minors under the age of 18. One of STJ’s field researchers attended the protest and reported that the Asayish used force to disperse the assembled parents.

“We demand an end to child recruitments and that the RY return the children they have already enlisted. This is why we are protesting. But, unfortunately, the Asayish forces have blocked all roads. For their part, the Women’s Asayish addressed us with abusive language instead of showing support for the mothers of the abducted minors.”

In addition to the restrictive measures they put in place to hamper the efforts of distressed parents, the Asayish also prevented journalists from reaching the protest and prohibited them from covering the demonstration. STJ’s field researcher reported that the Asayish barred journalists even though they had journalist cards and coverage permits issued by the media office of the Autonomous Administration.

In addition to banning on-site media coverage, an Asayish patrol raided the office of the Rudaw Media Network, which is located across from the UN headquarters in the al-Siyahi neighborhood in Qamishli/Qamishlo city. The patrol sealed the office and arrested six of the network’s staffers, Fahed Sabri, the director of the Qamishli office,  Wasfakan Ourkish, artist and anchor, Ahmad Ajamo, a director, Barzan Farman, a reporter, Nidal Rasoul, a photographer, and Hussein Osman, a coordinator. The detainees were released two hours later.

Following the arrests and subsequent release, Rudaw network published a news piece, in which Badi’ Hassou, director of the Asayish’s media office, claimed that the patrol arrested the Rudaw staff in response to information they later learned was “false”. The information alleged that there were people dealing with “hash” in the area of the network’s office. Hassou added that the raid of the network’s office, as well as the arrests, were the result of a misunderstanding.

In addition to local journalists, the Asayish arrested a correspondent with Al Arabiya and Al Hadath, Jumaa Akash, and a correspondent with Russia Today, Muhammad Hassan, as they tried to cover the protest held in front of the hospital. The Asayish also arrested four other persons who had nothing to do with the protest and were heading to their workplaces in al-Siyahi neighborhood. All six detainees were released on the same day.

Monitoring the local unrest over child recruitments, STJ documented an earlier protest organized by parents of enlisted teenage girls. On 27 November 2021, parents gathered in front of the headquarters of the Autonomous Administration’s Executive Council in Amuda city, demanding the demobilization of their daughters.

The recruitments reported herein are only a segment of child enlistments in the area, which remain widespread despite calls for putting an end to the practice and the treaties the Autonomous Administration signed with several international bodies to prevent the phenomenon. Keeping tabs on these enlistments, STJ published a report on 2 June 2021, revealing that 50 child soldiers were demobilized between May 2020 and late March 2021, while 19 others continued to be recruited by entities affiliated with the Administration.

Recruiters insisted on continuing child recruitments, ignoring the demands of the children’s parents. All families interviewed by STJ confirmed that they filed complaints to the Office for the Protection of Children in Armed Conflicts, hoping to get their children back. However, at the time of the interviews, none of the parents had been offered favorable answers.