NGOs call on the Human Rights Council to ensure the voluntary, safe, and dignified return of Syrian refugees 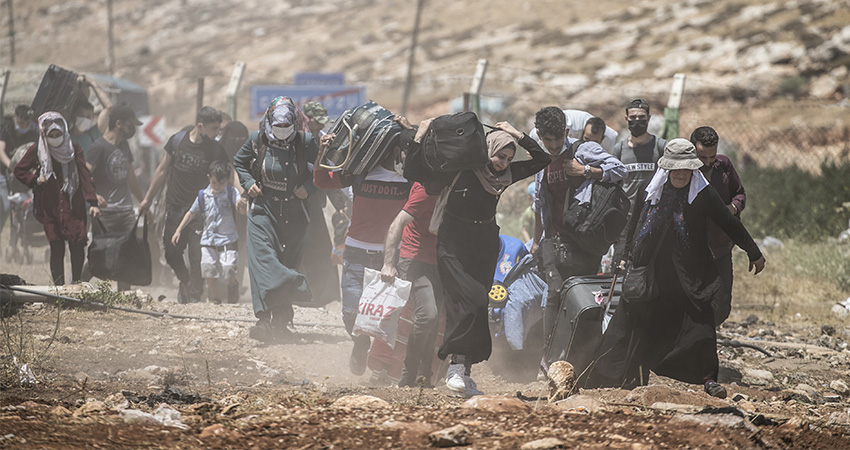 Eleven years have passed since the popular uprisings began in Syria while the Syrian refugee and displacement crisis remains the largest in the world. There are currently 6.8 million Syrians seeking refuge outside of Syria, while another 6.7 million are internally displaced. (1) As humanitarian needs worsen inside Syria, (2) civil society organizations have documented the increasing deportations and forced returns of Syrian refugees and asylum seekers to Syria by host countries.

These initiatives set a dangerous precedent for the forced return of refugees based on the inaccurate claim that parts of Syria are now safe for return, and those that have returned have faced arrest, torture and other ill-treatment, enforced disappearance as well as summary executions. (3) These deportations and forced returns are likely to have long-term consequences as thousands of Syrians, unable to return to their original homes, are settled in areas where local communities have been displaced, like in northeast Syria. These actions will demographically impact minorities, contribute to future instability, and challenge transitional justice initiatives.

Nearly half of Syria’s population has been displaced over the course of a nearly twelve-year conflict which has devastated the country’s economy and infrastructure.  Approximately 97 percent of Syrians live below the poverty line with over 14 million people in the country relying on foreign aid. (4) Drought conditions, which are expected to worsen, are likely to exacerbate need, threatening Syrians’ livelihoods, as well as their access to food, water, and power. (5) Moreover, Syria’s infrastructure has been catastrophically damaged as over 80 percent of infrastructure was destroyed in cities like Aleppo, and the suburbs of Damascus, which has left millions to seek shelter in under-equipped tent settlements established across the country. (6)

Moreover, airstrikes and military activities continue to threaten the civilian population in multiple Syrian provinces. Indiscriminate rocket attacks continue to kill civilians, (7) and terrorist attacks have displaced tens of thousands in recent months. (8) Arbitrary detention continues to be the most urgent challenge to human rights in Syria, with thousands of Syrians still disappeared and detained by the Syrian government (9) and armed opposition groups. (10) Even Syrians who have signed reconciliation agreements with the Syrian government remain threatened by arbitrary detention and assassination. (11)

Given these conditions, civil society organizations are concerned about the growing number of states seeking to forcibly return Syrian refugees. In Denmark, hundreds of Syrians are at risk of being stripped of their residency status. (12) In Belarus, Syrian migrants have been deported back to Syria despite voicing security concerns. (13) Lebanon has also pursued an aggressive return agenda designed to pressure Syrians to leave that includes obstructing renewal of residency permits, curfews and evictions, forcing them to demolish concrete shelters, and deportation. (14)

In Turkey, between 2019 and 2021, over 155,000 Syrians had their residency permits revoked, were detained at deportation camps adjacent to the Turkey-Syria border, and later were forcibly deported to Syrian territory. (15) These numbers are only likely to increase, as Turkey recently unveiled a plan to repatriate one million Syrians. (16) Despite claims that these returns are “voluntary”, testimonies from deported Syrians say otherwise, with reports of exploitation, blackmail, and threats of long-term detention being used to force Syrians to surrender their residency permits. (17)

Refugees and migrants who have been deported back to Syria have stressed that deportations have adversely affected their lives. In addition to having their educational and vocational lives disrupted, many have been separated from their families. Syrians who have returned have been subjected to torture and other ill-treatment, unlawful and arbitrary detention, enforced disappearance and death in detention, sexual and gender-based violence, and persecution at the hands of the Syrian government and armed groups. (18)

Premature and forced returns to a still unsafe Syria may further destabilize the country. For example, the Turkish plan for repatriating one million Syrian refugees is predicated on settling them in Turkish-occupied areas in northern Syria. Many of these refugees did not originally call these Syrian provinces home; instead, many of these areas have historically housed majority Kurdish communities who have themselves been displaced. In Afrin, the Independent International Commission of Inquiry on the Syrian Arab Republic has documented systemic patterns of looting and property seizures by Turkish-backed opposition Syrian National Army (SNA) factions which have especially displaced Syrian Kurdish families. (19) Families who have had property seized are not only displaced but denied the right to return to their homes. (20)

Turkey now plans to resettle thousands of Syrians in northern Syria, including in Afrin, but these plans do not include the return of the seized properties of the communities’ original inhabitants. Moreover, settlements are being built in Afrin, such as a new settlement in Jabal al Ahlam, to house the military factions. (21) The result, if the plan moves forward, will be discriminatory demographic change – with minority Kurdish and Yazidi residents displaced from their homes to make way for Syrians being returned by the Turkish government from other provinces.

Turkey’s planned repatriation of one million Syrians into the northeast sets a dangerous precedent for communities across Syria. Efforts to protect the safe, dignified, and voluntary return of Syrian refugees must protect the rights of all Syrians, inside and outside of Syria and enable Syrians’ return to the communities from which they were displaced. Demographic changes to major Syrian provinces, the denial of the right to return to one’s home, land, and property, and the settlement of deported Syrians into seized homes and lands, threatens justice, reconciliation, and peace in the future.

In light of the aforementioned, our organizations:

– Call on the Commission of Inquiry to publish a comprehensive report on the human rights situation of Syrian refugees and IDP returnees.

Our organizations further urge the Human Rights Council and UN member states to:

– Maintain the position that Syria is not a safe destination of return and that any (future) returns must be safe, voluntary, informed and dignified.

– Refrain from returning or deporting people back to Syria, abide by the principle of non-refoulement, and immediately end policies and practices that remove refugee status or deprive displaced Syrians of temporary protection status.

– Push for a comprehensive political solution that incorporates the many components of Syrian society and provide a real opportunity for Syrian civil society to engage in the process. The UN should also expand the representatives who compose the Syrian Constitutional Committee to provide seats for communities who are currently underrepresented, such as northeast Syria as a long-lasting, true, and successful peace process cannot happen without the involvement of all of Syria’s diverse communities.

[…] Ankara’s latest announcement triggered concerns among human right organizations, which documented the forcible deportation of tens of thousands of […]