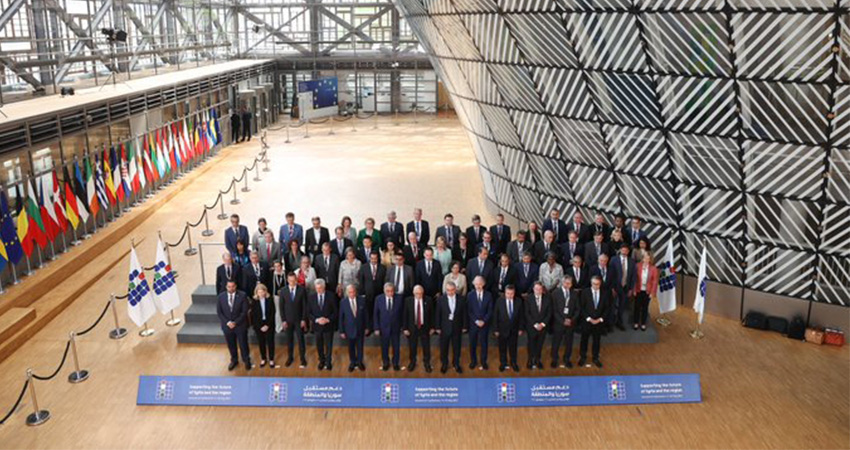 On 05 May 2022, Syrians for Truth and Justice (STJ) and civil society partners held a side event for Brussels Conference VI. Victims and representatives of Syrian organizations working to illustrate Housing, Land, and Property (HLP) violations against local communities in Syria, especially in the North.

Testimonies and findings by representatives of Hevdesti (Synergy), PÊL – Civil Waves, Serêkaniyê/ Ras al Ayn platform, Dudari Center for Peace-Building provided examples of common HLP violations and highlighted one of their key impacts – demographic change. Cases of demographic change across Syria are a growing cause for concern. During this Brussels VI side event, experts and victims discussed how patterns of demographic change are often discriminatory and target ethnic and religious minority communities. In the case of northern Syria, these communities are often Kurdish and Yazidi.

Following Turkish military operations, Kurdish-majority regions in Northern Syria have suffered systematic seizures and lootings of properties, as well as ongoing human rights violations such arbitrary detentions, blackmail, and torture by opposition Syrian National Army (SNA) factions. Panelists provided multiple examples of how locals of northern Syria were forced to sign papers surrendering their properties under threat of detention and torture. These violations often threaten women and girls, subjecting them to gender-based violations like sexual assault and forced marriage to the members of military factions.

These violations continue against local communities despite Turkey’s new plans to resettle one million Syrian refugees in the same region – many of whom are not originally from the area. The result will be demographic change, with Kurdish locals displaced from their original communities as part of a larger discriminatory “Arab Belt” project.

Our conversation, which is available to watch, demonstrates the serious impact of HLP violations on local communities and which threaten to keep Syria unsafe and unstable. Communities who are suffering HLP violations are often powerless to stop these violations, allowing perpetrators to continue committing crimes with impunity. Syrian organizations are attempting to support victims by documenting violations; however, this issue must be addressed by the international community.

The Brussels Conference sets the tone for global engagement with the Syrian crisis. It is therefore vital that participants in this year’s conference: