Under the slogan "The Right to Truth and Justice", the forum discussed the status of human rights in Turkey-occupied areas, and the local and international justice mechanisms available to victims of violations

November 3, 2022 105 views Download as PDF This post is also available in: Arabic Font Size A A A 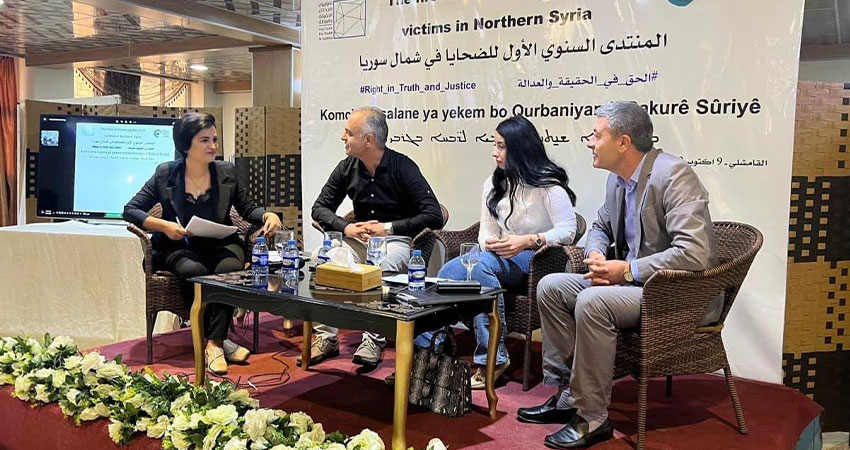 On 9 October 2022, Hevdestî/ Synergy Association for Victims and Syrians for Truth and Justice (STJ) organized the first annual forum for victims in northern Syria, under the slogan “The Right to Truth and Justice”.

Held in Qamishli/Qamishlo city, the forum coincided with the third anniversary of the Turkish-led Operation Peace Spring in the area.

The forum shed light on the situation of human rights in the Peace Spring strip, encompassing the cities of Ras al-Ayn/Serê Kaniyê and Tal Abyad.

Additionally, the forum discussed the justice mechanisms the victims have access to, at both the local and international level, and concluded with recommendations based on the victims’ perspectives, geared primarily towards the protection of their rights.

While most of the 50 attendees were present at the venue, others joined the panel online. In addition to the seven speakers, the participants included male and female victims, activists, and human rights defenders, as well as correspondents from local, regional, and international media outlets.

The partner organizations will hold the forum annually, aiming at providing the victims in northern Syria with a platform or a space through which they can speak for themselves, demand their rights, and coordinate their own affairs among themselves and with other victims.

Violations are Rife in the Strip

The discussion progressed along two interrelated themes: the situation of human rights and the justice mechanisms available to victims, and was introduced by the short film Undermining Peace and Coexistence.

The film documents the Turkish invasion of northeastern Syria, which started on 9 October 2019 and ended with Turkey’s occupation of the two cities of Ras al-Ayn/Serê Kaniyê and Tal Abyad. Turkey carried out the military incursion—code-named Peace Spring, in cooperation with several factions operating under the opposition’s Syrian National Army (SNA).

Within the scope of the first theme, four speakers, including Jwan Isso, the Relations Officer at the Committee of the Displaced of Ras al-Ayn/Serê Kaniyê, approached the status of human rights in the strip.

For her part, Sawsan Rashid, a researcher with PÊL- Civil Waves organization, elaborated on the violations of housing, land and property (HLP) rights in the strip and the Afrin region, demonstrating the dire repercussions these violations have for internally displaced people (IDPs), particularly children and women.

Approaching a second dimension of the situation, Sheikhmus Ahmed, Co-Chair of the Autonomous Administration of North and East Syria’s office for internally displaced persons and refugees, shed light on the worsening humanitarian conditions gripping people in IDP camps in the strip and the Afrin region. He pointed out that these camps remain unrecognized by the United Nations (UN), and thus are denied access to relief allocations and efforts.

Deviling into the political dimensions of Turkey’s presence in the strip, Shoresh Darwish, a Germany-based writer and lawyer, highlighted the threats the Turkification policy in northern Syria poses to the future of the country and the region. Additionally, he proposed measures to take the edge of the policy and eliminate its repercussions.

To put the discussion in perspective, the forum organizers presented motion graphics, summing up documented statists of human rights violations in the strip in the past three years. Hevdestî/ Synergy Association documented the deaths of 56 civilian men and women during and after Operation Peace Spring, 11 of whom were summarily killed.

Additionally, the association recorded the arrests of 511 other civilians, among them 68 women and 42 children. These violations were perpetrated by the Turkish military and the Ankara-backed SNA factions.

Moreover, the association revealed that over 185 of the detainees had been forcibly disappeared, as their families remain without the slightest idea about their fates.

Simultaneously, the association verified that 325 detainees were subjected to torture in the detention facilities operated by the armed opposition, noting that at least five of these detainees died under torture.

Additionally, the association confirmed that Turkey is involved in disappearing citizens from northeastern Syria and relocating them to Turkey.  The association documented the transfer of at least 92 Syrian detainees to Turkey during Operation Peace Spring. Of these, 48 were given arbitrary verdicts, ranging between 13 years in prison and a life sentence.

As a less direct consequence of Turkey’s occupation of the strip, over 150,000 locals from Ras al-Ayn/Serê Kaniyê and Tal Abyad remain deprived of access to their original places of residence.

While a large segment of the area’s population continues to struggle in the throes of displacement, Turkey and affiliated factions have settled over 2,500 IDP families from other Syrian regions in the homes of locals.

Keeping track of resettlements, Hevdestî/ Synergy Association verified that Turkey and the factions it backs have so far housed at least 55 families, women and children, of Islamic State (IS) fighters in the expropriated homes of locals displaced from Ras al-Ayn/Serê Kaniyê. The majority of these fighters are of Iraqi descent. Additionally, the association documented that the Turkish military and SNA factions have seized over 5500 houses, 1200 shops and industrial structures, and nearly a million dunums (100,000 thousand hectares) of agricultural plots across the strip, while they rendered 55 villages depopulated.

Building on the extensive discussions, the panel concluded that Turkey failed in observing its responsibilities towards the areas it occupies in northern Syria. Turkey has not taken any effective measures to establish security and ensure the safety of the population, ignored the intra-factional fighting between the SNA factions it supports, and turned a blind eye to the wide availability and use of weapons by civilians, all in the absence of accountability and the continuation of impunity.

Hevdestî/ Synergy Association documented no less than 72 blasts in the strip. The explosions killed at least 145 civilians, including women and children, and wounded over 300 hundred others between 9 October 2019 and 9 October 2022.

Additionally, over the first half of 2022 alone, the strip witnessed 46 intra-factional clashes between SNA factions, which killed at least three civilians and injured over 25 others.

Within the scope of the second theme, the victims and speakers engaged in extensive dialogue about current and prospective, local and international justice mechanisms, and the importance of effective participation on the part of victims, survivors, and their families in accountability and transitional justice processes in Syria.

In this context, Abdulsami’ Abdullah, an advocacy trainer with several international organizations, who has extensive experience in leading advocacy strategies and interventions, stressed the importance of advocacy and the actions victims can take to rally support for their cause.

He emphasized the vitality of the involvement of victims, survivors, and their families as their own primary advocates and the major role their engagement plays in garnering support. He pointed out that these three groups are the best to explain the context and provide sufficient information and evidence about the case, so as to construct clear messages, provide recommendations and suggest solutions.

Approaching justice mechanisms available to victims in Syria, Riyad Ali, a France-based legal consultant and former judge in Syria, highlighted the importance of documentation, and evidence and witness account collection, as the first step on the path to unveiling the truth, and thus realizing accountability and justice.

On his turn, Ezzedine Saleh, CEO of Hevdestî/ Synergy Association, stressed the right of IDPs to safe and voluntary return to their original places of residence. He cited Rule 132 of customary international humanitarian law, which provides that “Displaced persons have a right to voluntary return in safety to their homes or places of habitual residence as soon as the reasons for their displacement cease to exist.”

He added that by virtue of this right the relevant authorities must adhere to a set of legal obligations that revolve primarily around the fact that displacement is a temporary condition. This is established in the UN Guiding Principles on Internal Displacement. The principles assign to competent authorities—mainly those that caused the displacement—the duty and responsibility to create conditions and provide the means to enable the safe, voluntary, and dignified return of IDPs.

Both speakers and victims reiterated the necessity to raise awareness about the importance of the documentation of human rights violations for uncovering the truth, which remains a basic right for the victims in their pursuits to hold perpetrators accountable.

Building on key highlights from the speakers and inputs from the victims, STJ and Hevdestî/ Synergy Association laid down several recommendations, aimed at the victims themselves, and local and international entities concerned with issues of justice and accountability: