The camp’s residents are lacking vital medications and chronic diseases’ medicines, while fearful of the geographical location of their camp, where their tents are at risk of being washed up

The first death case, due to cold and lacking healthcare, was recorded in the Deir Ballut camp in the Jindires district in the region of Afrin, Aleppo province; reporting the incident, the field researcher of Syrians for Truth and Justice/STJ said that the camp’s people are enduring deplorable humanitarian conditions, while concerned for their tents, which might be washed up by deluges, given the geography of the region and the camp’s location.

STJ’s field researcher in the region reported that Mahmoud Yassin Abu Madi, a Palestinian national born in 1964, who has been lately displaced from the Yarmouk Camp neighborhood, Damascus, passed away on November 18, 2018, unable to access healthcare and lacking necessary medicines.

A male nurse at the camp’s dispensary told STJ’s field researcher the following:

“On the evening of November 18, 2018, patient Mahmoud was hospitalized, due to a cardio-respiratory arrest. The preliminary diagnosis entailed a heart attack; the attempt at resuscitation lasted for 25 minutes. Mahmoud, additionally, had asthma and blood pressure-related disorders.”

One of the patient's second-degree relatives, called Jawdat, informed STJ’s field researcher of the following:

“Mahmoud developed stress issues due to cold, which affected his health. When he was hospitalized, his condition was very poor.”

Prior to his death, Mahmoud Yassin Abu Madi wrote a post on his Facebook account, describing his health status, his deteriorating conditions and suffering due to illness, because the camp’s dispensary lacked the medications he needed. 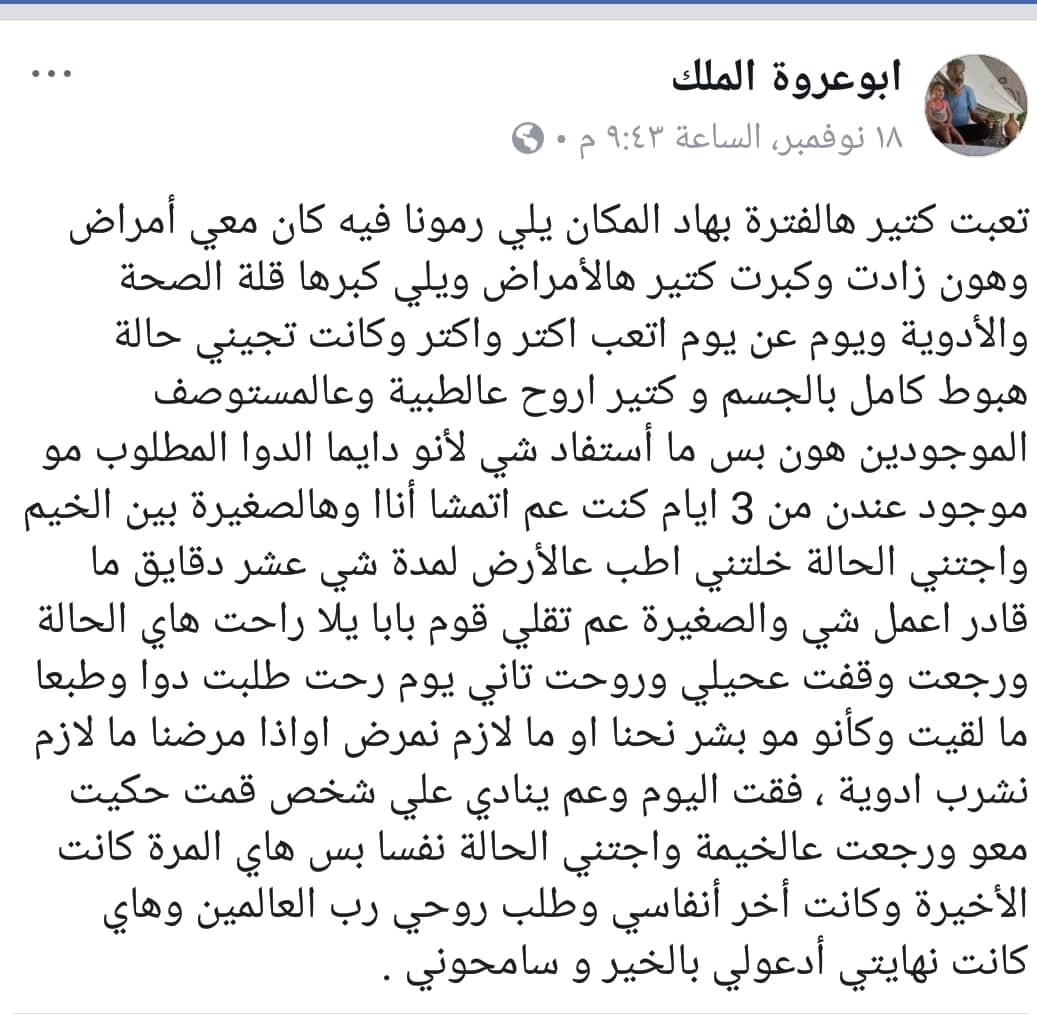 A copy of Mahmoud Abu Mady’s Facebook post published less than an hour before his death on November 18, 2018. Part of the post says: “I am overworn these days, in the place where they detached us. I had illnesses. Here, they increased and worsened. What caused this is the lack of healthcare and medicines. Day after day, I am growing more tired. I have always suffered cases where all of my body felt weak; I sought the medical point and the dispensary here but to no avail, because the medicine I needed was always missing [. . .]”.

The Deir Ballut camp incubates about 850 internally displaced families, the majority of whom are displaced from the Yarmouk camp neighborhood and towns in southern Damascus, including about 1500 children. In the camp, there is a dispensary, three educational tents, and a smaller medical tent, founded by volunteer nurses, displaced themselves.

It is worth mentioning that the camp was constructed immediately after the Operation Olive Branch, which corresponded to the evacuation deal of the Yarmouk Camp.

The camp’s people are short on essential medications and chronic diseases’ medicines, for the camp’s storage is limited to antibiotics, painkillers and a few of the medicines needed for children, while the closest pharmacy is 5km away from the camp, where no transportation means are available. The camp is also lacking heating means and electricity, due to which the people resorted to the primitive kerosene-oil stove, which causes sensitivity to inflation of the respiratory system and harms children and adults who have asthma and chest infections.

The people of the Deir Ballut camp have for several times demanded that AFAD organization, responsible for it, move the camp to another location, considered safer when it comes to natural factors. Today, the camp is erected in a very low plain, while surrounded by high hilltops, which creates the potential for deluges to form upon massive rainfalls, which, in turn, will sweep the tents away since the area lacks a sewage system. Despite this, the people’s demands met no answer, STJ’s field researcher reported.

On May 21, 2018, the Syrian regular forces controlled the Yarmouk Camp, under a deal they signed with the opposition armed groups back then, which provided for the departure of those refusing the reconciliation with the Syrian government from the area towards Syria’s north.