September 13, 2018 34 views Download as PDF This post is also available in: Arabic Font Size A A A

A child killed and 15 others injured in Aleppo southern countryside by Syrian regular forces shelling, besides the death of two children by a cluster bomb explosion; the bomb was a remnant of a previous shelling carried out between the 3rd and 10th of September 2018, according to testimonies STJ has obtained.

Ibrahim al-Haj, the information officer in the Syrian Civil Defense Directorate of Aleppo, stated in an interview with STJ on September 11, 2018 that the Syrian regular forces stationed near Shaghidlah Dam, shelled Birnah town randomly on September 10, 2018, killing a girl child; Marwa Shlash, and seriously injuring another. 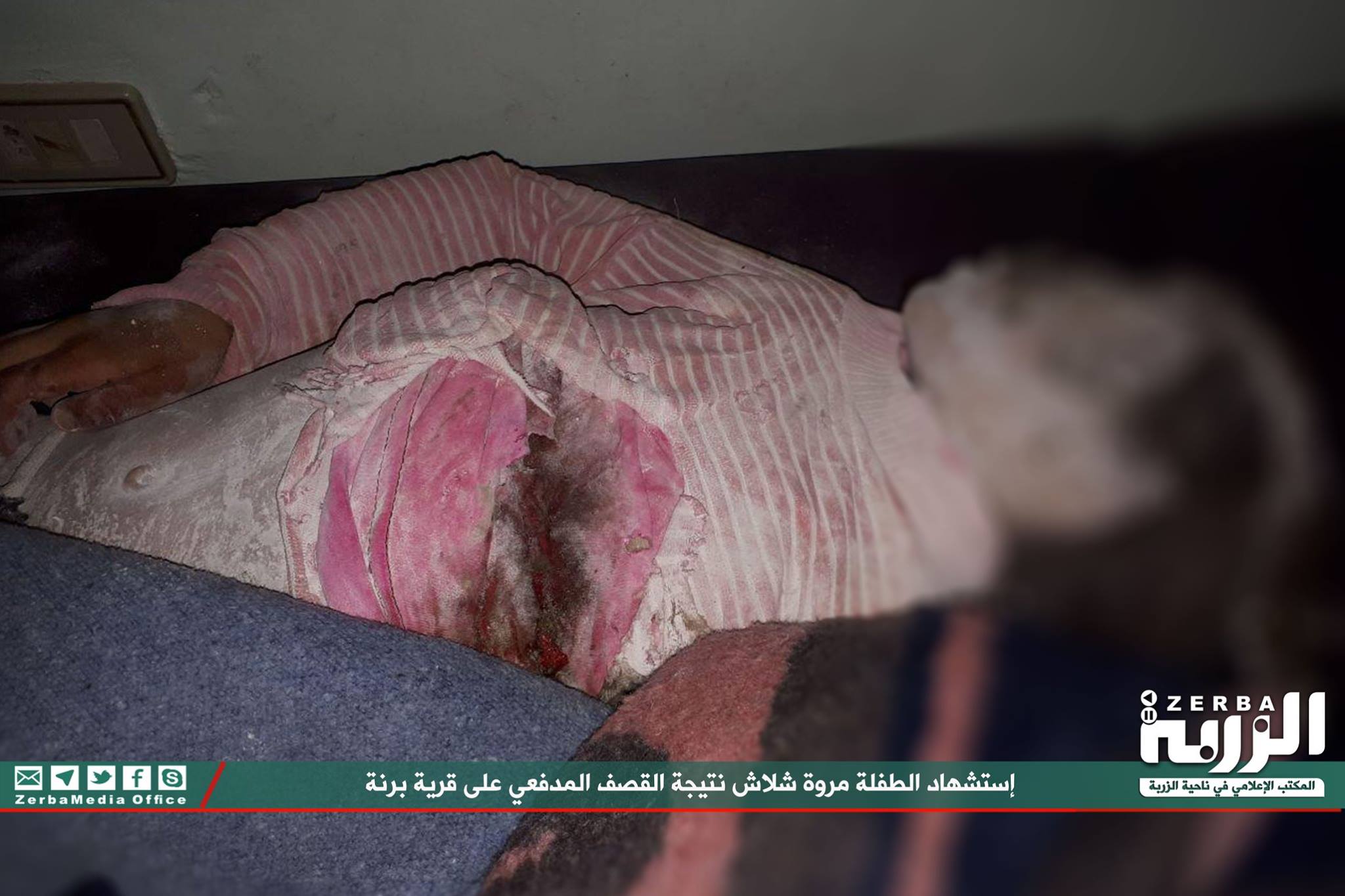 The Syrian regular forces’ shelling on Aleppo southern countryside spread over many days during September 2018; on the 3rd, towns of Jazraya, Zammar, and Uthmaniyah, shelled by artillery stationed in Tell Alloush. On the 6th and 7th, Jazraya was targeted with mortar shells. While artillery shells targeted Jazraya, Khalsah, Khan Toman, Birnah, Zitan, Mosherfa, on the 8th, Jazraya, Uthmaniyah, Mosherfa, and Darnah on the 10th, and targeted Tell Bajer from forces stationed in Tal Mammo on the 11th, according to al-Zerbeh village media center, run by local activists.

Fawaz Juayeed, director of the media center in al-Zerbeh, stated to STJ in an interview on September 12, 2018, that the shelling mainly targeted both towns of Jazraya and Zammar near the conflict lines between the Syrian regular forces on one hand and the National Front for Liberation and Hayat Tahrir al-Sham (HTS) on the other hand, noting that People were residing the east section of both villages, 100 family in each, displaced recently after the shelling had intensified.

There were no civilians in Khalsah village, while only 30 families were in Zitan, given the majority of families have displaced to Talafeh and al-Jadidah villages due to the intensified random shelling on their towns close to conflict lines, Juayeed added.

On the other hand, the media center in al-Zerbeh documented the killing of two displaced children; Omar Hussein al-Hameed, 13, from Abysan village, and Issa Ibn Abdo, 10, from Kaddar village, as a result of a cluster bomb explosion, which was a remnant of a previous bombing, in al-Zerbeh on September 3, 2018.

Leaders of three Astana guarantors countries: Russia's Vladimir Putin, Turkey's Recep Tayyip Erdogan and Iran's Hassan Rouhani, in their Tehran summit, on September 7, 2018, took up the situation in Idlib de-escalation area and decided to address it in line with the spirit of cooperation that characterized the Astana format, as the final statement stated.[2]