A photo shows students protest for closing one of “Free Aleppo University” faculties by “Salvation Government” and members of HTS in Al Dana city, on January 2nd 2018. Credit: Activists from the city

The “Salvation Government”[1] that is active in the Tahrir al-Sham[2], aka HTS, held areas in northern Syria issued a decision that states “ to preserve of buildings and properties” of all faculties of the “Free Aleppo University” in Sarmada city, Idelb countryside, which is in turn subordinated to the National Coalition for Syrian Revolutionary and Opposition Forces’ Syrian Interim government. HTS also stormed the abovementioned faculties and evicted the lecturers on august 15th 2018, according to testimonies collected by STJ.

According to an official statement by the Salvation Government’s Local Administration and Services Ministry that was issued on August 15th 2018, stamped and signed by the branch administrator “Ahmad Muhanna” and Branch Manager “Abdulrahman Jameel”, “It is decides to preserve the buildings and properties of all faculties in Sarmada city until establishing the high education council and handing over those buildings and properties. To be circulated to the individual person concerned”. 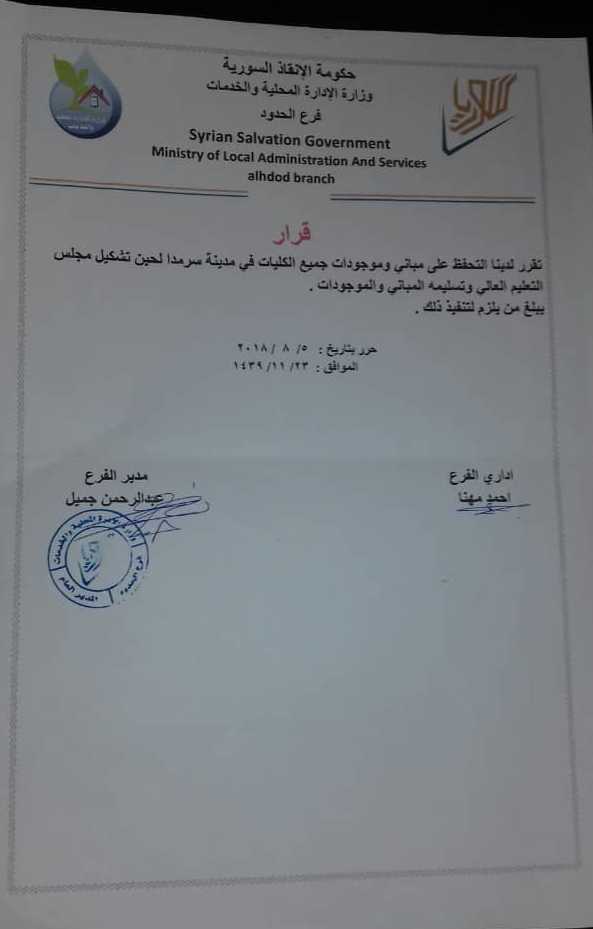 A copy of the decision issued by the “Salvation Government” about preserving the faculties in Sarmada city on August 15th 2018.

One of “Free Aleppo University” staff, who is resided in Sarmada city, Sami Al Shami[3], in a conversation with STJ on August 15th 2018, said that HTS members stormed the faculties and evicted the lecturers along with preventing them from taking any papers related to the students. Additionally, they overtook all buildings, equipment, and documents, noting that the faculties ended the mid-term exams last week.

Concerning the reason behind issuing the decision of “preserving the faculties”, Al Shami said that “The reason is that Free Aleppo University refused to subordinate to the higher education council of the salvation government. They already threatened us to close the faculties in previous meetings as they told us “ You either subordinate to our higher council, or you must leave the areas that we control”, according to “Al Shami”.

On the morning of 16 August 2018, faculties’ students in Sarmada city tried to enter the campus to retrieve their official documents and papers, however, they were stopped by armed members who were safeguarding the faculties, according to “Al Shami”.

“Al Shami” noted the importance and danger of taking over the documents and references of the students as he said “The students paid large amounts of money for having report card or reference documents from the regime government departments. These documents are irreplaceable unless with great difficulty and high financial cost, as preserving these reference documents is a responsibility of the party that took over the faculties”.

“Al Shami” stated that “Salvation Government” , and throughout the affiliated local councils, called for all “Free Aleppo University” faculties in the HTS held areas to be closed and handed over, about one month ago. However, the faculties in Sarmada city did not close as they were in the process to start the exams.

“Free Aleppo University decided to relocate its faculties and institutes from Al Dana and Sarmada cities to Al Atareb city in the western countryside of Aleppo. The step of the salvation government in taking this decision came as a proactive action by taking over them. It also closed the faculties in Al Dana city before the relocation”, according to “Al Shami”.

Based on the conversation with “Al Shami”, the “Syrian Interim Government” chose the locations of the faculties and institutes to be relatively away from danger such as Al Dana and Sarmada cities on the Turkish border, despite the fact that they are controlled by HTS. Following the “Salvation Government” decision, these faculties will be obliged to be relocated to more dangerous areas that are exposed to shelling, and perhaps towards areas close to line of contact with the Syrian regular forces.

The “Salvation Government” previously closed the Syrian Interim Government’ faculties and institutes in Al Dana and Sarmada cities in January and February 2018 as students protested at the closing and HTS arrested some of them. Afterwards, and due to media pressure and talks, the faculties were opened, as stated by “Al Shami”, who noted that the “Salvation Government” took over the entire building of Free Aleppo University presidency in Al Dana city, which obliged it to relocate it to the western countryside of Aleppo.

“Free Aleppo University” subordinates with all of its faculties and institutes to the Syrian Interim Government of the National Coalition for Syrian Revolutionary and Opposition Forces. It includes 7,000 students. The faculties are distributed to different areas in Aleppo and Idleb provinces, including Sarmada city that includes the following departments; Faculty of Arts with all four departments (Geography, History, Arabic Literature, and English Literature) with about 800 students, Faculty of Political Science with about 150 students, division of Faculty of Economy with about 100 students, Technical Institute of Media with about 150 students, Technical Institute of Business Administration with about 100 students, according to “Imad Al Khatib”, the vice-president for scientific affairs in “Free Aleppo University” with a conversation with STJ on 15 August 2018.

[1] On October 7th 2017, the establishement of “Salvation Government” was announced to administer Idleb province and the areas controlled by “Tahrir Al Sham” aka HTS. It was emerged from “Statutory Body” that in turn was emerged from “Syrian General Conference” that HTS convened fro on September 17th 2017. All sessions and the sessions of forming the government were held in Bab Al Hawa crossing point, on the Turkish border

[3] A pseudonym, to guarantee the witness’ safety.