Kidnapping Took Place in Shabaki, Eastern Countryside, in Conjunction with the Armed Offensive Launched by the Islamic State on July 25, 2018

Image published by Swaida News Network showing the mass funerals of those passed away in the attacks on al-Sweida province on July 25, 2018.

At least 21 civilians, being women and children, from the al-Sweida province, predominantly inhabited by the Druze sect, were kidnapped  in conjunction with the recent military attacks launched by the organization that calls itself The Islamic State, also known as ISIS, against several villages in al-Sweida on July 25, 2018, which had resulted in the death of at least 240 persons, being civilians or armed individuals from the "Domestic Protection Groups" and the injury of 170 others in a non-final outcome.

Shadi Sa'eb, the journalist and the activist who resides in al-Sweida, said in an interview with STJ on July 26, 2018, that they documented the kidnap of 19 women and girls in addition to 3 children from Shabaki village, located in the eastern countryside of al-Sweida, by the elements of ISIS during their ground offensive on the village. The journalist said there are more than 19 other kidnapped whom their identity had yet to be defined.

Local activists from al-Sweida circulated images of the 21 kidnapped persons published by ISIS-run Amaq News Agency without referring to their fate. The activists called and appealed for their release. 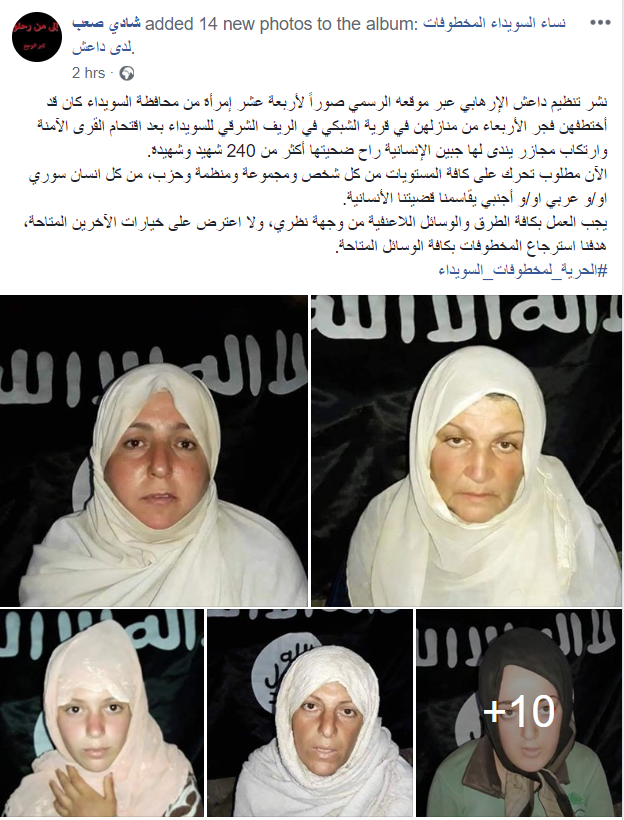 Image taken from social media showing photos of the women kidnapped on July 25, 2018, by ISIS from Shabaki village located in the east countryside of al-Sweida. Amaq News Agency, loyal to ISIS, had published the photos and the province activists circulated them.

Sa'eb said that on June 26, 2018, Amaq News Agency published a video footage showing the execution of four previous kidnapped persons by ISIS, two of them were from al-Sweida province who were kidnapped two months ago in the eastern Badia of the eastern countryside of the province. The journalist considered that posting this video footage in synchronization with the offensives and the last kidnap operation is but a message to intimidate the residents of the area.

On the other hand, the toll of the victims of the bloody attacks on the province was 240 deaths and 170 wounded, mostly civilians, and the rest were the young men who belonged to "the Domestic Protection Groups", which are independent groups that affiliate no faction or military party and was formed by the residents of theses villages to defend their villages, and they carry light weapons. The Domestic Protection Groups encountered the offensives launched by ISIS, according to the journalist Shadi Sa'eb.

In the same context, a doctor who refused to disclose her identity for security purposes, that works in a hospital in the province said to STJ on July 27, 2018, concerning her testimony,

"Following the explosions and the clashes occurred in the east countryside, large numbers of the wounded got to the hospital, they were affected with gun shots and explosive bullets, they were transferred to the National Hospital of al-Sweida. Through the checkup, we noticed that two kinds of bullets were used in the attacks. The first kind was explosive bullets and the second one was suspected to contain toxic substance, and we will try to analyze the projectiles of the bullets that were extracted from the bodies of the wounded. The surprising thing that make us suspect that there is poisonous substance inside these bullets is that the wounded showed symptoms of charring on their bodies in addition to the death of many of them suddenly at night or a day after receiving treatment, although their injuries were minor. The preliminary assessments refer to the existence of poisonous substances. In addition, the same symptoms of charring was shown on the body of a young man who was affected by a bullet from a sniper in the left side of the jaw, which emphasize our suspicious." She said.

On July 25, 2018, al-Sweida province had witnessed bloody attacks and explosions that targeted the city center, in addition to a ground offensive against 8 villages in the eastern countryside. The Islamic State-ISIS announced responsibility of the attacks claiming that it had targeted military zones and security headquarters of the Syrian regular forces, which was denied by local activists who confirmed that the attacks were on civilian gatherings.