Daraa: The Regime Forces advance and the victims are mainly civilians

Pro-government forces managed to partially control Buser al Harir town and to isolate the Lajat area in the eastern countryside.

Smoke rises from a residential neighborhood in Nawa city, after being targeted by an air strike on Tuesday 26 June 2018. Photo credit: Nabaa Media Foundation.

Russian and Syrian warplanes launched raids on several cities and towns, killing and injuring at least 35 people including civilians, as confirmed by STJ field researchers in Daraa- southern Syria.

A field researcher said that the Syrian regular forces had advanced into Buser al Harir town from the eastern axis, headed from their positions in As Suwayda western countryside, while they advanced to Melihit Al Atash village from the western axis. Those who took part in the operation are "5th Division" and "12th Brigade" located in Izraa town. With this advance and gaining control the pro-government forces was able to blockade and isolate the Lajat area from the rest of eastern countryside of Daraa[1]. As a result, the natives couldn’t flee the Shiaàra, North Kraiym, South Kraiym, Bawidan, Sakra and El Hawsh villages because they fall into the isolated area.

Abu Maen, a local activist from the Lajat area, told STJ on Tuesday, 26 June 2018, that more than 1,000 families were trapped in scattered villages in the besieged Lajat area.

In addition, the air force targeted residential areas in several cities and towns of Daraa Governorate, killing a civil defense volunteer in Buser al Harir while helping the wounded. Five people, including two women, were also killed and 25 others injured, including five children, by Russian airstrikes on Nawa city in the western countryside[2], according to the Syrian civil defense. Air strikes killed also four people in Al Musayfrah town and an another one in El Sourah village.

Image published by the civil defense of the volunteer who was killed as a result of an airstrike on Buser al Harir town on June 26, 2018.

For its part, the United Nations Office for the Coordination of Humanitarian Affairs (OCHA) expressed “alarm” at recent reports of civilian deaths and injuries including children in Daraa Governorate, since the government forces launched an offensive to restore rebel-held areas in southwest Syria. Noting that the lives of some 750, 000 people in danger due to fighting on the ground and bombardments from the air.

Jens Laerke, the deputy spokesperson for OCHA, said that at least 45,000 people have reportedly been displaced mostly from eastern Dara'a governorate to areas near the border with Jordan. Noting that the displaced people are in urgent need of shelter and humanitarian aid. Laerke said that the civilian infrastructure has also reportedly been attacked and damaged including a field hospital in Al Hrak city, which was hit by an air strike last Sunday.

This was coincided with the announcement made by the Jordanian Foreign Minister Ayman Safadi, on June 26, 2018, through a tweet on his Twitter official account, saying that his country would not open its borders to people fleeing Daraa, 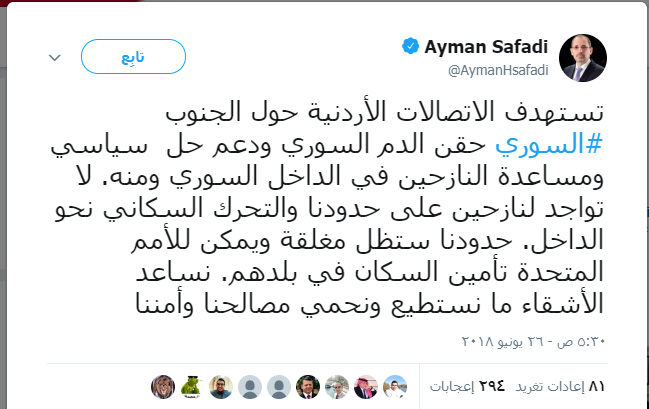 The Central Channel of Hmeimim Military Base announced through a post on its Facebook official account[3] on June 26, 2018, that the agreement on the southern de-escalation zone in Syria was terminated.

Despite all the warnings made by the international community and UN, pro-government forces launched a major military escalation against Daraa Governorate, as from June 15, 2018. STJ has published a flash report in this regard, entitled: “A Violent Military Escalation on Daraa, and Waves of IDPs as a Result” the report highlighting the bombardment on the western and eastern countryside of Daraa from 15 to 20 June 2018.