“Death Followed Them Even Inside Basements” 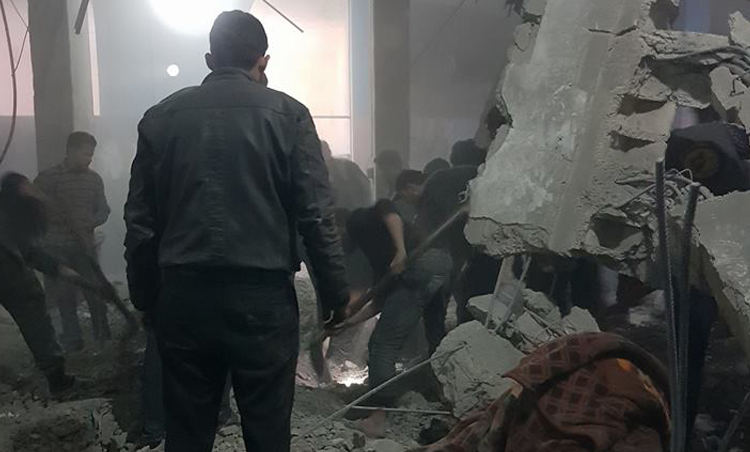 Cover Photo: an image shows some of the devastation to a basement located in Irbin city following the aerial bombardment on March 19, 2018. Photo credit: Coordination of Irbin City

Introduction: Since the onset of the heaviest military campaign launched by the Syrian regular forces and its Russian allies on eastern Ghouta on February 18, 2018, many civilians were forced to take refuge inside basements or holes that dug by primitive means, thinking that they would be a safe haven from death. Nonetheless, the violent bombardment by the Syrian regime and their allies was able to reach beneath the ground, changed lives of many civilians to inferno, and demolished a number of shelters above heads of those inside.

On February 20, 2018, a grave massacre was committed in Beit Sawa, town and claimed lives of 50 civilians, mostly women and children, following bombarding a shelter with barrel bombs.

According to the field researcher of Syrians for truth and justice (STJ), since the last military campaign on Eastern Ghouta, the reconnaissance aircraft affiliated to the Syrian regular forces have not been absent from the skies of Eastern Ghouta, as it films all areas where civilians gather in order to bombard them. He pointed that many cellars in Eastern Ghouta have been subjected to deliberate shelling by several strikes from warplanes.

STJ had earlier prepared a report entitled “Tunneling Underground Becomes the only Hope to Survive in Eastern Ghouta”,  a Flash Report Highlights the Dire Humanitarian Situation of People Living in Underground Cellars due to the Brutal Military Campaign on Eastern Ghouta.

STJ had further prepared a report titled “the Neutral Safe Triangle Turns into a Triangle of Death”, A Flash Report Documenting the Military Escalation on Zamalka- Eastern Ghouta on 11, 12, 13, 14, and 15 March 2018.

It should be recalled that the Syrian regular forces and their allies had an agreement with Jaysh al-Islam on April 8, 2018, that required release of all detained abductees[1] by militants of Jaysh al-Islam in exchange for allowing fleeing, to the north of Syria, the militant along with their families. A similar agreement had been reached with Faylaq al-Rahman on March 23, 2018, which required evacuating fighters of Faylaq al-Rahman, Hayat Tahrir al-Sham (HTS)/al-Nusra along with their families, as well other civilians who wish, to northern Syria. The agreement included Irbin, Zamalka, Ein Tarma, and Jobber.

The United Nations Office for the Coordination of Humanitarian Affairs (OCHA) has described the situation in Syria as “bleak” in the wake of the UN Security Council resolution calling for 30-day ceasefire throughout the country.

First: 16 children and 4 women are victims of the Bombardment on a Basement in Irbin

At 6:30 p.m. March 19, 2018, a warplane believed to be Russian bombed a shelter located in as-Sarut neighborhood in Irbin City, and claimed lives of twenty civilians, mostly women and children. Mohammed al-Qalesh, a local from Irbin city, confirmed this to STJ and said:

"During the recent military campaign, people of Eastern Ghouta have not seen sunlight; night and day became the same for them, especially after they fled to basements and tunnels to escape the shelling, but death followed them even to the ground. On the evening of March 19, 2018, the Russian warplanes bombarded a shelter located in as-Sarut neighborhood in Irbin city with a highly explosive rocket fired directly towards the building where the shelter exists. The rocket penetrated three roofs and exploded inside the basement, killing innocent children who do not know the meaning or dirtiness of war. Twenty people were killed, including 16 children and four women, knowing that the basement had been a school transformed to a shelter because of the intensification of shelling the city."

A satellite image illustrates the location of as-Sarut neighborhood in Irbin. 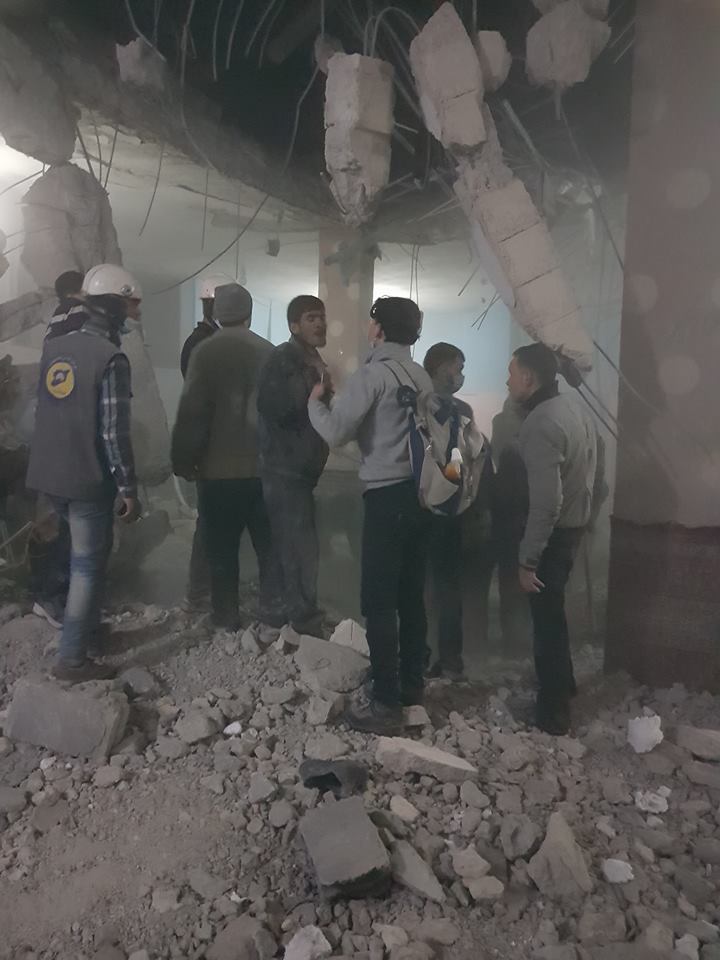 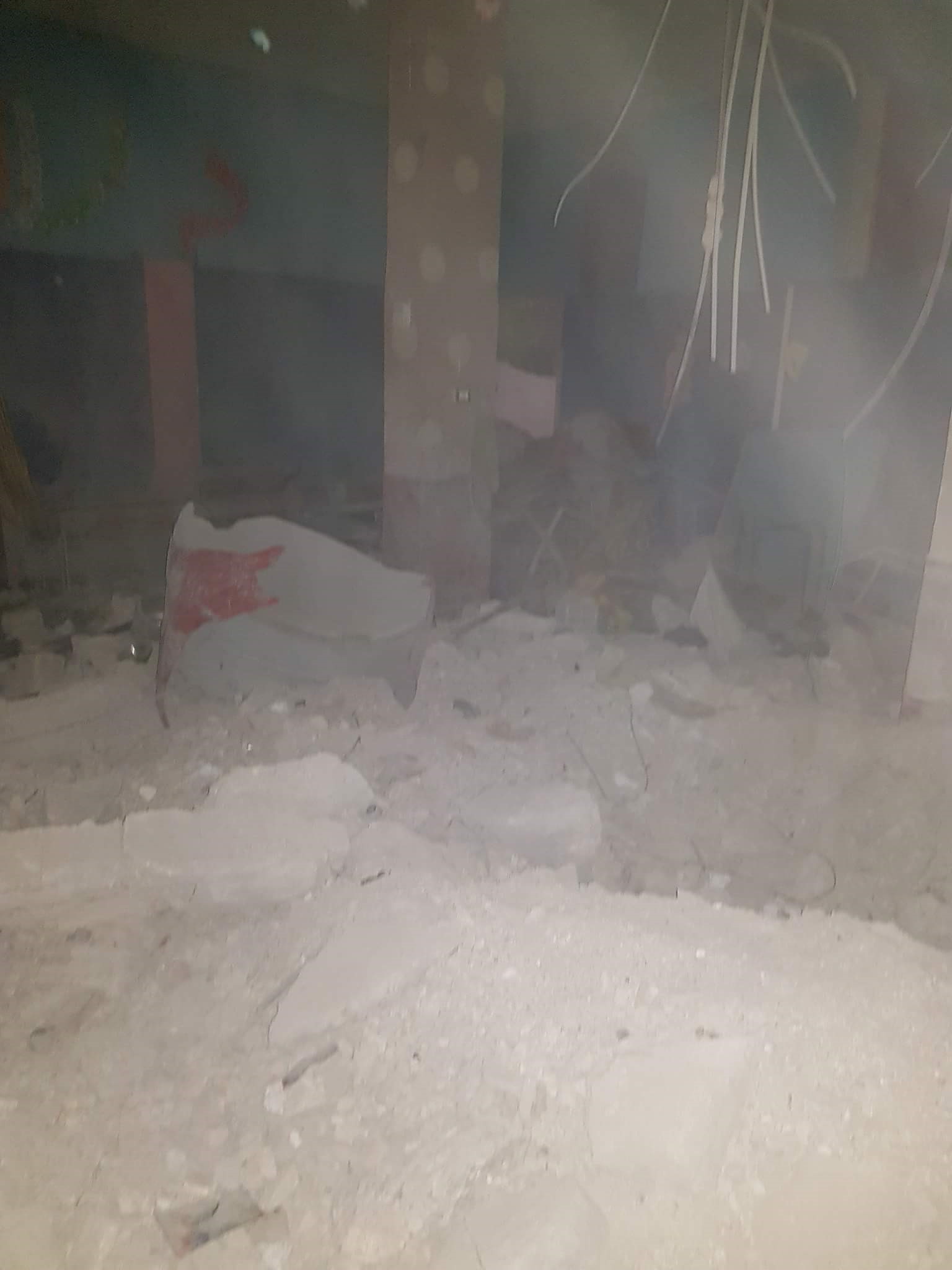 Images show a side of devastation affected to a shelter in Irbin following the aerial bombardment on March 19, 2018. Photo credit: Coordination of Irbin City.

STJ’s field researcher could document identities of the civilians killed in the bombardment on a shelter in Irbin on March 19, 2018, they are:

Second: Children Victims in Bombarding a Shelter in Zamalka

The Irbin massacre was not the only one in Eastern Ghouta; it had been preceded by several other massacres of the same kind, as on March 16, 2018, a shelter in Zamalka was exposed to aerial bombardment by warplanes believed to be Russian. The shelter housed many people who had displaced from other towns. Concerning this incident, Ali Moheiydin, a media activist in Zamalka said to STJ:

"At 8:00 a.m., a shelter next to at-Tawfeeq Mosque, east of Zamalka city, was targeted with a missile directed by Russian warplanes. The rocket entered directly from a small window at the top of the basement; the window was to let some air and light in but the rocket entered through it and exploded inside the basement to kill 15 civilian, mostly children and women. It should be recalled that the mosque had housed large numbers of displaced families.” 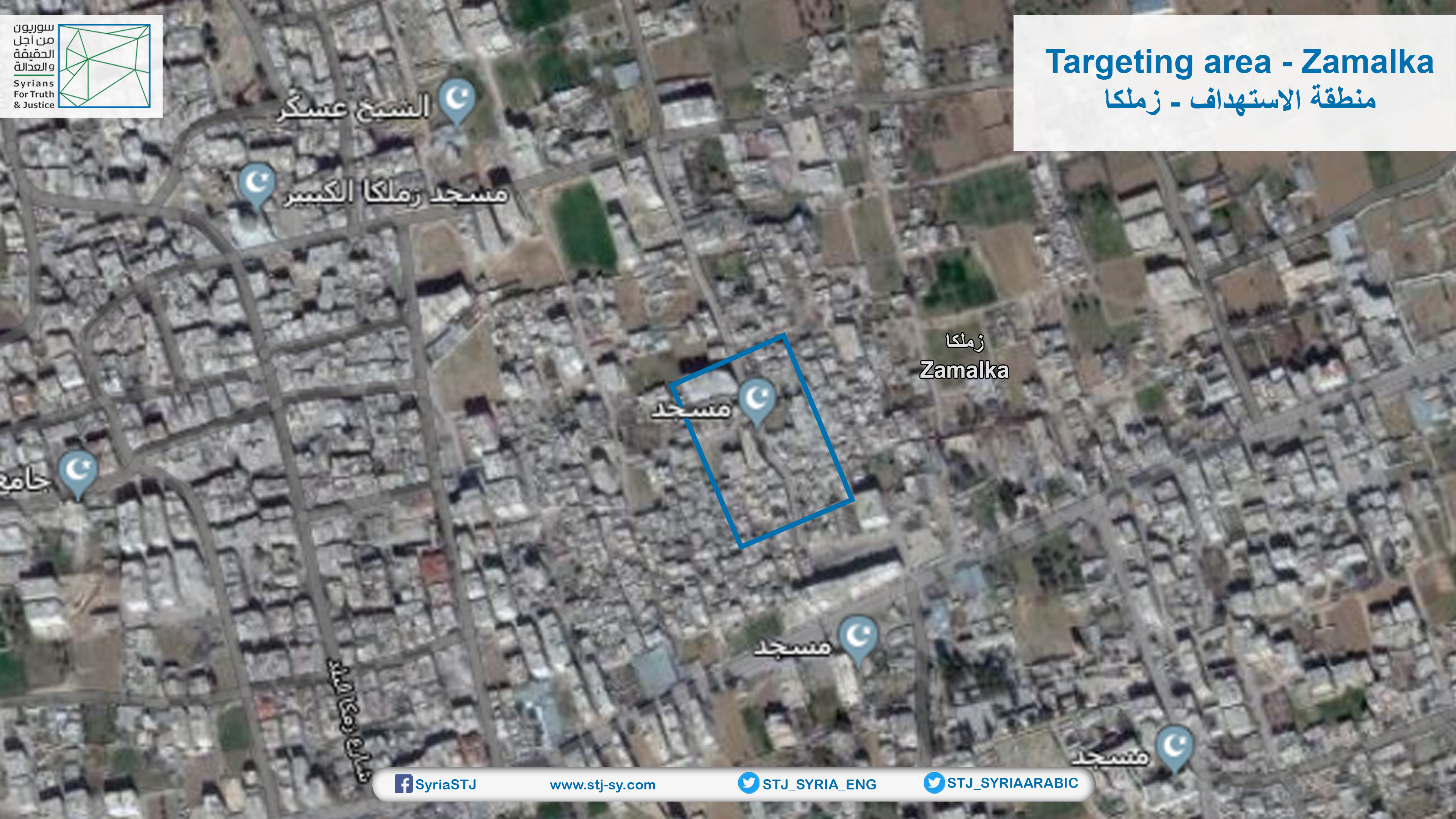 Third: Beit Sawa- A Horrible Massacre after Bombarding a Shelter

On February 20, 2018, helicopters affiliated to the Syrian regular forces committed another massacre killing at least 50 civilians, mostly women and children, in Beit Sawa town. The helicopter dropped two barrel bombs on a building with a basement that housed a large number of people.  In this regard, Mohammed Juma, a resident from Beit Sawa, spoke to STJ:

“At 4:00 pm, while I was at home, the helicopter threw a barrel bomb on a building in the town, but I heard no explosion. Immediately, the helicopter threw another barrel bomb, and the two barrels exploded together. As soon as I learned of casualties, I went directly to the impact site, at the entrance of Beit Sawa from the side of Hamoryah city, and was shocked to see horror of the catastrophe. The first barrel bomb had fallen directly on the surface of a building that had two stories and a basement, but did not explode, and the second barrel bomb had fallen in front of the cellar’s door. Then, both barrels exploded together and demolished the building along with the basement completely."

All of the people who sought refuge inside the basement were either killed due to the intensity of the explosion or chocked when the building demolished over them. Whole families passed away in this massacre, Juma said.

"The tragedy was compounded when rescue teams delayed in arriving at the impact site, since the rescue and fire extinguishing teams have become the target of helicopters and warplanes. Bodies of the victims were pulled with simple equipment for three consecutive days because the basement had housed a large number of the townspeople and the displaced. There had been whole families who died in the massacre, such as al-Qilaa’ Family, al-Boqae’i Family, al-Mesri Family, and Juma Family. All of the victims, the majority women and children, were buried in mass graves that were dug hastily." 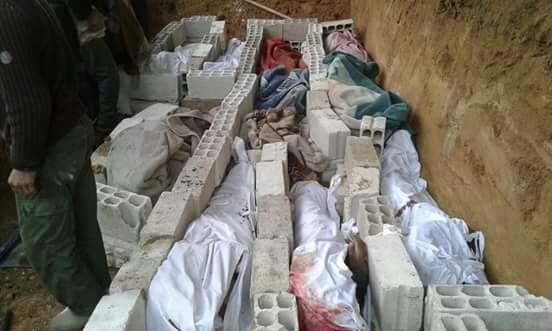 Some images show some bodies of the dead victims due to bombing a shelter in Beit Sawa on February 20, 2018. Photo credit: the local revolution council in Beit Sawa.

A video footage posted by activists showed testimonies concerning the massacre in Beit Sawa town, following the bombardment of a cellar on February20, 2018. The video, filmed by the Syrian American Medical Society (SAMS) shows an eyewitness, who reported the following:

"The warplanes’ attack destroyed a two-storey building, which contained a basement where many civilians were sheltering. 42 civilians were killed, mostly women and children."

Hamza as-Sayied, Director of SAMS’s office in Eastern Ghouta, narrated as shown up in the video:

"The Civil Defence teams were unable to reach the impact site in Beit Sawa due to the repeated attacks conducted by the regime, nor could the rescue teams because of the intensity of the shelling."

Another video footage published by “Sharqiya Press” showed some bodies of dead victims after the massacre in Beit Sawa on February 20, 2018.

STJ’s field researcher documented identities of 42 civilian casualties following the attack on a shelter in Beit Sawa on February 20, 2018. They are:

[1] They have been detained because of charges of supporting the Syrian regime.