“The Neutral Safe Triangle” Turns into a Triangle of Death!

An image shows a side of the devastation caused to Zamalka, following the violent shelling of March 12, 2018. Photo credit: Damascus Media Centre.

Preface: All of Eastern Ghouta cities and towns were subjected to violent and brutal attacks by the Syrian regular forces, during March 2018, the heaviest of which was on Zamalka town, which witnessed on 11,12,13,14, and 15 March an unprecedented military escalation during which the pro-government forces used many types of weapons, such as barrel bombs, vacuum rockets and cluster munitions, causing many civilian causalities killed or wounded.

According to Syrians for Truth and Justice/STJ field researcher, this violent escalation followed unofficial statements by the Negotiating Delegation[1] in Eastern Ghouta, which addressed the armed and their families who are unwilling to settle with the Syrian regular forces, and people of the central sector (Hamoryah, Saqba, Kafr Batna, Hazeh and Jisreen), calling them to leave their areas towards what it called (Jobar, Ein Tarma and Zamalka) triangle, referring to it as safe and natural area. According to several testimonies obtained by STJ, once a large number of people gathered in that area, the Syrian regular forces turned it into a target of fire, causing more civilian casualties.

It should be recalled that the Syrian regular forces and their allies had reached an agreement with Faylaq al-Rahman , on March 23, 2018. Which required evacuating Faylaq al-Rahman, Hay'at Tahrir al-Sham/Al-Nusra Front fighters with their families, and any other civilians who did not wish to come back under Assad’s rule to northern Syria. The agreement, which included the towns of Irbin, Jobar, Ein Tarma and Zamalka, was preceded by a similar one between the Syrian regular forces and  Ahrar al-Sham al-Islamiyya Movement in Harasta on March 21, 2018, this agreement led to evacuate the militants of the Ahrar al-Sham al-Islamiyya Movement along with their families and civilians who wish to leave to northern Syria as well.

The United Nations Office for the Coordination of Humanitarian Affairs (OCHA) has described the situation in Syria as "bleak" in the wake of the UN Security Council resolution calling for 30-day ceasefire throughout the country.

STJ had earlier prepared a report entitled "Repeated Attacks with Incendiary Weapons, Cluster Munitions and Chemicals on Eastern Ghouta", a flash report documenting the events of 7 March 2018 in Hamoryah and those of 10 and 11 March 2018 in Irbin.  STJ had prepared also a further report entitled "Masked Compliance; The use of flyers by the Syrian regime ", a special document providing examples of threatening "Flyers " dropped by the Syrian Regime Forces over Eastern Ghouta people concurrently with barbaric bombardments, and it is a joint report between STJ and the Syrian Legal Development Programme. 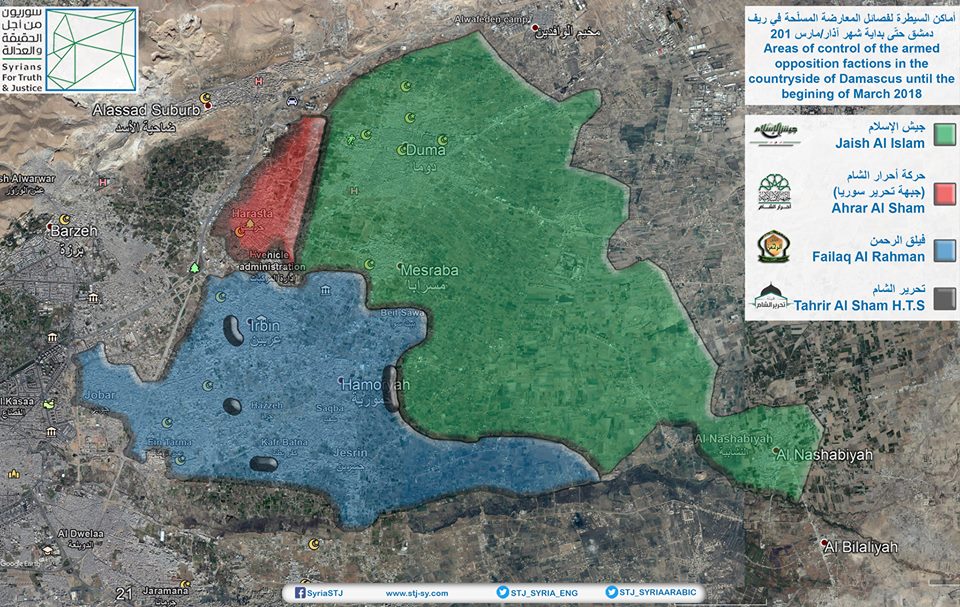 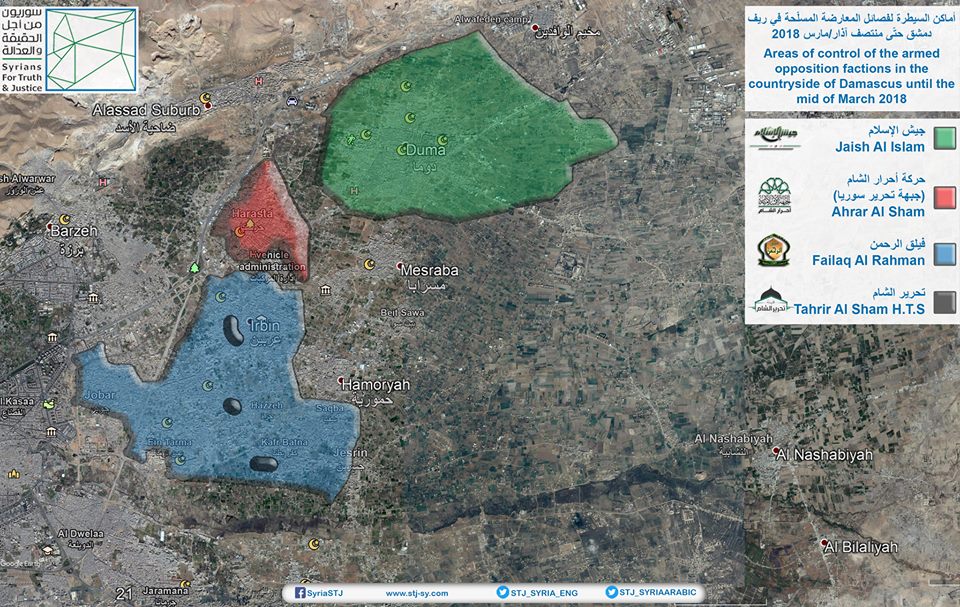 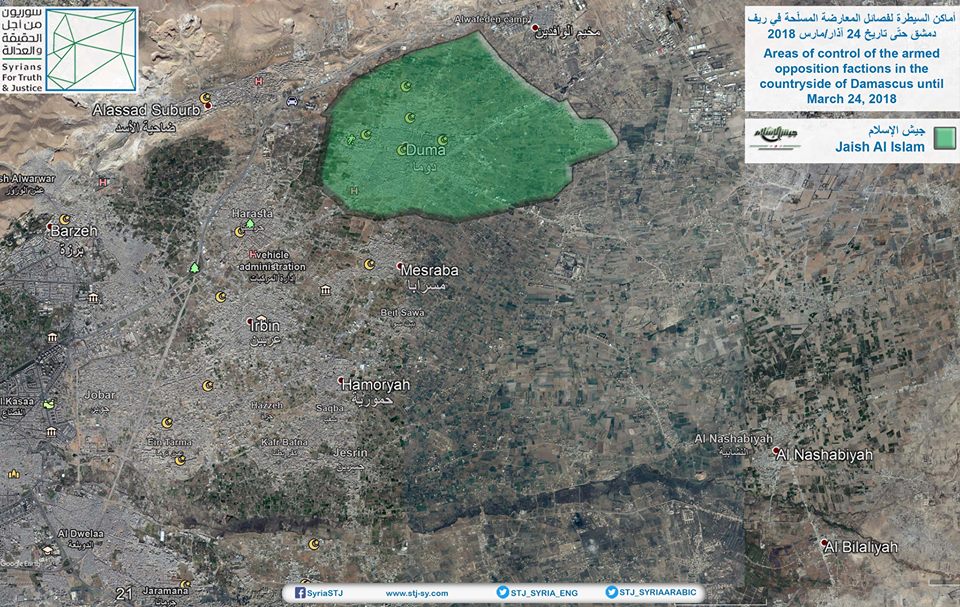 First: Airstrikes on Zamalka and the Use of Prohibited Weapons

Following the declare of the "Jobar, Zamalka and Ein Tarma triangle", as an area for those not willing to settle with the Syrian regular forces, the latter has escalated its military operations to the said areas, on Sunday, 11 March 2018, the town of Zamalka was subjected to an air strike which resulted in the death of six civilians. That was followed by a further escalation on Monday, 12 March 2018, when the town was targeted with eight air strikes loaded with vacuum rockets, four barrel bombs, artillery shells and cluster bombs, which were fired at residential neighbourhoods in Zamalka, killing 10 civilians, including four displaced from (Irbin, Jobar and Al-Marj). The dead of that day who were been identified are (Murdia al-Mubakher from Irbin town and the children (Muhammad Salama al-Awad, Omran Ka’adan, Firas Munawar and Ola Khadouda), Ammar Noah, Muhammad al-Baghdadi and Muhammad Ahmed Ja’aidani. 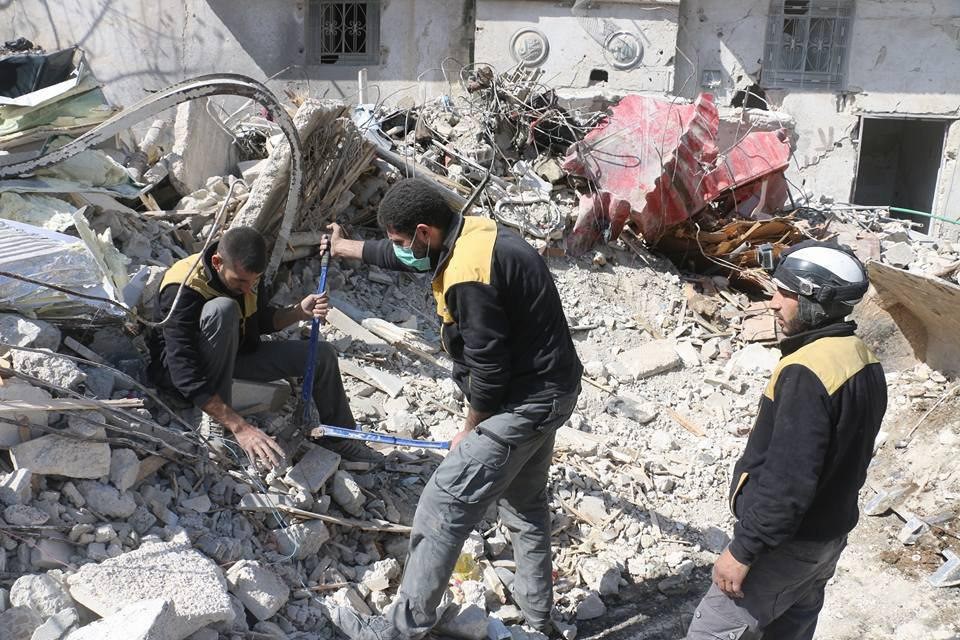 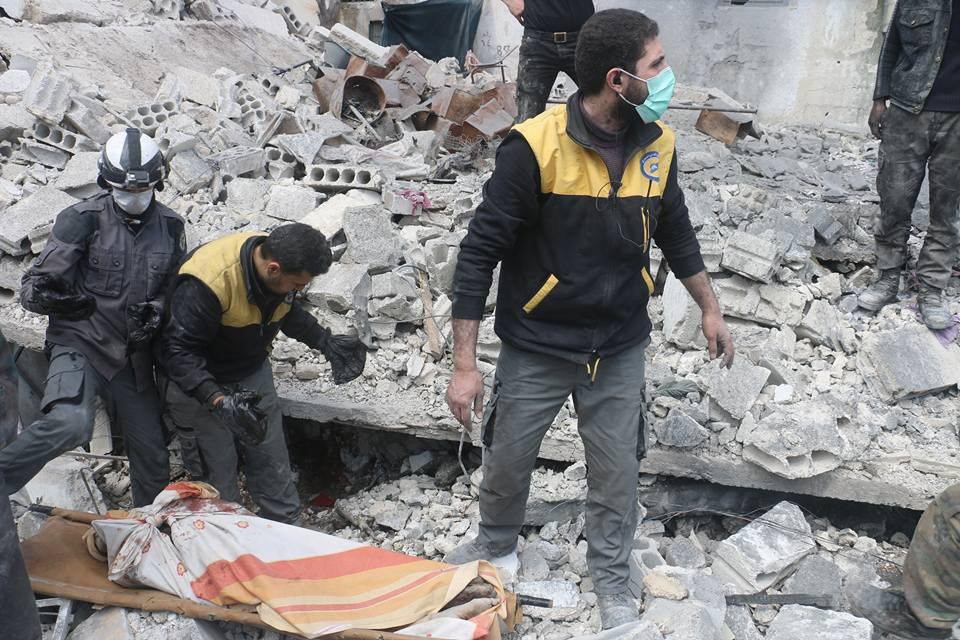 Image showing a side of dead recovery in Zamalka, following the violent shelling of March 11, 2018.
Photo credit: Jobar News. 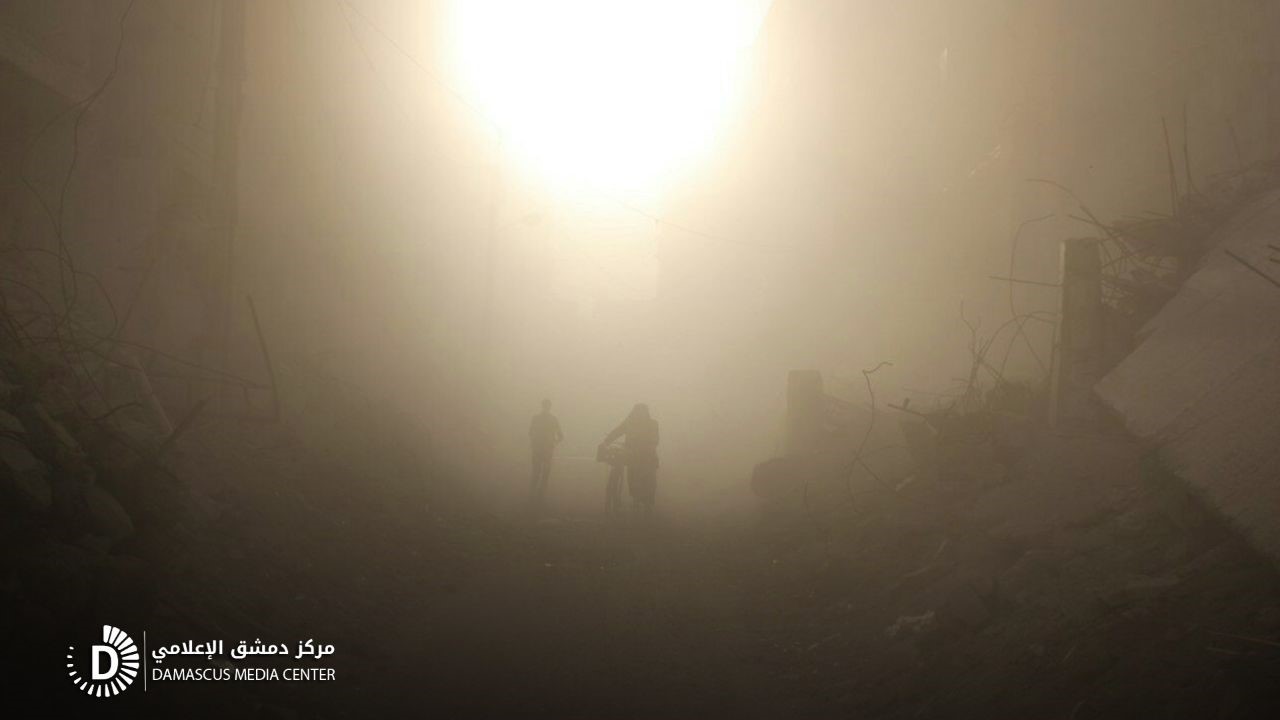 Other images show a side of the devastation caused to Zamalka, following the violent shelling of March 12, 2018.
Photo credit: Damascus Media Centre.

On Tuesday, March 13, 2018, the Civil Defense Centre in Zamalka was bombed, which resulted in the killing of one of its staff (Rifaat Idris) and the injury of three others. Besides the death of a woman named "Tasneem al-Ghadab", a displaced from Herzma town.

Image shows the victim "Rifaat Idris" before his death as a result of an air raid on the Civil Defense Centre in Zamalka on March 13, 2018.
Photo credit: Syrian Civil Defense in Rif Dimashq.

On Wednesday, 14 March 2018, shelling residential neighborhoods in Zamalka continued, as the town was targeted with five air raids and fired with four barrel bombs, which resulted in the death of a civilian (Walid Anas al-Zaw), as well as civilian casualties,

On Thursday 15 March 2018, after dozens of families displaced from Hamoryah city towards Zamalka town, Syrian regular forces’ helicopters dropped 24 barrel bombs on the town, causing a massacre of 20 civilian deaths, including 9 locals  and 11internally displaced from the cities and towns of (Jobar, Hazeh, Irbin, Beit Sawa, Hamoryah, Al-Abbada and Hawsh al-Zawahra), as well as some 70 civilian injures, including women and children, according to STJ field researcher, one of these barrel bombs was loaded with toxic gas, however, the medical centers received no suffocations, owing to the direction of the wind that took the gas to distant directions.

Qasim al-Shami, a media activist from Zamalka, spoked to STJ about the military escalation on Zamalka during March 2018, where he said:

"Zamalka is a densely populated town, with approximately 70 thousand inhabitants, 60 thousand of which are displaced from another areas. Zamalka town was relatively calm at the beginning of the military campaign, though it had been bombed but less than other areas had. The Regime intended not to bomb Zamalka intensively like what it did to other Eastern Ghouta areas, to let people displace to it from the rest cities and towns. Indeed a large number of civilians gathered in Zamalka. After the town had become overcrowded, specifically on March 10, 2018, pro-government forces escalated their shelling dramatically by Syrian and Russian warplanes, rocket launchers and helicopters, which dropped barrel bombs on residential neighborhoods. The Regime targeted the town with more than six ground-to-ground missiles and missiles carrying cluster bombs fired by warplanes. This dangerous escalation led to massacres of civilians, where 11 civilians killed on Monday March 12, 2018, and that had been preceded by another massacre of seven members from the same family on Sunday, March 11, 2018.”

Al-Shami noted that the pro-government forces had recently promoted that; Jobar, Zamalka and Ein Tarma, is a triangle where the militants and people of Hamoryah, Saqba, Kafr Batna and Jisreen who do not want to settle with the regular Syrian forces should head to. Explaining that the announcement was a part of the prevarication policy, the Syrian regular forces pursued, that the latter intended to gather the greatest possible number of civilians in one place to bomb them, with the aim of perpetrating the largest number of massacres against the people of Eastern Ghouta. 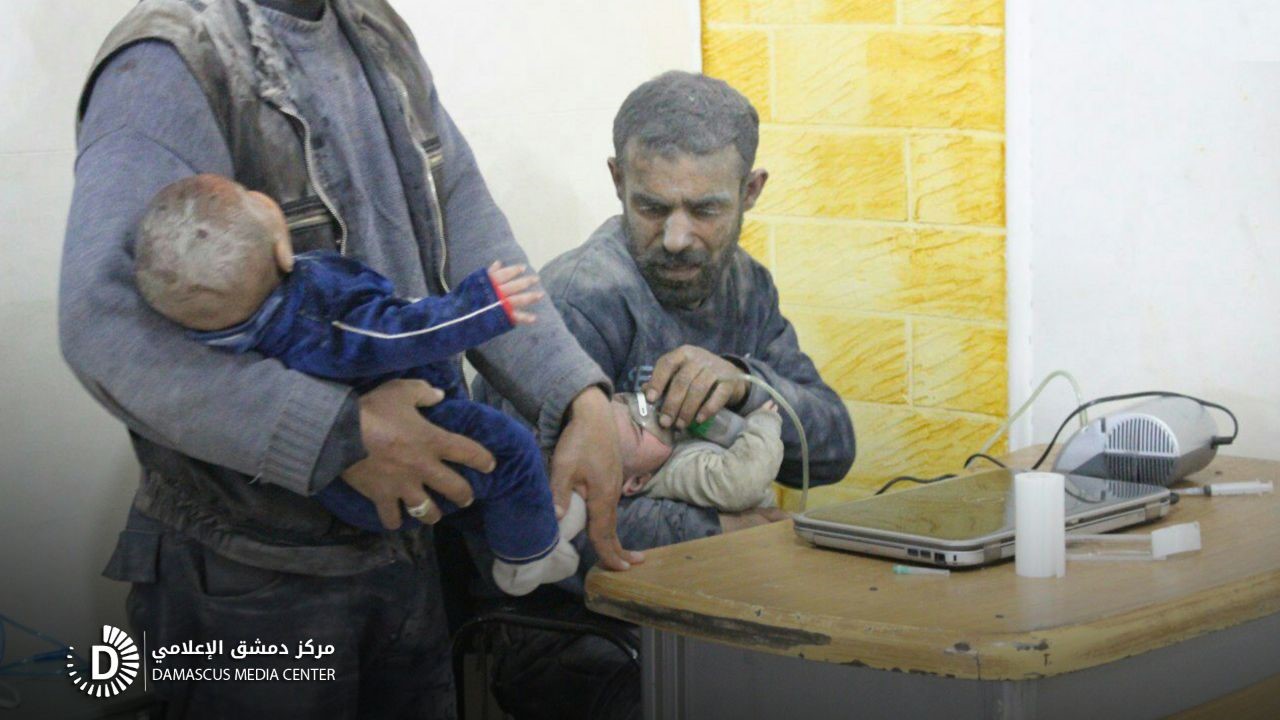 Images show some of the injured civilians, following the violent shelling on Zamalka during March 2018.
Photo credit: Damascus Media Centre.

Video footage aired by Syrian Scene Agency showed a side of recovering bodies following the massacre in Zamalka on Monday, 13 March 2018.
Damascus Media Centre also published a video footage showed the rotation of more than one helicopter in shelling Zamalka and Hazeh with barrel bombs on March 15, 2018.

[1]  According to several sources, it was formed following the recent military campaign launched by the Syrian forces on Eastern Ghouta on 18 February 2018, after the United Nations entered the scene to broker negotiations between Faylaq al-Rahman and the Russians.