Joint Report: Bellingcat and Syrians for Truth and Justice/STJ

Preface: On February 4, 2018, Saraqib[1] located in the southern countryside of Idlib was hit by a poisonous gas attack[2]. A helicopter affiliated to the Syrian regular forces threw two barrel bombs loaded with chemicals believed to be chlorine gas on the eastern neighborhood of the city, which is one of the populated areas, causing 12 civilians to be suffocated, including a child and three Civil Defence volunteers, according to many testimonies obtained by Syrians for Truth and Justice/STJ.

According to STJ reporter who visited the impact site, the strike location of the two barrel bombs, loaded with poisonous gases, had had some herbs that changed its colour from green to yellow following the attack. The reporter pointed out that the recent attack had caused a massive exodus by the locals, who used to inhabit the eastern district of the city, towards safer adjacent cities and towns.

Manhel Haji Hussein, one of the people who inhaled the poisonous gases resulting from the recent attack, spoke to STJ, saying:

"At about 9 p.m. while I was with my family at home, we heard the sound of a helicopter approaching, and only minutes later, there had been a strange smell inside the house. I began to feel shortness of breath, severe pain in the throat, and burns in the eyes, and then I fainted. After that, the Civil Defence teams arrived, transferred me to the hospital, and provided health care to me at a medical point adjacent to the city."

Mohammed Haji Qasim, a member of the Civil Defence who went directly to the strike location after the attack, was injured after inhaling the gas. He said:

"We received an appeal (call) through the observatories that were monitoring the movement of warplanes in the city's skies that a helicopter had thrown barrel bombs, which did not explode, on the eastern district of Saraqib. Immediately, we rushed to the strike location, and there were several injuries in the neighborhood, so we worked to evacuate them to the medical centers adjacent to Saraqib since many of the city's hospitals have been out of service recently because they were targeted by the regime and allies. Once I arrived at one of these medical points, I began to feel dizziness, and itch and redness in the eyes. Soon, the necessary treatment was provided to me; my clothes were removed and my body was washed with water and soap. In addition, we were given antibiotics and we were subjected to spray with the oxygen. At last, I got out from the hospital."

In testimony obtained from Hasan Qaddour, one of the medical personnel in Saraqib who treated the victims, he stated they had received several cases of suffocation due to the inhalation of toxic gas, believed to be chlorine gas ,on the evening of February 4, 2018:

"The injured showed symptoms such as nausea, redness in the eyes, shortness of breath and burns in the throat, and all these symptoms indicate that they inhaled poisonous gases that could take away their lives if they were not provided the necessary care quickly. The medical staff at the medical points worked to provide health care to patients directly; we have documented 12 civilians who suffered from suffocations, including one child and three volunteers in the Civil Defence. All injuries ranged from light to medium."

A civilian who was exposed to the gas used in the attack in Saraqib on February 4, 2018.
Photo credit: STJ

One of the injured who was exposed to the gas used in the attack in Saraqib on February 4, 2018.
Photo credit: STJ

Origin of the Attack

One of the supervisors of the Aviation Observatory, which monitors the movement of warplanes in Saraqib skies, told STJ that at 9:00 p.m. on February 4, 2018, a helicopter with a designation “Alpha 253” had taken off from al-Manjazrat School, located in Hama countryside, and headed towards the north of Syria. The officer added:

“The helicopter entered the airspace of Saraqib from the south heading to the north, and when it reached the city from the east, it dropped two barrels, which did not explode and were loaded with poisonous gases.

Immediately, we delivered appeals to the people in the Eastern district of the city to evacuate the place after we heard through the wireless walkie-talkie that the helicopter successfully completed the mission and was on its way back."

The Impact Site and Munitions Used

According to Bellingcat, the impact site was filmed by SMART News Agency, and photographed by the Edlib Media Center, and Naba News. Using these images it is possible to geolocate the impact site to 35.863044, 36.820206, on the east side of Saraqib, in a large grassy area surrounded by residential buildings. 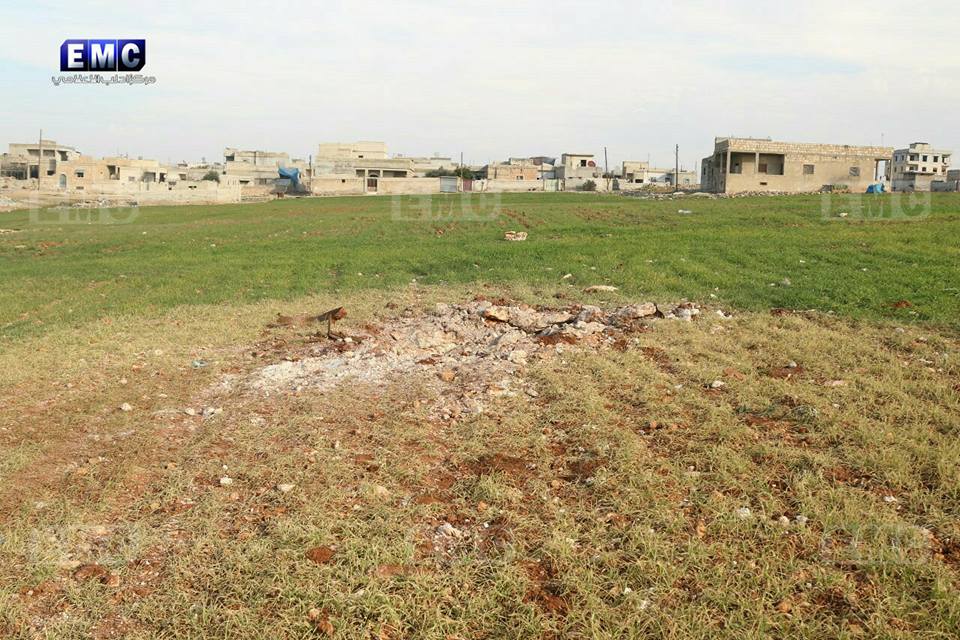 In these images it is possible to see a large area of yellowed grass surrounding the impact crater. This yellowing is likely caused by the release of the chlorine gas damaging the plants, a well recorded phenomenon, also seen in prior chlorine attacks in Syria.

Yellow of plants at the site of the February 1st 2018 chlorine attack in Douma, Damascus
Image Credit – Syrian Scene Agency

A video from Syrian Civil Defence in Idlib Governorate and a photograph published by the Syrian Network for Human Rights shows a heavily damaged yellow gas cylinder reportedly recovered from the impact site:

The gas cylinder was also photographed on behalf of STJ: 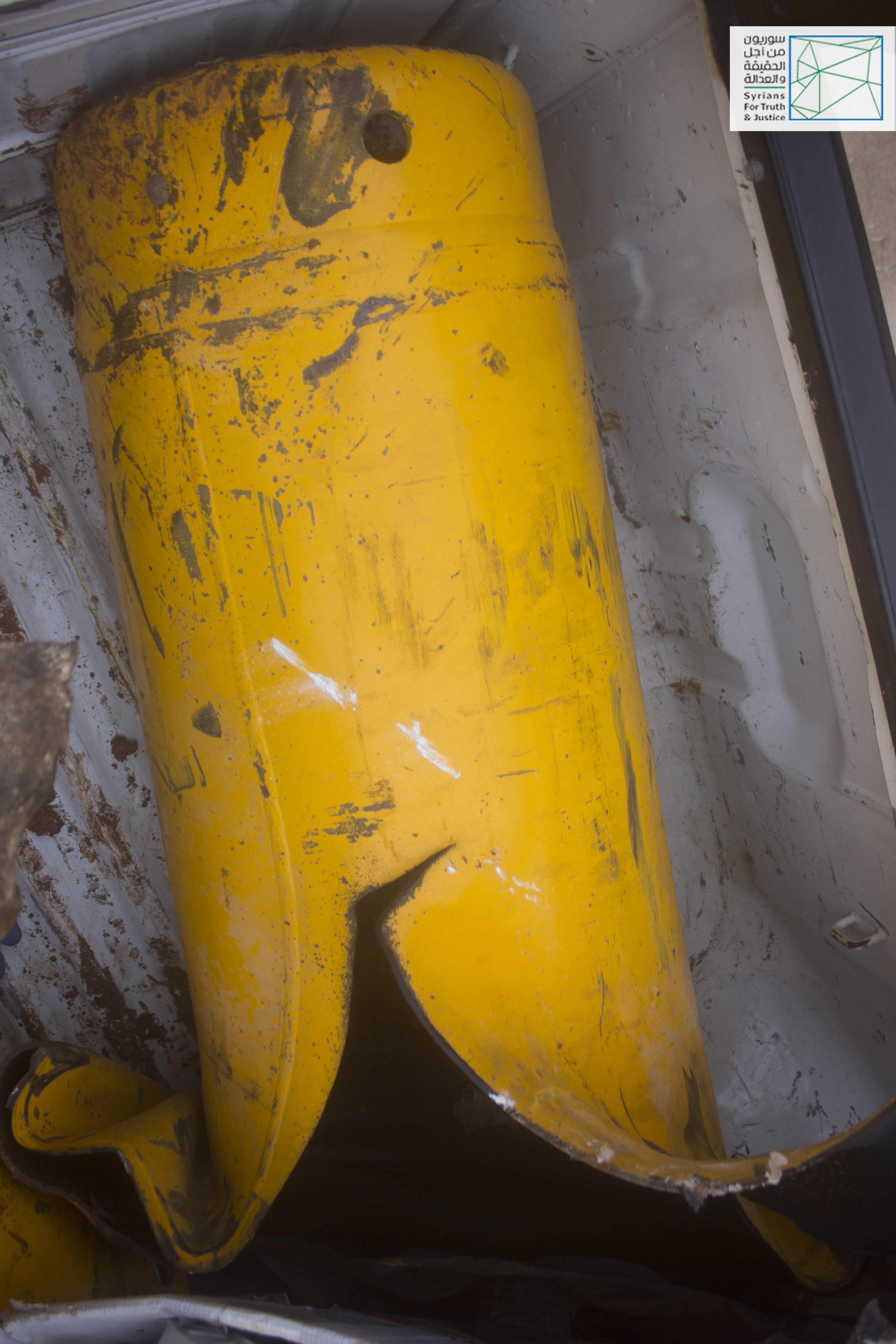 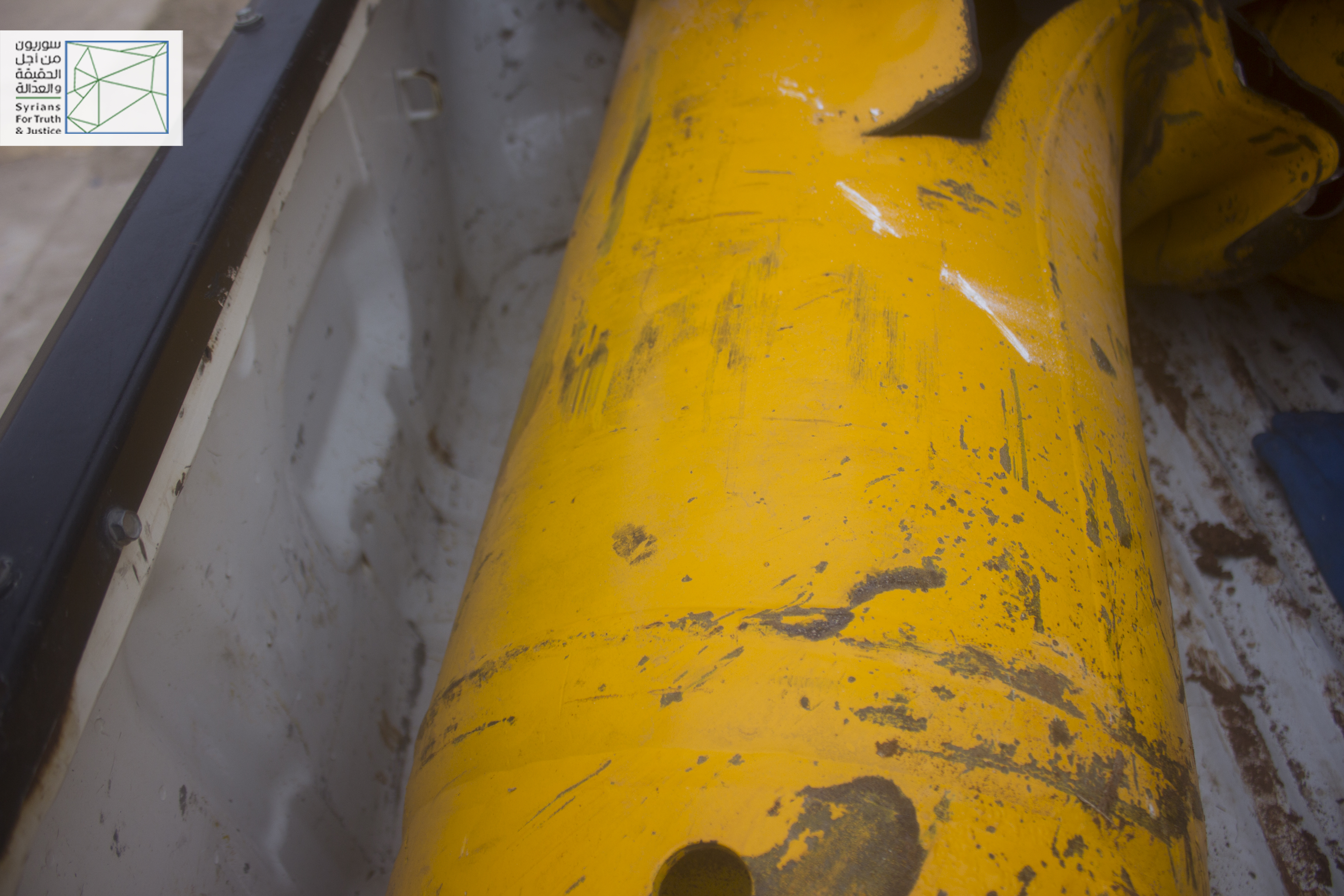 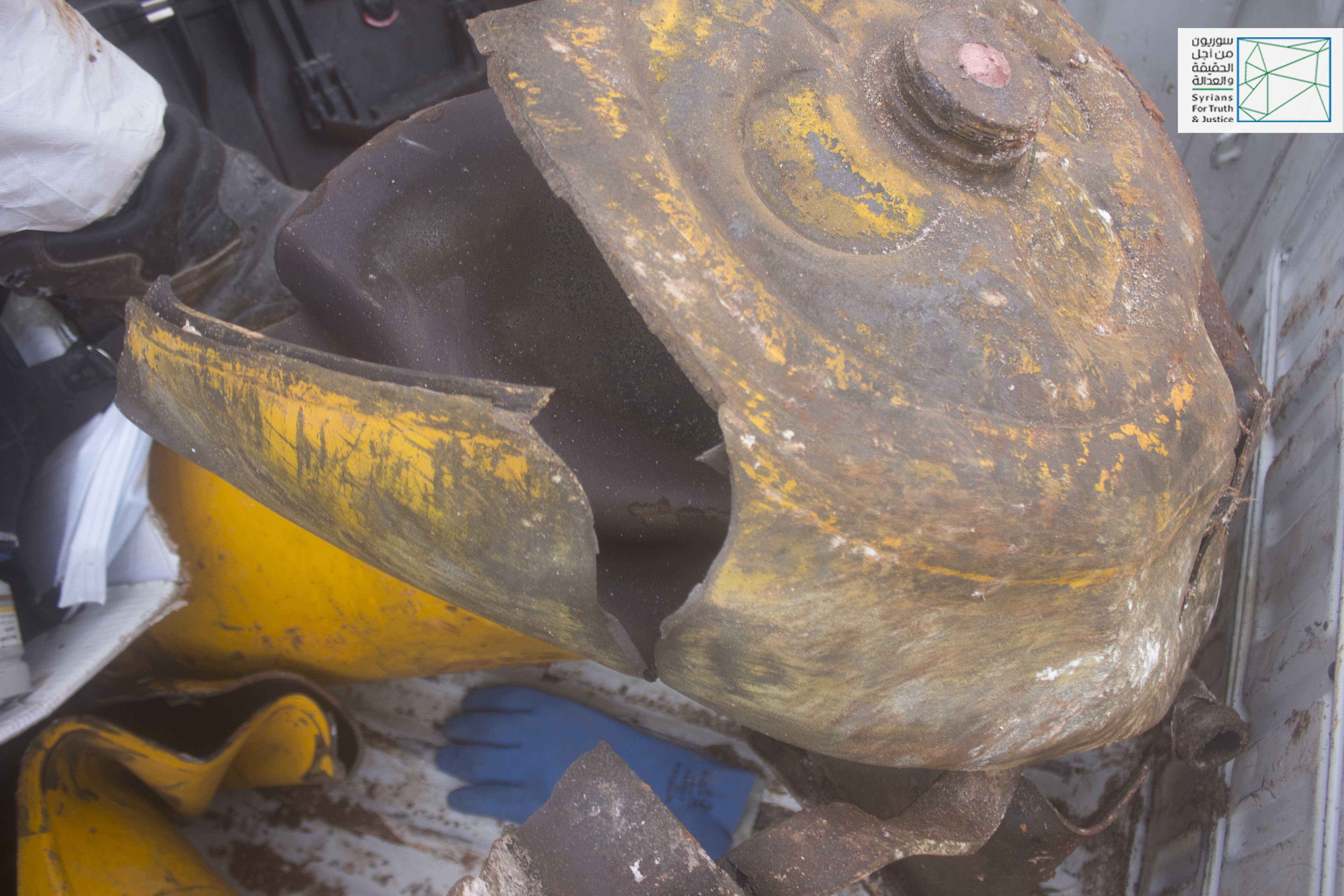 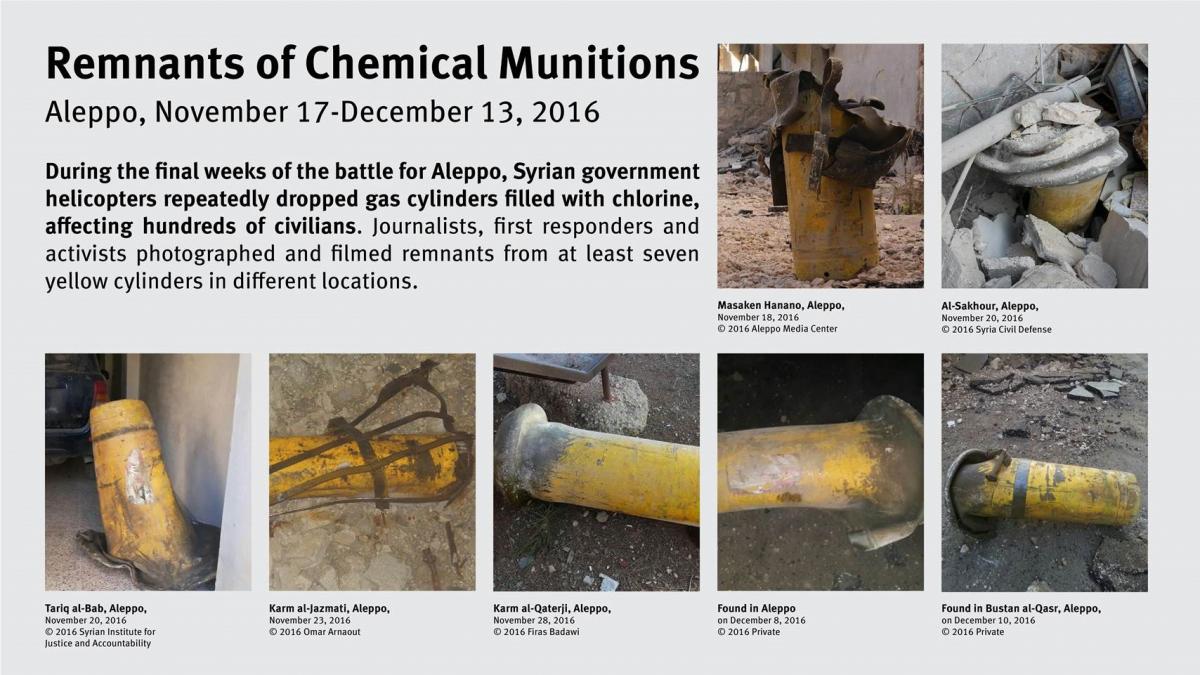 At the impact site in Saraqib, multiple pieces of metal debris were documented. These include strips of metal, and wider metal plates, some of which are attached to each other: 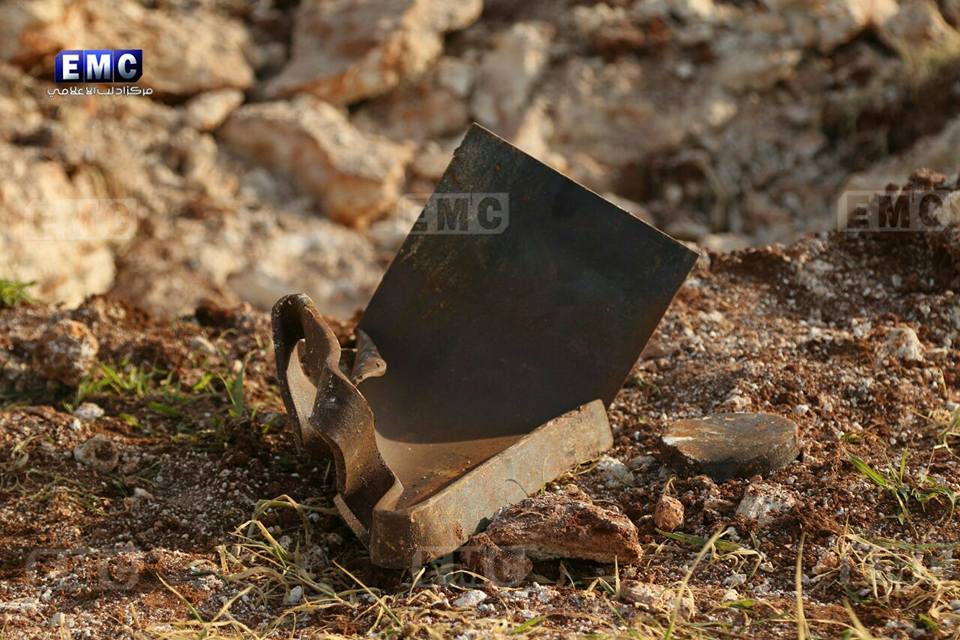 A metal strip and metal plate attached to each other photographed at the impact crater in Saraqib.
Photo credit – Edlib Media Center

These pieces of metal appear to be the remains of an external structure added to the chlorine cylinders to add tail fins and an impact fuze, earlier examples of which can be seen in the above Human Rights Watch graphic. One of the clearest examples of this is from a chlorine attack in August 2017 in Khan al-Assal, Aleppo, where a nearly fully intact example of this type of modified gas cylinder was recovered:

The Syrian-American Medical Society (SAMS) documented the arrival of 11 people with symptoms of suffocation on the evening of February 4, 2018 in Saraqib, and reporting the symptoms indicated the inhalation of poisonous gas, believed to be chlorine gas. The Society indicated that the attack has been the first of its kind in Saraqib since 2018.

The City Council of Saraqib confirmed through a statement issued on February 5, 2018, that Saraqib was subjected to a toxic gas attack by a helicopter affiliated with the Syrian regular forces that had taken off from al-Manjazrat School located in Hama countryside precisely at 9:02 pm on February 4, 2018, injuring many civilians.

[1] Liwaa Thwar Jabhat Saraqib controls Saraqib. The city has a strategic location because it is a link between the eastern, western, northern and southern countryside of Idlib, and this illustrates the desire of the Syrian regular forces to control it, in order to disintegrate Idlib province completely.

[2] This escalation comes from the Syrian regular forces after Hayat Tahrir al-Sham, al-Nusra Front, controlled Abu Dali village located in the northeast countryside of Hama province on October 9, 2017.  However, the Syrian regular forces backed by the Russian Air Force warplanes were able to restore this village, as well as several villages in the northern countryside of Hama on December 29, 2017. In addition, the regular forces and its allies had been able to advance towards the southeast countryside of Idlib and control several villages such as Atshan, al-Khwein and Sinjar, on January7, 2018, with the aim of arriving at Abu Duhur Military Airbase in the southeast countryside of Idlib.  According to STJ researchers, the military operations led the Syrian government forces and their allied militias to control the airbase on January27, 2018.