Preface: On Saturday, October 21, 2017, Army of Islam[1] could forcibly imposed its control on the Civil Registry Directorate in Duma, in the wake of entering a group of security personnel into the city's local council headquarters and the announcement  of transferring the Civil Registry from the powers of the local council to the powers of the police headquarters[2] in Damascus and its countryside, which actually follow Army of Islam.

As many sources and people of Duma have confirmed to STJ that this incident reflects the intention of the Army of Islam to increase its power, in order not to remain just in the military field, and also to limit the role of civil institutions and make them follow it in one way or another.

First: Background of the Local Council and the Civil Registry Directorate in Duma

The local council in Duma is an elected civil administrative institution with independent legal personality, as it does not follow any political mainstream, military formation or legal body; it also aims to unify the efforts of the locals to manage  its services and to ensure their citizens' needs appropriately and according to the potential. It also maintains public establishments, facilities and properties, resorts services and uses them as well.

The local council was established for the first time by Duma locals in September 2012; its staff included more than 312 employees within 8 departments, including the Civil Registry Directorate, where data and civil status events are registered on the basis of their official documents, as well as the issuance of Personal identity cards, family data, birth, death, divorce and marriage data, as well as family data concerning certificate of succession, civil registrations, voter registration cards and statistics. Moreover, it includes the following offices:

It works on documenting and issuance of official documents based on records within office authorities, as well as checking of registrations and received data, and granting the new family booklet for the first time.

It registers events of divorces, marriages, births, deaths and their ramifications, on the basis of their official documents, within the records of the department's own vital events.

3. Office of Automation and Archives

It organizes the work of the office; the staff work mechanisms and coordination among them, it also manages their affairs, it reviews and checks reports, documents and statements within the office and duly signs them.

It collects statistical information and data on the reproducing/activity of the city as well as it analyzes and issues reports about that. 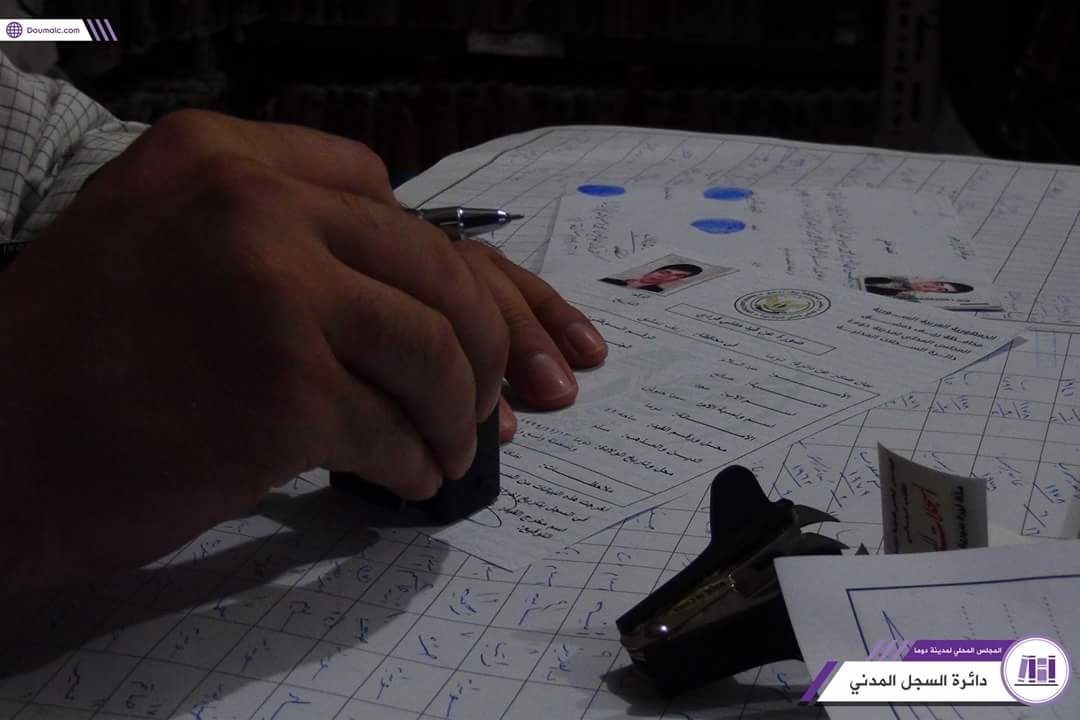 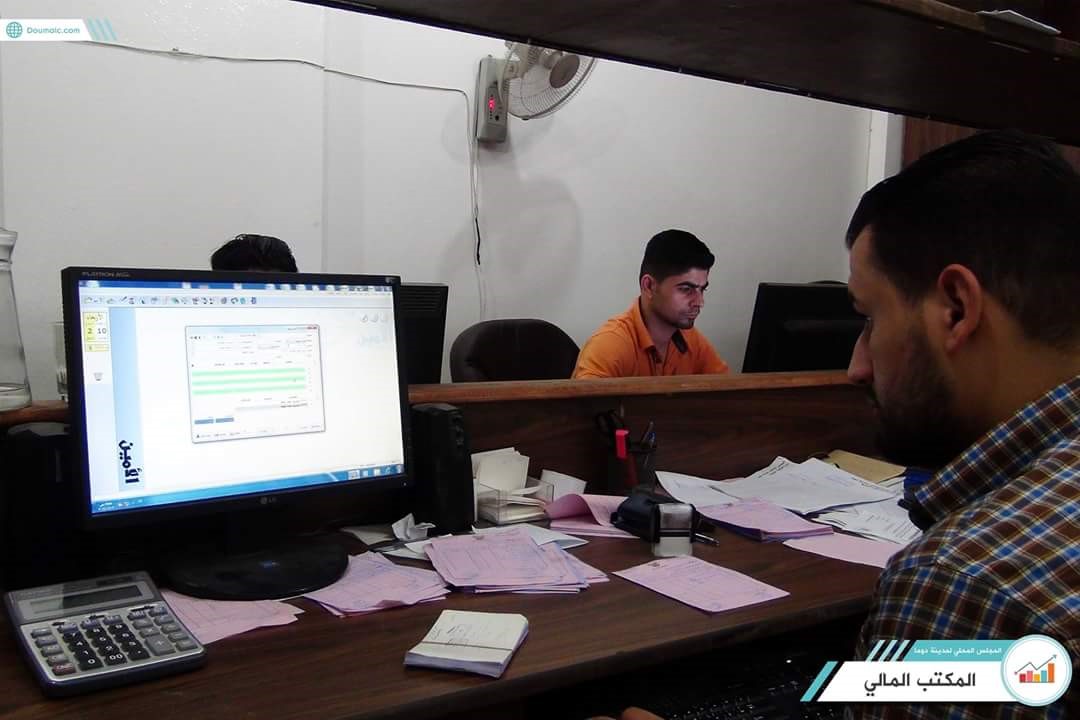 Image showing a side from the work of the local council departments in Duma, including the Civil Registry Directorate, the financial department and the legal department.
Photo credit: The Facebook page of Duma local council.

2. Details of the Incident of Seizure the Civil Registry

The negotiations lasted for two months, until a secret cooperation was detected between the Army of Islam and the local council delegate on Tuesday, October 17, 2017, in order to transfer the Civil Registry and implement the orders of Army of Islam, according to STJ reporter.

3. Angry Reactions and Announcement of the Resignation of the President of the Council and Strike of Staff

According to STJ reporter, the takeover of the Civil Register by the Army of Islam in Duma provoked angry reactions within and outside the local council, starting with the announcement of a strike by the staff of the council on Saturday, 21 October 2017, ending on Monday, 23 October 2017.  Following this strike, the president of the local council, Khalil Aybor[4], announced his resignation through his own account on Facebook, to protest against the interference of the Army of Islam in the affairs of the local council.

It is worth mentioning that the resignation of the president of the local council, following a statement published by the police headquarters in Damascus and its countryside on the social media "Facebook", it thanked the local council in general, and the president of the council in particular, for facilitating the transfer of the Directorate of Civil Status to the police headquarters.  They aimed in their proclamation to circumvent on Army of Islam tactics concerning interfering with the affairs of civil institutions.

[1] The Army of Islam: on September 2011, "Zahran Aloush", the former prisoner in Sednaya prison, announced the formation of the opposition Battalion of Islam that later became, in mid-2012, Liwa al-Islam. On September 29, 2013, the brigade merged with a number of other factions to announce the formation of the "Army of Islam" and later, in the same year, joined the "Islamic Front ", including other Islamic brigades, al-Tawhid Brigade, Suqour al-Sham, as well as Ahrar al-Sham al-Islamiyya  Movement, and Liwa al-Haqq, " Zahran has served as the commander. The army is now mainly active in the Eastern Ghouta area in Damascus countryside, but it is also located in most areas out of the control of the Syrian government except the areas under ISIS and the democratic forces of Syria/SDF.

[2] The police headquarter in Eastern Ghouta in Damascus countryside was formed in February 2015 under a unified command comprising a group of Syrian armed opposition factions like the Army of Islam and Failaq al-Rahman. However, in the wake of the military confrontations that erupted between those factions in late 2016 and early 2017, the police command was divided into two sections, the first section is "The police headquarter in Damascus and its countryside" that active in the Duma  sector (it includes cities and towns of Duma, Mesraba, Autaya, Nashabiyah and Shifuniyah) and actually follows the Army of Islam. The second section is the police headquarter in the Middle Sector (Duma, Jisreen, Zamalka and Ein Tarma) which is actually under the control of Failaq al-Rahman.

[3] Refused to disclose his name for security purposes.

[4] Born in 1989, he studied Mechanical Engineering in Damascus and joined civil activity in institutions operating in Eastern Ghouta during the control of the Syrian armed opposition factions on Ghouta and became the president of the Council in 2016.