For Unknown Reasons, Railway in the North of Raqqa City Continues to be Dismantled

The dismantling process began in September 2018 and is yet going on, while both the “Civil Council” and the “Reconstruction Committee” deny having anything to do with the matter

Machinery dismantling the railway in the north of Raqqa city. Taken on: December 18, 2018. Photo credit: STJ.

Civil crews, protected by armed elements of the Syrian Democratic Forces/SDF, continue to dismantle the railway, located in the north of the city of Raqqa, for unknown reasons. The process started in September 2018 and is yet undertaken to the date this report was written. During the period mentioned, no less than 10KM of the railway was dismantled, while in charge civil entities in the city denied their responsibility for the matter.

Between December 15, 2018 and January 8, 2019, Syrians for Truth and Justice/STJ interviewed civilians/eye witnesses concerning the issue of the dismantling of the railway, along with two officials of the “Reconstruction Committee” and the “Raqqa City Civil Council”. STJ managed to obtain the following.

In his testimony, one of the Raqqa city’s residents, refusing to reveal his name for security reasons, said:

“We observed civilian workers dismantling the railway, in parallel to the city’s northern outskirts, opposite the al-Mashlab neighborhood. They were accompanied by elements, in SDF military uniform. We saw them take parts of the dismantled steel to the old Raqqa bridge, during its renovation. But we always see big civil vehicles loading the dismantled steel and transporting it to a place that we do not know.”

Another civilian eye witness reported that the dismantling process starts at 8 a.m. and ends at 4 p.m.; he added: 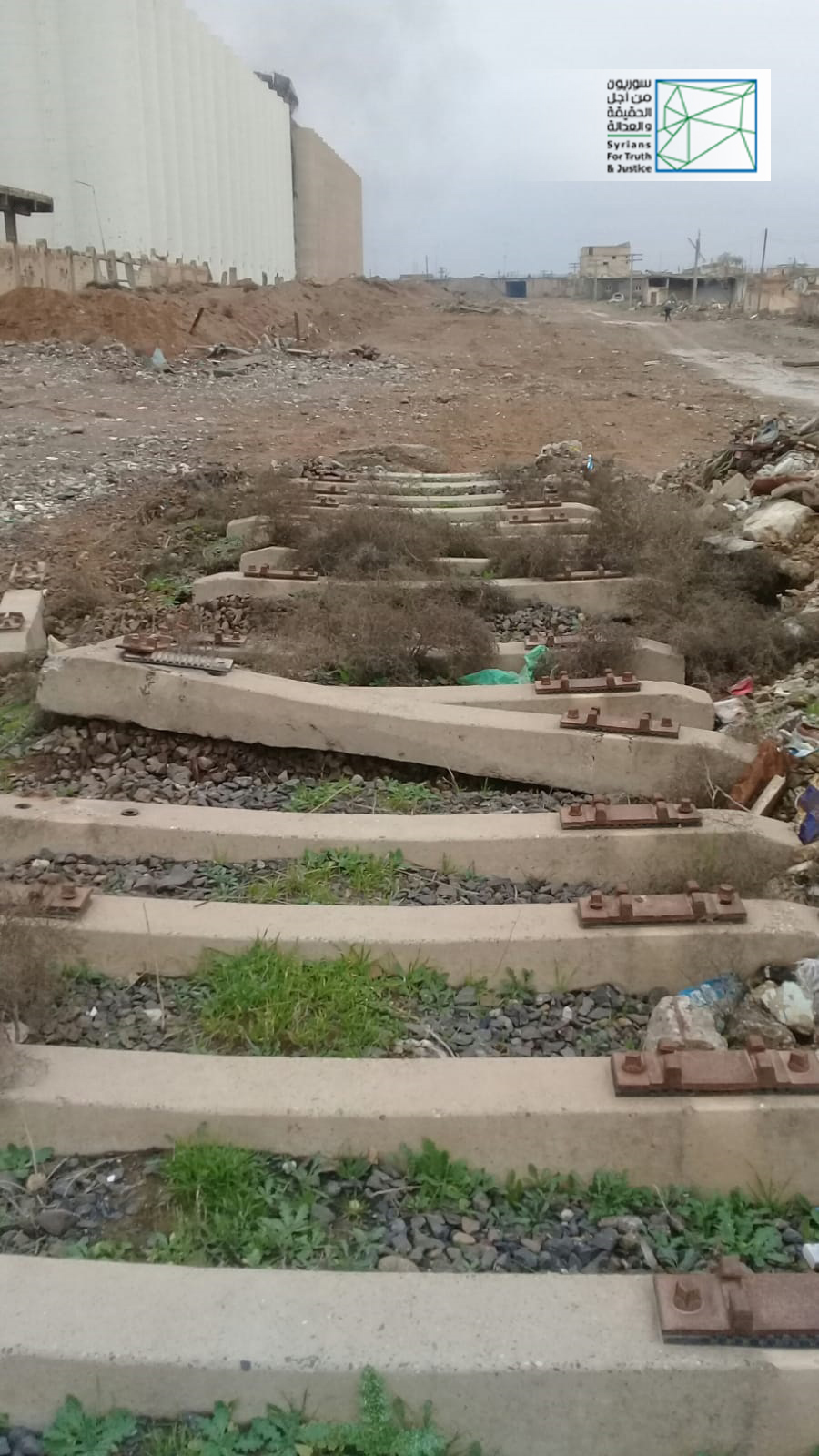 The railway dismantled, near the grain silos to the north of the Raqqa city. Taken on: November 2018.
Photo credit: STJ.

About the issue, “Aboud al-Khalaf,” the media official of the “Raqqa City Reconstruction Committee,” clarified that the reconstruction process has nothing to do with the dismantling of the railway, for there are not any projects including the current work at the railway, adding:

“Just like you, we have seen the railway being dismantled, and we identified neither the executive entity nor the reasons. We also do not know the destination, where to the steel and concrete have been taken.”

For his part, “Mustapha al-Abed,” the media official of the “Raqqa City Civil Council,” said:

“No work is, now, done by us as to dismantle the railway. We have, in a previous time, dismantled two parts of the railway, located near the two bridges of the al-Romaniya and the silos. But this was more than a year ago. Under all circumstances, any civilian that dismantles the railway or uses the public assets, the materials he/she holds in possession will be confiscated. Civilians have the right to use public assets only upon obtaining a written permit from the concerned side.”

On a related note, several local media outlets have addressed the tunnels that SDF is working to dig in a number of areas under its control, according to which, local activists in the province pointed out that SDF is using the dismantled steel to support these tunnels, similar to what Hay'at Tahrir al-Sham/HTS has done in Idlib province in 2018.