Syrian Government and Rebels Swapped Detainees under the Astana Process

The exchange deal occurred on November 24, 2018 with oversight from the Syrian Arab Red Crescent (SARC)

A side of the prisoner swap conducted between the Syrian government and the Turkish-backed armed opposition groups in northern Aleppo, on November 24, 2018. Photo credit: the Syrian Arab Red Crescent (SARC).

Introduction The Syrian regime and Turkish-backed rebel groups, notably the Levant Front al-Jabha al-Shamia, held a prisoner exchange on November 24, 2018, at Abu Zandeen border crossing, eastern Aleppo[1]. The Syrian Arab Red Crescent (SARC) supervised this swap process, which led to the release of ten from the regime’s prisons, mostly newly arrested civilians, in exchange for ten hostages; Syrian Army fighters and civilians including a woman, held by the rebels.

Although the recent swap deal was accelerated and conducted far from the media, there are promises that similar deals are on the way to be implemented during the coming period.

The swap deal was few days ahead the Astana meeting scheduled on November 28 and 29, 2018 in Astana, the capital city of Kazakhstan.

"Experts from the Astana format are looking into different options for arriving at new prisoner swap agreements between Damascus and the opposition in the next few months, in which some 50 to 60 people could be swapped," Russia's Special Presidential Envoy for the 11th International meeting on Syria, Alexander Lavrentiev said. [3]

Details of the swap

The recent prisoners swap deal between the Syrian army and the Turkish-backed opposition groups, which took place near al-Bab city, northern Aleppo, was abruptly announced. No residents or media activists witnessed the process. That was confirmed by Bakr al-Salim, an activist from northern Aleppo, who said:

"On November 24, 2018, we noticed movements in Abo al-Zendeen[4] border crossing near al-Bab. We thought that an agreement was reached to open the border crossing point between the Euphrates Shield area and the regime-held areas. But it was actually a prisoner swap agreement between the regime and the armed groups, particularly the Sultan Murad Division and the Levant Front, under the auspices of Russian-Turkish forces and the support of the SARC".

Those released by the armed opposition groups were held in the Euphrates Shield area. They were military and civilians including one woman. They are:

On the other hand, most of the prisoners released by the Syrian regular were civilians. They are:

Muhammad Nour, member of the media office of the Sultan Murad Division, said that the division wasn’t a part of this exchange deal, it only supervised it, and none of those released had been held by the group, he added.

On November 24, 2018, Anadolu Agency[5] published a video footage showing a side of the prisoners exchange process. 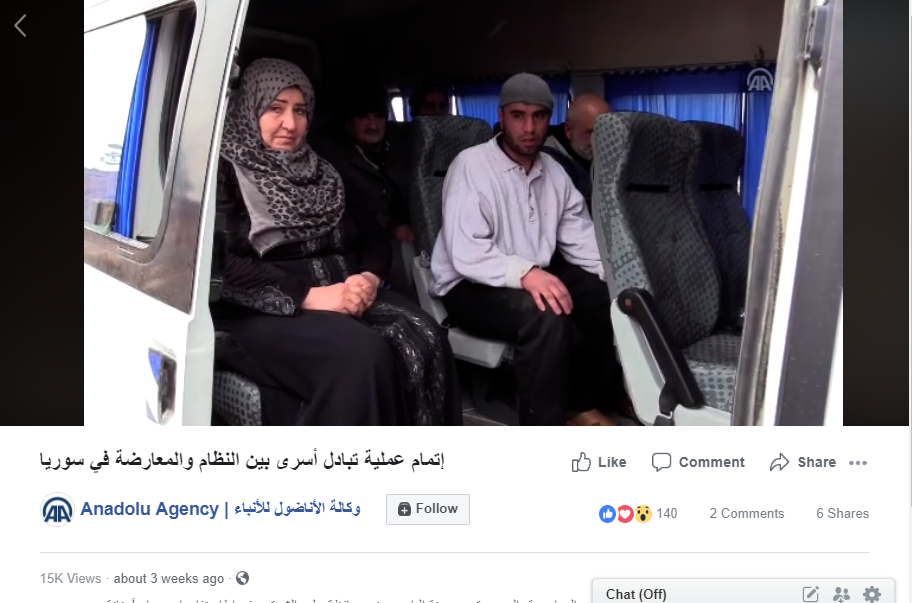 A screenshot taken from the previous footage, showing persons swapped on Nov. 24, 2018.

"The swap is an outcome of the 9th round of peace talks in Astana. It has been planned for six months, but its implementation, however, was agreed upon only recently. Most of those released by the regime are from Dara’a and were arrested not long ago. Some of them are fighters who have been deceived into reconciliation, while others are civilians who were arrested at regime-operated checkpoints, including a young man, 20, who was arrested at a checkpoint in Lattakia city." 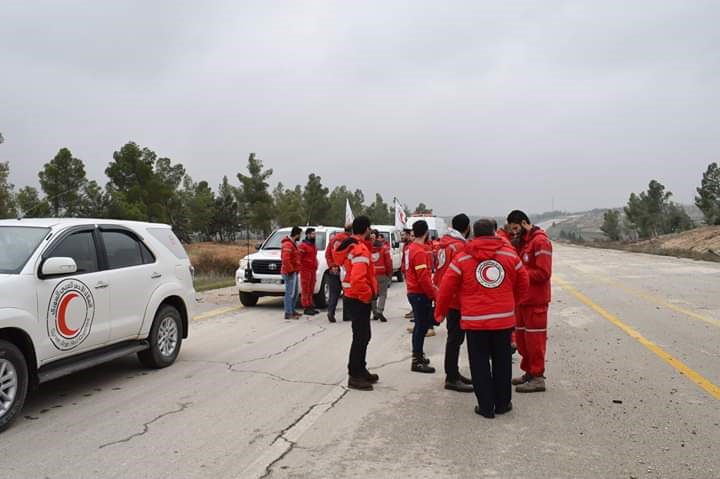 A side of the prisoner swap conducted on November 24, 2018. Photo credit: the Syrian Arab Red Crescent (SARC)

Hamza al-Baker, a commander of an armed group in the Euphrates Shield area, confirmed to STJ that the exchange deal achieved under Russian-Turkish auspices, without the intervention of UN. He said:

"The UN was supposed to supervise the deal, being an outcome of the Astana meeting, but the haste in implementing it by Turkey and Russia prevented that. The next swaps will be certainly under the auspices of the UN. The exchange noticeably improved mutual confidence between the warring sides and Astana mediators, and showed their determination to do further actions to exchange more detainees between the Syrian warring sides".

In a statement on November 24, 2018, the Turkish Foreign Ministry said the deal is "a first important step in building trust between the warring sides in Syria". 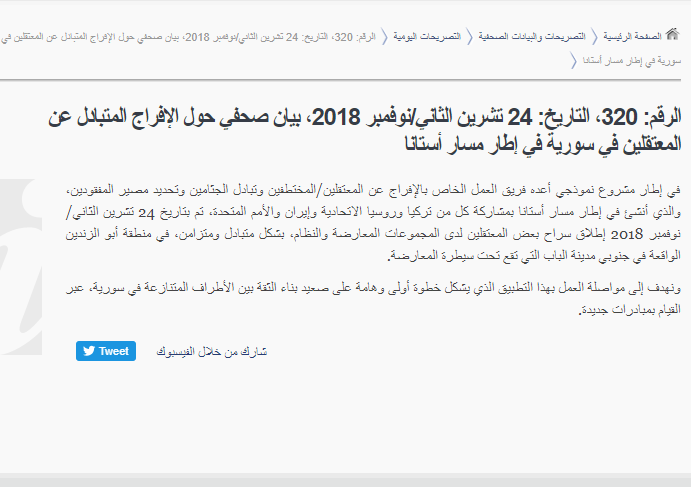 Ahmad Tu’ma, who was a representative of the opposition in Astana talks, tweeted on November 24, 2018:

The recent exchange deal is a goodwill gesture and a practical application of the ‘release of the detainees’ item within the scope of the Astana process.

Tu’ma stated that the regime released 20 prisoners, which was denied by several sources.

[1] On August 24, 2016 the Turkish-backed armed groups controlled northern Aleppo. The most prominent groups were the Sultan Murad Division, the Levant Front (Arabic Jabhat al-Shamiyah), and Hamza Division. They launched a military operation against ISIL and managed to expel it from the areas around Jarabulus, al-Rai, and al-Bab al-Shimali.

[4] Abu al-Zendeen crossing lies near al-Bab city and is a contact line between the Syrian regime-held areas and the armed groups-held areas in northern Syria.