A view of the archaeological citadel, with the Roman Theater located inside, in Bosra city in Daraa province. ©Syrians for Truth and Justice ( By: Alaa Al Faqeer)

Daraa is a province in the southwestern Syria, located north of the border with Jordan, the Syrian Qunitra Governorate from the west, Sweida Province from the east, and Damascus province from the north. Historically Daraa is part of the Houran region. Daraa’s area is about 4,000 km2. There are several archeological sites and precious monuments located in it.

Daraa, the capital of Daraa governorate, had the name Auranitis (Aramaic Hawran, cave land) in antiquities and inhabited by the Canaanites. It was mentioned in the Hebrew bible as Edrei.

Several excavations were done to the archaeological sites in Daraa city in 2002 by the Syrian Department of Antiquities, under the umbrella of National Archaeological Missions, which revealed the presence of an ancient city underneath the existing Daraa. Those findings included the remains of rooms, houses with courtyards, and corridors that might be used by cavemen during the Stone Age from the sixth millennium to the fourth millennium BC (6,000 to 4,000 BC). Daraa was first mentioned in the Amarna letters, discovered in Egypt 1882 AD., whose cuneiform tablets dated back to the fourth century BC.

In Daraa province, there is also the Al-Omari Mosque, built during the Islamic period. To the southeast of Daraa, there lies the ancient city of Bosra (Bosra al-Sham) with its Roman Theater, amphitheater, and the Roman baths which are all of great historical value. Another archaeological site is called Lajat, which is more than 1,000 km2. This site contains many buildings and citadels, such as the “Al-Masmiyah citadel,” as well a number palaces, Roman temples, towers, cemeteries, routes, ponds, and wells. These buildings create the sense of being in an integrated open-air museum. To the south of Lajat site lies “Khabab city” that also contains several archaeological sites. The most important monument there, however, is the “Khabab Cathedral” built in 900 AD.

In Izra city located in the Daraa district, there is the Greek Orthodox church of St. George built in 516 AD in the place of a former “pagan temple”. In the “Sheikh Sa’ad” town west of Daraa is “the Prophet Ayub (Job) shrine” constructed in the second millennium BC. In Nawa city, located in the west countryside of Daraa province, lie many hills with archaeological ruins that show the areas was inhabited a long time ago and provide the histories of different civilizations including the Amorite, Aramaic, Greek, Byzantine and Islamic civilizations among others.

In Daraa province, nearly twenty-five ancient mosaics have been found and spread across several cities that date back to the fifth and sixth centuries AD. Dolmen -megalithic tombs- were discovered in the archaeological sites in the Daraa governorate, indicating that man knew to bury the dead in graves even in the primitive way during the Neolithic period. In addition to all the above, the Archaeological missions of Syrian government that took place since 1966 has uncovered more than four hundred archaeological sites spread across the Daraa district that makes the regions seem to float on a sea of antiquities.

Due to the ongoing events of the Syrian revolution since 2011, which transformed into an armed conflict, the archaeological monuments and historical sites faced (and are facing) severe damage, both partial or total, in some locations. Most of this damage has been caused by the Syrian military and other parties when targeting archaeological sites with airstrikes, barrel bombs, and artillery shells that deliberately or indiscriminately hit the towns and cities without considering humans or heritage sites. This was acknowledged by Mr. Ahmad Moqdad, an activist from Bosra. As he explained to Syrians for Truth and Justice  during an interview dated January 15, 2017:

“The full destruction of Al-Kolaibeh “King’s Daughter’s Bed” was documented as well as the damage of Abi al-Fedaa school, Al-Omari Mosque, Mabrak Al-Naqa, Ftima Mosque, the Monastery of Bahira, the churches of St.George and Baccus, all of which are located in the archaeological city of Bosra, the sixth UNESCO-listed site recorded as an international archaeological sites”.

In this context, the Director-General of UNESCO “Irina Bokova” condemned the significant destruction to the historical city of Bosra as result of the ongoing war and called upon all the parties to protect its cultural heritage. (Dec/2015)

Unfortunately, the damages escalated to reach parts of the Hijaz railway stations in Wadi al-Yarmouk, Gharz and Daraa city.

In Daraa, major parts of the ancient towns and important historic buildings were also affected, as well as the Roman and Byzantine structures in several locations.

There are other reasons behind the destruction of the cultural heritage of Daraa. For instance, a consequence of the region’s insecurity, high unemployment rates, absence of job opportunities, increasing food prices, and inflation, according to locals residents, significant numbers of young people found a solution in digging around to find any artifacts that may provide them funds to support their daily needs. This was documented by Mr. Firass Mohamed, a construction worker, from Mahjjah town in January 2017 to the Syrians for Truth and Justice:

“Every day, with other young men, I go to the historic buildings at the center of the city hunting ‘small ancient objects’ hoping to find one of the precious golden-treasures buried underground. Once, we were lucky to find some objects but that were only worth 100 Syrian pounds, which is worthless compared to our significant physical efforts. However, we could afford our daily needs for a few days. The found objects are sold to interested traders. I know the most of the traders come from Damascus, but I don’t Know where exactly they go with those looted artifacts”.

Lately, many are talking about discovery of numerous archaeological objects and significant artifacts in different spots in Daraa. This means the looting archaeological sites and illicit trafficking of Syrian heritage will continue due to the absence of local or international organizations to protect them. What was found -till now-is tiny compared to what really exists in Syria, but many of these objects have traveled far away from Syria to unknown destinations, such as international museums.

In the absence of law, organizations that work on the field to protect them, and the incalculable danger for Syrian’s heritage, we, the “Syrians for Truth and Justice,” will attempt to document all attacks and theft of  the Syrian cultural heritage which is not only valuable for us, as Syrians, but also for all humankind.

Some pictures showing the Heaven Courtyard(or Al-Momathlen Square) locates to the west of the Roman Theater in Busra al-Sham-Daraa. It clearly shows part of the damages as a result of brutal barrel bombing of the Syrian Armed Forces on Western part of Bosra Citadel on Dec/22th/2015. Pictures were taken exclusively for Syrians for Truth and Justice by their field researcher Ahmad Al Yaman. 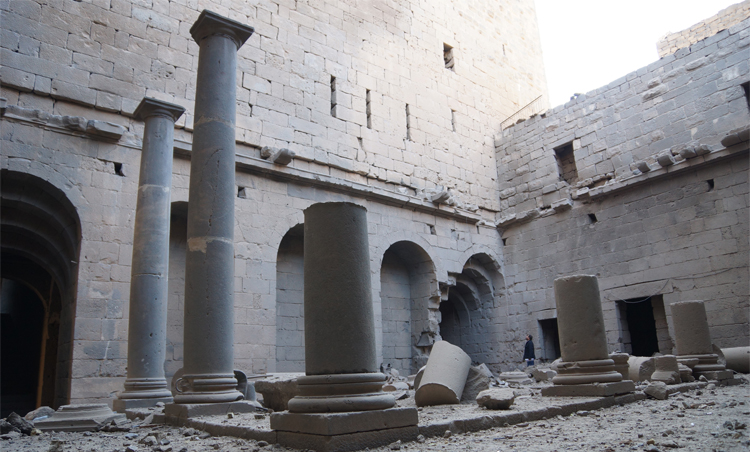 *Author: Ahmad Al Yaman, A field researcher of Syrians for Truth and Justice in Daraa district.

Killing Mother Tongues as a form of the...

Racial Discrimination in the Syrian Constitution

Russia’s and Turkey’s Recruitment of Syrian Mercenaries to...

Despite the challenges, the fight against COVID-19 in...

The United Nations in Syria, or how the...

The prospect of a peacekeeping operation in Syria

UNGA – Call for action regarding the situation...

Recommendations to the International Coalition on the Safe...