Between January and February 2022, the Turkish Border Guards deliberately shot two boys and a man, while they were present in the fields adjacent to the Turkey-Syria border wall

An image of Turkish soldiers on the Syrian borderline as the construction of the concrete wall on the border continues in the Suruc district of Sanliurfa, Turkey on September 3, 2016. Credit: Anadolu Images.

Between January and February 2022, Syrians for Truth and Justice (STJ) documented three separate targeted shootings by the Turkish Border Guards which resulted in three civilian casualties. The guards deliberately shot and killed two boys and a man in Idlib, while they were present in farmlands adjacent to the Syria-Turkey barrier. The reason for the shootings remains unknown.

The excessive and wanton use of violence is symptomatic of the Border Guards’ practices. In addition to shooting civilians within the Syrian borders, the guards assault, brutally beat, and detain Syrians captured while attempting to cross into Turkey illegally.

STJ is working on an extensive report that documents the violations perpetrated by the Turkish Border Guards, which will be available in March 2022.

“They Killed Him in Cold Blood”

On 30 January 2022, Turkish Border Guards shot and killed a teenager, Abdullah Khaled Eskeef (14). The boy and his brother were collecting crops in farmland in in Dorriyeh village, in Darkush district, near the Syria-Turkey border. The guards also opened fire on the civilians who rushed to help the wounded child, hampering efforts to save his life.

STJ reached out to the bereaved father, Khaled Eskeef. He recounted:

“On 30 January, my two young sons went to the groves adjacent to the border, near the Dorriyeh village. They went there to collect olives and apricots. The farmland is nearly 2 KM away from the border. The boys were riding a donkey. When they finished work, they set off for home at about 12: 15 P.M. (local time). On their way back, border guards started shooting at them. My son Abdullah was injured. My other son hid somewhere and tried to pull his wounded brother to a safe place. He failed because the border guards shot at him every time he reached out for his brother. He started shouting, asking for help from the locals in the area. I was working in a nearby field, so I rushed there. However, we could not pull Abdullah until half an hour later. The bullets of the border guards prevented us from reaching him, as if they wanted to make sure he was dead. We managed to take him to the al-Rahma Hospital in Darkush. But he died. The bullet entered his chest near the heart and left through the side . . . my son was struggling for life in front of my eyes, and I could not take him to the hospital.”

“They killed my son in cold blood and prevented us from taking him to the hospital . . . Since the shooting, the people have been afraid of approaching their fields near the border. They must find a solution, and the Turks must leave us be.”

STJ obtained the medical report issued by the al-Rahma Hospital in Darkush. The report confirmed that the bullet stopped Abdullah’s heart and prevented him from breathing, while all attempts at cardiopulmonary resuscitation failed. A copy of the report is attached below, tagged image 4.

Abdullah’s death by the fire of the Turkish Border Guards is not the first. STJ reached out to a local official in the Dorriyeh village, who narrated:

“Since 2021 up to 19 February 2022, we have recorded the deaths of over six persons within the Syrian territories, perpetrated by the Turkish Border Guards. The Turkish Gendarmerie (Border Guards) use live bullets and deliberately shoot people, intending to kill them.  The majority of the village’s people depend on the yield from their agricultural lands, located adjacent to the border. The Turks are targeting everyone . . . the Gendarmerie’s bullets do not spare children, women, or elderly. There must be a serious solution for this problem because the villagers are poor and the fields are their only source of income.”

“The Bullet Struck Below His Heart”

On 10 February 2022, Turkish Border Guards shot and killed a teenager, Rashid al-Rifa’i (12). The child was with his father, collecting firewood from one of the fields adjacent to the border and near the Ayn al-Bayda village, in Darkush district. The child originally hails from Bidama town and used to live with his family in the al-Anssar IDP camp, close to Ayn al-Jawz village.

STJ reached out to one of the eyewitnesses of the shooting:

“On 10 February, the child, Rashid, was with his father, collecting firewood near a camp, located somewhere close to Ayn al-Bayda village; the camp is housing people from Bidama town, almost exclusively. The two were searching for wood far enough from the Turkish border. However, there is this Turkish Gendarmerie Guard Point, which overlooks the area. The guards shot the child while he and his father were heading back to the al-Anssar camp where they live. The bullet hit below the heart and left through the other side. The child fell to the ground. The locals rushed him to the makeshift clinic immediately, which was barely 100 m away from the location where the child was shot. He died despite all the doctors’ efforts to save his life.”

“Two Bullets, One Was Lodged in His Head”

On 21 February 2022, Turkish Border Guards shot and killed the internally displaced Abdulmutaleb al-Khsarah (55). Al-Khsarah hails from al-Eiss village, in Aleppo’s southern countryside. He was targeted while working in the fields near al-Mashrafiyeh village, adjacent to Salqin town on the Syria-Turkey border.

STJ reached out to one of the residents of the al-Mashrafiyeh village, who narrated:

“In the morning, Abdulmutaleb left the village for the fields to collect firewood. At noon, the Turkish Border Guards shot him with two bullets — one was lodged in his head. He was immediately taken to the Bab al-Hawa hospital. He died in the evening.”

Image (2)- The child Rashid al-Refa’i was shot and killed by the Turkish Border Guard on 10 February 2022. Credit: Local media outlets. 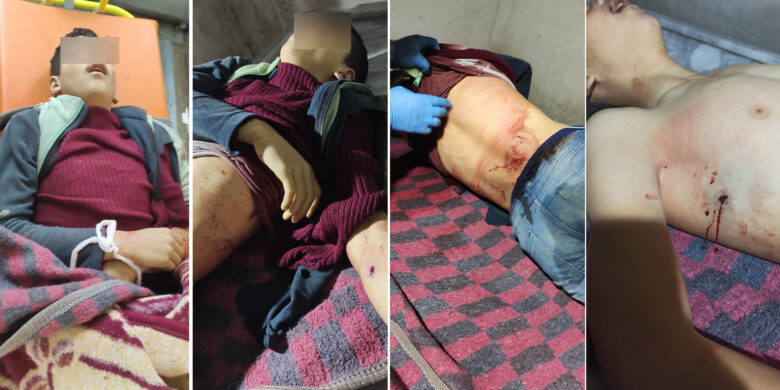 Image (3)- A number of photos of the child Abdullah Eskeef, who was shot and killed by the Turkish Border Guards on 30 January 2022. Credit: The child’s family.

Image (4)- Copy of the medical report al-Rahma Hospital issued for the family of the killed child Abdullah Eskeef.