Tall Abyad: Spot for 32 Arrests in First Three Months of 2020

The opposition-affiliated National Army and the Turkish forces arrested 32 persons on different charges— while six are released, the fate of the yet-captives continues to be unknown

The Municipality Roundabout in the city of Tall Abyad. Photo credit: STJ.

Syrians for Truth and Justice/STJ documented at least 32 raids and arrests in the district of Tall Abyad, east of Raqqa Province, where only six were released, while the 26 remaining detainees were yet suffering an unknown fate when this report was published—namely on 2 April 2020— as it covers the period between early 2020 to late March. These arrests and raids were carried out by al-Jabha al-Shamia/Levant Front armed group, operating under the opposition-affiliated Syrian National Army and personnel of the Turkish army and intelligence services.

STJ’s field researcher,  assigned monitoring the status of human rights in the areas of Operation “Peace Spring”, managed to document the raids and arrests that took place over January 2020, where the  number of detainees amounted to 13 persons, all arrested for unknown reasons. In February 2020, however, 15 people were arrested, some of them for unknown reasons, whereas others were accused of dealing with the Autonomous Administration that previously controlled the area. In March 2020, four people from the same family were arrested for the possession of materials used in the manufacture of explosives.

This report is based on a number of interviews that STJ’s field researcher conducted with a number of the detainees’ relatives and close friends, who all refused to reveal their true names for fear of prosecution. Other relatives, however, refrained from providing a testimony, due to which STJ only documented the names of the detainees and the dates of their arrests.

In this report, STJ covers the arrests carried out between February and March 2020, as it already published a detailed report on arrests over January 2020.[1] STJ has also monitored a decline in the number of arrests and raids in March, compared to the two previous months. 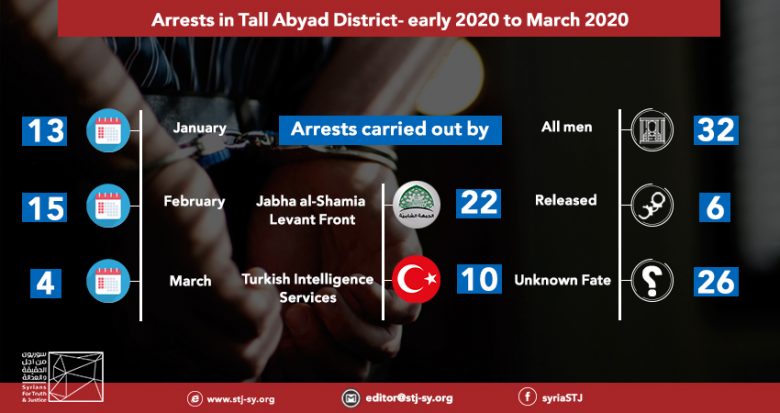 The security office / security force led by “Sheikh Juma”, affiliated with the Levant Front, embarked on an arrest raid in the district of Tall Abyad, which ended with the arrest of eight persons for unknown reasons.

On February 16, STJ’s field researcher reported, an arrest raid targeted the homes in the city of Tall Abyad, during which Abdulqadir al-Karimo, Abdullah al-Anaizan, Ahmad Rahim and Ahmad al-Karimo were arrested on the charge of being part of one of the blasts that hit the area. The four men were yet detained when this reported was being prepared.

On February 23, the same security force raided the village of Ain al-Arous, adjacent to the city of Tall Abyad, arresting Hamad Khalil al-Huwaish, Abdullah al-Shuwaish and Mohammad al-Ahmad al-Hammadi for unknown reasons. The three men were yet captive when this report was prepared.

A force of the Turkish army and intelligence services carried out two arrest raids. The first took place on February 21, when Turkish army personnel raided the houses of Rasim al-Ali and Mohammad al-Hassan in the city of Tall Abyad. In addition to arresting the two men on the charge of affiliation to the Autonomous Administration, previously in control of the area, the personnel confiscated an individual gun and five million Syrian pounds from Rasim al-Ali’s house.

The second raid, however, was conducted on February 19 in the village of Tall Abyad al-Sharqi, a neighbor of the city of Tall Abyad, arresting  Issa Mohammad al-Mousa, Mustafa al-Najjar, Falah Safrani and Khalil al-Hamudd on charges of operating within the ranks of the Syrian Democratic Forces/ SDF and working as its “sleeping cells” in the region.

In March, arrests dropped significantly, for only four persons from the same family were arrested on the charge of possessing explosive materials. The arrest raid was joint, as it was carried out by the Turkish intelligence services with the participation of fighters of the Levant Front. The arrestees were Ibrahim, Ziadan, Sulttan and Farhan, who are all members of the al-Ttamahi family.

A friend of the four arrested brothers recounted the following to STJ:

“On February 24, a patrol of the Turkish Intelligence Services and the Levant Front raided the home of the al-Ttamahi family, where they found two bags containing phosphorous. Zaidan al-Ttamihi referred to the Levant Front’s security office and informed them that the family had already reported to the National Army that the family house was used by SDF, just before the army took control of the city. Zaidan also told them that, back then, the Levant Front, accompanied by personnel of the Turkish army, examined the house, detonated the explosive devices planted in it, and bridged the tunnels dug near it. The house was then returned to the family. The materials found in March, nonetheless, are remains that the family has nothing to do with.”

The witness added: “But Mustafa al-Thibo, one of the leaders of the Front’s security office, told Zaidan that the Turkish intelligence services had examined the material they found in the family’s home and came to know that it was phosphorous that had been recently brought, not more than 15 days ago. Therefore, the four brothers were arrested.”