August 11, 2020 1k views Download as PDF This post is also available in: Arabic Font Size A A A 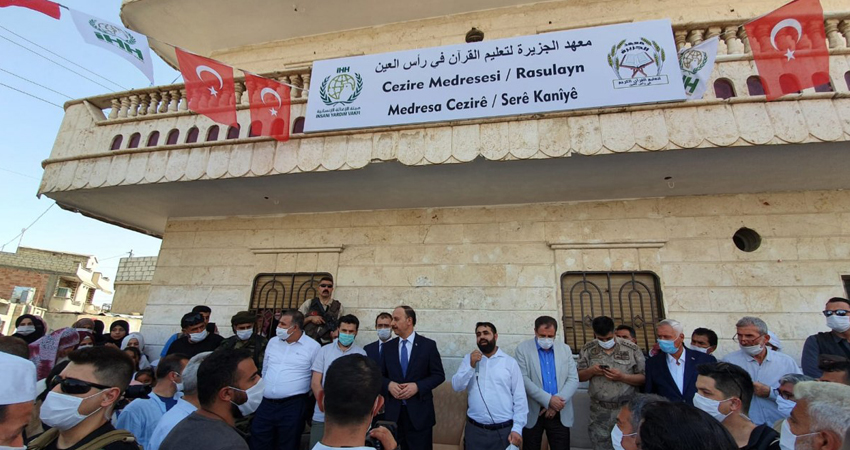 A side of the opening ceremony of two Quran institutes in the city of Ras al-Ayn/Serê Kaniyê, which took place on 23 June 2020, in the presence of Abdullah Erin, governor of Turkey’s Urfa. Credit: TR. News Agency.

The Turkish Humanitarian Relief Foundation or İHH, has turned two houses, from those seized, in the city Ras al-Ayn/Serê Kaniyê during Operation Peace Spring – waged on 9 October 2019 – into institutes for teaching Quran.[1]

Those two houses belong to the family of the Syrian Kurdish dissident journalist, Muhyedin Isso, who were forcibly displaced due to Operation Peace Spring.

On 9 October 2019, Turkish President Rajab Tayyip Erdogan announced the launch of Operation Peace Spring in northern Syria, spearheaded by Turkish forces and allied rebel groups of the National Army of the Syrian Interim Government, operating under the National Coalition for Syrian Revolutionary and Opposition Forces.[2] A day before the start of the operation, the National Coalition for Syrian Revolutionary and Opposition Forces released a statement supporting the Turkish announcement of a looming military operation in the region. The statement said: “The Coalition supports the efforts of the National Army, the Ministry of Defense and those of the Joint Chiefs of Staff. We confirm the readiness of our National Army to combat terrorism in cooperation and joint action with brothers in Turkey.”[3]

The Turkish military invasion of Northeastern Syria led to a massive wave of displacement, especially the operation’s onset. According to the United Nations/UN, on the two weeks that ensued the operation’s launch, about 180,000 people, mostly women and children,[4] were displaced, 10,000 people of whom sought refuge in Kurdistan Region of Iraq (KRI). The invasion, furthermore, ended with the Turkish Army’s control of large Syrian territories.

The two Quran institutes which were named Al-Jazeera and Al Fateh, were inaugurated with a ceremony attended by Abdullah Erin, the governor of Turkey’s Urfa, on 23 June 2020.

Images 1&2- A side of the opening ceremony of the al-Jazeera and al-Fateh Quran institutes in the city of Ras al-Ayn/Serê Kaniyê, which took place on 23 June 2020, in the presence of Abdullah Erin, governor of Turkey’s Urfa. Credit: a report published by the Press and Public Relations Directorate in the city of Urfa (Turkish: Şanlıurfa İl Basın ve Halkla İlişkiler Müdürlüğü).

Image 5- the location of the two houses in the city of Ras al-Ayn/Serê Kaniyê.

The ceremony featured the graduation of 132 students, among them 100 females, who were granted certificates of Quran memorization, which qualify them for teaching Quran. Abdullah Erin said in a speech he made at the ceremony:

“This step is part of the work to restore normal life to Ras al-Ayn/Serê Kaniyê and to end the destruction.”[5]

Image 7- Abdullah Erin giving a speech in the opening ceremony of two Quran institutes in the city of Ras al-Ayn/Serê Kaniyê. Credit: a report by Al Khabour Media Network.

Image 8- Behçet Atila, representative of the iHH in Urfa, giving a speech in the opening of the two Quran institutes in the city of Ras al-Ayn/Serê Kaniyê. Credit: a report by Al Khabour Media Network.

On 23 June 2020, the state-run Turkish news agency, Anadolu Agency, reported the event in the words:[6]

“We have started teachers training courses four months ago in the Salah al-Din al-Ayubbi and Al Jazeera institutes, with the support of iHH.”

This suggests that, houses of Isso’s family were seized at least four months before the opening of the two Quran institutes by IHH.

The Syrian Kurdish journalist, Muhyedin Isso, who based in Germany, denounced the seizure and the investment of his family’s houses without their permission, considering this act immoral and violating human rights. He told STJ that Syrian armed groups seized four houses belong to his family in the neighborhood of al-Mahattah al-Janoubi in Ras al-Ayn/Serê Kaniyê and turned two of them to institutes for teaching Quran:

“Months ago, I learned that Quran teaching courses are held in our seized house. On 23 June 2020, I saw videos circulated on social media show how a Turkish foundation, which claims the protection of human rights and freedoms, turned two neighboring houses one belongs to my father and the other to my brother, into Quran institutes called Al Jazeera and Al Fateh, without our permission or even our knowledge.”

Isso revealed the involvement of the opposition’s local council in Ras al-Ayn/Serê Kaniyê in seizing two of his family’s houses and giving them to the iHH, which turned them to Quran institutes, one for males and the other for females:

“One day after inaugurating the Quran institutes and after I talked to the media about the seizure of our houses, a member of the local council of Ras al-Ayn/Serê Kaniyê, called Issa al-Bunni, contacted my father, who displaced to Turkey following Operation Peace Spring, and asked him to sign a document stating that he voluntarily gave up the house. Issa tried to convince my father that they turned his house into a Quran institution to protect it from seizure by armed groups, but my father, however, refused to sign that document and told them to get out of his house.”

“The local council helped secure the buildings, and it was the iHH that worked to equip them and to provide logistical support.”[7]

On 17 July 2020, Muhyedin Isso provided STJ with a record of a call between him and Issa al-Bunni, in which the latter admitted seizing the houses of Isso’s family and turning them to institutes for teaching the Quran, without permission from their owners, arguing that teaching Quran in the houses is consider a good deed for their owners, and that Islam does not prevent us from doing good to others without their permission.

“We took the house from an armed group; you know, us to be in the house is better than the presence of a military force in it. We spent 2.360.000 Syrian pounds to set up and furnish it. This does not count as a seizure; we did this for your benefit and you should thank us.”

Issa al-Bunni, however, refused to evacuate the houses of Muhyedin Isso’s family, in response to the latter’s talk to the media on the issue, in which he made insults against them.

Al-Bunni required a public apology from Isso to evacuate the houses.

Isso shared with STJ the ownership documents of his family’s seized houses, which were turned to Quran institutes by the iHH. The documents show that the two houses are registered to his mother Nazema Ausi Hissou, since his father is a Kurdish from the Ajanib of al-Hasakah, who were stripped of their Syrian nationality as a result of the special census of 1962.

We hid some details of the contract out of concern for the privacy of the seller and buyer, but we will provide the relevant UN organizations and bodies with the full copy.

This is the second time the houses of Isso’s family have seized; the first was in 2012 when rebel groups entered Ras al-Ayn/Serê Kaniyê led by the Strangers of the Region of Syria/Ghuraba al-Sham brigade and Al-Nusra Front/Jabhat al-Nusra to fight Assad force, as they were seized by the latter as of 2013, when the city was taken over by the People’s Protection Units (YPG). In 2019 the houses were seized again by Turkish-backed armed groups during Operation Peace Spring.[8]

IHH introduces itself as an advisory member of the UN’s Economic and Social Council (ECOSOC) and says that it has been working since 1992 with the purpose to deliver aid to all people who are in need, who had a catastrophe, who are victims of war, natural disaster, etc. or wounded, crippled, starved, homeless and persecuted thereof, wherever they are regardless of their religion, language, race or sect and to prevent the violation of the basic human rights and freedoms of those people. IHH’s voluntary relief activities have evolved to an official organization in 1995 and spread around five continents as it established a bridge of goodwill stretching from Turkey to 123 countries.[9]

[2] Erdogan’s full tweet: “I would like to kiss the foreheads of all hero members of the Mohammadan Army, participating in “Operation Peace spring”, and I wish success to them and all the local supportive elements that stand side by side with Turkey in this operation, God bless you and was in your help”, Erdogan’s official Twitter account, October 9, 2019, (last visit: 10 August 2020). https://twitter.com/rterdogan_ar/status/1181927322271830016?s=20

[8] “Ras al-Ayn: The Conflict over the “Gate to Syrian Jazira” on its Seventh Anniversary”, STJ, 7 November 2019, https://stj-sy.org/en/ras-al-ayen-the-conflict-over-the-gate-to-syrian-jazira-on-its-seventh-anniversary/ (last visit: 27 July 2020).

Afrin: Seizing Real Estate Property After Operation Olive Branch and Operation Peace Spring - Syrians for Truth and Justice May 26, 2021 - 7:03 am