On World Health Day: the response to the Corona pandemic must not be politicized

After nine years of politicizing and weaponizing health and health services in Syria, the response to the Corona pandemic must not be politicized nor used to overlook crimes committed in Syria 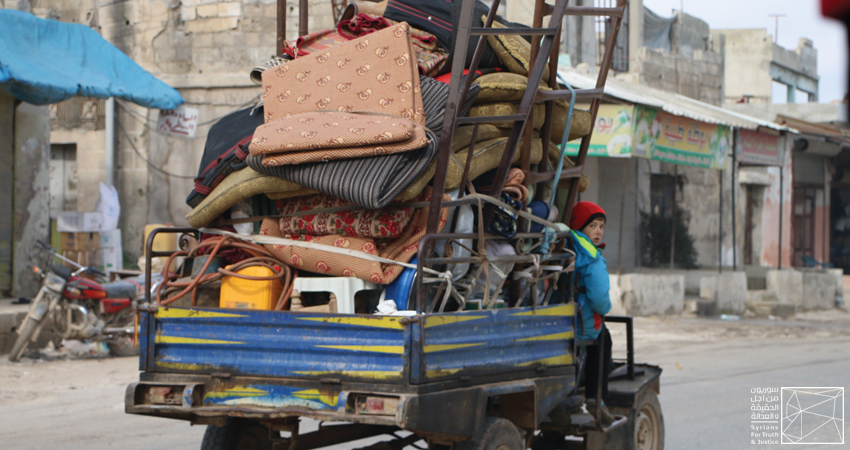 A child with his family fleeing the Russian-backed Syrian offensive in Zawiya Mountain/Jabal Zawiya towards the Turkey-Syria borders, Jan. 27, 2020. ©Syrians for Truth and Justice-STJ

Since 2011 more than 180 health workers were killed under torture in the detention centers of the Syrian government, in addition to over 500 attacks on health facilities in Syria, more than 90% of them by the forces of the Syrian government, its allies and militias. These acts are war crimes committed systematically in violation of all international laws, regulations and UN Security Council (UNSC) resolutions, while resolution No 2286 (2016) failed to put an end to these attacks or provide any kind of protection to health workers.

In addition, whole communities were systematically deprived from the right of health within the sieges imposed by the Syrian government in several areas for many years in which the Syrian government used the right to access health services as a means of pressure on both communities and individuals; as well as prohibiting medical equipment from reaching besieged cities and towns including cesarean operation kits, infant medicines, and even delaying delivery of vaccines to many regions. This continues today with other stakeholders using access to basic needs and services as political bargaining chips. UNSC de-authorized use of Alyarobieh crossing point for aid delivery due to veto threats by Russia, depriving 2 million people in northeast Syria from getting cross border medical aid, and leaving them at the mercy of the Syrian government – which obstructed medical aid for years – as their only means of accessing supplies. Furthermore, water, electricity and other basic needs have been weaponized. The Turkish authorities have failed to provide adequate water supplies due to several interruptions to operations at Allouk water station, which provides water to almost 460,000 people in northeast Syria, which cannot be allowed, especially given the growing need for water to tackle the corona pandemic.

The Syrian government has a long record of depriving detainees, particularly opinion and political detainees, from the rights of minimum health conditions in the detention centers. Many reports issued by rights groups have documented the practice of torture in many military health centers. Furthermore detainees and their relatives have been deprived of accessing their medical records, while many death cases in detention centers were attributed to “health problems” without sharing any medical records with the families of the victims. These procedures culminated in preventing UN bodies and the ICRC teams from visiting detention centers to monitor the health conditions of the detainees.

Today, on the 70th Annual World Health Day, which also coincides with the anniversary of the establishment of the World Health Organization (WHO), which this year is dedicated to thanking the nurses and midwives who, today, stand bravely in the face of the Corona pandemic. Thanking them in Syria should be embodied in protecting them from any politicization of their actions in response to this pandemic, and from any political intervention to overlook the crimes committed against them, or the rights of over 900 of their colleagues who have lost their lives at duty.

The organizations signing this statement have real fears that the humanitarian health response to Corona pandemic may be exploited politically in a way that ignores the crimes committed by the Syrian government, its allies and all the other parties to the conflict over many years, particularly the crimes related to health issues. The absence of statistical transparency by the Syrian government on Coronavirus cases is very clear. The irresponsible conduct of the Syrian government in facing the pandemic, in addition to the long history of the Syrian security services’ involvement in the medical humanitarian response increase fears the response being politicized, either through discriminating between Syrians according to the party in control of their region of residence, or by exploiting the pandemic to distort the long record of crimes and violations against the right to health. The real obstacle to responding meaningfully to the corona pandemic is these practices by the Syrian government, as well as other actors in Syria, and nothing else. Therefore, we demand that:

11 Years Since the Syrian Uprising