Northwest Syria: Illicit Excavations of Antiquities in an Ancient Synagogue

Satellite images show excavations in the city of Tadef in the countryside of Aleppo, with sources confirming the extraction of ancient coins for the purpose of trading 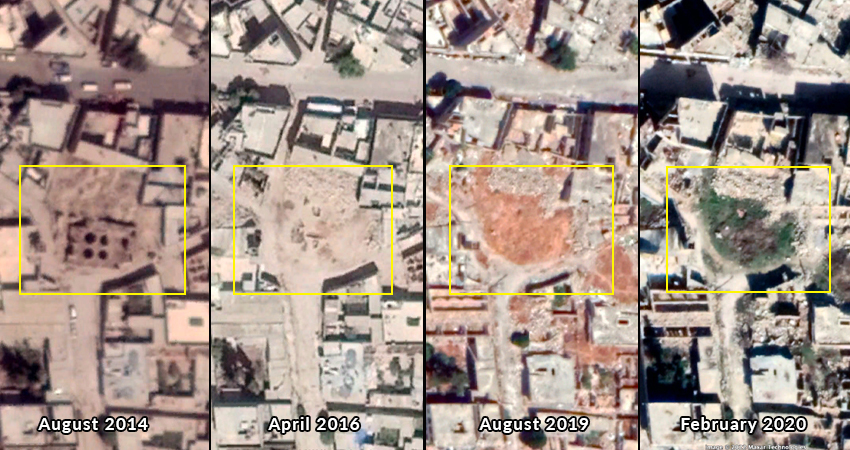 Satellite images show excavations in the vicinity of the Ancient Jewish synagogue located in the city of Tadef, the countryside of Aleppo.

According to monitoring and documentation work carried out by  Syrians for Truth and Justice (STJ), illegal excavations for antiquities started in the city of Tadef (in the eastern countryside of Aleppo governorate) in late 2021 and continued until June 2022. The excavation site is controlled by both the Syrian government forces (the 4th Division) and the opposition’s Syrian National Army SNA (Al-Hamza/al-Hamzat Division of the Syrian Liberation Front). 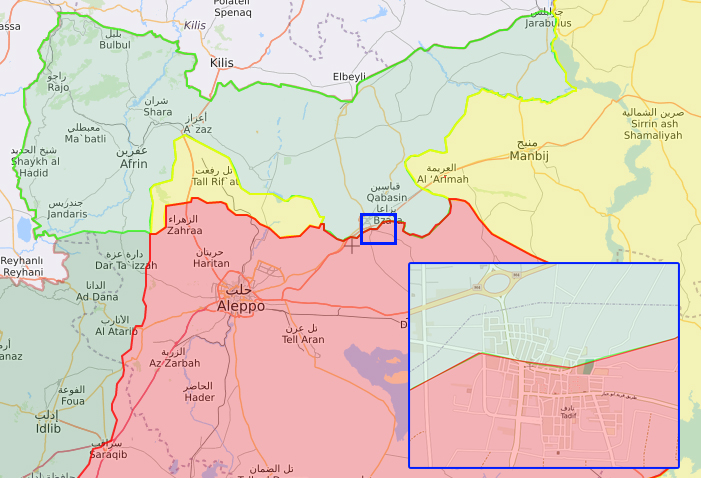 According to testimonies collected and cross checked by STJ, the two parties that control the area carried out the archaeological excavations. STJ sources talked about a cooperation between the parties, which may explain why the workers were not targeted. Furthermore, STJ documented that a member of the National Defense Militia of the 4th Division has been excavating and smuggling antiques, in coordination with two leaders of the Al-Hamza/al-Hamzat Division who belong to the “al-Najjar” family. Both groups are largely responsible for the excavations being done in the area.

According to several months of monitoring the area, testimonies, and other evidence, STJ’s experts have determined that  the excavations for antiquities took place mainly in the vicinity of the ancient Jewish synagogue in Tadef, which was controlled by the Islamic State of Iraq and the Levant (ISIS) from the beginning of 2014 until February 2017. Later, the city was divided between the Syrian government forces and the SNA. At the time of preparing this report, the city is still a line of contact between the two parties, and civilian residents are not allowed to return.

An Overview of the Ancient Synagogue

The synagogue is called the Ezra Synagogue or the Ezra Shrine because Ezra the Scribe has stopped there on his way to Jerusalem to write the scriptures. The synagogue was discovered by Max Freiherr von Oppenheim in 1899.[1]

In their mapping of endangered heritage, the Foundation for Jewish Heritage has stated that the shrine of Ezra in Tadef is in a very bad state. Their reports note that the shrine appeared to have been a place of pilgrimage since at least the late 14th century. It was restored in the 1830s by the forces of Muḥammed Ali. It was saved from destruction at the time of the anti-Zionist pogrom in 1947 by a local Arab resident. Despite this effort in 1947, the shrine has since been neglected[2].

Moreover, the Jewish News of Northern California, Volume 130, Number 36, published on 05 September 1980, states that “The committee for the Rescue of Syrian Jewry said it has received reports from Syria that the 2350-year-old synagogue of Ezra the Scribe in Tadef near Aleppo has been taken over by unidentified individuals who are using it and the adjacent shrine as animal stables. The Jewish cemetery in Tadef has also been taken over by the same individuals who are using it as a pasture for animals”.[3]

Satellite images that were taken in 2015, during the period of ISIS control of the city, indicate that the synagogue was catastrophically damaged. Moreover, other satellite images of 2019 show signs of excavations and the further destruction of the synagogue.

Excavations Carried out by the Al-Hamza/al-Hamzat Division

According to the testimonies obtained by STJ, members of the Al-Hamza Division carried out excavations near the site of the Jewish Synagogue, in addition to at least three different sites inside the city, and another one in the village of Al-Kraizat, which is also under the control of the opposition factions. STJ’s source stated:

“Excavations are carried out by members of the al-Hamzat Division and the Tajammu Ahrar al-Sharqiya, because there are several areas where both factions are stationed. The leader of the operation is a leader in the al-Hamzat Division called (al-Najjar). Excavations are carried out with primitive tools. The work usually starts at 2:00 am and continues until dawn”.

“Several ancient coins from the previous Jewish population were found. As far as I know, they were sold and taken out to Turkey. Sometimes they were sold to people of the regime because Turkey is attempting to tighten its grip on antiquities dealers”.

STJ spoke in September 2022 with a leader in the Military Police who confirmed the excavations mentioned by the previous source and assured that the Turkish authorities had confiscated some of the archaeological coins that were found in Tadef, when they were offered for sale in Urfa.

Regarding the excavations in the vicinity of the Jewish Synagogue, the source said in his testimony:

“The Military Police in the city of al-Bab received several reports of suspicious movement near the points of contact with the Syrian regime in Tadef. At first, we thought it was related to the smuggling illegal goods. So, we decided to visit the site and we found a al-Hamzat Division checkpoint. The group at the checkpoint prevented us from passing because of fortification work. However, we monitored the area and noticed excavations instead of fortification. The monitoring also showed the presence of several cars that belonged to the Syrian regime entering and leaving a certain area. We learned later that the excavations had ended and ancient coins were found and transferred outside the site”.

“Digging and excavation in the vicinity of the synagogue stopped after the Turkish statement on the new military operation. At that time, one of the Turkish officers told us that they confiscated many ancient coins that were possessed by some merchants in Urfa. The coins were samples displayed to promote other antiques that were found here in Tadef”.

“We were not able to confirm whether the confiscated coins belong to the al-Hamzat Division or the Syrian regime, because both parties use the same methods of selling and promotion. However, we are sure the coins were extracted from Tadef”.

Excavations Carried out by the Forces of the Syrian Government

STJ spoke to a member of the SNA who confirmed that the Syrian government forces began excavating antiquities in Tadef by the end of 2021. According to the source, members of the National Defense Militia, some of whom are from the neighboring village of Abu Taltal, have excavated antiquities at several points along the line of contact between government forces and the SNA. The SNA monitoredexcavations by using thermal endoscopes and identified some names by intercepting radio transmitters and listening to conversations. The source told STJ:

“We noticed the movements of the regime forces on the direct contact lines. They were digging at night using primitive tools. We knew they found some ancient coins, so when we saw that they started digging for antiquities, we did too”.

Read the report in PDF