A video published in 2021 by a former subfaction shows the killing of the AANES ambulance driver in the town of Suluk, while offering clues to the reported field executions of two others that day

Written by Alexander McKeever in collaboration with Syrians for Truth & Justice

On October 13th, 2019, Syrian National Army (SNA) faction Tajammu‘ Ahrar al-Sharqiyah announced that they had captured the town of Suluk, located in the northern al-Raqqa countryside. This occurred within the context of ‘Operation Peace Spring,’ in which the Turkish Army and its SNA proxies invaded portions of northeast Syria controlled by the Syrian Democratic Forces (SDF), taking over a strip of land stretching 100km along the border and 30km to the south.

Infamously, on the morning of October 12th, Ahrar al-Sharqiyah briefly took control of a checkpoint along the M4 highway where its fighters murdered Kurdish politician Hevrin Khalaf and several others, before withdrawing to the north. As will be addressed in the next post, the footage from Operation Peace Spring (starting at 6:50) begins approximately ten and a half hours after the murders on the M4, 13.5km to the northwest. This piece primarily covers the section of video from 19:00 to 23:30, in the moments after Ahrar al-Sharqiyah entered the town of Suluk. 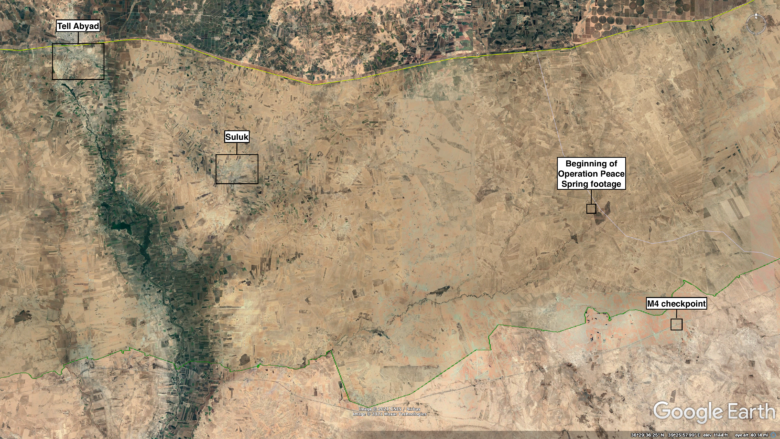 It should be stated that the timestamp seen at the bottom right of the video is inaccurate; the date is over three years behind, while the time is twelve hours behind. I will refer to the fighters seen in the video as members of Liwa‘ al-Qadisiyah as the group’s emblem is the only one seen on flags on October 13th, however it’s likely that some individuals visible were affiliated with other Ahrar al-Sharqiyah subfactions.

On October 13, 2019, reports circulated of three individuals executed by Ahrar al-Sharqiyah fighters following the capture of the town of Suluk. Confirmed information regarding these cases was scarce, due to limited eyewitness testimony and a meager amount of visual evidence available. A Syrians for Truth & Justice (STJ) investigation published in February 2020 provided more clarity to this case, though the specifics have remained inconclusive ever since.

STJ identified the victims as: Medea Khalil Issa (18), a medical staff employee of the AANES Health Authority at the Tell Abyad Military Hospital and part-time KRC volunteer, Muhammed Bouzan (18), who worked for the Tell Abyad Military Hospital as a CCTV technician transferred to the position of ambulance driver at the beginning of the Turkish invasion, and Hevi Khalil, an SDF fighter deployed as an ambulance escort.

The limited eyewitness testimony collected by STJ points to Medea Khalil Issa having taken refuge in a hospital located in the center of Suluk. Here she was discovered by Ahrar al-Sharqiyah fighters who reportedly executed Medea despite her identifying herself as a nurse. The two witnesses interviewed did not have information on the circumstances in which Muhammed Bouzan and Hevi Khalil were killed, only having seen their corpses afterwards. Testimony given by family members of Muhammed Bouzan and Medea Khalil Issa show that they received little information apart from rumors with regards to how their relatives were killed. The only visual evidence available from the scene of these reported crimes was a picture of Muhammed Bouzan’s dead body, leaked from a private message, with boots of a combatant visible in the background. Muhammed’s brother confirmed his identity to STJ.

The Liwa’ al-Qadisiyah video presents definitive evidence as to how ambulance driver Muhammed Bouzan was killed. Unfortunately, with regards to Medea Khalil Issa and Hevi Khalil, this video offers possible clues as to where and when they were killed but ultimately nothing conclusive.