Including activists and relief staffers, nine civilians were arrested by Hayat Tahrir al-Sham/HTS and Hurras ad-Din/Guardians of Religion Organization between January and late March 2020 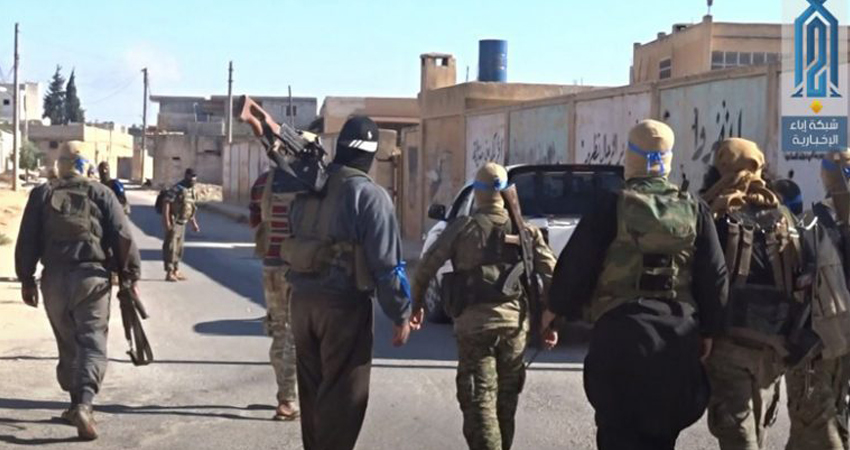 Between January and late March 2020, the province of Idlib, controlled by Hayat Tahrir al-Sham/HTS and other Islamist armed groups, has been a stage to nine arrests at least, which aimed at civilians, activists and relief staffers, backed by group arrest raids that sought persons accused of robberies and other crimes.

The field researchers of Syrians for Truth and Justice/STJ have recorded the arrests carried out by the Hurras ad-Din/Guardians of Religion Organization/GRO and the security service of the HTS-affiliated Salvation Government. They also contacted a number of the detainees’ relatives and friends, who reported that five of the arrestees were released, while the fate of the remaining four was yet unknown when this report was being composed, namely on April 10, 2020.

1. Arrests carried out by Guardians of Religion Organization:

In February 2020, the Guardians of Religion Organization/GRO arrested two activists, one active in the field of media and another operating as a relief staffer, in the province of Idlib for reasons unknown while their fate was still unknown when the report was being composed.

On February 7, 2020, the GRO arrested the media activist/photographer Mohammad Rashid al-Abdallah from his workplace, a shop in the village of Kafr Dariyan, from where he was led to an unidentified destination. STJ’s field researcher, for his part, attempted to contact the activist’s family; the latter, however, refused to provide further information on the incident fearing security prosecution.

On February 24, 2020, the GRO had also arrested the relief activist Khalid Mdalaleh, the director of the Sham al-Khair al-Insania / Humanitarian Sham Charity Organization’s Office in Idlib. Commenting on the incident, one of the detained activist’s friends recounted the following to STJ’s field researcher:

“It has been a while since we knew that he was being monitored and tracked by the GRO. When we attempted to ask the GRO for his whereabouts, they answered that he was being interrogated on security-related issues and that the interrogation is to end soon.”

The GRO is a Qaeda-affiliated extremist Islamist armed group. The group was founded in February 2018 after its fighters dissented from HTS. It is led by Khalid Āl Arouri and Abu Humam Āl Shami, and it operates in the province of Idlib, fighting against the Syrian regular forces.

2. Arrests carried out by HTS/Salvation Government:

In January 2020, security forces of the Salvation Government, the associate of HTS, arrested three persons in Idlib. The arrests were carried out as thus:

In February 2020, STJ’s field researcher documented the security forces’ arrest of four relief activists on various charges. The researcher had also communicated with a number of the detainees’ friends, who provided further details on the reported incident.

“Ahmad and Mohammad brock the locks of several schools in the town to shelter the displaced persons who sought refuge in the town escaping the latest military campaign against southern rural Idlib. Due to this, they were both ordered to refer to the town’s police station. Dodging the order, they were arrested, which triggered several of the townspeople to protest in front of the police station, demanding the release of the two men, who were actually let out the next day.”

“The reason why HTS had arrested Ahmad and Ttrad is that they have both opposed a decision of HTS, which provided for the confiscation of uninhabited homes in the town of Salqin and housing the families of its fighters in them. The two young men organized a protest to challenge the decision, after which the office, where they worked, was raided. They were arrested, beaten and referred to a court under the Salvation Government, where they were charged with espionage in the interest of the Syrian regime. The town elders, nonetheless, interfered, and they were thus released the next day.”

In March 2020, the security forces of the Salvation Government have embarked on arrest and detention raids, targeting no less than 30 persons, whom they accused of robberies or participating in motorcycles thefts in the cities of Idlib, Salqin, Harem and Ma’arrat Misrin.

The arrestees were transported to prisons of the Salvation Government, located in the two cities of Harem and Sarmada, where they were detained and interrogated for about 15 days, to be then transferred to a court, where they were sentenced to prison.

[1] Hizb ut-Tahrir is a political bloc founded in Jerusalem in Palestine in 1953. In Syria, it operates in the province of Idlib particularly, conducting activities limited to demonstrations, distributing leaflets, and drawing graffiti calling for the establishment of an Islamic caliphate, as reported on the its official website. http://www.tahrir-syria.info/activities-and-events/activities-syria.html.