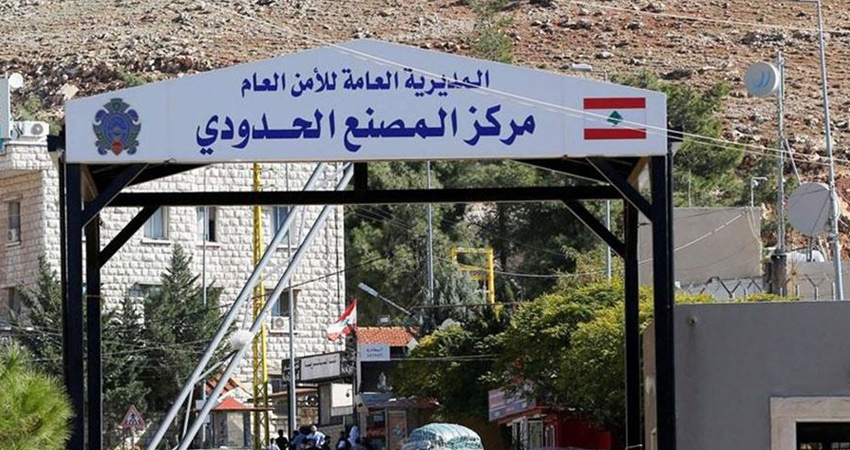 The Masnaa border crossing between Lebanon and Syria. Credit: LD.

Given their poor living conditions, which have worsened by the deteriorating economic conditions resulting from the latest protests and coronavirus crises, many Syrian refugees in Lebanon gather at the Masnaa point-from the Lebanese side- on 14 April 2020 in an attempt to pressure the Syrian authorities to allow them to return to Syria.

The crossings closure decision has also contributed to increased activity in the smuggling routes between the two countries, which usually taken by Syrians whose legal status don’t allow them to pass through the official crossings or those who can’t afford fines imposed on them by the Lebanese authorities for failing to renew their annual residence or not having it at all.

STJ monitored the arrest/detention of no less than 16 people-in the province of Hama alone-, who have returned from Lebanon through illegal routes between January and late March 2020. They were initially held in a quarantine center and later taken to Damascus by agents of the criminal security and military security to be brought before the Anti-Terrorism Court.

Mayors (mukhtars) and popular committees in Hama have received circulars from the criminal security and military security branches, stipulating that those who returned from Lebanon through illegal (smuggling) routes must be reported.

STJ also followed up the case of people who were stranded at the Masnaa- Jdaidit Yabws border point. We observed that some of them were taken to quarantine centers on 18 April 2020, while the remaining are still stranded at borders waiting to be allowed to enter Syria.

For this report, STJ met people who were among those stranded on the Syrian-Lebanese border and also talked to some of those who were arrested after their return from Lebanon illegally (through smuggling routes).

1. The Arrest of people returned illegally from Lebanon, in Hama:

The criminal security and military security arrested 16 young men who had entered Syria illegally from Lebanon. Agents who made the arrests told the families of some those arrested that entering the country illegally was not the only reason for their arrest, but also contacting smugglers who are wanted for security branches. Some of those arrested were transferred to the Anti-Terrorism Court in Damascus, while others were released after they bribed personnel at the criminal security branch in Hama.

STJ met Fatima, who is the mother of one of those arrested in Hama, in late March, she shared details on the arrest incident saying:

Ammar al-Jura’tly, from al-Ameriya neighborhood in Hama, told STJ that a patrol from the police station in Alhamidia district, came to their home and told his brother to go to the station they belong to be questioned for his returning to Syria from Lebanon through smuggling routes in February, he recited:

“Upon receiving the summons, my brother went to Alhamidia police station, where he underwent a questioning. Then he was transferred to the criminal security branch, and there he was also investigated, mainly on how he got into the country illegally and who helped him in that. Then he was told that he would be brought before the Anti-Terrorism Court for charges of illegal entry to Syria, and the judge in charge would determine his punishment and the fine he would pay. However, I asked them why they had transferred him to the Anti-Terrorism Court and not to the Criminal Court; they replied that that was because the smuggler who helped him to enter the country illegally, is wanted for terrorist acts, and thus my brother is deemed to be complicit, citing phone calls made between the two.”

2. Syrians stranded at the Syrian-Lebanese borders:

On 14 April 2020, some 100 people, including women and children, gathered at the Jdaidit Yabws-Masnaa border crossing, aiming to press the Syrian government to allow them to cross back to Syria. However, the officer in charge told them to get away from the border strip, which prompted them to try to get through an unofficial side road near the village of Jdaidit Yabws, but they couldn’t proceed because they were directly shot by the Syrian border guards.

A witness confirmed that the crossings’ closure decision is applied only to civilian traffic, as Hezbollah members are still allowed to enter and exit Syria anytime.

Ahmed Al-Rifai, one those who were stuck at the borders, talked to STJ saying:

“A Syrian police patrol came and took sums between 2000 and 5000 Syrian Pounds from each person. The officer of the patrol said that he would come back later to tell us when we would be allowed to cross to Syria, but he never did. There were about 20 women and 15 children among us.”

On 18 April 2020, the Syrian government sent three buses to carry the people stranded at borders to Syria. STJ met an individual who was among those people and now in an isolation center, he said:

“They registered all our personal data before we got on the buses, including our phone numbers and precise addresses in Syria. Then they asked us to sign a pledge to not to leave the quarantine center before being investigated. They also made a list of the names of 25 people from us, who had entered Lebanon illegally, and said that those would be tried following the completion of the isolation period.”

STJ also met an individual from Syria’s Hama, who is still stranded at the borders on the Lebanese side, he detailed:

“I left Syria to Lebanon legally in 2014, but it’s become impossible for me to survive here because I’ve lost my job. So, I decided to return to Syria, and since the crossings are closed, I have no choice but to take an illegal route there. However, I’ve tried three times already with other people to get in that route, but every time, we withdrew due to Syrian border guards’ bullets; I’m still waiting with others for a chance to proceed.”

Smuggling from Lebanon to Syria, with the help of a Syrian smuggler, costing upwards of 100.000 or 500.000 Syrian Pounds per person. Knowing that people rarely succeeded in accessing into Syria through this route, because they are often shot by the Syrian border guards.

On 21 April 2020, the LBC Lebanese TV station aired a video report saying that about 250 Syrian refugees, including women and children, were stranded on the Masnaa-Jdaidit Yabws border crossing, and still waiting-in the open- for the Syrian authorities to allow them to cross into Syria.

STJ field researcher talked to a relative of one of those stuck at borders, he explained:

“The Syrian authorities prevented refugees in Lebanon from returning to Syria on the pretext that they exit the country illegally. Nevertheless, the authorities allowed only those who hold passports-about 60 people- to enter Syria, while the others are still waiting for the Syrian Ministry of Interior’s approval, which in turn waiting for the availability of places in the quarantine centers, where they would be held as those who entered the country previously.”